"I'm not sure," she admits. "It's probably because I have a bunch of playable cards, rather than a deck."

"That's one way to put it," you say as she considers her hand.

"More or less the same reasons," you say. "I got some good removal in pack one and ended up going Black-Red. By the time I realized that the good cards weren't coming, it was too late to change."

"I think your removal's good. That Incremental Blight almost destroyed me."

"Yeah, but some of my cards really don't work well with each other," you say. "I mean, who plays with Goblin Smuggler and Flowstone Surge in the same deck?"

The answer to that question, of course, is you. But considering that Lucy has a Dampening Pulse on her side of the table, you probably have some justification for doing so. It's at least made sure that your Smuggler's ability hasn't been completely useless.

That said, you're fighting a losing battle here. You know that Lucy has a Worthy Cause in her hand, and it's allowed her to trade creatures for life points - easily allowing her to outrace two damage each turn. Fortunately, you've been able to hold her off thanks to blockers like Cinderbones, and you opponent has had to step back and figure out how to approach her situation.

Lucy fiddles with one of her Forests. "This is a tough call," she says.

"I can't decide if I should go all-out on this spell, or if I should leave mana up for any of my creatures' abilities."

"Or Worthy Cause," you point out.

"Or Worthy Cause. Is the Unabridged Cube always like this?"

"Yeah. Having one of each card ever printed does that for you. Boris keeps some headache medication behind the counter."

Lucy thinks for another minute or so. "I'm at eight life, right?" she asks.

She finally reaches a decision, tapping all of her lands and laying a Gnarlid Pack on the table. "Multikicker for five," she says. "That makes it a 7/7."

You fish out a few counters from your bag. "That's certainly one way to go all-out," you say.

"I have exactly twelve lands," Lucy says, "so if I wanted to save mana for Grappling Sundew or Selesnya Eulogist or anything like that, I'd have to leave an extra land untapped. Things would have been a lot easier if I had one more land."

"I take it that you're not attacking, then?"

"I'll think about it. But I'm not attacking you now; you can take your turn."

You briefly consider casting the Fiery Impulse in your hand, but then decide to hold back for a little longer. You untap your permanents and find out that your draw is a Midnight Recovery - not too good, considering that Lucy has drained the best creatures from your graveyard with her Eulogist.

"Okay," you say. "So at the moment, you're at eight life and have no cards in your hand."

"Okay, you're at eight life and have one card in your hand."

"So now the question is, can I take you out this turn? This might be the only chance I have where you can't do anything."

"I hope not," Lucy says dubiously. "You can try, though."

It is the start of your first main phase. Defeat Lucy before the beginning of her next combat phase. 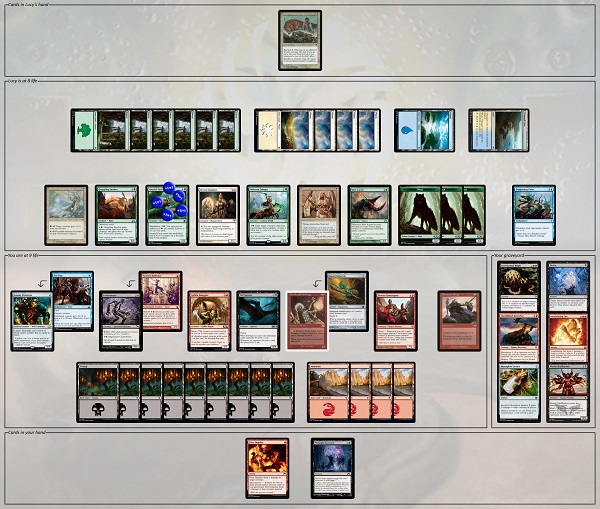 Lucy is at 8 life. She has the following cards in play:

Lucy has exactly one card in her hand:

If you think you've got a great solution in mind, don't put it in the comments! Instead, send it to puzzles@gatheringmagic.com with the subject line "Puzzle - Surge Protector" by 11:59 P.M. EST on Monday, November 11, 2019. We'll include the best ones in next week's article along with the next puzzle!

Despite the ominous Scarecrow presence, solving this puzzle is more of a lifegain issue: Path of Bravery gives your creatures an additional bonus if you're at 20 life or greater, and more life means more activations of Unspeakable Symbol - both of which can help take your opponent down from double digits. But you still need to find a way past multiple blockers, and that's no mean feat.

What makes this board state work, though, is that you have the makings of a nice combo if you can get Path of Bravery's bonus online. To do this, however, you have to manipulate those cards that you have in play: "While the graveyard is full of scarecrows with useful abilities to reanimate," Max Bernstein notes, "we somehow we don't need any of them!"

"It's always a wonderful time in puzzle land when you need to do a significant amount of work in the Declare Attackers step of combat in order to win," Addison Fox muses. "We have the ability to add a lot of power to the board in exchange for a lot of life, but we are only at 8. Thanks to CJ, however, we also have a lot of life we can gain in hand:

"Now that we've resolved all our attack triggers, we need to do some stuff before blockers are declared:

It's also possible that your opponent blocks an attacker other than the Farmstead Gleaner (or even chooses not to block at all), but all this does is give them some overkill damage.

It's worth noting that there's an interesting timing consideration with Farmstead Gleaner as well. The Gleaner will become tapped during your Declare Attackers step, but the attack triggers from Scaretiller, Path of Bravery and Ordeal of Heliod are only placed on the stack after the Declare Attackers step is over. This puts you in a position where you can activate the Gleaner's untap ability in response to these triggers.

"I knew I had to persist the Grim Poppet here," Sean Patrick Keatley observes, "but it took me a little bit to remember that he would survive if I was at 20 or more life, so I had to do that after combat started. I also knew I would need as much life as possible, so I would have to return Scoured Barrens."

With all the Skulkins in the deck, one wonders what the rest of the Scarecrow deck is like. "Mari was right," Max remarks. "With all the color-dependencies these scarecrows have, the more Scarecrones the better!"