Login
0 Item
Advanced Search
Sign In
Create Account
You're barely ten minutes into your first game, and you're already amazed at how much fat Tony has in his deck.

The first thing to appear across the table was a Scab-Clan Giant, which knocked out your Leonin Warleader and became an easy target for your Pacifism. Then you had to play defense against a Gnarlback Rhino for a while, and when Ghalta, Primal Hunger showed up, you were lucky enough to have a Banisher Priest in hand. But when Tony convoked out an Impervious Greatwurm, of all things, you started thinking about shuffling up for the next game.

Against all expectations, however, you've managed to hold the line. Your efforts have left you at a low life total, yes, but Tony just happens to be in the same predicament. In fact, it's forced him to reassess his board situation and give you some much-needed breathing room.

"You should be dancing," Tony groans.

Tony spreads his hands. "I mean, look at this," he says. "I've got a 16/16 indestructible Wurm on the table, and somehow you're staying alive."

You admit that a creature of that size would normally cause you some trouble. However, you got Emiel the Blessed into play a couple of turns ago, and it turns out that blinking your blockers is an effective way to confound a non-trampling attacking creature. The fact that your Wicked Guardian makes an excellent target for Emiel just happens to be a bonus.

"Eh, that's the Unabridged Cube for you," you say. "You find strange solutions to big problems when you're working with one of each card ever printed. And that's with an emphasis on 'big'."

"How can you think straight with this kind of draft? My head was spinning from all the cards."

"You get used to it," you shrug. In truth, you're looking to head off yourself - after spending most of the afternoon at your local game store, you have other things to do on a Saturday night.

You need to finish this match first, though, and that means finding a way to win this game. Unfortunately, the combat route doesn't look viable: As it goes, your Cavalier of Dawn is currently a respectable 5/8, but it's holding off the Gnarlback Rhino at the moment. And even if the Rhino weren't there, you'd still need some way to get past Tony's Greatwurm.

"I'll cast a Lavakin Brawler and then pass," Tony says.

"You're not attacking with that Greatwurm of yours?"

"You're just going to block with Wicked Guardian again, and then use that unicorn of yours. I need a new angle."

"Suit yourself," you say. "At the end of your turn, I'll activate Emiel anyway."

You pay the extra mana for a +1/+1 counter, have Wicked Guardian deal 2 damage to your Cavalier of Dawn (which it easily shrugs off), and draw an Alchemist's Gift to join the Honorable Passage in your hand. Then you untap, move on to your draw step, and peel a Plague Reaver from the top of your deck.

You've almost forgotten about the Plague Reaver, actually. It's from Commander Legends, and it's one of the unpublished preview cards that keeps appearing in the Unabridged Cube every so often. The Reaver's presence is excellent timing: With two other cards in your hand, you can easily activate its ability - and the last time you checked, indestructible doesn't do squat against forced sacrifice effects.

The only catch to the Plague Reaver is that it's going to take a while to be effective. And of course, there's also the possibility that Tony might draw some direct damage to finish you off before his next end step - an Inferno Jet would be pretty bad, for example.

So, when it comes right down to it, maybe you should try and end the game as soon as possible. It might be risky on your part, especially with your low life total, but perhaps there are ways of killing yourself without killing yourself.

It is the start of your first main phase. Defeat Tony before the beginning of his next combat phase. 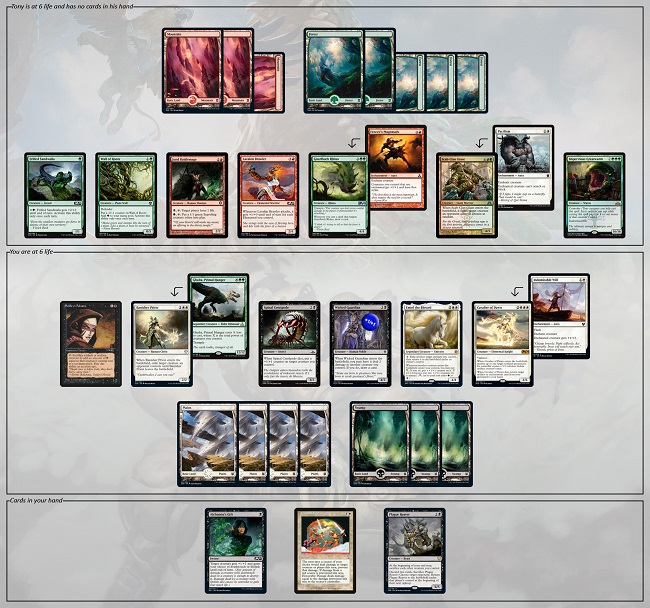 Tony is at 6 life and has no cards in his hand. He has the following cards in play:

Instead, if you think you've got a great solution, you can send your solution to puzzles@gatheringmagic.com with the subject line "Puzzle - Saturday Night Reaver" by 11:59 P.M. EST on Monday, November 16, 2020. We'll include the best ones in next week's article along with the next puzzle!

"The key to the puzzle," Greg Dreher writes, "is that creatures with a given color can't block creatures with protection from that color. Rainbow Crow makes that tricky, but you have a way to give Maddie only one chance to change its color."

"Radiant, Serra Archangel's ability can be activated multiple times," Max Bernstein continues, "and thus she can potentially be unblockable this turn. The only issues are Rainbow Crow and the fact that Maddie actually has 2 mana available despite being tapped out. But as always, sequencing is key!"

Your opponent can draw up to 2 mana from your Devoted Druid, but a little bit of rules knowledge helps here: If you can get Maddie to add the mana during your first main phase, she won't be able to use it during your combat phase. Rainbow Crow can change into only one color at a time, so at that point you can simply give Radiant protection from the appropriate color, and then go to town.

This, as Jake Breen's solution shows, is actually easier than it looks at first glance:

At any time up to this point, Maddie can tap Devoted Druid to add

. In fact, Maddie can even put a -1/-1 counter on the Druid to untap itself, then tap it to add another

. After Matsu-Tribe Sniper does its work, though, the Druid becomes a tapped 1/2 flying creature with 1 damage - at which point Maddie can no longer tap it for mana, and can't activate its untap ability without killing the Druid.

If Maddie added mana earlier, this is now her last chance to use it to activate Rainbow Crow; otherwise moving to the combat phase will empty her mana pool. Regardless of whether Maddie activates Rainbow Crow twice, once, or no times at all, Rainbow Crow ends up being a single color.

Canny players may also note that a more reactive solution is possible. "If you time your last two Radiant activations to just before blocking," Michael Feldman notes, "you can be choosy about the protections, thus only needing four of the five colors:

At this point, all of your opponent's creatures are either blue or green, so Radiant is currently unblockable. Maddie may activate Devoted Druid for up to

Radiant ends up with protection from up to four different colors this way. It's obviously one short of a full spread, but it's definitely enough for nine damage. And beyond all of these shenanigans, it's probably still worth it for your opponent to realize that life just isn't all sunshine and rainbows.