Login
0 Item
Advanced Search
Sign In
Create Account
Maddie considers your Radiant, Serra Archangel for a while. "Now that," she says, "is a real game-changer."

"Well, it costs seven," you say, "so I imagine that it has to give you some return on your investment."

"I've obviously been away for a long while," Maddie says, nodding. "I think I missed all the preview cards that came up with... what do you call this, again?"

"That's it. The one that has one of each card ever printed. And has cards that haven't been released yet."

"If you don't mind my asking, how long has it been since you joined an Unabridged Cube draft here?"

"I think I isolated myself in my dad's farmhouse back in... April, was it?"

"Wasn't that six months ago?"

Maddie shrugs. "I'm trying to remember where it all began, but yeah, it's been a while."

"That's true," you admit. "I heard that unreleased cards were still spontaneously showing up in the Cube, even when there were only three or four people playing in the store. Those must have made for some interesting matches."

"At least now I feel like I just got home."

Maddie thinks for another minute. You can see about a hundred expressions cross her face, which means that your legendary flyer is definitely making its presence felt.

"That Radiant of yours is stopping me cold," she finally says.

You allow yourself a little relief. For a Green-Blue deck, Maddie has a surprising number of flyers, and neither your Matsu-Tribe Sniper nor your flying Resilient Khenra have been able to hold the tide completely. You're actually amazed that you've managed to survive this long.

"Yeah, but I'm not going to wait till you draw something," Maddie says. "Besides, your bomb is already on the table."

"Fair point. That leaves you with just an Island and a Forest."

"I'll use that to cast Nightveil Sprite," Maddie says. "Then I'll play a Lumbering Falls and pass the turn."

"And run into Radiant? No way. I need to think about this first."

"I'm glad I first-picked her, then," you say, untapping your permanents and moving to draw a card. "She's saving my life here."

"Yeah, I'm sure she's got herself a little piece of heaven there."

You draw another flyer for your board - a Kor Skyfisher - and immediately start making plans. Considering that the Skyfisher's a 3/4 creature when you take Paragon of New Dawns into account, that's going to be another welcome presence. For that matter, bouncing your Carven Caryatid for an additional card also seems pretty good.

Then you pause for a moment as the situation starts to dawn on you. You're certainly starting to turn this game around, but it feels like you can certainly do something before Maddie draws into a solution. The only question is... what?

It is the start of your first main phase. Defeat Maddie before the beginning of her next combat phase. 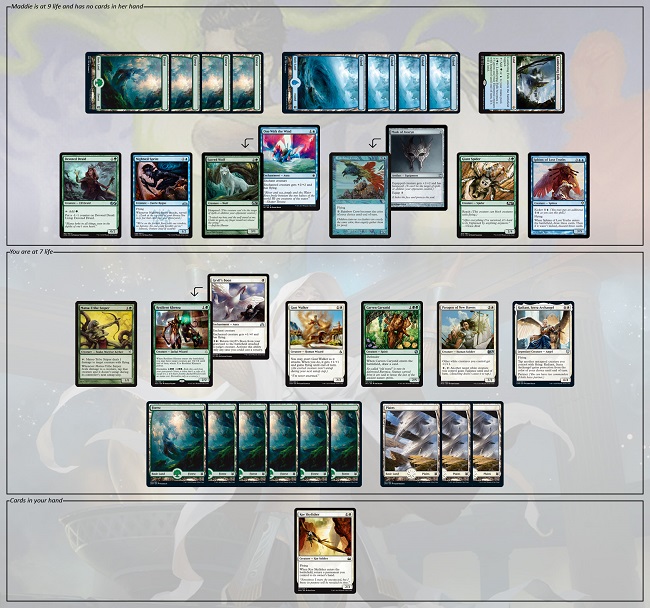 Maddie is at 9 life and has no cards in her hand. She has the following cards in play:

Instead, if you think you've got a great solution, you can send your solution to puzzles at gatheringmagic dot com with the subject line "Puzzle - Ray of Light" by 11:59 P.M. EST on Monday, November 9, 2020. We'll include the best ones in next week's article along with the next puzzle!

"There are a few keys to solving this one," Michael Feldman writes:

"If the approach that suggests itself is to push Chaney to 20 life," Hyman Rosen notes, "the best source of lifegain is to have Dwarven Priest enter the battlefield. The key factor to notice is that Lunarch Inquisitors - the transformed version of Avacynian Missionaries - is also a Human, and therefore will be transformed back by Moonmist. That makes a copied Moonmist not as redundant as it might first appear, and in fact, it saves the day."

As the active player, Chaney can stack those three last triggers in any order he chooses. However, the outcome is the same: Between Inspiring Cleric and Dwarven Priest, he's still gaining a minimum of 12 life.

This solution has one variant, and it's based on your lone evasive creature. Shrill Howler is a 4/1 with Viridian Claw attached, which means that Loxodon Lifechanter is the only creature that can currently block it. You can therefore make the following exchange while your two Moonmists are on the stack:

At this point, the rest of the sequence takes over. Removing Lunarch Inquisitors still brings back Dwarven Priest, which still gains Chaney at least 8 life and causes him to lose to Transcendence.

Chaney does have some consolation, though: At least he knows his deck works, and at least he knows that this defeat is only possible due to a very unlikely interaction between Moonmist and his lone transforming cleric. To be fair, it's not something he can predict - after all, no one expects the Lunarch Inquisition.