Login
0 Item
Advanced Search
Sign In
Create Account
"All right," Joshua says, "should I discard my Pinpoint Avalanche, or my Logic Knot?"

"You might as well be the one who chooses," Joshua says, looking a little annoyed. "After all, they're only stuck in my hand because of your Gaddock Teeg."

"I fail to see the problem here," you say, smiling.

"You don't have to be so smug about it," Joshua points out.

You can't help but feel comfortable with the current situation, though. It's obvious that the current stalemate is working to your favor: You've got a number of tricks on the table for Joshua to consider, Gaddock Teeg has locked down virtually all of his late-game noncreature spells, and he's quickly running out of cards due to multiple Mad Prophet activations.

Something still nags at the back of your mind, though, and that's the question of why your opponent keeps tapping his Prophet. The only answer you can think of is that he's looking for something in his deck, and in an Unabridged Cube tournament that contains one of each card ever printed, that spells trouble.

Back on the board, Joshua finally decides to put Pinpoint Avalanche into his graveyard. He draws a card from his shrinking library, which realizes your fears and turns out to be an Ulamog, the Infinite Gyre!

Now it's Joshua's turn to smile. He taps eleven lands and drops the giant Eldrazi onto the table, then points at your Herald of Serra. "I'll destroy... that," he says.

"Not Gaddock Teeg?" you ask.

Joshua chuckles. "I think I threw away most of my removal already," he says, "and I don't think I'll need the Logic Knot anytime soon. You still have that Prey Upon in your hand, but I'd like to see you try and take down an indestructible 10/10 with it."

You add a +1/+1 counter to your Unruly Mob, and have to admit that his reasoning makes sense. Joshua's Wandering Eye has forced both of you to play with your hands revealed, and you've both been making decisions off the additional information. The problem, of course, is that knowing about his countermagic doesn't quite help you deal with a titanic annihilator from out of nowhere.

"That's all for my turn," Joshua says. "Are you tapping down my Ulamog with your Squall Drifter?"

"It still has summoning sickness."

You untap everything except for your Unruly Mob and add another card to your hand: Clip Wings. That's a convenient enough method to take out one of Joshua's flyers, but it doesn't get you out of the current situation. At least you now have a second spell that can bypass Gaddock Teeg, unlike the Might of Oaks in your hand.

You think for a little while, considering that your Squall Drifter can probably keep Ulamog busy until your opponent's library runs out. But what if Joshua isn't telling the truth about his removal? His taking out the Drifter would mean that you're in for a world of hurt.

Then again, you do have one more option: You could try to look for a way to win this turn before you have to deal with Joshua's next draw. All you need is to find ten damage, which should tie this game up all nice and neat.

It is the start of your first main phase. Defeat Joshua before the beginning of his next combat phase. 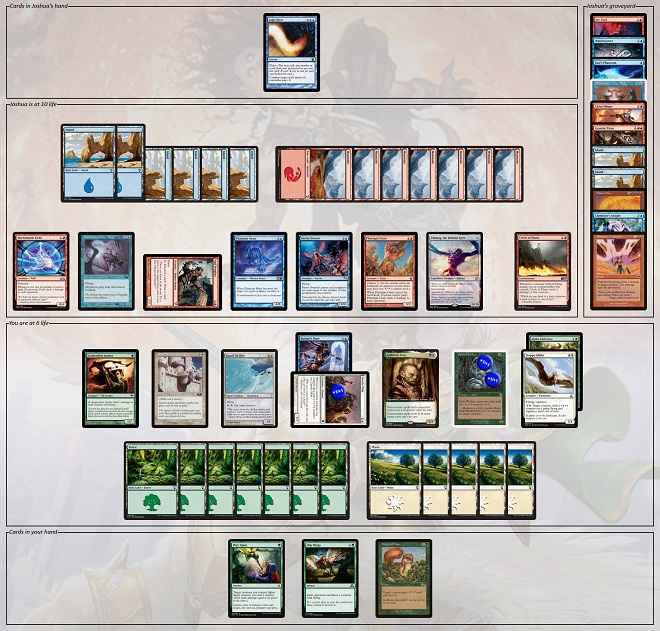 You have not yet played a land this turn. You still have a significant number of cards remaining in your library, but you know neither the identities nor the order of those cards.

Joshua is at 10 life. He has the following cards in play:

Joshua has the following card in his hand:

Joshua has the following cards in his graveyard, from top to bottom:

If you think you've got a great solution in mind, don't put it in the comments! Instead, send it to puzzles@gatheringmagic.com with the subject line "Puzzle - Overhand Knot" by 11:59 P.M. EST on Monday, November 19, 2018. We'll include the best ones in next week's article along with the next puzzle!

"With Jane's blockers," Chris Billard writes, "it looks like the only way to win is to be forced to discard Psychic Purge. Black Cat can do that, but Boneknitter can regenerate Black Cat, so this is not guaranteed to work.

"The key is remembering that a creature taps when it regenerates. That gives you a counter for Palliation Accord, which allows you to target yourself with Psychic Purge and actually win through combat damage. Who knew? (Other than Madame Kostana, of course.)"

"The most critical step to realizing this solution," Frederick Remolana continues, "is to find a way around having exactly 1 life and generating mana for effects to either a) kill Black Cat, discard Psychic Purge, and win; or b) cast Psychic Purge on yourself, survive it, get Dormant Gomazoa to untap, and then win."

. Instead, you need to get your Red mana elsewhere, as Julian Mathy writes:

"This is an interesting moral decision for our opponent," Paul Simpson adds, "only each decision leads to the same outcome. Either they let the Black Cat die and their luck catches up with them (and kills them), or they save the kitten and we beat them to death with a giant jellyfish for their troubles."

"The psychic ability of Madame Kostana might be just an act after all," Ryou Niji notes."The 'danger' she senses is manifold, although every aspect of it is related to Eldrazi Displacer giving us an advantage in the long game: If, for example, we draw a Red or colorless source (or have one spare turn to blink Sailor of Means for one), we can choose to blink one of her two fliers on her turn, blink the other one on our own turn, swing with Snapping Drake, and sacrifice Crackling Triton for the win. This line does give her a few more cards, but she probably doesn't have many cards in her deck that can stop this plan.

"And that Forest? That's just her applying Murphy's Law after realizing her misplay. Her attack didn't leave us with many choices, so the bluffing value of leaving one card in hand is close to nonexistent. Meanwhile, the value of playing Fleshbag Marauder precombat is very real, and as it happens, she just threw away a win waiting on the top of her deck, for a defeat waiting on the top of ours."