Author's note: After over five years writing Magic: the Gathering puzzles, it's time for me to wrap up. My last puzzle in this series will be posted on the 24th of December 2020. This, incidentally, will be my 300th puzzle - I figured that it would be good to end with a nice round number.

I would like to express my deepest gratitude to everyone who has followed this series over the years, from the people who have quietly pondered these strange situations, to the people who have persisted through incorrect solutions. I am humbled to have experienced some remarkable analytical skills and lateral thinking in the course of these puzzles, and I hope that their tradition will continue for future generations of readers.

With that said, we now return to your regular scheduled programming.

"Well, that was a bust," Mari says, dropping Water Servant into her graveyard. "What is this deck of CJ's supposed to do, anyway?"

"I thought it was supposed to be a theme deck."

"If it is," Mari sniffs, "then that would explain a lot of things. Paul?"

"Hmm?" her opponent asks, looking up.

"Did CJ tell you what these decks were supposed to be?"

"I have no clue," Paul shrugs.

To tell the truth, you have no idea what CJ's getting at with the decks that Mari and her opponent are playing right now. Paul's deck seems to be a creature-heavy Black-Red creation that seems to have a lot of Devils and Spirits, but little removal. Mari's deck, on the other hand, defies explanation - if its cards have a common theme, it's not a very obvious one.

"As far as I can tell, this deck seems to revolve around Wizards," Mari says. "But that doesn't explain the Bonesplitter."

"That can't take too long."

"About a truckful of it," Mari clarifies.

"Why on earth would he need that much water?"

"The pipes at his granddad's house burst. Because CJ's CJ, he agreed to help out and then completely forgot about it."

"If you'd have told me that he was out getting water for one of his grandparents," you admit, "I wouldn't have believed you."

"Apparently these things happen," Mari says. "Are you playing anything, Paul?"

"Yeah," Paul says, staring critically at the lone card in his hand. "Remember when you said that this deck was mostly Spirits and Devils?"

"Well, you might want to revise that thought," Paul says, dropping a Lord of the Pit onto the battlefield.

You and Mari stare at it for a little while. "I don't get it," Mari finally says, after a long silence. "I just don't get it."

"It's just a theme," you explain. "We can always ask CJ when he gets back, or when we get around to returning these decks to him."

"It just feels like he's getting one over on me," Mari frowns, untapping her permanents. She draws her card for the turn - a Chain Lightning - and looks over the board. "I don't like it when he does that."

Mari sighs. "Maybe we should just call it a day," she says.

"What I meant was that I'm going to find CJ and get him to tell me what he built these decks for," Mari says. "But before that happens, we're going to finish this game."

It is the start of your first main phase. Defeat Paul before the beginning of his next combat phase. 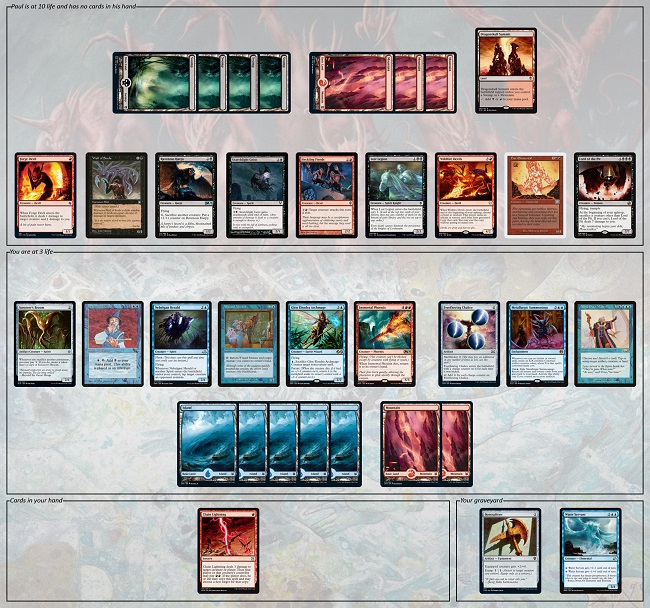 Paul is at 10 life and has no cards in his hand. He has the following cards in play:

Instead, if you think you've got a great solution, you can send your solution to puzzles@gatheringmagic.com with the subject line "Puzzle - Clean Sweep" by 11:59 P.M. EST on Monday, December 14, 2020. We'll include the best ones in next week's article along with the next puzzle!

"It seems obvious that a puzzle featuring Profane Transfusion as your only card in hand (and referenced by the title) would involve you inflicting plenty of self-harm before switching life totals," Michael Feldman writes. "The big trick here is therefore preparing for a possibility that you do NOT use the spell at all and take down all 18 of your opponent's life points naturally!"

"The obvious solution is cheating out Profane Transfusion with your Izzet Chemister," Max Bernstein continues, "but getting your life total (and thus Meredith's) low enough is quite tricky and requires you to read the fine print in your pirate contracts. And that's only half the solution! In a scenario where you don't have to cast Profane Transfusion at all, you instead just Chuck some bodies at Meredith until it's game over."

"Bloodshot Cyclops is the track and field champion of the Magic multiverse," David Arnold notes. "Not only can it shot-put other creatures, but it can also pole-vault itself into a creature or player:

B: The Meredith Committee does not block Eternal Taskmaster.

The fact that Coercive Recruiter and Bloodshot Cyclops are both 4-power creatures lends a little flexibility to your final steps: You could, for example, attach Demonic Embrace to Bloodshot Cyclops instead - at which point you can then have Chuck chuck Chuck.

"What especially threw me initially," Michael adds, "is that the event that could stop you from winning with a life-switch only results in your opponent losing 5 life, barely more than the difference between life totals. However, the life switch requires significant resources to pull off - resources that are better spent on direct damage if your opponent is at 13 life and you don't have Demonic Embrace in your graveyard yet."