You glance at your cards. "Are you sure?" you ask.

You stare at the board again. You're pretty sure that your opponent is approaching you from an angle here, but you're not quite sure what it is. The only thing you can do, really, is go over the circumstances once by one.

First of all, Raffi's definitely attacking you because you don't have enough mana available to regenerate your Loxodon Convert. That said, you've still got ample life and some fair defenses at the moment, so there's no great reason for you to hold up 3 mana for Molting Snakeskin just yet.

Second, it seems likely that Raffi has something that can compromise what you throw in front of the Armasaur. If you block with your 2/5 Bloodletter, for instance, a simple Giant Growth would be enough to overcome both its 5 toughness and the ability of the Healer's Headdress attached to it. The same logic applies if you block it with your Slaughterhouse Bouncer: a Giant Growth would also wreck you if you target the Armasaur with the Bouncer's death trigger, and you're not sure if it's worth using the -3/-3 penalty on any of Raffi's other creatures.

Third, blocking Raffi's Armasaur will give him at least one Saproling token regardless of what creature you use. It's not much, but the table's already crowded enough as it is.

"So, are you blocking?" Raffi asks.

You consider the situation one more time. "No," you finally say. "I'll just tap Bloodletter to prevent one damage to myself. I'll take the remaining three damage and go down to eight life."

You shrug. "I was expecting a combat trick, that's all."

Raffi laughs. "I was expecting you to expect a combat trick," he says.

"That makes sense, I suppose."

"It took me a while to get used to this Unabridged Cube," Raffi says. "One of the things I've seen, though, is that even when you have one of each card ever printed, that doesn't stop some of the common strategies. For the most part, you should still attack before you cast anything. And you can still make people think that you have something in your hand, whether you really have it or not."

You nod and start untapping your permanents. You wonder if Raffi has any more ammunition in his deck, or if he's starting to play bluffs on you because he doesn't have anything worth considering. That, of course, makes you wonder if Raffi's actually does have something, when he's trying to make you think that he doesn't have anything. It's all very complicated, and for a moment you don't notice that you've added an Unhallowed Pact to your hand.

For a moment you're tempted to pass the turn and make him think you've got something worth worrying about, but that feeling passes quickly. After all, you don't really need to deceive Raffi when you have other perfectly serviceable plays at your disposal.

It is the start of your first main phase. Defeat Raffi before the beginning of his next combat phase. 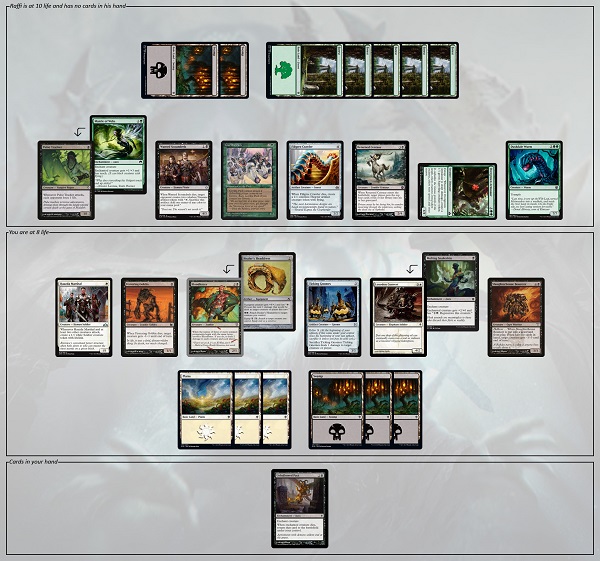 Raffi is at 10 life and has no cards in his hand. He has the following cards in play:

If you think you've got a great solution in mind, don't put it in the comments! Instead, send it to puzzles@gatheringmagic.com with the subject line "Puzzle - The Beginning is the End" by 11:59 P.M. EST on Monday, December 30, 2019. We'll include the best ones in next week's article along with the next puzzle!

"The main constraint on this puzzle is that we have to win through non-combat damage," Sevi Alvarez explains. "The only card available that can deal immediate non-combat damage is Fling. From there, it just becomes a puzzle on how to get the biggest creature possible. Luckily, Thornscape Familiar is a workhorse in this scenario."

This route has two variants, but the logic remains the same. "This one utilizes almost everything that you have, which is fun," Sean Patrick Keatley writes. "The cost reducer definitely comes in handy:

The other option is to Fling the next largest creature you have on the table, which, as Sevi points out, is the Stocking Tiger itself:

"At this point," Russell Jones writes, "Dread Slaver triggers and brings the Tiger back, tapped, under Danielle's control and with a brand-new booster pack! (Okay, maybe not 'brand new': You happen to have this Fallen Empires pack you've been holding onto for the last 25 years, just for the novelty value, and you'd gladly let it be the stupid pack that accompanies her incarnation of the Tiger.) But then Fling resolves and deals 16 to the dome, ending the game and not letting Danielle unwrap her present. What a snow miser."

Then again, as long as you have fifteen cards in your hand, you might as well use as many of them as possible. Hyman Rosen's solution has the added bonus of using Torbran (not to mention finding a way to actually cast him), and puts you within the 16-damage threshold as well:

"Danielle's not having a great time," Addison Fox observes. "The expected value for 'cards we can cast out of a random booster pack' in a two-color deck is maybe three or four, and most of those cards usually won't win a game. Unfortunately, not only did we crack both relevant pieces of fixing to let us cast some of the off-color cards, we also just 'drew' fifteen cards to turbocharge one of them."

"And of course," David Arnold adds, "It's an open secret that every centaur is actually just two elves in a horsey suit."