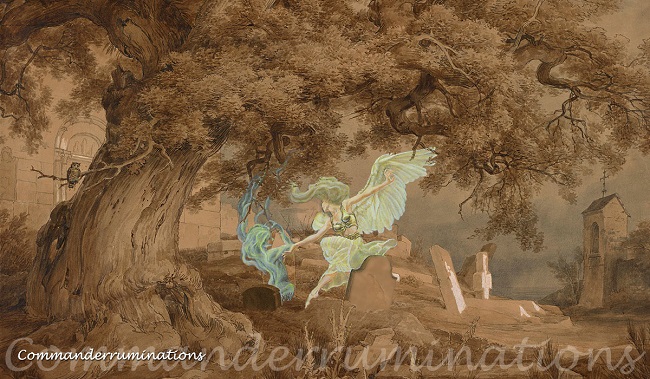 Landscape with a cemetery and a church by Karl Friedrich Lessing (1837).

As we here at CoolStuffInc.com work through some of the legendary creatures from last Fall that we didn't cover, I was surprised to find that Colfenor, the Last Yew had somehow never been the subject of one of our columns. When this legendary Treefolk Shaman was first spoiled, I was eager to explore the reanimator potential of this creature. I know it can combo and I'm very curious as to what sorts of hijinks I can get up to building around Colfenor.

Not only does this Treefolk have vigilance and reach, it's also a 3/7. Whenever Colfenor or another creature I control dies, I can return up to one other target creature card with lesser toughness from my graveyard to my hand. If I want that creature on the field, I'll still have to cast it, so there are some hoops for me to jump through, but like a lot of today's Magic card design, it feels like this card is putting the training wheels on the deck-building process. It shouldn't be that hard to find a way to win the game given that we're in White, Black and Green. Those colors already have powerful cards that play in the sphere of sacrifice and reanimation, so I think today we're going to be "cooking with gas".

This Beast is so dangerous it spent years on the Commander banlist, only becoming legal again when the highly problematic instant spell Flash got banned. When Protean Hulk dies, if Colfenor is on the field not only will I be able to put a creature with toughness 5 or less into my hand from the graveyard, I'll also be able to tutor up any number of creature cards with total mana value of 6 or less and put them onto the battlefield. This card is just silly powerful in the right build.

There are two directions I thought about when building Colfenor. Both builds would involve setting up a combo to allow you to cast a creature for free and create a loop that will give you as many cast, enter-the-battlefield and death triggers as you need to win the game.

The version I didn't put together for you today is an artifact version that would use cards like Foundry Inspector and Jhoira's Familiar to make low CMC artifact creatures free to cast so I could run that loop for no extra mana. I wrote about Hamza, Guardian of Arashin last week and that build was centered around artifacts, so for Colfenor I really wanted to do something a little different.

I think I might have found a Colfenor build unlike any you'll have come across.

The Path to Victory

Much like when I built my Ramos, Dragon Engine combo path, this deck is going to have to have a few things on the battlefield before it will be able to launch into my combo. Because I'm building around Protean Hulk, I've got some flexibility in how this plays out, but I'm going to assume that I've got Protean Hulk and some sort of sacrifice outlet on the battlefield. This deck runs six ways I can sacrifice my Hulk, but I could see adding in High Market and another one or two if I'm not reliably drawing into them.

It's worth remembering that if Colfenor, the Last Yew is on the field, every death trigger can put a creature with lesser toughness from my graveyard into my hand. I won't mention it every time, but it could be important depending upon what happens to be in your graveyard.

You start out by sacrificing Protean Hulk. You tutor up either Karmic Guide or Phyrexian Delver, both of which cost five mana, and you also get Plated Sliver, which has a mana value of 1.

Yes, you read that correctly. This might not be a Sliver tribal deck, but this combo is made possible by the one and only Sliver tribe!

Karmic Guide and Phyrexian Delver are interchangeable. Either one can bring your Protean Hulk back to the battlefield, though the latter will cost you six life. Plated Sliver is a 1/1 that on the battlefield has 2 toughness.

With your Protean Hulk death trigger you tutor up two more creatures.

Muscle Sliver is 2 CMC Sliver that give your Slivers +1/+1 and is interchangeable with Predatory Sliver and Sinew Sliver. Academy Rector is a creature you will immediately sacrifice to tutor up the enchantment Aluren and put it on the battlefield. With Aluren on the field any player can play creatures with a 3 CMC or less for free and at instant speed. Yes, this can backfire on you, but chances are good that your opponents won't be ready to combo off and win.

With Aluren out you can now loop your slivers, sacrificing one to use Colfenor to recur the other from your graveyard to your hand. When they're on the battlefield they'll have a toughness of at least 2, but in the graveyard they'll have a toughness of 1. A Sliver's ability only affects other Slivers that are in play. If someone tries to interrupt your loop, you can respond by continuing to loop your sacrifices and castings. Aluren allows you to cast creatures at instant speed, so you keep putting your combo on the stack, not letting spell that would foil your plans from resolving

Looping your Slivers is a neat enough trick, but it's not going to win you the game on its own. Fortunately, this deck has plenty of payoff cards.

There are creatures that will simply kill the table if you're able to loop enough death triggers together. Zulaport Cutthroat is the Standard for this effect, but Cruel Celebrant, Falkenrath Noble, and Poison-Tip Archer will all do the job as well.

If you can't kill the table right away, there are cards that will let you create an infinitely large army. Elenda, the Dusk Rose and Requiem Angel join Tormod, the Desecrator as creatures that can build your army. Abzan Ascendancy will give you 1/1 White Spirit creature tokens with flying for each of your death triggers. Desecrated Tomb will give you 1/1 Black Bat creature tokens with flying when your Colfenor triggers pull creatures back out of the graveyard.

The deck also runs the usual card draw staples like Beast Whisperer, Guardian Project, Lifecrafter's Bestiary, and Greater Good, though the latter's discard requirement will make it less effective if you've only got a board of 1/1 creatures on the field. Black Market, Pawn of Ulamog, and Pitiless Plunderer will help convert sacrifices into mana, though if you're looping using Ashnod's Altar or Phyrexian Altar that won't be a problem as you'll be gaining mana as you go.

I'm also running a handful of anthem effects, because that might set me up to be able to loop with Aluren even if my precious Slivers are nowhere to be found. Two creatures with identical power and toughness will be able to get each other back from the graveyard so long as I've got an anthem on the field.

It's worth noting that my list reflects my playstyle and I'm missing cards that some of you would view as staples. Fleshbag Marauder, Merciless Executioner, Plaguecrafter, Butcher of Malakir, and Grave Pact all didn't make the cut into my list. Forcing your opponents to sacrifice their creatures is a very powerful strategy. I find it pretty miserable to play against so I tend to lean away from those types of cards. A Colfenor deck with an +1/+1 anthem effect on the field could loop Fleshbag Marauder and Merciless Executioner, using one's death trigger to let you bring the other back to your hand. If Aluren isn't out it will require spending some mana, but most decks would have a hard time keeping up with even a non-infinite loop of those types of creatures.

This might actually be a more powerful deck if built around artifacts or if I built this with those Fleshbag Marauder force-sacrifice creatures, but I really enjoy trying to make my decks interesting and different. I don't know if anyone else stumbled upon my "Sliver solution" to the challenge of how to combo off with Colfenor, but I'm happy with how this list came together.

I have to wonder if this deck would be more interesting if I loaded it up with Slivers and abandoned the combo gameplan. The core of this build is having enough payoff cards that you'll nearly always have something useful on the field (or in the graveyard) when you're ready to combo off. The combo doesn't have to start with Protean Hulk, but I enjoy building decks that can spiral out of control from just one card. Protean Hulk is just that kind of card and it's no wonder that it spent so long on the Commander banlist.

If you wanted to tune this deck up, you'd probably want to add some fast mana, tutors and low CMC interaction. This is not really a fringe cEDH decklist, but with the right upgrades I think it could play at those high-powered tables. Not being in Blue, it's hard to deal with some of the wincons at the top end of our format, but you could get this list tuned up enough that it could play and even steal the occasional game. You'd probably drop out a lot of my redundant payoffs and anthems and really focus down on a few key interactions as your path to winning the game. Competitive EDH is all about efficiency.

When I build a deck, I sometimes find it fun to go back and look over the list. Not only do I see my "fingerprints" on it, such as the lack of Fleshbag Marauder and his cousins, I also see evidence that I built the deck with a relatively casual mindset for a combo deck.

This list is in Abzan colors, but not only did I not include Diabolic Tutor, I didn't include Demonic Tutor, Grim Tutor, or Vampiric Tutor. Some players swear by tutors and others never run them just on principle. This is a combo deck that has an optimal gameplan that revolves around having Aluren on the battlefield. It should absolutely include tutors if you're considering playing it at a high-powered table. It should also run Grand Abolisher so you can lock your opponents out of your turn when you're going for the win and Riftsweeper if you're concerned with someone exiling Aluren. Aetherflux Reservoir would also play well in this list, as you're going to be able to storm off with all those free creature castings you're getting with Aluren on the field.

I haven't had a chance to play this list yet, but if you've built Colfenor I'd love to hear your thoughts.

What do you think of my Sliver solution or my assessment that artifact combo is probably the best way to approach this commander?

Are there any Colfenor staples that I missed out on in today's column?

That's all I've got for now. Thanks for reading and I'll see you again soon!