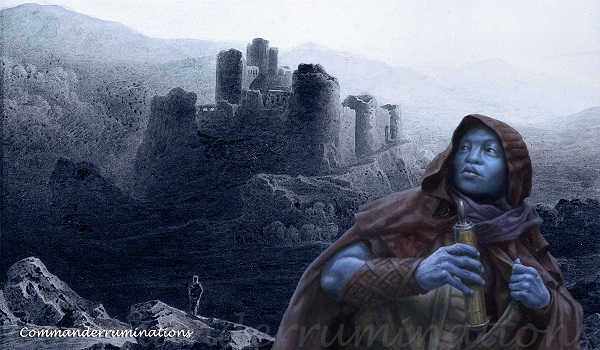 Strixhaven is upon us, but I'm taking one last dip into Commander Legends to explore an idea I found just too interesting to resist. The Commander writers at CoolStuffInc.com have been banging out columns on the many legendary creatures thrown into our format last Fall and there are only a few remaining for us to cover. The day after I turned in my most recent column, I took a look through our shared list and saw two Elves that caught my eye.

Black Elves aren't a new thing, but the idea of building a partners deck, building it around Elves, and then choosing to make the deck Mono-Black struck me as pretty silly. If you're building Elves, you want Green. There are just too many good Elves in Green to pass that color up. Building an Elves deck without Green is almost like building Goblins without Red or Wizards without Blue. It doesn't make a lot of sense, but it begs the question...

What kind of Mono-Black Elves deck could be made now that we've seen the printing of a bunch of new Black Elf cards?

If this deck is going to be led by Miara, Thorn of the Glade and Nadier, Agent of the Duskenel, I should start by taking a good look at what they bring to the party.

Miara cares about Elves. That bodes well for my plan to build this as an Elf deck rather than some other sort of deck with a few Elves thrown in. When another Elf I control dies, I can pay a mana and a life to draw a card. I don't love that math, but it's card draw and it's on one of my commanders so I can't complain.

Nadier costs a hefty six mana. That's not good at all, but maybe Nadier's ability will make it worth that high cost. When a token I control leaves the battlefield, Nadier gets a +1/+1 counter. That's fine, but his second ability is where things get interesting. When Nadier leaves the battlefield, I get to create a number of 1/1 green Elf Warrior creature tokens equal to his power.

At the outset, I'm seeing Miara as a way to get to where I want to go, and I'm seeing Nadier as the card that will hopefully give me enough of a payoff that I can threaten to win the game on the back of that last ability.

A Cast of Dozens

My first step wasn't actually to look at my commanders. I already knew I was going to try to make a Black Elves EDH deck work and I knew I was going to be centering the deck around those two legendary creatures. What I didn't know was whether I'd be forced to play Shapeshifters and tons of non-Elf creatures just to make the deck work. I was going to title this section "A Cast of Thousands" but this is a 100-card format and the surprise is that we actually do have an impressive number of mono-Black elves to run in this deck.

A search for creatures with the subtype "Elf" who do not have White, Blue, Red or Green in their casting cost brings back 36 results. Once a few extra results like tokens, the tribal instant Eyeblight's Ending, and cards with Green symbols in the text box were removed, I still had over two dozen creatures to pick from.

I chose to leave out the legendary Elf, Maralen of the Mornsong. That Elf Wizard would allow my opponents to tutor instead of drawing a card at the beginning of their turns. While Maralen can lead a fun and interesting deck, it has way too powerful an ability to mix into today's brew. There are lots of Elves that did make the cut though.

Ayara, First of Locthwain might not trigger when Nadier's 1/1 Elf creature tokens hit the field, but this deck should be able to play enough Black creatures to make an impact if she sticks around very long. I might not be running 100% Elves, but Elvish Dreadlord should be able to put some real pressure on any opponent running smaller creatures. If I can generate an army of creature tokens, Nadier's Nightblade will make a boardwipe really hurt. Nightblade will trigger if my army gets destroyed or exiled, so once this deck gets a critical mass of tokens even a Cyclonic Rift or Settle the Wreckage could kill the table and win me the game.

One of the things I look for when evaluating the viability of a tribe, or even a subset of a tribe as in today's experiment, is a variety of support abilities. Elderfang Ritualist has a death trigger that will return another target Elf card from my graveyard to my hand. It's not quite Eternal Witness level recursion, but in a deck with this many Elves it ought to do work. Exquisite Huntmaster will give me a 1/1 token when it dies, but it has encore so I can get a token copy for each opponent I have once it has found its way to the graveyard. Eyeblight Cullers is also in the list and will give me three 1/1 green Elf Warrior creature tokens when it dies.

This deck has plenty of ways to create elf tokens. Skemfar Shadowsage will either have each opponent lose X life or I can gain X life. That will undoubtedly be a lot thanks to our Elves and if things play out right, this card can simply win me the game.

If I seem optimistic about my ability to create lots of Elves, there's a good reason for that. I've got a plan to squeeze as many enter-the-battlefield and/or death triggers as I need out of my Elves. You don't have to build this list with a combo finish. If combo is a thing you are comfortable playing with, there's a pretty sweet one you might want to use Miara's card draw ability to try to dig for.

Nim Deathmantle can combine with certain creatures and sacrifice outlets to create wonderful loops where a creature gets sacrificed and brought back to the battlefield again and again and again. Some of these loops can generate infinite mana. With the right cards on the field, some can just kill the table outright. With Nadier creating Elf Warrior tokens equal to his power when he leaves the battlefield, it is a great candidate for this kind of combo. Nim Deathmantle gives the equipped creature +2/+2, so the loop would create infinite mana with Phyrexian Altar even though that sacrifice outlet only gives me 1 mana (of any color) for each creature I sacrifice.

Once I've got infinite mana, I could then loop other creatures that do other interesting things. If I can create a mana-positive loop, I should also be able to create a creature-positive loop so that I can make an arbitrarily large Elf army. Remember that if Ayara, First of Locthwain is on the field, looping any Black creature can just kill the table. Syr Konrad, the Grim would be a good fit in this list as well, though I didn't include him in this first draft.

With a card like Coat of Arms on the field, or an equipment like Strata Scythe, even a small number of Nadier leave-the-battlefield triggers could give me a pretty impressive army. Both of those artifacts could make Nadier much, much bigger than five mana.

The math is actually pretty fun. Let's say you have five Elves, including Nadier. Coat of Arms would turn him from a 3/3 to at least a 7/7 assuming no opponents have Elves. If you were to sacrifice Nadier to Ashnod's Altar you'd make seven more Elves and you'd have a total of 11 once Nadier was back in the command zone. Replay Nadier and he'd be a 14/14. Even without Nim Deathmantle you could build up a pretty decent army. You'd still need Black mana for Nadier's casting cost, but this is still some sweet, sweet synergy to work with.

Running Grave Pact would force your opponents to sacrifice their creatures as you sacrifice your own. It's very strong, but not how I like to play. I really dislike playing against forced sacrifice, so I don't generally play it myself. That doesn't mean you shouldn't play it, as it's very strong and can definitely win you games or at the very least, make it so your opponents are unable to maintain a boardstate.

This list is running a healthy amount of removal, including a few creatures that are most decidedly not elves. Even if I call Massacre Wurm their mascot, it's clear I haven't built a pure tribal deck today. I think you could do so and have it work, but I couldn't resist including Gray Merchant of Asphodel and Crypt Ghast. Swapping those two out for maybe an Extraplanar Lens and Exsanguinate or Rise of the Dark Realms would be an easy way to keep the deck interesting but move towards a build that only includes Elves.

I suspect this list could use more recursion and graveyard interaction. Also, Buried Ruin would be a good fit if the Nim Deathmantle game plan turns into the main focus of the deck. I don't know if that would be a good thing or a bad thing, but the reality is that every meta and every player is different. You might love combo and enjoy digging for the key pieces you need to start doing silly, loopy things with your Elves. You might prefer to win the old-fashioned way and try to only win your games in the trenches. You might even be the kind of player who is only truly happy if your opponents roll their eyes at least two or three times a game when you land your Grave Pact or Butcher of Malakir and start flushing your own creatures into the graveyard.

The wonderful thing about Commander is that we've been given so many options to build around that we can explore all of these playstyles and find what works for us. We can even build mono-Black Eves, and even a few years ago I'm not sure that would have been a viable plan for an EDH deck.

I'll be the first to admit that I'm definitely prone to falling in love with weird commanders and odd decks. When I built Najeela, the Blade-Blossom I didn't go for the cEDH version but instead built a Goblin Warrior tribal build so I could lean on Red to make my mana work more easily. I even ran Goblin Piker in that list for a while, though it didn't take long for me to swap it out for a Warrior that actually had an ability in its text box.

I have a Syr Konrad, the Grim deck that I've been working on, but it hasn't seen much play. In part that's because of the pandemic, but in part it's because I'm just not that excited about it. I like the idea of building Syr Konrad with neat tricks to kill the table but as I wrap this column up I'm thinking quite seriously about scrapping that list and building Black Elves instead. I've wanted to set myself up to have at least one deck of each mono-color for a while. I am going to get a few games in with my not-well-tuned Konrad list, but I'd bet even money that it will eventually turn into a Miara / Nadier partners deck before too long. It just looks like way too much fun and I just haven't been playing Konrad when I do have the chance to play.

That's all I've got for now. Thanks for reading and I'll see you back here soon!