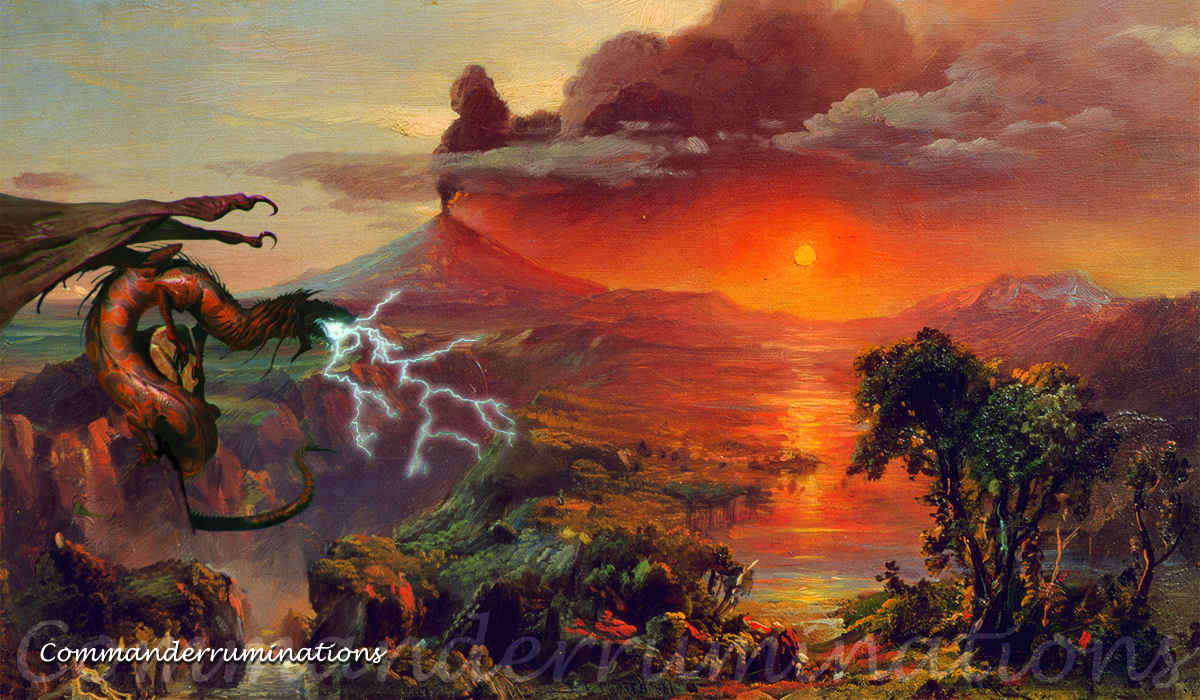 I got so much trouble on my mind

Hear this Dragon get wicked!

I probably should have titled this column "Welcome to the Velodome".

What is a Velodrome again? Gimme a second...

It's a cycling stadium???

OK. Now I'm going to have pictures of dragons riding bicycles going through my head for the rest of this column. Well, whether today's legend is chock full of "ways to blaze your brain and train ya" or will just leave you wondering why a Dragon would get into competitive cycling, I'm going to do my best to break the Red/White Velomachus Lorehold wide open.

This 5/5 Legendary Dragon has Flying, Vigilance and Haste, making me wonder if a go-wide build with Odric, Lunarch Marshal might be in order. It also has the kind of party trick that makes me think of Narset, Enlightened Master so I'm very interested in seeing how strong a list I can brew today.

That second ability lets you look at your top seven cards when you attack and cast an instant or sorcery with a mana value (CMC) equal or less than Velo's power without paying that spell's mana cost.

They must have learned their lesson from Narset - you don't get to cast more than one. You are also limited to Red and White, so Blue extra turn spells aren't on the menu at the Velodrome. Do Velodromes even have lunch counters or food courts? Well, I suspect scaly, winged cyclists would probably work up an appetite so let's just say yes and move on.

This deck is going to be an experiment in finding out whether a commander like Velomachus Lorehold can successfully accomplish Narset's best party trick. That trick is to swing once and nobody else actually gets another turn because you end up killing the table before all is said and done. Narset does it with a mix of extra turns and extra combats, but it's not going to be quite so easy for "Velo".

The first thing I'm going to do is run every single extra combat step Instant and Sorcery available to me.

These spells will get cast at instant speed even if they are sorcery spells, as Velomachus Lorehold's trigger will override that timing restriction. Normally you may not cast a Sorcery while in combat, but "you may cast an instant or sorcery" takes precedence here.

These aren't that complicated - the three spells shown above along with Response // Resurgence, Relentless Assault, Waves of Aggression, World at War and the last gasp instant extra turn spell Chance for Glory all can give me another chance to go to swing at someone. Chance for Glory is notable because with that Instant I'll actually get an extra turn, but I'll lose the game at the end of the extra turn. This deck plays in the red zone, with the goal to win by combat with your commander. If you can untap, play the right spells, and swing into some more combat steps, I think it's a risk worth taking.

While Velo will only let me cast Instants and Sorceries for free, it's worth running additional extra combat options. Fortunately, there are great cards to help with my game plan.

With all of the permanents and spells in today's list I'm looking at around 15 ways to take those extra combats. Eight of those are instants or Sorceries, so when I do the math, I think things aren't looking great. If I'm looking at the top seven cards each time Velo's attack trigger happens, I'd want at least 15 Instants and Sorceries that give an extra combat to have that critical mass to have a good chance at hitting one every time I attack. I've got half that number.

Fortunately, there are a few tricks I learned from my years of playing Narset, Enlightened Master that may help Velomachus Lorehold out.

Both Lithoform Engine and Strionic Resonator will give me one chance each turn to double my attack trigger. That might not seem like much, but digging seven cards deep twice to try to hit an extra combat is actually pretty good.

Neither of those artifacts help with extra combat steps spells that are stuck in my hand, but those next two handle that challenge quite nicely. Scroll Rack will let me swap any number of cards from my hand with that many cards from the top of my library. Penance will let me just plop a card onto the top of my library any time I like. If used one of those tricks and I know I'm going to swing into an extra combat, I can choose to use Lithoform Engine to copy that extra combat spell.

Another way to get extra Velo attack triggers is to have extra copies of my big Dragon. Helm of the Host is a 2-card wincon with Aurelia, the Warleader, but even if she doesn't make an appearance, it's going to feel pretty good to swing with two, three or four copies of Velomachus Lorehold. There's never a guarantee that things will work out, but all those extra attack triggers should really help my chances of hitting an extra combat step.

I should note that there is a pretty big temptation to run cards like Fork, Reiterate, Reverberate, and Dualcaster Mage so that I can copy any of those precious combat step spells. They would be an interesting way to try to squeeze more value out of this deck's game plan, but I don't want to drop out any boardwipes, targeted removal, ramp or pump to make room for spells that on their own don't really do that much.

You might think I want to increase my commander's power to increase the chances that I'll be able to cast the spells I'm revealing off the top of my library. That attack trigger does care about Velo's power, but it turns out that my extra combat step instants and sorceries are all five mana value and under.

Commander's Plate will give +3/+3, putting Velo into 3-hit territory and will give protection from Green, Blue and Black. Conqueror's Flail will give +2/+2, and will lock my opponents out of my turns, so they won't be countering any extra combat spells. Slayer's Stronghold is just a land, but having that +2 boost available is important enough to me to put it in the list.

The meager +1/+1 from Spirit Mantle isn't much but having protection from creatures will let me swing freely at anyone I like. For more significant pump I'll lean on cards like Blackblade Reforged and All That Glitters. Getting +1/+1 for every land I control or every artifact and enchantment I control should put Velo up into 2-hit range. I doubt I'd ever be one-shotting anyone, but with a well-timed Dockside Extortionist or enough Smothering Tithe treasures I don't think it's impossible.

Filling in the Gaps

It seems like Wizards has embraced a clever way to get us to stop complaining about Boros.

They're simply having us start to call it Lorehold instead.

At seven mana, Velomachus Lorehold is never going to be a fast, high powered deck. Modern EDH has been seeing decks get more and more efficient. This commander will struggle at truly high-powered tables but that doesn't mean it isn't worth building or playing - you just have to know what kind of game you're getting yourself into. If there's a ton of removal or the game is a short one, you'll have a rough time.

To help with that, my list is running more than my usual number of boardwipes and I haven't skimped on targeted removal either. I've thrown in a handful of interesting creatures to help with pump and protecting Velo and I've pretty much embraced the reality that this is a voltron commander damage deck. If that plan is stopped and I'm not able to work some magic with Aurelia, the Warleader or Moraug, Fury of Akoum, I'm probably going to have a rough game. Still, for a build that's stuck in Boros... er... Lorehold colors - I think this could be a lot of fun and when it works it'll give you the same kind of wild aggressive game that Narset can provide.

My land count is probably a little too low. I've always built my decks this way and for the most part I'm comfortable running that risk but that doesn't mean you shouldn't tweak this until it runs smoothly for you. I did throw in Mana Vault and Mana Crypt, but I'm leery of including Jeweled Lotus or going with too many mana rocks. My hope is that if things get out of hand, I'll be able to wipe the board and my real game will start coming together after that turn six or seven boardwipe. If someone else wipes the board, that's fine too, but having a seven MV commander means there's no way around having to plan for a longer game than usual.

I really don't understand why Velomachus Lorehold was designed as a seven-mana commander.

At just one mana less, even if it had to come at a lower power and/or toughness, it would make Velomachus Lorehold an exciting new option for players looking to build aggressive combat decks in Red and White. At such a high casting cost, Velo feels like yet another in a long line of disappointing cards that continue to make the weakest colors in EDH feel like they are barely worth playing.

At least we're not complaining about "Boros" any more...

The other direction I could have taken today's build was to load up on huge Instants and Sorceries and just plan to try to pump Velomachus up so I could swing and cast ridiculous spells like Storm Herd.

Get my commander up to 10 power, attack and make X 1/1 white Pegasus creature tokens with flying? Yes please! I'm in the right colors to be able to play Impact Tremors and Purphoros, God of the Forge so a token-generation strategy might be a fun experiment.

If you've decided to make Boros great again with this tricky new commander, I'd love to hear what you decided to do with it. Did you solve the high MV problem? Am I crazy to try to replicate the amazing magic of Narset with this list? Did my plan make about as much sense as a Dragon riding a bicycle? Let me know in the comments!

That's all I've got for today. Thanks for reading and I'll see you back here next Monday!