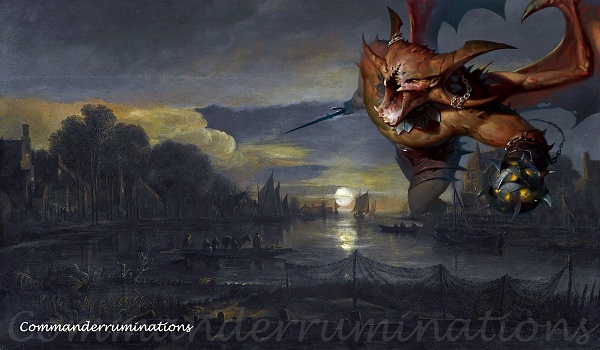 Greetings! I've got a really interesting deck to share with you today. It's a mono-Black build that looks to turn lifegain into flying Demons. Isn't that wholesome? It's led by Tivash, Gloom Summoner and should have you looking forward to each of your end steps. Will you keep the life you've gained? Do you need to make a flying Demon to protect or attack your opponents with? Will your new pet be a pipsqueak or big enough to spend the Night on Bald Mountain?

This 4/4 Human Warlock has lifelink and an interesting ability. On your end step you get to pay life equal to the life you gained this turn to create an X/X Black Demon creature token with flying. You have to add to your life total prior to the end step and if you both gained AND lost life during the turn, you can pay life equal to the amount that you had gained. You can't pay less life than the amount you gained.

This deck is going to be built around lots and lots of ways to gain life, but we'll often be losing that life again to make our Demon tokens. A lot of Black's card draw requires the loss of life, so this approach should also help me put cards in my hand.

I've seen decks built around loading up the board with flyers that work really well. My hope is that this unique approach to making an army of flyers in Black will result in an interesting and sometimes potent casual Commander deck. We're mostly playing fair today - I'm not planning on walking you through any infinite loops for this decklist.

There will be some very familiar faces in today's list. Black lots of creatures with lifelink and with the ability to gain a bunch of life. I was tempted to load up on low-cost cards like Child of Night, but they pale in comparison to the kinds of creatures that really make an impact in Commander.

I'm still going to run Vampire Nighthawk, along with Gifted Aetherborn, Vampire Cutthroat, and Vampire of the Dire Moon. I've grown to love deathtouch blockers, so these guys will be able to help me defensively as well as offensively. Ayara, First of Locthwain will both give me life and have my opponents lose life. It can also let me sacrifice Black creatures to draw cards.

An all-star in this list will be Gray Merchant of Asphodel. In Mono-Black, I should have a decent number of Black "pips" (mana symbols) on my battlefield. At a four-player table with just Tivash, Gloom Summoner and Gray Merchant in play, I'd be dinging my tablemates for three life, gaining 9 life and then possibly paying 9 life to put a 9/9 Black Demon creature token into play. Chances are quite good I'll have games where "Gary" will net me a much, much larger Demon for my trouble. If my tablemates decide that they don't want me to have that extra threat and someone removes Tivash before my end step, I'll simply get to keep all that extra life. The main plan is to make demons, but life gain can be really helpful.

I used to joke when playing my Goblin decks that Staff of the Flame Magus was my secret wincon. This is a mono-colored deck playing only one type of basic and one color of spell, so if Staff of the Death Magus hits the table early and gets ignored it could give me a 10 or even 20-point bump to my life total over the course of a game. That incremental gain can of course be turned into Demon tokens with Tivash on the field.

Vito, Thorn of the Dusk Rose will turn my lifegain into lifeloss for my tablemates. In this build that could be huge, but Vito can also give my Demon army lifelink until end of turn, leading to yet more Demons for me to play with.

Aetherflux Reservoir is the biggest no-brainer in the list this side of Gray Merchant of Asphodel. If I string enough spells together I can make some truly colossal Demon tokens, and if I want a Death Star to shoot an opponent with, I can always just keep the life and not make another Demon. Using the Aetherflux death ray is predicated upon being over 50 life, but with flying and deathtouch blockers and a deck built around lifegain, there's a good chance I'll be able to reach that not so lofty number.

Wumpus for the Win

This deck has a handful of little lifegain creatures, but I didn't go all in on that plan. Not only do creatures like Child of Night not scale up to Commander well, but they also take up space I needed for my real plan. That plan is pretty simple: combine cards like Thrashing Wumpus with equipment that gives lifelink.

Running an assortment of creatures that can push out damage to all of my opponents or to all players like Crypt Rats will give me a powerful threat if I'm at a higher life total than anyone else at the table. If I were able to make infinite mana, it could simply mean game over. I might be able to make boatloads of mana with Cabal Coffers and Urborg, Tomb of Yawgmoth, so that could end up being a viable wincon.

I'm not sure how Crypt Rats would wield a Loxodon Warhammer, but if I can dish out damage to everyone and gain life equal to the damage dealt, I'll either be set up with a pretty big Demon or I'll have a nice boost to my life total. Either one is good and hopefully I'll be able to do the one I need for the position I am at in the game.

I could just keep Tivash on the sidelines and cast him after the damage I've pushed out, but I think it's worth running a few ways to protect him.

Butcher's Glee can work as a lifelink enabler when I need it and as a way to regenerate Tivash if I need to save his demonic bacon. Magebane Armor will protect Tivash from noncombat damage and will also give him flying. Darksteel Plate is an old standby and should work well for Tivash. Being indestructible will protect him from any Crypt Rats shenanigans I might get up to.

This build is positioned like many of my decks, edging towards high powered but definitely not too close to cEDH. I'm running Bolas's Citadel as it pairs really nicely with Aetherflux Reservoir, but if you wanted a lower-powered deck you might drop it out and run more lifelink dudes. Child of Night might not scale up well in Commander, but if you added in a Strata Scythe, Blackblade Reforged, and enough little lifelink dudes, they might be able to keep up with the bigger bodies on the field.

I think this list is positioned to be able to play at mid-powered tables and have a decent shot. Most of my decks center around the commander, and while this is no exception, I think it's one that should be able to do okay with or without Tivash on the field. If you're not making Demon creature tokens, you should be pushing your life total up and that's usually not a bad thing in Commander. You might find that you're playing archenemy if you get too far ahead, but once you get knocked back down to where everyone else is, it should be apparent that you're probably not the scariest deck at the table.

Making your Demon creature tokens on the end step will set you up with blockers, but doesn't let you turn them into an instant threat. That's obviously not as powerful as someone like Najeela, the Blade-Blossom, who creates her Warrior tokens tapped and attacking, but it also might let us fly under the radar just a little. My only real concern is that I'll make some monstrous 24/24 Demon token and a tablemate will steal it and use it to kill me. An Oloro player mind-controlling Tivash would be really, really bad as well. I can't imagine that ending well for anyone but the Oloro player. Creature theft happens, and if you're in a meta with lots of threaten/sacrifice or mind control spells flying around you'll want to run Swiftfoot Boots and Lightning Greaves to protect your big boys.

That's how I'd tackle Tivash. I think it would be a fun mono-Black deck for casual mid-powered Commander. I'm not sure how much you could push the power level up, but I bet it would be fun to pilot. I may well get a chance to play this list online in Tabletop Simulator. I'm eager to take my Laelia, The Blade Reforged list out for a spin too, so hopefully I'll get the chance to play both lists this week.

With Modern Horizons 2 nearly upon us, the writers here at CoolStuffInc.com will soon be pivoting to writing about that set. I've had a very busy 2021 so far, writing twice a week for a few months now. This pace is clearly sustainable, but I'm going to move back to writing once a week in June. I hope you've enjoyed the extra installments of Commanderruminations, and I also hope that moving back to once a week will result in a little more time put into each installment. I like to play the decks I write about and writing twice a week had made that a real challenge.

If you've built Tivash, Gloom Summoner, I'd love to hear how my list measures up. I love the Thrashing Wumpus / Loxodon Warhammer strategy to make a huge Demon. I also love that you can equip your lifelink enabler to your shiny new demon and swing with it on your next turn. At the right tables this list should be a lot of fun and could pack quite a whallop.

That's all I've got for today. Thanks for reading and I'll see you back here in a few days for my last Thursday column.