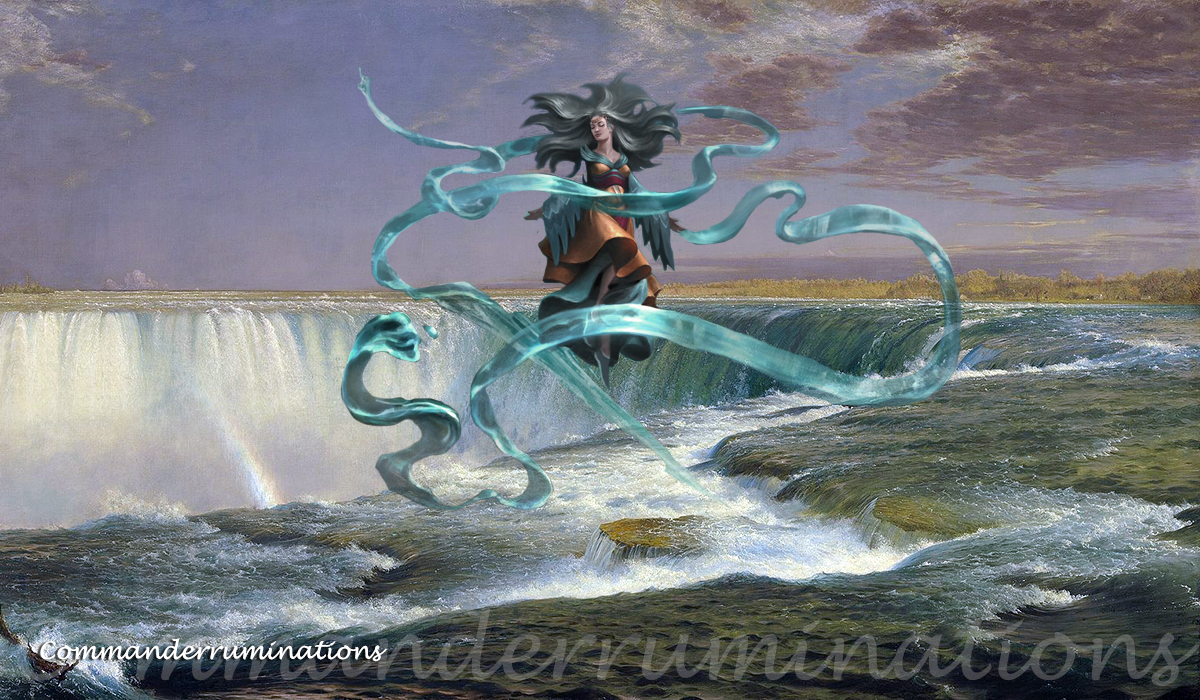 Flood of Tears by Adam Paquette.

As a writer, and a writer who writes about Commander, I get the chance to explore lots of really interesting commanders. Sometimes I end up with builds that aren't that far off the beaten path. Sometimes I genuinely feel like I'm taking a card or cards in new and interesting directions. Today I've got one of those weird columns where I'm going to tackle two legendary creatures that I probably would never have thought to put together. They happen to be two of the last legendary creatures from Commander Legends and Strixhaven that our intrepid team of writers here at CoolStuffInc haven't yet covered.

Those lucky creatures happen to be Esior, Wardwing Familiar and Ghost of Ramirez DePietro.

Esior is a flyer that will tax my opponents three mana for any spell they cast that targets one of my commanders. That means I'd probably do well to build this deck's strategy around attacking with them.

Ghost of Ramirez DePietro is a Spirit Pirate who can't be blocked by creatures with a toughness of 3 or greater. That evasion could make Ghost a good attacker to push out commander damage. When he deals combat damage to a player, I can choose up to one target card in a graveyard that was discarded or milled this turn and put it into its owner's hand.

That's a mouthful, but the bottom line is that I want to self-mill in my first main phase of my turn, use Ghost to get a card back with his combat damage trigger. His recursion is a combat damage trigger so I'll want to run as much double-strike as possible. Getting back two cards will be pretty sweet, but there are only two ways to give double strike that can be run in a Mono-Blue deck so I'll just have to enjoy those moments because they won't come often.

There are two basic elements to this deck - self-mill and voltron equipment. I want to attack with Ghost of Ramirez to bring back a card from my graveyard, so I really want ways to put cards into my graveyard. I could bring back a card I discarded, which makes cycling a possible option, but I'd rather build around mill. When you set yourself up to be able to mill target player, you get to mess with top-of-deck tutors and if you get enough of the right cards onto the field you can pivot from milling yourself to milling one of your opponents. Just don't pick the graveyard deck or you'll rue the day you loaded up their "second hand".

Thought Scour and Mental Note both mill two cards and draw me a card for my trouble. I've got a decent number of instants and sorceries that can mill a player, but I generally prefer to lean on permanents that can be used every turn. Ambassador Laquatus, Drowner Initiate, Hedron Crab, Merfolk Mesmerist, Sage's Row Denizen, and Vedalken Entrancer are all bodies with mill abilities tacked onto them. If this deck were aiming for a higher power level I'd throw in some infinite mana combos so I could mill out my opponents with the good Ambassador, but this version isn't looking to combo.

Not all of my mill effects target players. Dreamborn Muse will see each player mill equal to the number of cards in their hand. It's in here in part because I just love that creepy artwork, but putting a clock on a table of Commander players can backfire, so be aware that this gal could be a removal magnet. If Bruvac, the Grandiloquent is also on the field, your opponents will be milling twice as many cards as you are milling. Court of Cunning will let you mill any number of target players two cards, but if you're the monarch that becomes ten cards. You'll have to keep from taking combat damage, but this deck runs Propaganda and a handful of bounce spells to help keep attackers at bay, so it could happen for you. Milling each of your opponents for 20 cards will really put pressure on your tablemates, so be ready to play archenemy if that happens.

Well, I should say that commander damage CAN win, but I'm not sure it's the best strategy ever. I'm also not sure that mill is the best strategy ever, but we're not building a high-powered deck today - we're finding a way to make the commanders that fell into my lap work in an interesting, playable way that might actually be able to push for a win.

To try to kill an opponent with Ghost of Ramirez DePietro, or even with Esior, Wardwing Familiar, if I've got an opponent who can't deal with flyers, I'll need to pump them up a bit.

In this deck, Strata Scythe will see me exile an Island from my graveyard and the equipped creature will get +1/+1 for each Island on the battlefield. I might not ramp a heck of a lot, but it doesn't take that many players in Blue for that piece of equipment to turn one of my commanders into a two-turn threat. Blackblade Reforged is also in the list and will give a creature +1/+1 for each land on my battlefield.

While they don't do as much to increase my damage output, Scytheclaw and Quietus Spike both will have an opponent lose half of their life total if the equipped creature is able to do combat damage to them. That will help me deal with opponents with high (but not infinite) life totals. I'm mostly leaning on equipment but the aura Corrupted Conscience will give the enchanted creature Infect, making a 10 damage kill another way to kick a tablemate to the curb.

Getting through blockers is a concern for this deck. Ghost of Ramirez can't be blocked by creatures with power three or greater, but how often will we have an opponent with no little guys on the field? I don't have that answer for you, but with Amphin Pathmage, I can just make him unblockable. Rogue's Passage and Access Tunnel are also in the list for that purpose, and I could see running Suspicious Bookcase because that card is just amazing.

Protection from a color or two can often help a creature get through blockers, so I'm running a handful of Swords. Sword of Light and Shadow, Sword of Body and Mind, Sword of Feast and Famine and Sword of Fire and Ice are all in the list, and I could see adding Sword of Hearth and Home when it becomes available later this year.

Umezawa's Jitte requires some explanation. This odd little blade will get charge counters and I can remove them to do a number of things. If I've got an opponent with a little guy or two standing in my path, using Jitte to give them -1/-1 enough times to kill them might clear the way to let Ghost swing through unblocked.

Tangled Up In Blue

Is this the 3,541st Mono-Blue Commander deck some old fart decided to name Tangled Up In Blue? Probably, but it was Bob Dylan's 80th birthday last week so I'm going with it anyways. This list has a relatively low creature count, but that isn't out of line for a deck that is looking to win with a pumped up commander. I could see adjusting that creature count up and dropping some of the non-creature mill cards if it turns out that I'm running a few too many self-mill options. That part of the plan is important, but I really only need to self mill a card or two before I attack if I'm only getting back a single card with Ghost's combat damage trigger.

I've played lots of voltron decks over the years, but I'm not sure I've ever played a Mono-Blue one. These commanders don't scream voltron the way someone like Zurgo Helmsmasher does, but I think this could end up being a fun casual deck that could annoy tablemate that can't stand to be milled and occasionally surprise your friends when everything comes together just right. I love the idea of constantly getting cards back from Ghost of Ramirez DePietro's combat damage trigger, but I do wonder if I'm overestimating how effective this approach would really be.

I thought a lot about taking a very different path for this deck. I took a long look at Persistent Petitioners, which is the kind of card you don't really run one of in a Commander deck.

Persistent Petitioners can help a deck like this engage in incremental self-mill, and if I mill another one of these Human Advisors I can use Ghost of Ramirez DiPietro's combat damage trigger to put it back into my hand and then cast it in my second main phase. With enough Petitioners on the field, the prospect of milling an opponent gets very real.

Digging into a mill strategy would lead me to run guys like Mirror-Mad Phantasm. I could self-mill toward a Thassa's Oracle or Laboratory Maniac win, or I could turn the tables with a card like Psychic Spiral and hit an opponent with enough mill to leave them with no library to draw from.

My problem with this approach was simple. Esior and Ghost don't actually play into a mill strategy in any way. That doesn't mean it couldn't be a unique and entertaining deck, but a voltron commander damage strategy made more sense to me, at least for this first draft.

Have you ever had a card or cards dropped into your lap for you to build a Commander deck around? I ended up enjoying this little project and I would play this deck at the right table. I wouldn't be expecting to win, but to be honest - you should probably never expect to win when you're playing Commander. There are too many variables, too many weird things that can come up over the course of a game, and it's too hard to win if everyone else ends up ganging up on you. With this list, it's somewhat unlikely that everyone will gang up on you.

With Modern Horizons 2 on the horizon, I've been thinking that I may well do another "deck in a box" challenge. That means that I'll open an MH2 box and see if I can build an entire Commander deck using just cards from the booster packs in the box. It never really leaves me with a particularly high-powered deck, but I've still enjoyed it as an experiment and fodder for one of my columns.