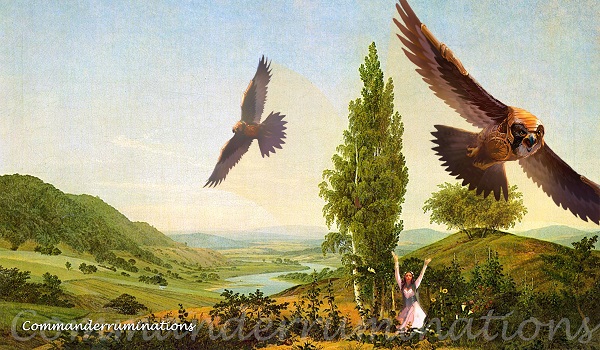 I recently predicted that we would soon all be up to our eyeballs in egg tokens. There are a number of powerful new commanders in the 2019 precon decks, but for some reason I had a feeling that Atla Palani would wind up being one of the most popular. I know how much fun cheating creatures into play can be from playing Mayael the Anima and for some reason I was expecting to see some really broken Atla Palani decks. I haven't yet seen a truly obnoxious Atla build in person yet, so for this week's column I've decided to give her a look.

Atla Palani is a legendary Human Shaman who costs

and has 2 power and 3 toughness. She isn't going to be leading any voltron decks anytime soon, but her party trick is where things get interesting. For two mana she can tap and make a 0/1 green Egg creature token with defender. If that doesn't sound spicy enough, it gets better. Whenever an Egg we control dies, we reveal cards from the top of our library until we reveal a creature card and we put that card onto the battlefield. The rest go on the bottom of our library in a random order.

That's what we've got to work with. You've probably seen some Atla Palani deck techs already, so I expect there are Atla auto-includes that you're already familiar with.

She can make eggs, but she doesn't care if her eggs are ones that she... laid? She's happy to go get you a creature if a Dragon Egg, Roc Egg, or Rukh Egg hatches on her watch. She's an equal opportunity nest tender and the "Primal Genesis" precon deck even comes with the card Roc Egg.

The problem with running these Eggs is that you've already got a commander who can create Egg tokens, and you're using up valuable slots in your deck that might be better used for cards that will protect her or stop your opponents from winning the game first. I'd rather leave out Dragon Egg, Roc Egg and Rukh Egg and run cards like Swiftfoot Boots, Krosan Grip, and Thousand-Year Elixir instead. You've already got a way to make eggs, so unless you're going for a really casual build, you might be better off without the non-token Egg creatures.

It's worth noting that there are lots of artifact egg cards that can be sacrificed. While a Skycloud Egg might go to the graveyard, it won't actually be dying. It's not a creature and Atla won't be able to go get you a creature when you sacrifice it. Even if you animated it, that wouldn't give it the Egg creature type. Artifact eggs are great for theme, but are a dead end if you're trying to build synergy into the deck.

This tribal artifact is a piece of Shaman Equipment that has a ton of synergy with Atla. It will automatically attach to her when she enters the battlefield. When a creature is put into a graveyard from play, we get to untap the equipped creature. The staff also gives the ability to pay two mana and tap to do 1 damage to target creature or player. Those eggs are 0/1 creatures, so you can use this staff to keep cracking eggs and cheating creatures into play until you run out of mana or run out of eggs.

I often write about building casual decks in this column. I occasionally dip my toes into more competitive strategies and every once in a while I am able to cobble together a pretty competitive list. Today I'm going to touch a third rail and look at a strategy that's perfectly legal in our format but is generally frowned upon - mass land destruction.

I'm not suggesting we get "down with MLD (yeah, you know me)" unless we can set up what will probably be a game-winning turn. I don't think blowing up our opponents' lands and making them wait for 45 minutes to eventually die is a great way to win a game of Commander, but if that land destruction can both lock them out of the game AND practically guarantees us a win, it becomes an effective and unexpected strategy that's fine to add to your game. Folks might not like it, but it's really no meaner than lots of other wincons.

This deck is going to have a pretty simple goal which might not be quick or easy to pull off. We'll need a decent amount of mana and some very specific cards. We don't have access to Blue or Black so our ability to tutor is somewhat limited. We'll have a general goal of making lots of eggs, wiping the board and eventually winning by combat damage, but our "Magical Christmasland" scenario plays out something like this.

Step 1: Lock out our opponents

We want to be absolutely sure that our plan doesn't get disrupted so we'll try to lock our opponents out of casting spells on our turn. Fortunately there are a few ways to do that in Naya colors. This step is optional if you don't mind having your winning turn get interrupted, or if your opponents are all tapped out or have empty hands or are just so woefully inept that you're sure you're safe to proceed.

The gold standard for locking down a win is Grand Abolisher, but if you can get Conqueror's Flail equipped or get Dragonlord Dromoka on the field you should also be fairly comfortable. You simply want to make sure key spells don't get countered or key creatures don't get removed on the turn you're going off.

We want to turn not just our own lands but ALL lands into creatures. Hopefully you will have 6-8 lands or more on the battlefield at this point in time.

Step 3: Make your creatures into eggs

Here's where I have to be honest with myself and admit that this might wind up being another of those goofy wincons that I'll never pull off in a game. We're low on tutors in Naya colors so we'll have to draw into our key cards. Part of the fun of Commander for me is dreaming up wacky scenarios and trying to make them happen. This step definitely isn't optional.

Mirror Entity will be familiar to anyone who has been researching Atla. Both of these cards can turn all of your creatures into Eggs. If you were able to turn your lands into creatures, that means they are now Eggs. They also happen to be Manticores, Goblins, Narwhals and Myr because they have gained all creature types, but the creature type that matters is Egg.

If you didn't see this coming, I'm not sure what to tell you. This is where we wipe the board.

It's important to note that we're destroying creatures, not "nonland creatures". We should be wiping out most if not all of the creatures on board along with everyone's lands. We'll be running Bonds of Mortality to keep our opponents from having any indestructible creatures.

If all of our lands are creatures and all of our creatures are Eggs that should give us a decent number of creatures that we'll be pulling in from our library. We won't have any lands left over afterwards, but that's OK because we'll have a pretty good chance to close out the game.

The more lands and creatures we have available when we wipe the board, the more likely we'll be able to close out the game. We'll be looking for at least 14-16 Egg deaths and with any luck half of those will be from land creatures.

We'll want to swing on the turn we go off, so Ogre Battledriver is an auto-include. He'll give our creatures haste and will pump each of them +2/+0. If we hit Purphoros and enough token generators our job should already be partly done. Even Eldrazi Scion and Eldrazi Spawn will be able to jump into action to do a little damage when you're trying to close the game out.

If you can't kill all of your opponents in one turn, they'll hopefully be so crippled that they won't be able to recover in time. Everyone including yourself will be starting from scratch with their mana base, but you should have an army and they should have next to nothing on the field.

Even if we don't get to "Magical Christmasland", this deck should be able to churn out eggs and use board wipes to control the board pretty well until we're able to win the game. In actual games, plans don't always play out the way you envision them but running a lot of boardwipes usually gives you a chance to last long enough to get to the cards you really want to play.

The "top end" of this deck isn't that high, as our focus is on getting ETB damage from our token generators. We're not trying to crack eggs to hit an Eldrazi Titan or a Blightsteel Colossus, we're hoping to hit a critical mass of Eggs, creatures and lands and blow away the table in one horrible, glorious, land-destroying turn.

I am torn about not including any Populate cards in this list, but my columns reflect my actual deck-building pretty closely. I'm expecting to build a Ghired, Conclave Exile deck so all of my Populate cards are already being earmarked for that list. I don't know that we really need Populate for this deck. We have a few ways to untap Atla and make more than just one egg for each turn around the table. If we can create a few eggs and wipe the board we'll be buying time for what we hope to be the eventual game-winning turn.

I expect that Mirror Entity will quickly become a kill-on-sight target, which means that recursion and protection will become a priority if we want to keep the deck in working order. We could also pivot to a strategy where we use Mob Rule / Insurrection, Mirror Entity and Ashnod's Altar to steal and then flush our opponents' armies (after turning them into Eggs) to cheat creatures into play. I definitely like the way we are touching the "third rail" of mass land destruction in this deck. It feels different and vaguely clever to me and I like building decks in ways that I don't think anyone else is building.

I'm comfortable with the list above as a starting point, and look forward to blowing up a battlefield full of creature-lands sometime soon. Even if it only happens once in a blue moon, it'll still be worth it.

I've ignored combo strategies with this list and tried to do something a little different. What do you think? Would you play mass land destruction if it were in the form of trying to nail a game-winning turn? Would rather just torture your friends with a game that never ends? Is this clever idea something folks have already been writing about and playing? Let me know in the comments.