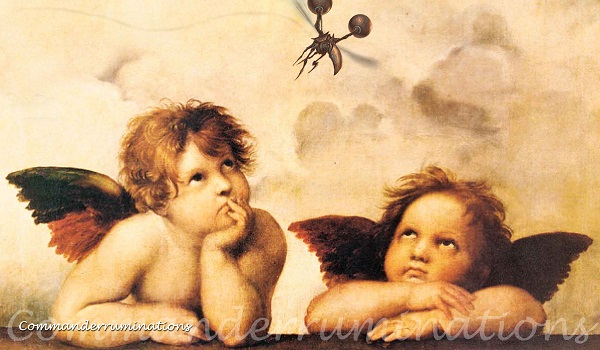 Cherubs from the Sistine Madonna by Raphael Sanzio (1512).

I've grown to have great respect for Commander decks designed to just flood the skies with flyers. I've been trounced out of the Blue by Sphinx tribal lists. I've broken out of losing streaks with my Mono-Red Lathliss, Dragon Queen deck. I've watched purportedly even matchups between precons turn into archenemy because The Ur-Dragon, when unchecked, can mount an amazing army of scaly, winged threats.

Flyers in sufficient quantities can be very hard to deal with.

Today's column is about a commander who is both well-positioned to give us a reason to load up on flyers and just happens to be in the most powerful color: Blue. May I present to you Donal, Herald of Wings.

Don is a 3/3 Human Wizard without flying who loves flyers so much, he'll give us a 1/1 Spirit creature token that is a copy of one nonlegendary creature with flying that we cast each turn. Those spirits will retain their other types, and this copy trigger can only happen once per turn so we'll want to choose carefully which creature we want to copy.

While I've been on a pretty big Dragon kick lately, my gut tells me that we're going to get the most bang for our buck out of casting Sphinxes. That doesn't mean there aren't loads of other great winged wonders lower on the mana curve than your average Sphinx, but they will be particularly good in this deck.

This wizard would play well in the 99 of any Blue flyers deck and would be amazing in a Volo, Guide to Monsters deck focused on flyers. We can load up on value from enter the battlefield triggers, get value from static effects, double up our combat triggers, and get twice as much out of any other flyer we want to run.

It should go without saying that there are a bunch of flyers we can run in this deck that are going to be amazing. Mulldrifter, even when cast for its evoke cost, will draw me two cards twice. Pilgrim's Eye will put two basic lands into my hand. Flyers like Cloud of Faeries, Peregrine Drake and Palinchron will give us two untap triggers. None of these are really that basic, but they are so common in Elder Dragon Highlander that it feels silly to shine a spotlight on them.

We'll get a ton of value from staples, but we'll also be getting value out of less impactful cards.

These low CMC flyers bring a lot to this deck. They let me scry. They draw me cards. They can even tap down my opponents' creatures. These may not seem like a big deal, but they'll help work to keep this deck running smooth. That means hitting land drops, drawing into interaction and always having something to do.

If our basic flyers are good, our fancy flyers are great. I'm running Consecrated Sphinx so every time my opponents draw cards, my extra copy will have me drawing two cards twice. Steel Hellkite will let me swing a big metal dragon at one opponent and a tiny metal dragon at another or even at the same opponent so I can activate them and destroy two-mana values worth of permanents. Glen Elendra Archmage and a 1/1 copy will give me counters for days, but I'd like to spotlight a few other all-stars in today's list.

Sure, Consecrated Sphinx is amazing, but for a paltry three mana, Loyal Drake and a 1/1 copy of Loyal Drake mean I'll be drawing an extra two cards when I go to combat if Don has managed to stick around. I don't even have to attack!

Diluvian Primordial will let me cast an instant or sorcery from each opponent's graveyard and its 1/1 copy will let me do it again. Chances are very good I'll hit ramp spells if there's a Green player at the table, and I may well hit removal, card draw, a tutor and who knows what else.

Dazzling Sphinx will give me a free instant or sorcery from the top of an opponent's deck if it manages to deal combat damage to them. That can be powerful when it happens once, but two of those triggers could be backbreaking if I hit the right spells. Sphinx Ambassador will let me dig through an opponent's library for a creature and if I'm lucky I'll end up getting it on my battlefield. Sphinx of Enlightenment is just good, old-fashioned card draw with the small drawback that an opponent gets to draw a card too. With an extra copy, it's six cards for 6 mana and you also get a 5/5, a 1/1 and two happy, but possibly a bit nervous, opponents.

My first draft of this list didn't include any cards that would let me win the game for drawing from an empty library. After I remembered what Mirror-Mad Phantasm brings to the party, I realized I had to run this wincon.

Those first two cards should be familiar. I'm running Deadeye Navigator with Peregrine Drake and Palinchron and can make infinite mana and then use Spectral Sailor's activated ability, or just flicker a card draw flyer to draw my deck. That's effective and can win the game, but my goal is going to be to win with Mirror-Mad Phantasm.

Mirror-Mad Phantasm is a 5/1 flying Spirit. His activated ability lets us pay to shuffle him into my library and then reveal cards until I get to him. All revealed cards go into the graveyard and Mirror-Mad Phantasm goes back onto the battlefield. This is a cute trick for a deck that wants to fill up its graveyard, but if you have a 1/1 token copy of Mirror-Mad Phantasm things get a little more interesting.

You would activate the token copy's ability and you would attempt to shuffle him into your deck. When he left the battlefield, your token copy would go *poof* and you would resolve the rest of the ability. That means you would shuffle your deck, reveal cards until you revealed Mirror-Mad Phantasm. Since your token went *poof* and didn't actually get shuffled in, you'd end up putting your entire deck into the graveyard. This is a weird variation on the old Hermit Druid / no basic lands trick and your opponents probably won't see it coming.

Remember that this only works with the token copy of Mirror-Mad Phantasm, though I could see a deck built around this wincon with clone effects that would also work to give you a Mirror-Mad activation that would mill your entire deck into the graveyard.

You'll still need to line up that card draw if you're not responding to a Thassa's Oracle cast trigger, but in this deck that shouldn't be too hard. There's a decent amount of draw in this list. If you don't want to win games that way, I understand. I personally love trying new things and this interaction might be goofy enough to get me to build this deck in paper. I'd love to pull off this little gem. I might tire of it after a few wins, but then again, I might not.

If we never hit this wincon, this deck has enough removal and can push enough damage through the air that we should have a chance at squeaking out an honest win on the battlefield. This isn't going to overwhelm over many opponents with its combat potential, but it has a fighting chance in a casual game of Commander.

This is probably the kind of deck that will perform well in casual games and maybe even at high powered tables. I don't think it can compete at the highest end of our spectrum. Blue is strong, but you're only in one color and having to focus on flyers to squeeze value out of your commander is a definite drawback.

I definitely think this list has room to grow. You might decide there are enough enter-the-battlefield effects to warrant including Panharmonicon. You might be in a meta where you need more stack interaction, but you're in Blue so you should be able to figure that out. I think this is a pretty solid starting point, and I just love the way Mirror-Mad Phantasm ends up working with Donal.

This isn't the first time I've worked through a list as I was writing and made a last-minute decision to run a set of cards that weren't in the original plan. This time it was the Lab Man wincon, but sometimes it's something as simple as running more counter magic or including staples that are so good they've become commonplace and a bit boring.

Running staples isn't a problem for me, but I'm acutely aware of the tension between my inner desire to be a hipster and my constant urge to be sharing playable, semi-competitive or even competitive decks. I think that's why I'm drawn to weird cards and love to try to find ways to break them wide open. I don't always succeed, but my favorite decks are ones that dig into jank but are also capable of game-winning plays or strategies.

That's all I've got for you today. If you celebrated it, I hope you had a great Thanksgiving. Thank you for reading and I'll see you next week!