There seems to be this prevalent idea within the Magic community that you should never run 41 or 61 cards. The general claim is that running the extra card reduces your chances of drawing specific, important cards in your deck, and therefore is bad for your overall results. I intend to show that this claim, while it has some merit, is misleading. The fact of the matter is that there is a very good reason to run 61 cards in a deck that might otherwise want 60âmana ratio. The extra card provides a good way to control the number of lands you draw without giving up much in return. You can either run an extra land or an extra spell, and either raise or lower your mana ratio slightly.

Let's examine the data. The first order of business is to actually look at the effect an extra card has on your ability to draw any individual card. Here is the raw data:

Number of Copies in the Deck

Number of Copies in the Deck

For the numerically challenged, here is a pretty picture: 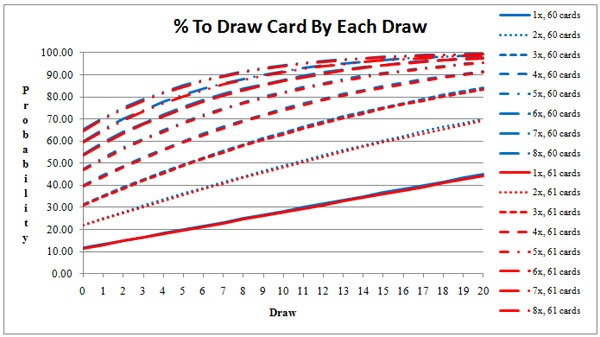 Here is its effect on your mana ratio:

% Chance of Hitting Land Drops by Number of Lands

And some pretty pictures again: 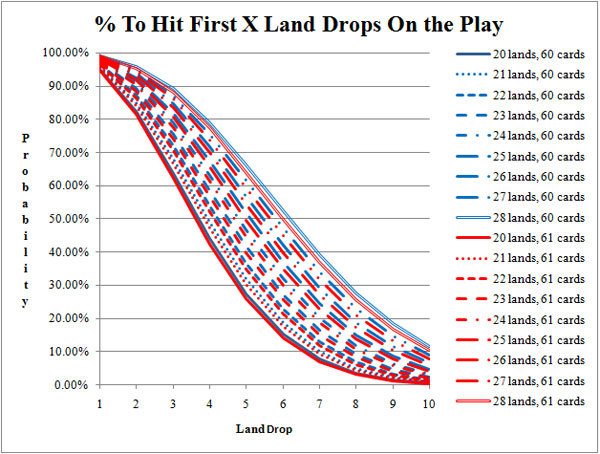 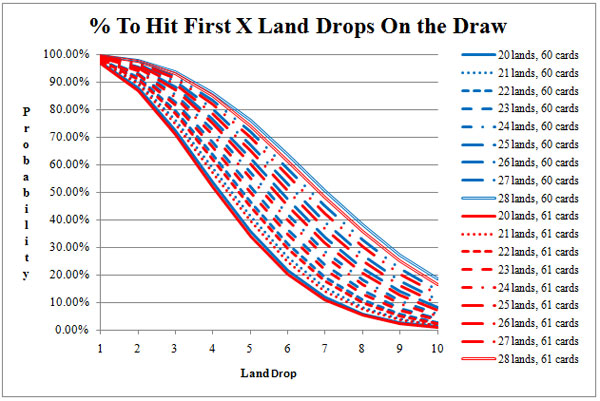 To show some graphs that have less action, I have selected two common land counts, 24 and 27, and graphed the 60 vs. 61 card curves for those land counts: 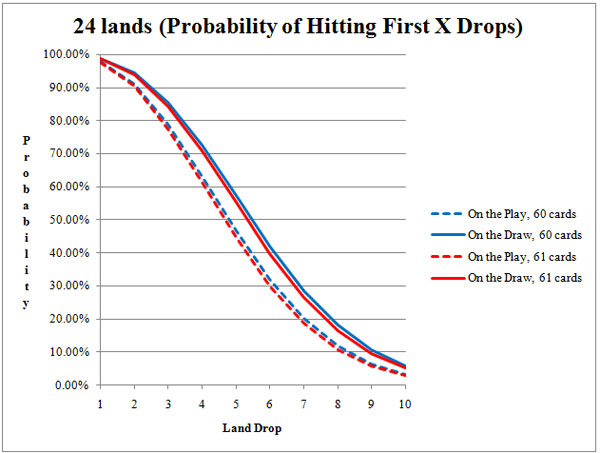 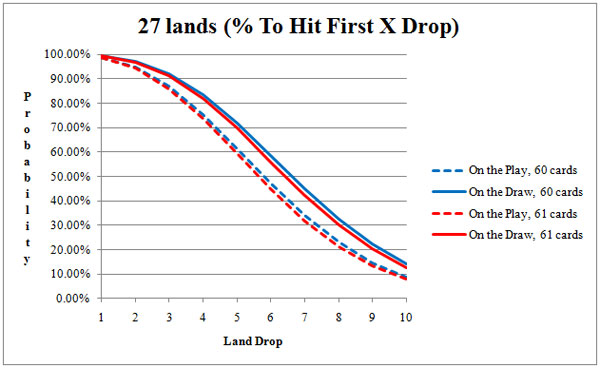 I will now present the data for 40 and 41 cards, in the same format. First, the draw probabilities:

And, here we have a pretty picture again: 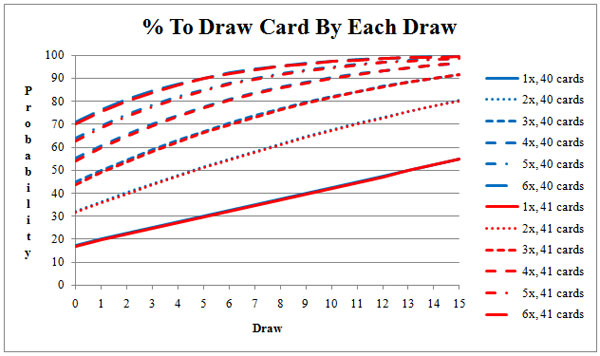 And, once again, here is the data for your land-drop probabilities:

And here are some more graphs: 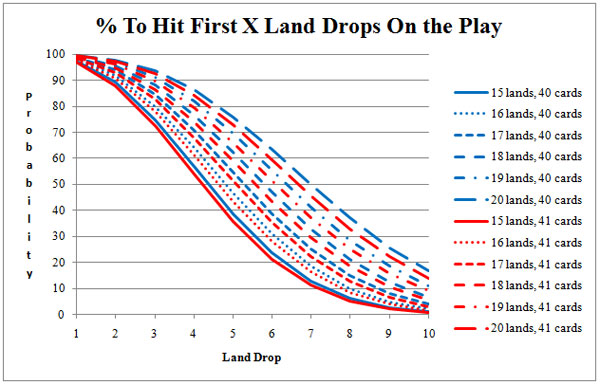 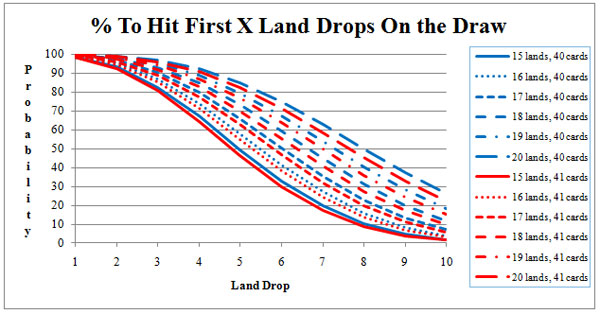 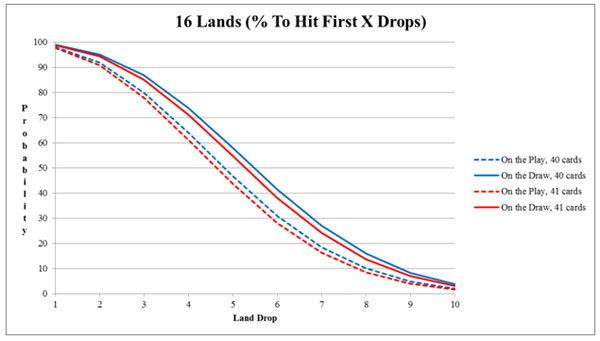 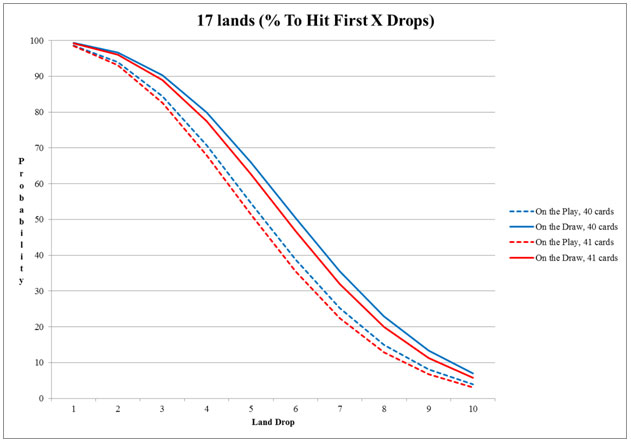 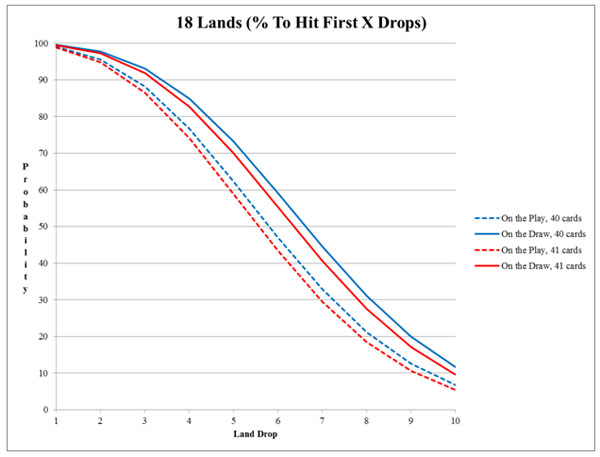 The key here is to look at the spacing between the red and blue curves. It is evident that the extra card has a minimal effect on draw probabilities, especially past the first three or four draws. In fact, its effect is nearly always less than 1%. However, it is clear that by using the extra card, a player can gain extra resolution in their land-drop frequencies, allowing more fine-tuning for mana ratios. The effect of the extra card is in the 2% to 3% range for 60 cards, and the 3% to 5% range for 40 cards. If you don't use the potential of the extra card, you are left fine-tuning your mana ratios in larger increments. In fact, your ability to fine-tune is about half as good.

Now, let me ask youâdo you lose more games to not drawing a specific card, or to drawing lands at the wrong time?