Innistrad to Be Ages 18+ 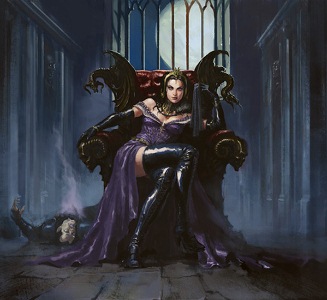 Renton, Wa. â Wizards of the Coast announced today that the Innistrad block will be restricted for sale to those eighteen years and older due to the dominatrix themes throughout. âThe game is growing,â says a WotC representative. âMany of our players are older, and can handle more mature themes. But we want to be responsible, so weâre taking this step to ensure that we do not distribute inappropriate material to minors.â Local player Chris Ashworth, 16, expresses his infuriation at the announcement: âI was really looking forward to Innistrad,â he says. âI mean, I like the new mechanics and the double-faced cards and all that, but what I was really looking forward to was all the fantasy art of vampire demons in stripper boots.â

Renton, Wa. â A confidential source within Wizards of the Coast has revealed that WotC actually has no plans to release a third set in Innistrad. Working closely with experts on the Mayan calendar and Doomsday predictions, the development team for the block has taken the almost certain end of life on this planet into consideration when planning the release schedule of the latest sets, and has no plans to release any product in 2012. âWeâre not sure what Doomsday will bring,â says our source, âbut weâre pretty sure the lack of a third set in Innistrad is going to be the last thing on peopleâs minds when the meteor hits, or the solar flare happens, or the Earth suffers a geomagnetic reversal.â

We tracked down several members of the Future Future League, whom we foundâinexplicably, given that weâre in the middle of peak development time for the rest of the Innistrad blockâin Cancun sipping margaritas. They declined to comment on the allegations, saying only that development was of course âon trackâ for the estimated release dates, and that a pressing commitment at a Hawaiian Tropic model search to be held later that evening prevented them from discussing the matter further.

Gizmodo Scandal Revealed to Be Plot Engineered by Jon Finkel

The apparent âdissingâ of Magic legend Jon Finkel on the Gizmodo website has been revealed to be an ingenious and successful plot engineered by none other than Finkel himself to gain the attention and sympathy of thousands of women around the world. The scandal erupted when Alyssa Bereznak of Gizmodo posted a contempt-laden story about two dates she allegedly went on with the Magic pro. In them, she essentially criticized Finkel for being really, really good at playing Magicâso good that heâs been immortalized on a cardâas well as being a successful, good-looking professional. While to many nonplayers that might indeed be an insult, the result of the story wasâexactly as Finkel predictedâthat hordes of self-identified âgeekâ and ânerdâ women offered themselves up to Finkel on metaphorical silver platters in a frenzy of outrage and sympathy. Offers to date and even to sleep with âarguably the best Magic player everâ poured in from around the globe.

While at first it appeared that Finkel was a victim of a shallow woman out to rope in readers for her article, further investigation revealed that he colluded with Bereznak to fabricate the story in an attempt to create exactly the sort of situation that ensued. However, oddly enough, this doesnât seem to have hurt his chances with many of his newly enthusiastic female fans. âI donât care if he really went out with this Alyssa chick or not, or whether the whole thing was made up,â says Tiffani Swanson, 22, a casual MTG player from Longview, California. âIâd totally still go out with him. Heâs Jon Motherfuckinâ Finkel!â