I hope you are having a great day today! Are you ready for another dunk for apples in the Magic tank? I hope so!

We have a new release to pore over, and they look scrumptious to me. I can't choose the best! I'm like an ant that just broke into a candy factory. So what cards really ping by Abe-Dar? Let's take a look at the best cards for casual Magic, including multiplayer, 60 card fun brews, and Commander. 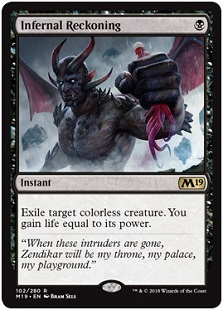 This is an amazing tool for your toolbox. You aren't going to go out and pick these up for every Commander deck you have, but they are good at doing two things. They will exile and take out almost every playable Eldrazi ever printed, as well as being a threat to end artifact-dorks. Artifact decks with tons of colorless options as well as Eldrazi decks are going to be put on notice, so long as you remember this card. It's a Swords to Plowshares that both exiles the threat and gains you the life from its demise, all for a comfortable one mana.

Now what I wish it said was "Exile a colorless creature. You can life equal to its power." Then you could handle something like Emrakul, the Aeons Torn. But it's a strong start! 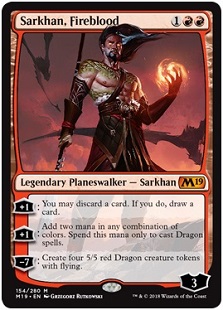 There are a few good things that any 3-drop planeswalker wants to bring to the table. As we know from playing with planeswalkers by now, the cheaper a 'walker can be, the more quickly it can come out, often earlier than someone can answer it. This is a great 3-drop that can begin looting as soon as it hits the table while having 4 loyalty for people to answer. If you failed to answer, then you now have two more mana the next turn. The looting alone is worth it, but in Commander Sarkhan will shine. There are a huge number of Commanders that are Dragons. Cast Sarkhan on turn three. Now on turn four, you can speed up your Dragon Commander by a full two turns. And if Sarkhan was also sped up with something like Sol Ring or a Birds of Paradise, then you can really push the speed of that Dragon-y Commander! 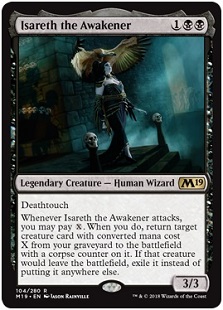 If you enjoy card advantage then Isareth is going to be your Awakener of choice. For three mana, you easily get a 3/3 body. She is on-curve. Now swing with Isareth. Spend some mana and return your best creature from your graveyard to play. You get a second helping of smashing or enters-the-battlefield triggers from your dorks. Now sure, they'll exile later, but they'll stick around for free until someone takes them out (or bounces them). Don't sleep on her deathtouch either. If you swing, someone has to decide if they want to block and trade with her. If they do, then you traded Isareth for one of their dorks and brought back a cool creature. That's the worst-case scenario and you still wound up ahead in the card advantage game. What if they decide they don't want to trade? Or what if Isareth is strong enough and early enough to smash out any defense they muster? Deathtouch answers a lot of combat tricks as well, like variants on Giant Growth. She's good! 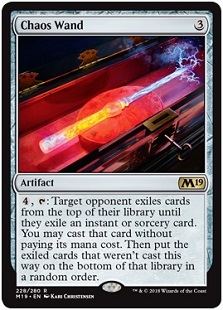 Chaos Time! I hope you are sitting back in your seats because it'sâ.â.â.â chaos time!

The good thing about Chaos Wand

Is that you'll net a free spell from your foe

What it will be, in the end

You and your friends, just don't know

But it will be something. That's good. A free Rampant Growth? Lightning Bolt? Ovinize? Disenchant? This is going to always lead to a fun moment of suspense.

I know I'm ready to get my Chaos Wand on! 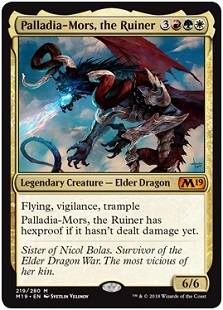 I am sorry, fans of Arcades Sabboth, Vaevictis Asmadi, and Chromium! She is clearly the next best after #1 below (and while that's technically a spoiler, come on, we all knew he'd be there). This version of Palladia-Mors is almost Akroma-Esque for just 6 mana. You get a 6/6 for 6 mana, with flying, vigilance, trample, and (often) hexproof. That's a lot of sauce from just a little mixing. Palladia-Mors brings a serious game-changing level of heat for very little. And oh, you could have a 4th turn Palladia-Mors with #10 above. 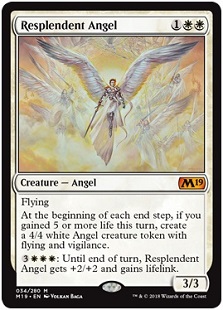 Don't sleep on this card for casual play. Casting cost matters. A 3/3 flyer in Mono-White for three mana is not something you'll normally have as an option. At least not with a disadvantage tethered to it. The only disadvantage with Resplendent Angel is that it's going to get targeted for removal. That's okay though, because the activation and potential for token-manufacturing is worth it. It has its own build in self-pump that can be useful later. Only one pump gets it to enough size to trigger its life gain token. That's pretty strong. 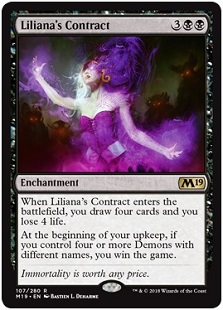 The good thing about the Contract is that you will automatically net four cards for four life on arrival. That's a lot of cards, especially in a format like Commander where you begin with 40 life and the four life-loss is paltry. Without doing anything else, her Contract is strong. This is one more mana, one more card, and one more life than commonly card draw effects like Ambition's Cost. You don't need synergy to make her work.

We have a lot of ideas for Liliana's Contract.

But, before we do, why isn't this legendary? With the theme of historic the very set before, isn't this the perfect example of legendary card?

Anyways, there are a few things you could do with it. First of all, since this card rocks a cool enters-the-battlefield ability, then you could play into that space. Flicker it to draw more cards with Flickerwisp. Or you could bounce it or recur it. Cards like Obzedat's Aid or Brago, King Eternal come to mind.

But then you can just to win!

There are a ton of great Demons out there. And as a bonus to mechanics over flavor, they don't have to be legendary.

You can use high quality Demons like Shadowborn Demon, which has a cool trigger, or other classics like Rune-Scarred Demon. You could also run cheap Demons like Rakshasa Deathdealer or Ammit Eternal.

So many great Demons!!!

Get your Demon win on. 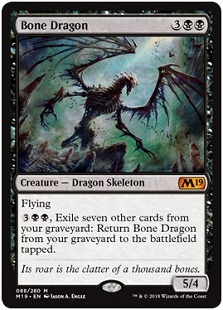 This Bone Dragon has it all. It's five mana to cast, and you get a 5/4 flying for your trouble, so that evasion and size for your investment. You can win the game with it just on its size and cost, without ever using the card for ill purposes.

But what if someone kills it? What if they countered it? That happens, right? And when it does, you don't have to get all bummed out. Simply exile a threshold amount of stuff from your graveyard, and then you can toss this back onto the battlefield under your control, tapped. It's not subject to (normal) countermagic. You can do it at the end of someone's turn. And you are exiling a bunch of stuff from your 'yard. Normally, Black wouldn't want to do it. You'd want to keep your graveyard as an option or recursion and such. But there is a card just printed that works very well with thisâ.â.â.â 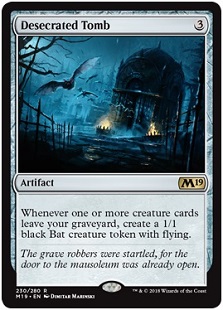 Yes, it's The Desecrated Tomb Delve Enabling Machine. It works well here as well. Exile some dorks, and make some Bats. You'll also churn out a Bat for the Bone Dragon itself, by the by. What's not to love here? 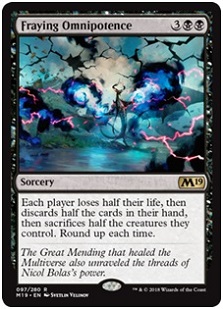 One of the great things about card evaluation from new sets is the ability to really compare new cards to the entire history of Magic cards. We know what appeals to casual mages. We know what they have been missing. We know what they want. Fraying Omnipotence brings a new tool to kitchen table gaming, and it feels like a powerful Pox effect. Each player loses life, dorks, and cards just like Pox. Pox hits lands too, but this goes for half of the cards. Different people will like this for that reason alone. Trust me. Folks are going to be building around Fraying Omnipotence long after Core Set 2019 rotates from Standard. We have taken notice of it! 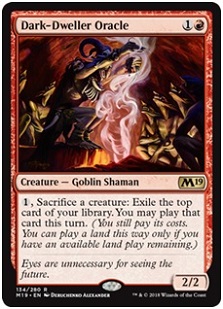 Take a look at Goblin Bombardment. This is a classic 2-drop that lets you sacrifice any creature you want, without any mana required, and then sent it out. Someone is taking damage to their face or their dorks or their 'walkers. It has fueled many a combo engine. Goblin Bombardment doesn't suck.

And now consider the Oracle. The Oracle is also a 2-drop. But it's on legs and can swing at people. It's also a 2/2 for two mana, so it has the right size for its cost. It plays nicely into what you are trying to do. But what makes it better are a few key additions to the Shaman:

It reminds me a lot of fellow Core Set 2-mana 2/2 Shaman called Fauna Shaman with a one-mana activation cost. It's that good.

Just because a card is the obvious #1 doesn't mean it's not #1. Nicol Bolas, the Ravager gives you a powerful, on-curve threat when it hits. Four mana? Sure thing; here's a 4/4 flyer. Oh, and have a Liliana's Specter ability too.

This lack of options and quality is why you would run stuff like Cackling Fiend or Scythe Scepter. You don't have to run them in dedicated discard decks, they have value on their own. Nicol Bolas, the Ravager is already class.

For example, if you cast Kytheon, Hero of Akros, you still need to wait a turn to attack. Even if you have enough bodies when you leave your turn, they might die to removal and such. You can't guarantee that Kytheon is flipping. Your opponent has agency to stop it from happening. The same is true of Chandra, Fire of Kaladesh. Chandra has to deal three damage. She needs help, or a number of Red spells, to help do that. You can't rely on her flipping without giving your foes the chance to stop her. Even the powerhouse of Jace, Vryn's Prodigy requires you to tap and use him and to have a stocked graveyard to transform him. None of these are going to happen immediately. From fighting graveyards to killing creatures to giving your opponent time to react, there are options out there to stop these flip-walkers.

But not Nicol Bolas! You just need the mana. Plus, his enters-the-battlefield ability can hurt your ability to stop him from flipping. You have the agency. Not unlike Liliana, Heretical Healer whom you can control if you build your deck right. All she needs to flip is something of yours to die (that's not a token). Normally that would require something to be killed by an opponent, but you could sacrifice something such as #2 above and transform her. Under the right circumstances, you can get her to flip without your opponent's having much agency to do anything about it. The same is true of our new Nicol Bolas overlord.

You are getting a strong 'walker too. Your first set of money got you a mass discard, and then you can flip it. You can get +2 draw cards for +2 loyalty. That's better pure card drawing than any other 'walker card. His 2nd ability basically reads, "Destroy target creature or planeswalker." Very little survives 10 damage. Reanimation is great. I doubt you ever get him to 12 loyalty to zark an entire library, but there's hoping. His other abilities are too good!

Are you ready for the next slate of Core Set goodness? What are you most looking forward to running from the set? Alons-y!