This week, CoolStuffInc released a series of Mono-colored Commander decks built for new players. They were released yesterday, and we looked at the first of these Mono-colored builds - Lena, Selfless Champion, who makes some dorks on arrival to the battlefield and then can sacrifice to save your team if they are small enough. We reviewed the decklist that comes with the series, and then I gave you some highlights from the deck, and concluded with some suggestions for ways to upgrade it.

The goal of this series is to give you a starting point for Commander if you are interested, as well as being a good way to learn the game in general. The decks feature a number of fun interactions and such, and give you chances to get a feel for Commander as a format. Then, if you like it, you can add more cards that will amp up the power level of your deck.

I was asked to help build the decks, so I wanted to pause and unpack each for you.

Today we are going to look at our Mono-Blue God.

Kefnet the Mindful will lead a fun Commander deck. Kefnet is very easy to drop on the third turn, and assuming you only played a land your first few turns, you should be able to swing on turn four after drawing and before dropping a land. That's a cool presence. You also have an interesting flying, indestructible, and card-drawing feel to Kefnet.

Where did I want to go with Kefnet? Card drawing? Control? Sure, those are here!

But what I really wanted to do was to dip into flying... 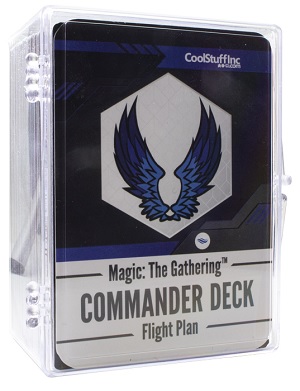 Let's take a look at the decklist...

This deck wants to use flyers and flying effects to help control the board.

Take a look at Windreader Sphinx. See how it's perfect with Kefnet? It's both card drawing and flying enabling at the same time! It also has a powerful presence on the board as you can draw cards when you drop it, even if you cannot swing with it that turn because it doesn't have haste.

I have also tried to dip into cards like these that add strong card drawing while remaining on theme. These are the sorts of cards that Kefnet's Flight Plan wants to dip into. Flyers with enters-the-battlefield triggers that are useful as well as stuff like Chillbringer that can tap down something for a bit on arrival.

We also have counters, and answers in various places. From megamorphing and countering something with a fun Stratus Dancer to flashing out a Capture Sphere to lock it down permanently, we have a lot of fun things happening!

You know you want to send all of your foe's stuff down to the ground permanently, with Archetype of Imagination, right? Right! And we have a small but present number of non-flyers that are here because of their value elsewhere, like Wild-Field Scarecrow getting two lands. And all of your flying stuff will get pumped by Windstorm Drake!

What changes would I suggest?

If you are looking to amp up the deck's core concept, then there are a lot of places I could suggest looking too.

I'd begin with Ms. Mu. Despite the fact that she's strong and recently printed, she's dropped in cost tremendously since Core Set 2020, despite her power. She's not been seen much in tournaments, and thus, isn't in demand. This is a perfect time to grab her. Her +2 to drop a flying and reduce its size, as well as making 4/4 flyers is very compelling. I love the idea of swinging over a flyer that was just dropped to the ground and now it cannot block. So sad!

Then these two next. You can't have this build without Mulldrifter, who both flies and draws a pair of cards on arrival. It's virtually ubiquitous in Commander, and stronger here! Meanwhile the anthem-like nature of Favorable Winds is useful at the kitchen table too. You'll get a cheap 2-drop that will pump virtually all of your team! What's not to love? Exactly!

How about some more flyer enablers? These are two more flying-matters effects that are useful additions to the build. By dropping the price on your flyers, Warden of Evos Isle is a fun Wind Drake that also serves as an early body to drop. As so many of the cards we are adding are flyers, it's a useful mana-drop. Sprite Noble begins by adding a little bump to your dork's toughness. But you can also tap it to give them a full +1/+1 instead to give the team some power. And again? Flying matters!

Who wants to tap all-non flyers? Is it you? I bet so!

This is tricky and awesome! Do you see it? Nope? Only flyers and islandwalkers can attack while this is on the battlefield. As your team is (mostly) all flying, you can swing with the entire group. Normally when you swing all out, you have to worry about people coming back and punching your face by attacking back. But not now! Only if they fly or have islandwalk can they attack anyone. And oh yeah, this can attack too! There's no reason not to run this out there often.

I want to add in flyers that can give you more options. While there's nothing wrong with Capture Sphere and similar effects and their ability to lock down a dork while you swing, you can get a similar effect with Dungeon Geists while also having something that flies and punches. Dungeon Geists is a great example of a way to amp up my theme while also keeping my control-ing effects going. Sower of Temptation is another card that plays into a similar space. It will give you answers in a flying form.

In addition to those, I also wanted to add in some flying bounce effects like this tag team. Each of these is a nice-sized force that can bounce an opposing dork on arrival. Riddlemaster Sphinx is bigger and thus a little more fun after arrival. However, the Dream Eater rocks flash, and can surveil deeply into your deck on arrival to the battlefield. Its potential bounce targets aren't just dorks, but can also be anything that isn't a land. That yields a strong force of flexible abilities plus plays into your counters as you can bounce something and then counter it to end it.

Speaking of counters, hello Draining Whelk fans! Here's a flying counter spell for your enjoyment. I want to add in more options for our utility and flying fans.

This is the same casting cost as Mulldrifter here, but it's beefier, retains its flying and the draws three on arrival rather than two! Now sure, you have to put two from your hand back, but a Brainstorm from a dork that just arrived on the battlefield is very good in our Kefnet build that wants to be about both cards and flyers.

Speaking of that, I want to toss in a few normal cards. Lightning Greaves is great to protect Kefnet or other key dorks and to add the expected haste. It's also a virtual essential in many builds. (I also added in Sol Ring and Pilgrim's Eye).

Bident of Thassa is where it's at though. Since my fliers are evasive, and since I need to draw a ton of cards, the Bident is a fun way to lean on both! Punch people's faces and draw many a cards Card drawing matters!

This is my final card for your consideration before I dig into lands. You need to protect your team. Targeted removal and effects like Swords to Plowshares, Cyclonic Rift, Chaos Warp, and Beast Within are very strong and commonly played at the kitchen table. Enter Kira, who will spin bubbles of love around your team. Kira is a very strong addition to the deck as a key form of protection.

Who wants lands? Who wants flyers? Faerie Conclave and Blinkmoth Nexus are both cool additions to any flying build as they...fly. If you have tapped down opposing stuff with bounce and similar effects, and then you should be able to swing over.

Now I know that you want to add cards to your hand. Kefnet can only mix it up when you have 7 or more cards in hand. You need to stop being forced to discard, and that's where Reliquary Tower plays. It's an essential here. For that same reason I am going to toss in Venser's Journal.

And then that's it; let's take a look!

Note that all of these cards are in stock here at CoolStuffInc.com. These are the cheapest near-mint versions available. Please note that these prices can evolve from when I wrote this article to when you read it.

And there are my additions. And I came in under the $100 for you folks too.

I can't wait for you to try out the Kefnet deck! I hope that you enjoy it, and let me know what you think of it. Tomorrow we'll turn to Mono-Black and a certain graveyard loving theme. I hope you'll join us!