Magic is about more that the game mechanics. Mana. First Strike. Combat Phase. Discard. Those are game elements. One of the reasons Magic has succeeded is that itâs more than a game, like Chess, which is nothing beyond the pieces themselves. Itâs about the story. The characters. The world. It lives and breathes.

Given the importance that art, flavor, names, and more come together and both evoke a world and tell a story, we are lucky to play it. And Magic lives outside of cards. We have comics, books, short stories, board games, video games, and more. They tell stories do. Itâs not just cards like Hanna's Custody or Dramatic Reversal. The game has life. And the characters are one of the most vital parts of that.

Planeswalkers are certainly the most iconic aspects of the game. From Urza to Jace, we have a number of âwalkers that define the story and the game. And there are many we have never seen printed in card form that could see the light of day. Which Planeswalkers do you want to see made flesh?

This article follows from last weekâs where we looked at non-Planeswalkers that havenât seen print yet, but should. Well, that obviously leads to this weekâs look at Planeswalkers that havenât seen print either. Most of those on this list are old school âwalkers. Given that the power level on older âwalkers was very high, you had issues showing them in any sort of card form. For a while, the mechanics of modern Planeswalkers was deemed to be too weak for them. But then we got them. Take a look at Freyalise, Llanowar's Fury as a great example of an old school âwalker done quite nicely.

We have reprinted lots of old school characters in Commander sets or Time Spiral Block. But weâve barely scratched the service on major Planeswalkers!

Below are ten Planeswalkers that we really could use a blast of Magic to bring them out of the dark and into the light of modern packs and sets today!

Ravi, aka Grandmother Sengir, would be a really cool character. In simple terms, she is a Planeswalker who uses the Apocalypse Chime to destroy a bunch of stuff, and then goes mad and turned by the Baron Sengir into Grandmother Sengir. She teaches Baron Sengir how to use Black and Green mana. So I think a pre-Chime Ravi with all of her abilities would work. Make her Black and Green, and then something that works with what she already does. You could have her +1 to put a -1/-1 counter on a creature, for example. You could build her from there. But she's pretty cool. 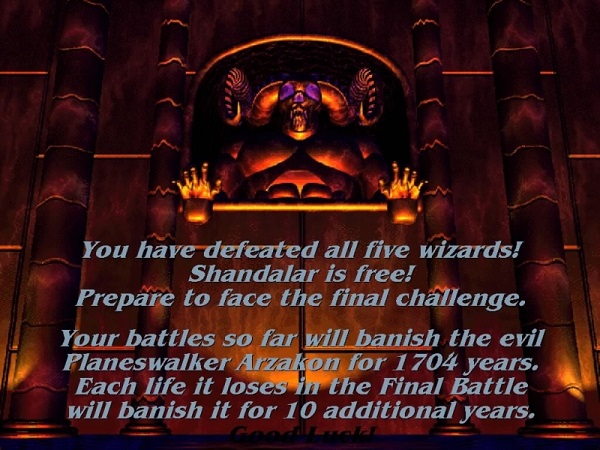 Arzakon is the enemy in Shandalar, the video game from Microprose back in the mid 90s. The plane of Shandalar was introduced, and then used in a variety of sets since as a sort of generic fantasy plane. By the by, I would love to see a full set on Shandalar. Anyways, in the video game, a world shield was placed centuries ago to keep this very mana rich world from Planeswalkers after our #4 and #3 below came to party. Arzakon has grown very interested and convinces the five leaders on the world, one in each color of Magic, to cast a spell that will give them power, but in reality, will destroy the world shield and allow Arzakon to arrive on the plane. You fight Arzakon at the end, and he has a five color 100+ card deck with all of the most broken cards in the history of Magic, such as Black Lotus and Moxes. I know it might be the fan boy in me, but I think that seeing a nod to Arzakon in card form would be really interesting. 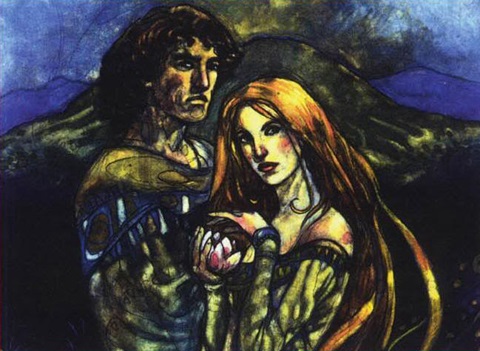 I like Feroz. He's odd. He's married to Serra. He thinks summoning creatures is wrong. He is a protector of planes and people. But he's not afraid to mix it up, and in fact, he kills one of the most powerful Planewaslkers of all time, Taysir, when he started causing some problems out on Ulgrotha. 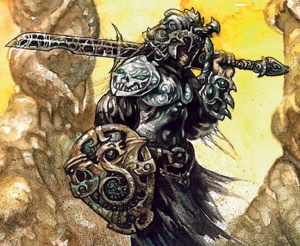 We don't currently have a W/B/U Planeswalker, so Dakkon would be the first. Whatâs great is that you might normally expect this color combo to be something Esper infused, with artifact loving. But thatâs not where Dakkon is. He was a very gifted smith, who made the Blackblade in order to be made into a Planeswalker, and he kills a slave once a day for ten years to slake its thirst and to create one of the most powerful weapons of all time. He uses it against many on Dominaria to try it out, and then his spark is ignited, and his sword taken and his shadow and soul sucked into it and destroyed. Now he is a shadowless, soulless Planeswalker wandering and looking for revenge and the blade. (He does get it later on, after killing Sol'Kanar, the Swamp King who had it, so you could show the fully bladed version instead, but I like this early Dakkon one better). 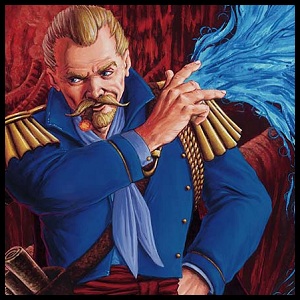 Like Freyalise and #3 and #2 below, Bo Levar was one of the Nine Titans, named after their leader, Urza, who took them to Phyrexia to destroy the entire plane and thus end Yawgmoth and the Invasion. He is pictured in a few cards during the Invasion Block storyline (such as Planeswalker's Mischief). And he doesnât have a silly name either (Iâm looking at you, Commodore Guff). Anyways, Bo is a smuggler, who sends goods from plane to plane and makes the cash. You could do some interesting stuff with a guy who hops around selling things and making a sick profit.

5. The Aspects of Taysir

There are five Aspects of Taysir on Rabiah the Infinite, home plane of Arabian Nights. One in each color. It is prophesied that Taysir would become the most powerful sorcerer of all time if his five aspects were combined into one body. So I think it would be cool to have those individual aspects. Blue Taysir, Red Taysir, etc. The White Taysir, for example, is a dervish. Red is a Nomad. Green a herder, Blue a baby who is protected by El-Hajjaj to keep him safe, and more. After the Sorceress Queen Nailah seduces him, the Black Taysir assassinates and absorbs Green, and then it starts.

Introduced in Ice Age, Leshrac is a major foe. Heâs also regularly linked with night and darkness, and you could use that for some mechanics. Shoot, even the Myojin of Night's Reach works with him. Leshrac and Nicol Bolas are major foes, and they have a final battle that rages across plane after plane after plane, with pieces of Nicol Bolas falling all over, until Nicol Bolas finishes off Leshrac and regenerates with a hidden artifact he took from the Myojin and kills off Leshrac permanently. Leshrac is a strong choice for a Planeswalker card. 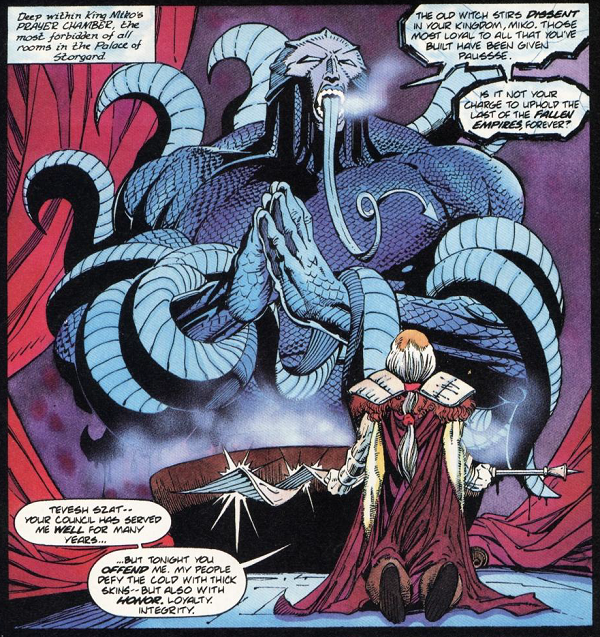 It would nice to have a Mono-Black Planeswalker that is neither Ob Nixilis nor Liliana. Sorin Markov is the only one we have, but then he went all White/Black moving forward. Both #4 and #3 would get you Mono-Black entries. Ally of Leshrac, another one of Urzaâs Nine Titans we talked about above, one of the long-ago invaders of Shandalar that led to the world shield being put around it later, and a major pain for a lot of people. Thatâs TeveshSzat in a nutshell. A major antagonist for the majority of his career, and Urza kills him on Phyrexia to use his energy to fuel the Soul Bombs needed to blow up the plane. You can see his picture on Planeswalker's Scorn and Dark Suspicions. So we have him already. How about a second ability thatâs -X and reduce a creature by -X/-X for a turn, like he does with the Scorn, Minion of Tevesh Szat, or Disciple ofTevesh Szat perform?

2. Taysir, One Made of Five 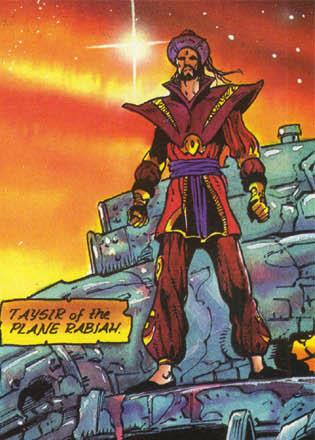 Taysir should be the first five color Planeswalker. Taysir plays into a lot of places in Magicâs history. He was one of the first in the lore of the game. He was a villain and hero in roughly equal measure. You see him in Ice Age, Homelands, shoot, heâs even one of the Nine Titans Urza takes to Phyrexia to take out that whole plane during the Invasion. After Urza brings Szat to the plane, over the objections of everyone else, and Szat kills two âwalkers, and Urza reveals he knew Szat would do so, and thus could be used to fuel the Soul Bombs, Taysir is pissed. When Urza sees how beautiful the plane of Phyrexia is, he stops fighting, and then as Taysir pushes the cause, Urza slays him only with a kill switch in Taysirâs armor, made by Urza to survive on the plane. Taysir is a major player. Oh, and I think giving him the, âThis can be used as your Commanderâ text would give him an obvious home for Commander leading a five color friends deck. 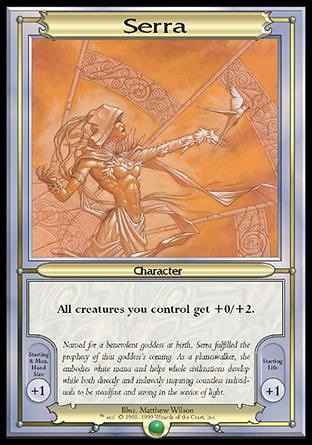 Duh. Could you do Serra right? I hope so! Sheâs one of the most iconic Planeswalkers of all time. Serra is the maker of Angels, planes, and joy. She inspires Serra Paladin, Serra Inquisitors, Serra Zealot, and more. Her and Feroz live on Ulgrotha and fight against Baron Sengir. Her own plane she made is destroyed by the Phyrexians chasing Urza, and the absorbed by Urza to make the Skyhip Weatherlight work. Serra is clearly a White Planeswalker and thus could be an interesting character. You could make her second ability something like -2, create a 4/4 Angel token or something similar.

Note â I am not 100% sure the Aspects of Taysir are considered Planeswalkers or not, or if Taysir's spark is only ignited when they all are absorbed and brought together. However, if they are deemed to not count as âwalkers in their current iteration, how about making them flip-walkers? Normally a creature, but with a flip trigger that suggests their âkill and absorbâ with other Aspects? Thatâd be really awesome too!

Much like, in the last article, I doubted you could ever do Yawgmoth justice as a legendary creature, you could never do Urza justice either. Iâm not sure Urza could really be a card without disappointing an awful lot of people. But those are all good to go.

What did you think of my list? So what would you like to see? Anybody not make it you expected to see?