What makes a show like Gen Con a success for more than forty-two years? It isnât a question Iâve really thought about until recently. What started as a small gathering in Lake Geneva, Wisconsinâthe Geneva Convention, where Gen Con comes fromâis now a gaming destination packing fifty thousand or more attendees into Indianapolis, Indiana this year. After attending a couple years to see the sights and share the sense of it, Gen Con has grown on me in a way I didnât expect.

I donât care for huge crowds and long lines. Thursday morning, I queued through two hours of lines to grab my press badge (the reason youâre reading this article) and early entry into the exhibitor hall (to take a bunch to photos without getting in everyoneâs wayâor the other way around at least). I hate queues and actively avoid them at events since thereâs always fun happening.

It was just the beginning. Before the end of just the first day, I had enjoyed the best shrimp cocktail in the world, acquired the fuzzy Funko Ajani, watched folks draft a Cube consisting of Magic cards from 1994 or earlier, learned games like Star Realms, Conquest of Speros, Captainâs Wager, and Run, Fight, or Die!, talked to over a half dozen Magic artists from across its twenty-year history, run into more friends than at any Grand Prix, seen some of the best cosplay on the planet, and experienced probably dozens of smaller moments I canât recall in the blur of awesome. 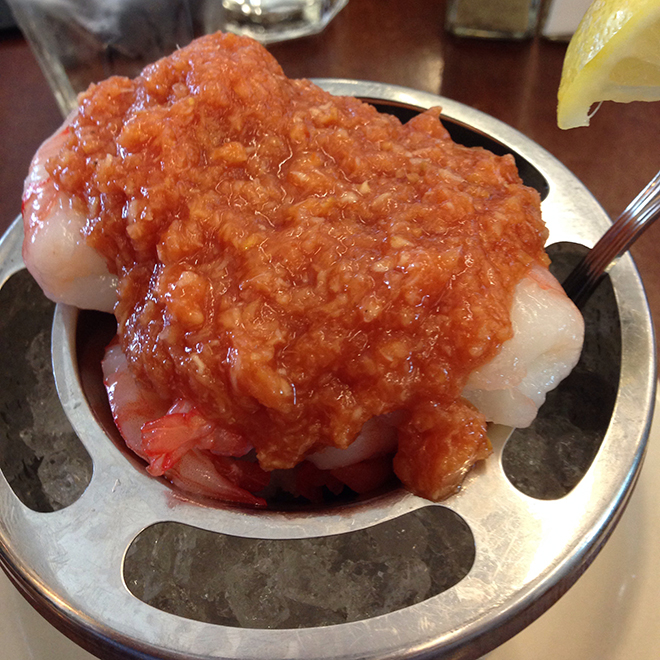 But donât take my word for it.

Gen Con is an event of the people, for Magic and players of just about every tabletop game you can imagine. While it doesnât have the reputation that Grand Prix and Pro Tours carry for those who sleeve up Magic to play, Gen Con is among the best places to learn and share the game. Itâs an atmosphere of openness with a mood opposite of anything competitive. Friends with Commander and Cubes glom together into Draft-pod-sized packs playing at every hour, day, or night. Itâs a manic run of card slinging that puts anything else Iâve ever seen to shame.

Itâs a seemingly unending time to be social. Itâs time âto hang out with friends,â artist and Cube designer Eric Klug said. âThatâs the honest answer: to be with people I donât get to see all year.â Klug, who started the day Cube-drafting and who had to be interviewed in the middle of one, doesnât stray far from the hall where Magic is played. Last year, there were âten to fifteen Cube Draftsâmaybe moreâ that Klug fit into just four days. Even assuming long hours grinding it out, thatâs a lot of drafting over a âlongâ weekend. 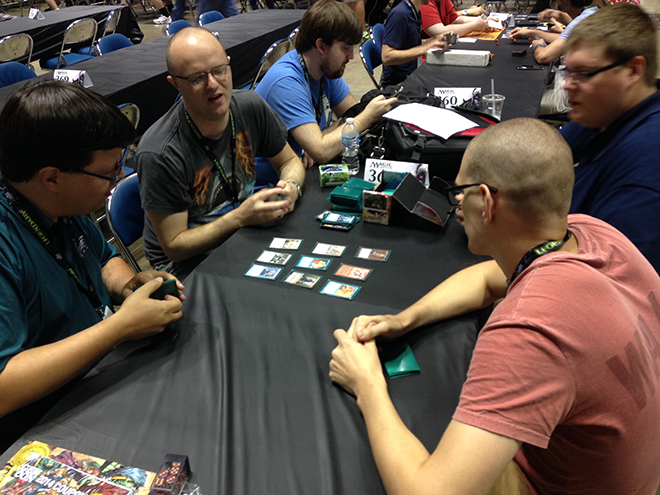 Thereâs more to Gen Con than Magic, of course. For Andrew Sitte, an artist who makes 3D versions of cards, âItâs a place where I can play certain games that I love that have been out of print for a while; plus, I get to hang out with amazing people I donât get to otherwise. Seeing and doing things I canât do anywhere else.â 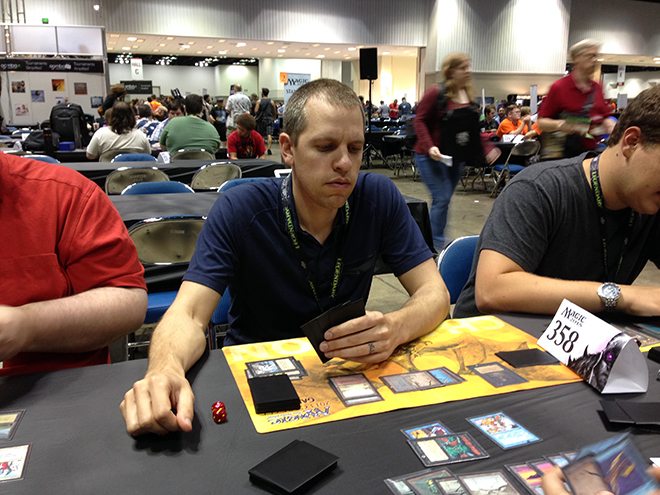 Sitte had a simple plan for the weekend: âDoing a lot of Cube-drafting; trying out new games in the dealer hall. Last year, I was finishing up the 1994 Cube and went out for some amazing food. Every year, I push myself to do a lot more non-Magic stuff. Thereâs a lot of things out there to try.â

Paul Neubauer, celebrating over ten years of Gen Con, looked incredulous when asked why anybody would come. âItâs fun! Why would anybody come to Gen Con? For fun! We play games, learn new games, and meet people.â

Neubauer didnât start as a Magic player for four days of gaming. âIâve been coming to Gen Con since it came to Indianapolis: 2003. We were playing Mage Knight then. We started off when my son spotted Mage Knight when we were looking for PokÃ©mon. Heâmy sonâstarted dragging me to Mage Knight tournaments. They have tournaments? Well, I guess Iâd better start to play. When Mage Knight fell away, we all switched to Dungeons & Dragons Miniatures. We just kept coming to Gen Con and having fun.â 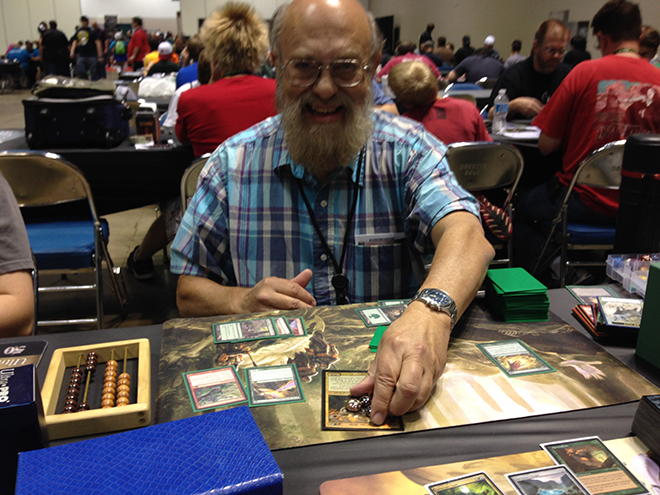 Eventually, Magic popped up as it does for so many who learn: A friend showed him the way. âAbout two years ago, our Dungeons & Dragons group had pretty much died, drifted off to other things. One of the things was Magic,â Neubauer said. âWe played fairly casual, some Friday Night Magic, but not heavy-duty tournaments. Then, we realized Commander. Thatâs just a plain, fun game. Itâs mostly what weâve been playing for the past year. Then, I pushed on our local game store and got a bunch of people interested in Pauper Commander. Itâs totally differentâand we will play mostly regular Commanderâbut itâs a total change of pace. You see cards you donât see anywhere else. Youâre forced to build something clever and really look for ways to make a deck to work.â

âSomebodyâs always got something new, interesting, and different. If this game didnât have crazy things that could happen, it wouldnât nearly be as much fun, would it? Thereâs always something that can happen; you just donât know what it could be,â Neubauer said. âBut weâll still play Mage Knight with a few friends for old timeâs sake. Weâve forgotten so much, but playing with friends is still fun. We have lots of laughs.â

I meant it when I said Magic isnât the onlyâor even bestâreason to come to Gen Con to game. Aaron Belmer is the designer of Conquest of Speros, a game from Grey Fox Games that I really enjoyed. While I had a brief chance to playtest it back in February, the full game put many improvements in place and felt far more polished. 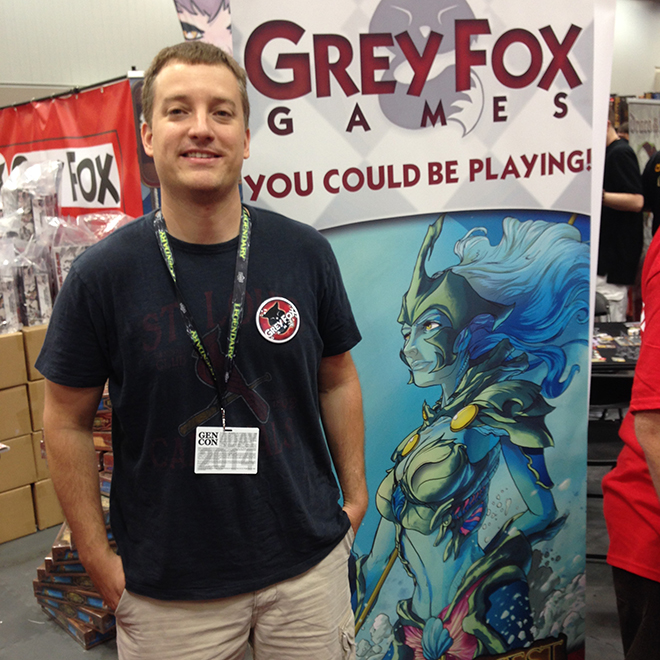 What struck me in both testing and demoing on the floor of Gen Con was how it echoed some of what I really liked about Magic: My hand, drawing cards, and using abilities at the right time all mattered. I grabbed Aaron Belmer, its designer, to see what the story was.

âAll through the â90s, I was a Magic player,â Belmer said. âIâm sure there are influences all through there you recognized. I think I got out during Odysseyâthatâs when I made my transition to board games. A couple of us, from time to time, will play our old decks. I have my old Hypnotic SpecterâandâLord of the Pit deck; Iâve kept about six decks together total. I have a lot of respect for the design of that game.â

Conquest of Speros didnât start as a riff on Magic. Its inspiration came elsewhere. âMany times, Iâll get ideas late at night. Usually, I canât sleep, and Iâll think of all these ideas I canât get out of my head,â Belmer said. âFor Conquest of Speros, it started with hand management, and it was about collecting the most symbols. I like to imagine people playing and how theyâre playing. In Magic, youâll see players leaning forward, really engaged in whatâs going on. I wanted to do the same thing. At the same time, one of my favorite games is Chaos in the Old World. Itâs a four-player conflict with area control, by Fantasy Flight, and players are really engaged. I wanted it card-based and streamlined, doing that in a different way. I also have a personal goal. Every designer has their style, and I want to make the biggest games with the fewest components possible. My target is a $20 MSRP with everything in the box, which is where we ended up being with Conquest of Speros.â 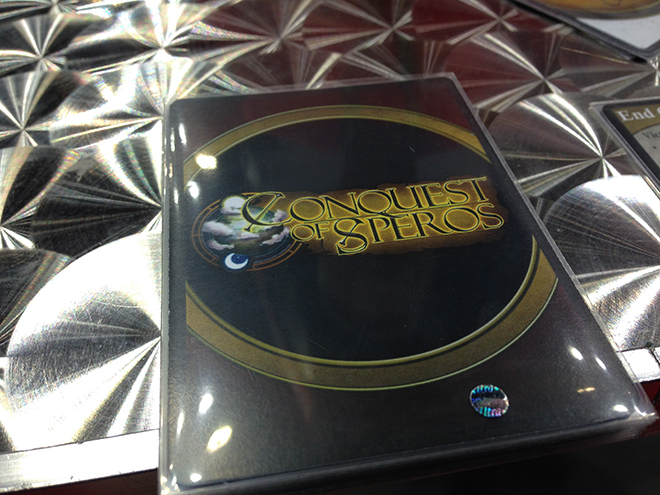 Why does Belmer think Conquest of Speros is a hit among Magic players? âIn general, the three biggest draws for me and Magic players are hand management (âDo I necessarily spend this?â), resource management (âShould I do this?â), and player conflict,â Belmer said. âA lot of board gamers donât [like conflict], but Magic players do: They want to get in your face, exile your guy, and attack. The core mechanics that make Magic tick translate well to this four-player game.â

Like with Magic R&D, Belmer was willing to share a lesson he learned in bringing Conquest of Speros to life. âIâve noticed in the design world thereâre two types of people. Rarely do they have both of the skills, but the ones that do are great,â Belmer said. âThe first are guys with tons of ideas and just keep coming up with them. Theyâre like a fount of things to try. The other are game breakers, which are like most Magic players: somebody that can really play your game, and in just a game or two, find a way to win all the time or take the advantage and âbreakâ the game. Theyâre always looking for ways to get their opponents.â 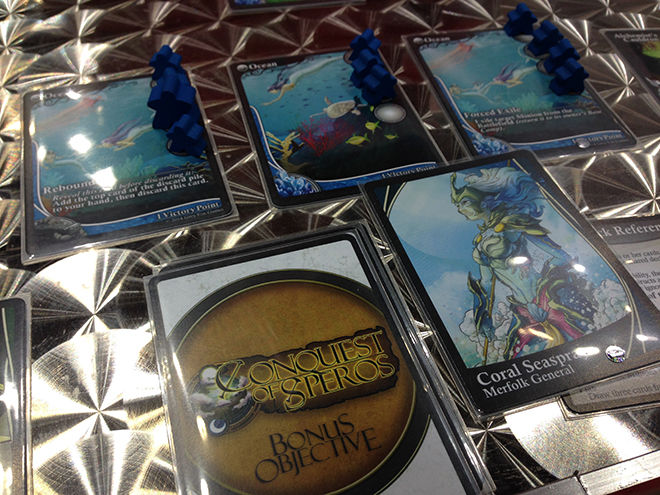 âA lot of early testing showed some holes they showed,â Belmer continued. âOne was how the generals worked, and early on, we found it was breaking things. I met a guy named Ted King who helped me tighten things up. Without my game-breaker, I never would have found the things I did, and now heâs part of my group, and I run everything by him. And Iâve definitely learned to appreciate people who make the game as a team. The fact that the artist (Andre Garcia) was amazing on the game and Shane [Myerscough] was great on production, this would never have been made without a great team effort.â

Gen Con is huge. This small sample behind one game, with a ton of moments captured by the community, arenât nearly enough to explain everything. Gen Con stands alone as the greatest of gaming destinations, and itâs an experience I never imagined possible.

If youâve been to Gen Con, Iâd love to know what you thought of your time. Whether it was years ago or in the halls passing me by, the size and scope of the greatest four days of gaming paints a bright futureâfor Magic and beyond.