There have been many squeezes in Standard - moments where decks are forced to fight between two very powerful forces - and we are in one now. On one end, we have the brutal, but expensive Nexus of Fate, and on the other, we have... many 1/1s.

Oh, Curious George, how wonderful is it that you are now a power in Standard!

I can't help but think of the newest iterations of Mono-Blue Aggro as "George", the newest iteration of Curiosity decks to see success, going all the way back to the '90s. Way back then, I'd founded the Magic think tank Cabal Rogue (which brought you Junk, Stompy, The Rock, Secret Force, Ponza, and many more decks), and one of our illustrious members, Mike Donais, created a secret weapon for Tempest Block Constructed. He named it "George", and it was taken by Gary Krakower to win the first Grand Prix Austin.

Here is that first deck:

A strange deck, indeed. If we were to take this deck, and put it on the Strategic Archetype Circle I discussed a few months ago, it would probably be just into Hybrid Control territory - at "9:05" if we imagine the circle is a clock, give or take. 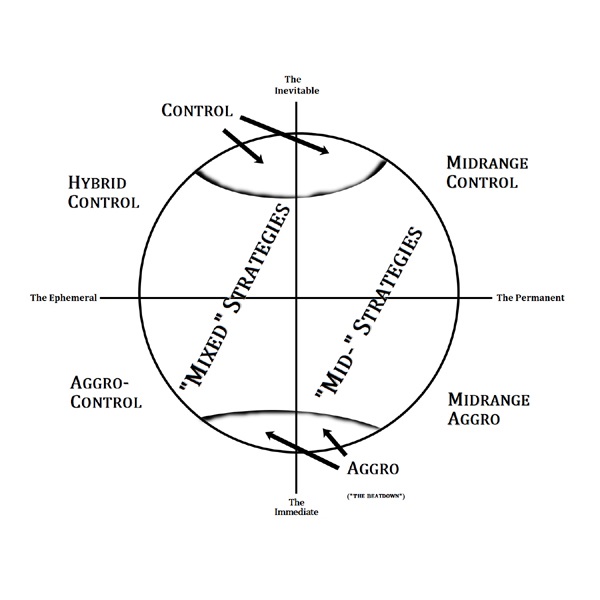 The current deck is faster, albeit not so fast I'd call it "aggro"; probably it would reside somewhere around "8:45", if we imagine the above circle like a clock.

Here is the most recent winning version of the list, taking a list Alexander Hayne published online, running with it all the way to the trophy in Dallas:

So, with this deck just tearing up the world, repeatedly, what do you do if you're going to try to beat it?

One of the best things you can do is to go fast and wide enough to put the Blue deck on the back foot. There are a bunch of great, fast White cards, and putting pressure on the Blue deck can put them to decisions that are difficult; they are designed to stop a single play in a turn, not multiple plays, and they want to be able to attack. Pushing them into a position where they can't do this is rough.

One thing that is especially true right now: Sleep used to be a particularly big tempo play that the Blue deck could sideboard. Now, they are going to slip into a different plan of Exclusion Mage, Faerie Duelist, and Entrancing Melody, backed up by Merfolk Trickster. This is still powerful, but it is a bit scarier for them, to be sure.

One of the first things that became clear with Ravnica Allegiance was that you didn't need Red anymore to be explosive. Unbreakable Formation is a damned house.

Once you break away from Heroic Reinforcements, there are only a very few incentives for Red, which means you get to focus on stable mana to just get the beatdown done.

Tithe Taker wasn't a card I initially included in my list, but the first time someone played it against my build of Blue, I was shocked at how much it messed up my plan. Just being a solid card overall, Tithe Taker has play against everything you might face down, either being a resilient body or a massive pain, depending on the deck.

Silverbeak Griffin started as a joke the moment I had my first 2/2 Healer's Hawk in play. I was reminded of the card because of one of the training decks in Magic Arena that was essentially full of Silverbeak Griffin. Then, after laughing, I thought about the Blue mirror and how much a pain a single 2/2 flier was, essentially requiring an X/4 or 5/5 to get through. With that in mind, I tried out a few Silverbeak Griffin. It wasn't phenomenal, but it was solidly good, and I'm currently trying a pair out, and still happy with it.

To find the room for this, I cut into Adanto Vanguard and Snubhorn Sentry. Without the History of Benalia, I'm still strongly considering cutting Snubhorn Sentry, but for now it still is in the deck. Adanto Vanguard, on the other hand, is a card I have strongly mixed feelings about in the deck. I love it against a ton of opponents, and it is a hell of a beater, but it feels absolutely horrible when you march it into a Merfolk Trickster. I still want 4 in the 75, but, I'm hedging a little given the expected Blue menace.

Mister Beats, Tom "The Boss" Ross, came to a few similar conclusions with his 10th place finish at SCG Dallas:

It makes me feel good to see parallel development like this. You can see that he is definitely looking for that City's Blessing, running four Snubhorn Sentry and four History of Benalia. We've each shaved slightly different things, but coming to the same basic conclusions as another person is always heartening.

There sure are a lot of tiny creatures in Blue.

Why not just work at killing them all?

My friend Jody Keith had one take made up of two scary creatures for Blue, Goblin Chainwhirler and Rekindling Phoenix, and then added on Siege-Gang Commander to really make it a pain.

There are a few fun choices in the deck (Status plus Goblin Chainwhirler, anyone), but most importantly what I like about this deck is that it is chock full of ways to make a Blue deck like "George" struggle. The deck has at least some amount of legs, too: it's already gotten high finishes in Magic Online.

Speaking of that fun choice, check out this deck which really, really goes for Chainwhirler/Status:

Even without the "cute" play of Goblin Chainwhirler into Status, there is still value in Statue in this deck, since it can actually cast it. It adds Skarrgan Hellkite into the list of creatures that are an actual, factual real problem.

Of course, we can just keep it simple.

Again, like my Tom Ross moment, I was pretty pumped to see that I was basically running exactly another player's successful list, at least in the main.

Why mess around? Just keep it simple.

The card choices, at least from my end, were a lesson in real estate; there is only so much space. If I could, I'd be playing 4 Fanatical Firebrand and 3 Experimental Frenzy, but I literally want four of every single other spell, so something has to give. You want all eight of your Wizards, you want all of your burn spells, and you want your four Light Up the Stage. Runaway Steam-Kin is a great way to overpower Blue in some games, so you want all four.

After sideboarding, I knew I wanted Rekindling Phoenix, and once I knew that, you end up making a lot of other decisions that can push you into a more controlling role in some matchups; I'm not running the Dire Fleet Daredevil plan that VitorBessa is, nor am I running Fiery Cannonade, but I haven't yet adjusted to a White Aggro world, so maybe I'll include the Fiery Cannonade like they did.

Here is my sideboard:

I still love "George", the fabulous Curious Obsession deck that could. I very much might play it next week at the Mythic Championship in Cleveland. In fact, I was absolutely planning on doing so before it blew up big. I'm not as sure how I feel about the deck in a world where very smart people have been playing it endlessly in the mirror and thinking about how to defeat it with other decks.

Whatever I play next week, I'm excited to see the deck doing well. And I've been laughing to myself thinking about pop culture Curious George references.

I hope you enjoy this one - it's probably my favorite.

Next week I'll be in Cleveland - wish me luck!