Like a lot of people, I found the War of the Spark trailer pretty compelling.

If you're living in the Magic equivalent of "under a rock", here it is:

There are already a ton of cards that have been previewed. I wanted to focus on just one that took my fancy: 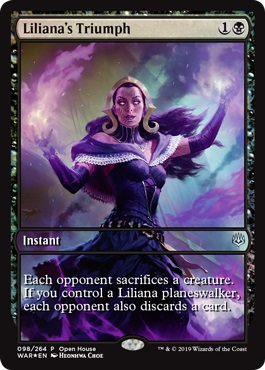 This is a hell of a card.

To get a sense of why I think it is so good, I think we need to go back in time a bit to a few decks I've played to moderate success in the past in Modern.

I really loved this deck a bit, but I can still see the mistakes in it, the biggest being not enough Twilight Mire, which definitely could have fueled a Treetop Village or three. This was a crazy era in Modern. Deathrite Shaman was ridiculous. I called this deck "Obliterator Rock", but more realistically, this was Deathrite Rock.

Deathrite Shaman would be so powerful that it would get banned. It was powerful enough in this deck that I played Hypnotic Specter (crazy on turn two) and Phyrexian Obliterator, both as four-ofs.

Not a four-of, but hidden in the deck is a card I played as a removal spell and a discard spell.

Without access to Red, the deck wanted some more cheap removal, and it also wanted some cheap extra discard.

I did the same thing, way back in the day at Regionals.

Here, Funeral Charm strong enough to be a four-of.

The card was even in my first build of PT Junk that was at Pro Tour Chicago 2000 (though I didn't include it in the later builds that were actually great).

The thing about a Funeral Charm was that it might not have been incredible, but it did a lot of work out of sheer versatility. Importantly, it also did something quite horrifying for the opponent:

It could eat a full draw step.

If your opponent was empty-handed, you could win an incredible amount of games simply by getting rid of a draw step here and again by knocking out their card as an instant. This didn't happen constantly, but it was powerful enough that in the games where it happened it was devastating.

The fact that it might kill a creature was important too.

So, when I was looking at Liliana's Triumph, I immediately went back in time to locking out the opponent's draw step. It took me back to Kolaghan's Command and Snapcaster Mage.

Now, granted, the card is usually going to be an "Edict" like Diabolic Edict. But, it's not as though there aren't compelling reasons to play Liliana of the Veil, and it's not like Liliana's Triumph isn't absolutely incredible when you get to make them discard too.

Here is a simple take on the deck, heading back to good ol' Rock - Golgari Midrange, if you prefer - with some room made to play the Triumph. I know that I want a large number of Liliana of the Veil, but otherwise, I'm just going to do some fairly normal Rock-ing.

This build is heavily piggy-backing on Luca Finazzi's build of the deck in GP Calgary, where he finished in the Top 8. Clearly build in a land of Phoenix, it respects the graveyard intensely, running Kalitas, Traitor of Ghet, Nihil Spellbomb, and Scavenging Ooze, though it still can run into a game where a Phoenix runs away, in many cases, it is good at getting that deck well in hand.

In this build, even Izzet Phoenix can have an issue getting aggro going because despite how the discard can enable a Phoenix by placing it in the graveyard, it can also chop a hand down enough that it can be hard to play several spells. Add onto that the incidental graveyard suppression, and the deck can potentially make moves to keep the world completely clear even after the most absurd Phoenix explosion.

The deck isn't just warped to fit in Liliana's Triumph; as a cheap, removal spell, it adds onto the deck's ability to get just a little further into the game, potentially while tearing down the stockpile they mgiht use to recover. It feels perfect.

Even better will be to take this deck to an archetype that is already currently using Funeral Charm, and imagine where we might fit in Liliana's Triumph.

This is a hard one to think about. My first thoughts are in the easiest category: Smallpox. Do we need to be a Smallpox deck. Every time we cast Smallpox, if they don't have a creature we are losing out on cards, and if they do have a creature than we are breaking even on resources. However, when cards are being taxes, losing a land can be very difficult for an opponent.

My initial thoughts are just three Liliana's Triumph, cutting into two Smallpox and a single land - probably an extra Legendary Land in Urborg, Tomb of Yawgmoth, which we can only run so many of because we're planning on sacrificing it. It might also require actually replacing an Urborg with a Swamp if we cut two Smallpox, but that will require a bit of experimenting to determine.

After thinking about it, I think this idea might just be heresy.

Perhaps the better thing to do is to drop those Funeral Charm entirely, and shave the deck in another way.

There are few decks I'm looking at getting to play Liliana's Triumph in more than this! What a great time to be using The Rack!

This might have raised the curve too significantly (replacing three 1-drop spells with three two-drop spells), so some experimenting is likely necessary.

This card is just so powerful, I expect to see it pop up in Legacy.

It seems like an immediate upgrade for nearly every Legacy deck that has Diabolic Edict in their sideboard to replace it with Liliana's Triumph. Unless they are concerned about the need to use Diabolic Edict on their own creatures, Liliana's Triumph is just an upgrade not just because of the potential bonus, but even if they don't play a Liliana planeswalker, because it gets around the need to target a player.

Speaking of Legacy, I've decided I'll be playing at Grand Prix Niagara Falls. If you have any handy thoughts for what I should play in my Death and Taxes deck, I'm all ears!

Break out your Lili's! Now is the time!