Commander Legends gave us a trove of fun cards for casual play. They were designed for multiplayer Commander as well as for Limited. Yes, you can draft them, but let's not forget the format of Jumpstart, which allows you to curate your own Limited experience and share it with your friends. Designing your own packs is like Cube but requires less of a commitment. You skip the draft and start swashbuckling.

This week we're taking to the high seas as pirates. The original Jumpstart box included two piratical packs. We're adding to that and concluding with a fourth pack of Black elves. But first, the booty!

It would be a shame not to use these new pirates at every opportunity. Breeches, Brazen Plunderer served alongside Malcolm, Keen-Eyed Navigator on Vraska's ship, Belligerent. In this first pirate pack we're aiming to be aggressive, with multiple 2-drops and combat tricks. You can even build your own Embercleave with Buccaneer's Bravado cast on the same creature as Run Amok. We also have a trusty Pirate's Cutlass to help our creatures break through defenders to get at that buried treasure.

The pack includes some potent cards such as Fiery Cannonade and Port Razer. I aim to have five total rares and or uncommons in each pack. Since this one has an additional rare in Emberwilde Captain, I abstained from the premium removal of Lightning Strike you'll find in the next merry pack of pirates. Of note, the Emberwilde Captain is particularly good in this aggressive shell. Not only does the creature have high power, but after putting your opponent on the defensive, forcing them to commit blockers to attacking is especially punishing. You may also note the most humble member of this crew, Swab Goblin. Every good Jumpstart pack should have a few bad cards, to build character. Not only are they funny, but it's a fun challenge to still win with them.

A quick note on Daring Buccaneer. It may seem a natural inclusion as an aggressive creature in a pirate pack. But remember that the other half of your deck may be full of thallids or something hardly scurvy, and your opening hand may be full of Daring Buccaneer, no other pirates, and sadness. Two-drops are mostly as good as 1-drops, so we're avoiding the feel-bads of this buccaneer.

Our next Red pack takes a different tack. Rather than surprising opponent ships with quick creatures, we're barricading ourselves below deck as we gather treasure.

Once we accumulate enough treasure we cast Dargo, the Shipwrecker. In fact, if you sacrifice two treasure tokens he only costs one more. Treasure mana also enables pricy pirates such as Boarding Party. The glittering gold makes Fathom Fleet Swordjack fiercer. You can evil load the booty into a cannon and fire it off with Makeshift Munitions.

We have another creature that bestows monarch, Crimson Fleet Commodore. Imagine picking up a crown from the loot pile, taking off your pirate cap to put it on, then breaking out the rum in celebration.

Let's sail on to the charted waters of Blue pirates. Since we've had two previous packs, I'll only build one new one. First off, I considered the rare Hullbreacher but decided it was too niche for Jumpstart. I would rather spend the rare / uncommon slot on something more exciting, such as Ghost of Ramirez DePietro.

In this pack we have multiple legends and the opportunity for some legendary fun. For one, Amphin Mutineer can turn our crewmates or our opponent's bombs into salamanders. We'll have the late game on lock thanks to our creatures with encore, but we can also apply pressure with our evasive threats that activate raid. Cloud Pirates excels at these early skirmishes, and I find the art hilarious. If you have difficulty locating a copy yourself, you can substitute in Mothdust Changeling.

In a previous article I designed packs for the ranger partners Hal and Alena. I mentioned that you have full control over how Jumpstart packs are combined. For yourself, they likely should be randomized, but to your guests you should extend more options. Especially if they are less practiced at Magic, feel free to grant their requests. Or if they do know the game and wish to see Breeches, Brazen Plunderer fight alongside his best mate, Malcolm, Keen-Eyed Navigator, feel free to humor them.

Our instants maintain that briny flavor. Sea Legs can keep two of your best cutthroats alive. Now, Run Away Together has Innistrad art, but with a name like that you can just imagine Keira Knightley absconding with some dashing pirates on the high seas.

Oh, and the best part of playing pirates? If your opponent is taking too long on their turn you can say, "Arrrrrrr you done?"

For our last pack we're coving Black elves. Look, I love tribal. It is true that it's unlikely your second pack will be dedicated to elves, but it's still fun to discover random elves in your other card pool and or changelings. In this case, any token generation will also synergize, even treasure from our pirate packs.

Pirates and elves work well together, who knew? Although it may be tempting to always hope for two packs featuring the same tribe, such as Elves-Elves, the greater joy in Jumpstart may well come from discovering these chances pockets of synergy.

This pack is interested in fighting an attrition war, accumulating tokens with Exquisite Huntmaster then buying the creature back with encore. We can grind additional value with Miara, Thorn of the Glade and Prowess of the Fair. We also found a great place for Birthing Boughs. I love the idea of the changelings tricking the elves, who are all about racial purity.

It bears mentioning that these elves value beauty above all else, and they see non-elves as "eyeblights" worthy only of death. Yeah, that's pretty gross. These are the fraught elves with which Nissa grew up and a large part of why her character has been accused of being racist. Though White is most often the exclusionary color, here we see intolerance expressed through Black. It's a fine line between the tribal separatism expressed by elves throughout fantasy properties and direct racial violence. 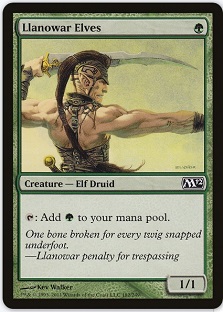