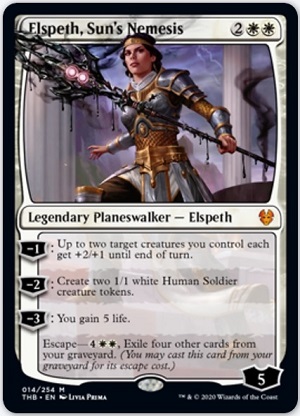 Heliod did Elspeth wrong. Now she's come back from the underworld to cut a god. She will slay anyone in her way, be they deities or your Oathbreaker opponents. This multiplayer casual format is more aggressive than Commander, with each player starting out at twenty life, and it's more focused in strategy, with fifty-eight-card decks and every Oathbreaker Planeswalker in the command zone paired with a signature spell. As long as your Oathbreaker lives, you can cast their signature spell, taxed two more each time.

Surviving a turn cycle is a big ask in Oathbreaker, especially when Elspeth, Sun's Nemesis claws her way out of the underworld and leads creatures with double strike. And if the cowards are too scared to play their Planeswalker, you'll route their life total instead while keeping yourself safe with lifelink. This deck maximizes Elspeth's ability to pump power.

In Commander, you may reach for cards like Cathars' Crusade and Anointed Procession to give you the value and power to execute multiple opponents who start at forty life. You don't need to go so big in Oathbreaker. What you do need is to sprint onto the battlefield to pressure opposing Planeswalkers and hamstring their strategies.

While it's still possible to overextend into a Wrath of God and lose, you're more likely to recover thanks to your Planeswalkers. I've included another Elspeth along with two Ajanis that most synergize with the deck's strategy of augmenting creatures with lifelink and or double strike. Non-creature cards like Umezawa's Jitte and Crusade will also add pressure while not over committing. Duelist's Heritage can help your creatures and other players, if they attack a common foe. Gideon Blackblade and Kytheon, Hero of Akros are also resilient and aggressive. 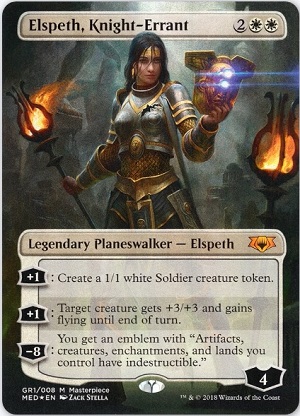 At last I'll have a chance to play my Mythic Edition Elspeth, Knight-Errant. Though some of the creatures I've selected already have evasion, such as Aven Sunstriker, giving them +3/+3 will still be righteous. You can see in Elspeth's recent Planeswalker art where Heliod, her god, stabbed her through the chest. It's equally true that he backstabbed her.

Seeing her come back for justice gives me life. Her minus-three ability does the same thing, and the deck has a life-gain sub-theme. The main payoffs are Serra Ascendant and Resplendent Angel. Having a high life total matters more in Oathbreaker than perhaps any other Magic format. Multiplayer games starting at twenty life make you feel as if your strategy is a glass sword: deadly but always close to shattering. Increasing your life total to thirty or more will turn your weapon to steel.

Elspeth, Sun's Nemesis does not have plus abilities or an ultimate. What she does give you is levels of aggression in White not seen since Jihad. If she dies, you can choose to either have her return to the command zone or go to the graveyard. And if all your creatures die to a Wrath of God, she can make more.

The deck is heavy on creatures and light on removal. If I were to play another it would be in the Oblivion Ring family, to exile problem permanents like Moat or Planeswalkers about to ult. Drawing cards isn't a strength of White or what this deck is trying to do, but we still have the strong Skullclamp and Mentor of the Meek. You can pump an 1/1 with Eslepth, equip Skullclamp, attack, and then draw cards at end of turn. As this isn't Commander, ramping isn't a priority, but I felt Knight of the White Orchid and Pearl Medallion were too strong to leave out. If you are looking for different cards, consider Soldier of the Pantheon, God-Eternal Oketra, Fabled Hero, and Student of Warfare. Those were my last cuts.

The deck is meant to be competitive, but I still chose certain cards for purposes of flavor. The signature spell Gods Willing will protect your critical creatures and give them evasion. Its art also features Elspeth. Otherwise, I would've chosen Brave the Elements. Along the same lines, I chose Crusade over the strictly better Honor of the Pure. 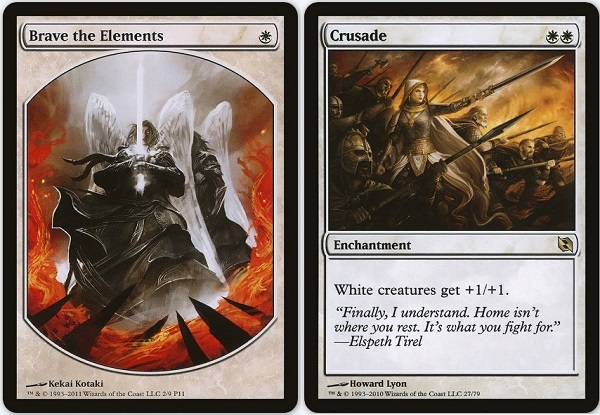 It's hard to say who has wronged Elspeth the most. As Heliod's champion, she slew Xenagos at his bidding; he then slew her, for killing a god as a mortal. In her youth, Phyrexians tormented her until she sparked. But the decisions to give a woman character a backstory of trauma, build her up, and then kill her, that was all the doing of Wizards of the Coast.

I cannot recommend reading the lore going forward, but in the past, Elspeth escaped the Phyrexian dungeon by Planeswalking to the utopia of Bant. She excelled as a knight, protecting the meek and leading the strong. She nursed a beaten Ajani back to health and so began their friendship. The more she battled with honor on Alara, the more guilt she felt, the more self-doubt. In the real world we might call it imposter syndrome. In a woman character we would call it a trope.

Elspeth wallowed in it, hurling herself into the Cabal pits on Dominaria, wishing for death. Koth helped her escape. She joined him and Venser to free Karn from the Phyrexians. She would've rather died than flee, but Koth once again saved her. She Planeswalked to Theros.

There she found Daxos. The two grew to love each other in one of the first wholesome relationships in Magic. Naturally, Wizards of the Coast wasted no time in killing Daxos in the most brutal way possible. We see him later in Daxos the Returned, wandering mindless and lost, searching for Elspeth, not realizing he left her behind in the underworld. I fear even more angst lies in store for the couple, with his new card suggesting he has returned to Heliod's side to oppose Elspeth.

Elspeth, Sun's Nemesis isn't the only heroine who has returned to Magic after years. Christine Sprankle first cosplayed as Elspeth at Magic Worlds 2011 in San Francisco. She was a highly visible woman in the Magic community. I wouldn't have thought of cosplaying myself if I had not seen her do it first. I and many others owe her a great debt. Welcome back, Sprankle! 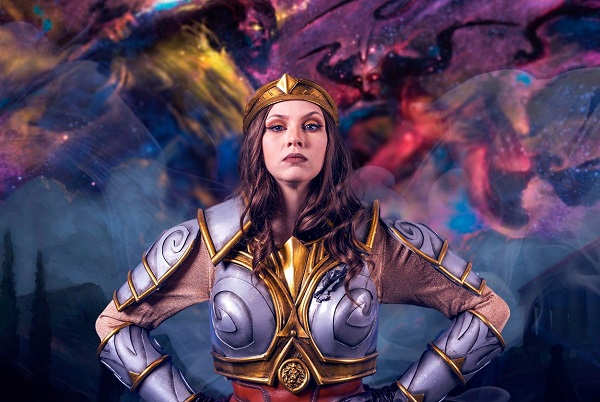