We are inside the lair of behemoths! I REPEAT, IKORIA HAS ARRIVED! Well... online, at least. This set is looking to change Magic forever. Ikoria brings with it companions, a mechanic we have never seen before that is sure to change Magic as when we were first introduced to Planeswalkers. The bulk of the set's cards are multicolored so we are going to be jamming colors together since they have less playable cards than the multicolored cards, and today we'll be covering Blue and White.

Check out the Other Parts:

I will not be going over cards that I believe will not see play in Standard and I will not be going over the Commander cards that will not see Standard play. For example, cards like Elspeth, Undaunted Hero (Planeswalker duel deck rare) and Archon of Falling Stars will be omitted since they are just Limited/Commander cards and saying, "This is just a Limited card" repeatedly gets old rather fast. Don't worry though, I will be covering all the rare and mythic cards in the actual Ikoria: Lair of Behemoths set. So, if you like a certain rare or mythic, it will be mentioned in the review.

4 - Format staples. Sees play in multiple decks, one of the best cards in the format. (Hydroid Krasis, Narset of the Ancient Way, Witch's Oven)

5 - Format warping. If you're in these colors, you play that card. (Teferi, Time Raveler, Nissa, Who Shakes the World)

1.5 - This card is just too slow and the metagame is nowhere near a spot where Cubwarden is playable main deck. Only spot I can see where it might see play is in the sideboard of a creature deck against Mono-Red. Even then, it is not enough life to stop Embercleave.

2 - Magistrate is a decent Sideboard option against Companion decks and/or Cat Oven decks. Being a 1/3 really hurts his playability main deck though.

2 - Decent 1-drop in a cycling deck. Could see this small fox growing exceptionally large very quickly since a bunch of cycle cards only cast 1 mana to cycle.

2.5 - 1-drops that die and make tokens have been great in sacrifice decks, but this is overall way worse than Hunted Witness but if you want more of this effect then you can jam this little kitty!

2 - Sideboard card for decks like Obosh or decks that have a ton of even or odd converted mana cost in their decks. Cat oven randomly just has a lot of odd CMC in their decks.

2 - I like this in Feather decks or in the sideboard of White decks. Great answer to Fires of Invention and you can re-buy it with Feather after growing her.

3.5 - Best Mono-White card in the set. Just a better Nightmare Shepherd for White decks. Also great in Gyruda decks allowing you to chain Gyruda since it is legendary.

2.5 - Mardu is just not in a good spot. We do not really have creature or token decks. The meta game needs to change drastically for this card be playable. There once was a time where Tragic Arrogance was playable but those times are long gone.

2 - Grow your little Flourishing Fox and make 1/1 humans as you cycle ALL the cards!

Sadly, again, White did not get very good cards here. Luminous Broodmoth is easily the best card and after that is a pump spell that I believe will be good in Feather decks. Hopefully the Jeskai cards will be good for White when we get to the multicolored section.

Onto the Blue cards

2.5 - Super cheap Cycling allows this to be playable in control / Cycling decks or, more importantly, Unpredictable Cyclone! This allows you to hit another Boon of the Wish-Giver when you cycle this with Unpredictable Cyclone or hit whatever Ultimatum you decide to play!

2 - I wish they just have us Astral Slide. Having to pay mana every time you cycle hurts, however a lot of cards do cycle for only 1 mana so this could be a fringe deck

3 - Staple in every Standard format it is legal in. Just a solid counterspell.

2 - 2 mana for this ability is powerful. Being sorcery speed hurts this spell but does not make it unplayable in a

2 - Decent Sideboard card for Blue decks. A decent way to stop Mutate decks and fine answer against Questing Beast. Would be a lot more playable if it had cycling.

2.5 - One of the best clones of I have ever seen for 4 mana. It copies anything! Even lands if you want to ramp a little bit. Super fun card.

3 - I think this is better than Sinister Sabotage. Sometimes you draw your counterspell after your opponents have resolved their threats and it's nice that you can just cycle this in that scenario.

2 - I would rate this higher, but Narset and Teferi hose this card badly. I still like it as an option for cycling decks, but I don't have high hopes for it. 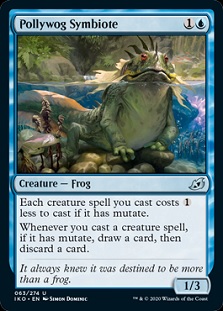 2 - I have not seen a good Standard mutate deck yet, but Pollywog seems to be a great fit in that deck if it ever pops up.

4 - One of the best cards in the set. Curious Obsession with flash and can just be a creature if you do not have a creature out already. Really pushes the flash decks.

4 - Decree of Justice was particularly good in old Standard and Shark Typhoon will be great too. It allows you to kill Teferi, Time Raveler at instant speed via cycling it and making a shark, kill a creature in combat at instant speed, and it gets around countermagic when you cycle it. Sweet and powerful card!

2.5 - Seems okay in a flash deck but I think those decks have much better flash options in Frilled Mystic, Nightpack Ambusher, or whatever else you can dig up.

Blue picked up arguably one of the best cards in the set in Sea-Dasher Octopus. This assuredly put flash decks back on the map. Shark Typhoon is a funny card, but it is also an extremely powerful and versatile card. I expect many Blue decks to play it. It is equal in power level in Sea-Dasher Octopus in my mind. It's power level just is not as obvious.

That is it for today, tomorrow we'll be going over the Black and Red, don't miss it!