We covered Black and Multicolored yesterday, so today we will be on the Red, artifacts, and the one colorless non-artifact card in the set, Ugin, the Spirit Dragon. Before we dive in, let us go over my grading scale!

Now that we have that out of the way, let us begin!

Bolt Hound - 3 - Bolt Hound is a fine aggressive creature, I expect it to see play in plenty of aggressive decks.

Brash Taunter - 2.5 - Stuffy Doll is now Red! This will be a fun card to play and good in draft but not particularly good in Constructed.

Chandra, Heart of Fire - 3 - I like this card, but it is geared more toward a big

deck. The fact that bother abilities plus is excellent, it will help her protect herself and get to her Ultimate quicker.

Chandra's Incinerator - 2 - Cool card but why play this when you can just kill them with Embercleave. Embercleave asks that you play creatures, so it conflicts with Incinerator and Cleave is just the better card.

Chandra's Pyreling - 3 - Looks like Cavalcade got a new toy! Card seems like an excellent addition in that deck.

Conspicuous Snoop - 2-4 - Hear me out. I give this a high rating because it is an amazing card! 2 mana Future Sight on a creature?! This card will either see no play or be in one of the best decks in Standard, it all depends on if we get more good goblins or not in Standard.

Double Vision - 2 - Love this, but Teferi, Time Raveler is a card! I will brew some decks with it but I do not think it will be in any tier one decks.

Fiery Emancipation - 2 - Nyxbloom Ancient got cooked into this card. This card could see play in Wilderness Reclamation decks, but you are just better off casting Explosion instead of this card.

Gadrak, the Crown-Scourge - 2.5 - Slow by itself but this could see play in an aggressive Red/artifact deck alongside things like Gingerbrute, Steel Overseer, and friends.

Sanctum of Shattered Heights - 2 - Love these new shrines. Love that it hits both creatures and planeswalkers. I really hope the shrine deck is playable in three months when Teferi rotates. I do not think it will be particularly good until then.

Subira, Tulzidi Caravanner - 3 - Subira seems like a fantastic card as a one-of or two-of main deck to push creatures through and/or draw some extra cards. I am no Red mage, but it also seems like fine Sideboard card as well.

Terror of the Peaks - 3.5 - I really like this creature; I like that it has built in protection if your opponent tries to remove it with targeted spell removal. It is also amazing at killing your opponent's battlefield if you untap with it or bring it back with Command the Dreadhorde. It can also just kill the opponent!

Transmogrify - 2.5 - We do not really have anything to Polymorph into and even if we did, I like Lukka a bit more since he is not completely dead if you have no targets for it.

deck alongside Rotting Regisaur or in a

Chromatic Orrery - 2.5 - SUPER CHROMATIC LANTERN! I love this card, completely fixes your mana and ramps you hard. When you play it, you only lose out on 2 mana! This not coming into play tapped is also huge. Love it and plan to build decks with it, I like this more than Nyxbloom Ancient. 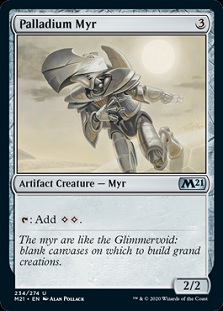 Palladium Myr - 3 - Big ramp for 3 mana! Excellent at casting Ugin and surviving an Ugin minus. 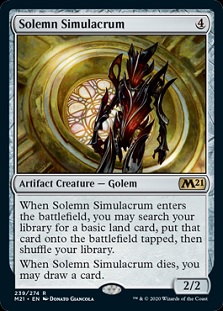 Solemn Simulacrum - 3.5 - Solemn Simulacrum is just a great card that can slide into almost any non-aggressive deck. The best deck for Solemn are going to be ones that can trigger the die ability on its own. Village Rites or Witch's Oven? 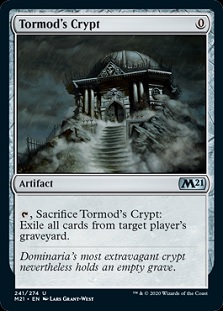 Tormod's Crypt - 2 - Fine Sideboard card for graveyard decks, nothing fancy but it does not need to be. 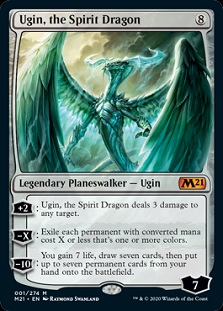 Ugin, the Spirit Dragon - 5 - Ugin is going to be a card that you will have to keep in mind when building your decks, you do not want it to be able to wipe your entire battlefield, especially if you ca not kill it afterwards. Last time Ugin was in Standard we went to an artifact set; I suspect we will be going to New Phyrexia next year.

If you are tired of Ugin, he is just starting. I am personally a fan of Ugin and look forward to building decks with him. Core Set 2021 is shaping to be a very solid set, I really like it. These past core sets have been amazing!

That is it for today! Tomorrow we will be going over the Green and lands cards, make sure to tune in!