Last day for the set review and today we will go over my favorite color Green and the Land cards! Core Set 2021 has been shaping up to be one of my favorite core sets of all time! Let us go over the card but before we do, this is how I will be breaking the cards down.

Now that we have that out of the way, let us begin!

Azusa, Lost but Seeking - 2.5 - Azusa is a powerful card but you really need a land payoff or big spell to make it work. We don't have Field of the Dead but we do have Ugin, the Spirit Dragon and Nissa's Triumph, Nylea's Intervention, Radha, Crucible of Worlds, and Experimental Frenzy to really try and abuse her ability to play extra lands. 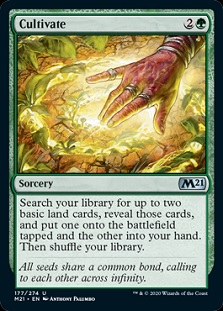 Cultivate - 3.5 - Woot! Cultivate is back, Kodama's Reach has never looked better. Very solid card that ramps and insures you hit your land drop this turn or a future turn. You can also turn that land you get with Cultivate into something else with things like Teferi, Master of Time.

Drowsing Tyrannodon - 2 - I can see this card coming out of the Sideboard for aggressive decks, not fancy but solid in that spot.

Elder Gargaroth - 2.5 - Just not a playable card against the tier one decks of the format and that is wild. Getting it bounced by Teferi or Borrower is miserable, even worse that it plays into Elspeth Conquers Death.

Feline Sovereign - 2 - Maybe we get more cats as this is a powerful cat lord, now we just do not have enough kitties! 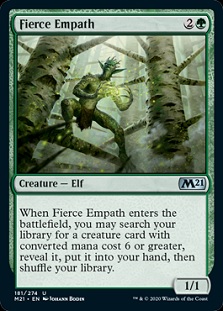 Fierce Empath - 2 - Thankfully, Agent of Treachery is banned, get Ghalta in Historic though and Yidaro in Standard which cycles!

Garruk, Unleashed - 3 - Garruk, Unleashed reminds me a lot of Elspeth, Knight Errant. An exceptionally good card but not an overpowered one. Especially since it dodges Eliminate. The plus ability is what Green creature decks really want. I expect this to see play in stompy decks though it does compete with Vivian, Arkbow Ranger. Unlike Vivian, Garruk can make bodies and I that is important.

Garruk's Harbinger - 2 - I like this from the Sideboard for Black decks. If Black was the only color with the most removal spells then I could see this main deck, but we have Teferi, Scorching Dragonfire, Claim the Firstborn, Deafening Clarion, etc.

Garruk's Uprising - 3 - This card just keeps getting better and better. I guess Wizards is determined to make one work, and honestly, I think this one is it. We just need traditional midrange decks to be good again and I think we will get that when War of the Spark rotates. 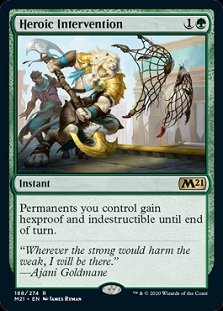 Heroic Intervention - 2 - No Veil of Summer that is for sure. This card is fine but only really playable in the sideboard and even then, I'm not sure it is better than something like Nightpack Ambusher or a planeswalker if you are trying to combat battlefield wipes like Shatter the Sky.

Jolrael, Mwonvuli Recluse - 3.5 - I love this card and it fits very well in Bant Midrange right now. You have so many cards that cantrip in Growth Spiral, two Teferis, and Hydroid Krasis. Not that hard to trigger Jolrael in that deck. Jolrael not only makes an army quickly, she also threatens to kill your opponent with her activated ability. 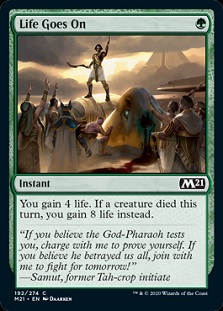 Life Goes On - 2 - Sweet card against decks like Mono-Red or other aggressive decks where you want just a couple more turns with your Gruul or Green midrange deck to close the game out.

Llanowar Visionary - 3.5 - This card is being underrated, Cultivate and Risen Reef are great and so is this card. It will just take some time for it to catch on. Works well with Jolrael, Mwonvuli Recluse as well!

Primal Might - 2.5 - Maybe Prey Upon is finally playable, but isn't Voracious Hydra simply better? I think it is. 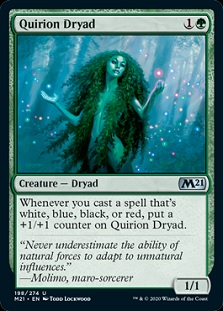 Quirion Dryad - 2 -The people that love this card are just nostalgic for the deck miracle grow from the old days! The better tempo deck is just Simic Flash or even Dimir Flash. 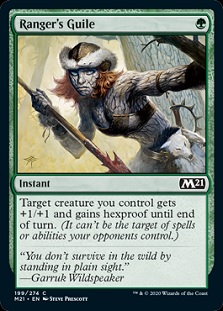 Ranger's Guile - 3 - If Dive Down was playable, so is Ranger's Guile. Great at protecting important cheap creatures!

Sanctum of Fruitful Harvest - 2 - I loved Frontier Siege and this one is not as powerful, but it can be, you just need more shrines! Seriously hope Sanctum of All is playable after Narset and Teferi rotate, such a sweet and fun card!

Scavenging Ooze - 4 - People are playing Scavenging Ooze in their Sideboard when they should be playing it main deck, especially because every top tier deck is either playing Uro or Cauldron Familiar. A solid reprint that I am extremely glad is back in Standard.

Sporeweb Weaver - 2 - A solid card for the Sideboard alongside Shifting Ceratops against Flash decks. Flash decks look to gain a lot when Teferi, Time Raveler rotates. Hopefully, this itsy-bitsy spider can do some work against that deck.

Animal Sanctuary - 2 - Sweet land for commander decks for now. Swarmyard is a unique land that people did not play in Constructed events but is worth $20 now. Animal Sanctuary will most likely be the same way in time.

Radiant Fountain - 3 - Field of the Dead decks would absolutely play this if they were still legal. Even though it is not, two color control decks still can and will if aggressive decks are prevalent. They are not right now, but metas change and rotation is only three months away!

The Temple lands are solid, we also know they will see ton of play. I did not want to have them take a spot in the top five since we know about them. Green looks like it got a lot of great cards, I would honestly say it did the best in this set. Especially since Ugin, the Spirit Dragon is basically a Green card since it works best in ramp decks. Overall, Core Set 2021 looks to be an amazing set. Outside of Ugin, nothing seems to be format warping and we can deal with Ugin by hopefully going under him. Excited to see what Core Set 2021 does, especially after rotation!

That is it for today! Enjoy Core Set 2021 and make sure to use code Ali5 if you shop at Coolstuffinc to get 5% off your entire order!