If you havenât ever made a 3D Magic card, now is a great time to start! Magic 2012 is upon us, and with it are a bunch of new commons that would make great first cards to make 3D alters of. Here are just a few of the new cards that have layers that are fairly easy to figure out: 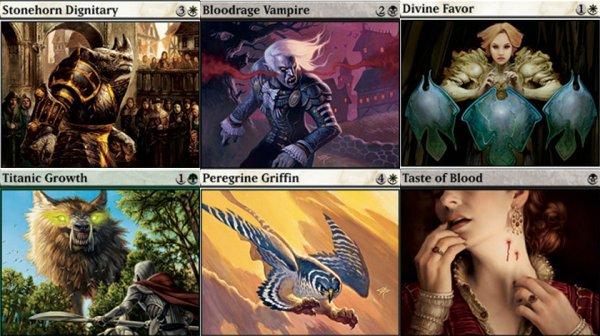 Of course, if youâre going to spend time or money improving the look of any of your cards, it makes a lot of sense to do so with cards that will actually see a decent amount of play. Thereâs a reason artists donât get many requests for altered Chrome Steeds even though the few that exist are amazing.

To give their 3D cards more play, some people make their cards into life counters, either with built-in spin dials or with an abacus in the text box. 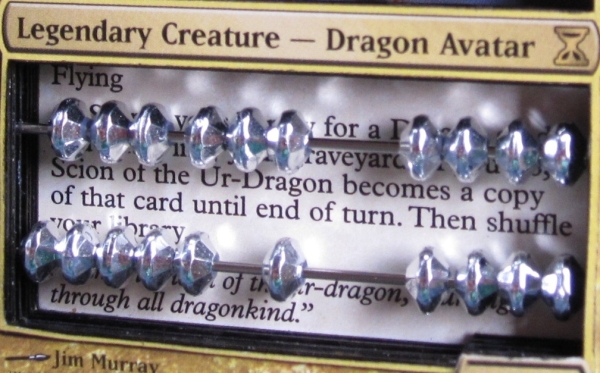 If youâre going to alter a Legendary creature, itâs good to choose Commanders who are the centerpiece of the deck. Guys who are âonly there for the colorsâ often spend the entire game sitting on the sidelines; why bother 3D-ing or painting on such a card? Commanders like Captain Sisay and Jhoira of the Ghitu are ideal choices for alteration. 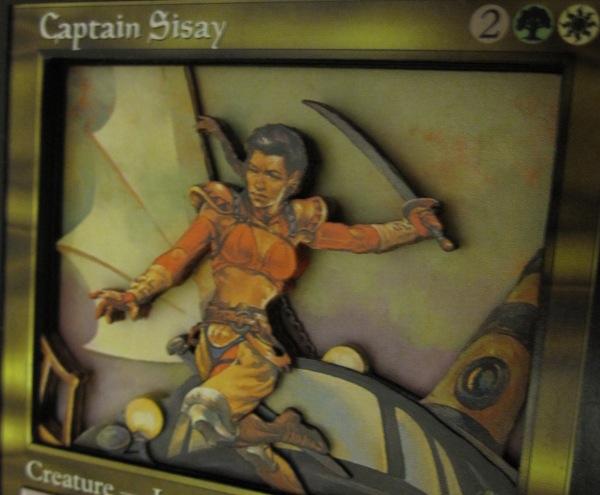 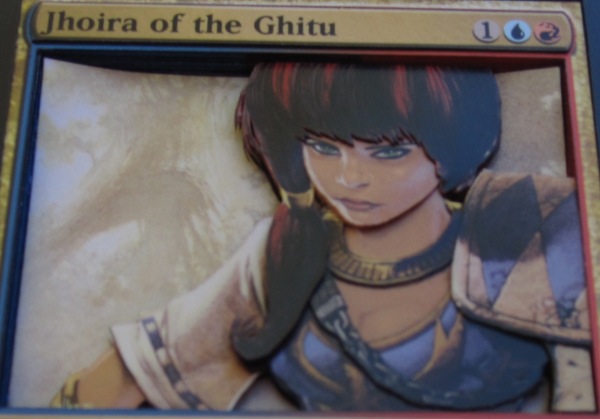 Thatâs why Iâm excited about working on Grand Arbiter Augustin IV today. While itâs not the type of deck I enjoy playing, I hope someone will use him to lead a Commander deck. There was actually a point during the polling last time where Ramirez DePietro was just barely behind Augustin. As much as Iâd like to make the 3D pirate, he definitely doesnât share the centerpiece status that the Grand Arbiter has.

First, I remove the far background: 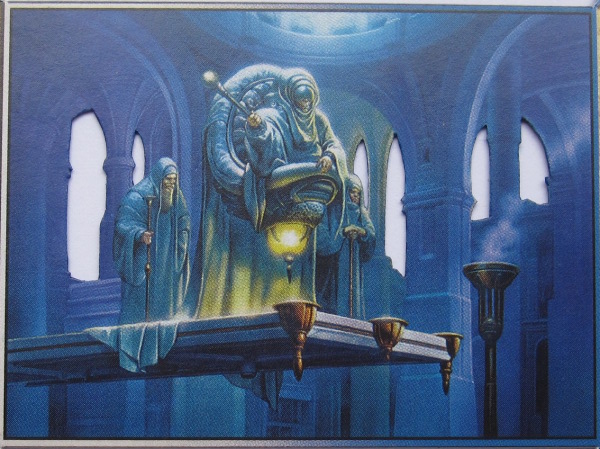 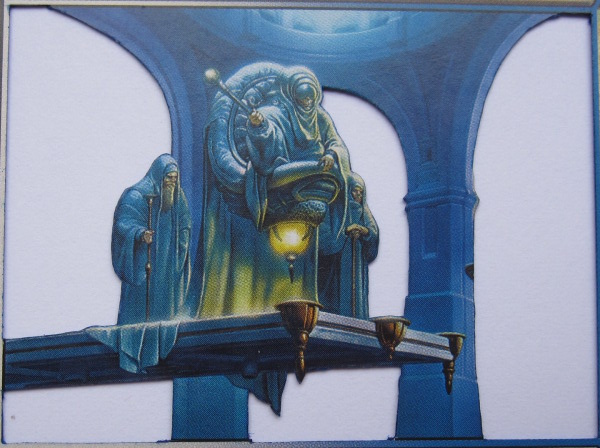 If the setting depicted in the cardâs art were real, there would be much more actual depth between the pillars and less actual depth of Grand Arbiter Augustin IV and his attendants. However, it will look much better if I put the emphasis on the foreground elements of the art, so Iâll make those parts more detailed and give them more than their share of depth. 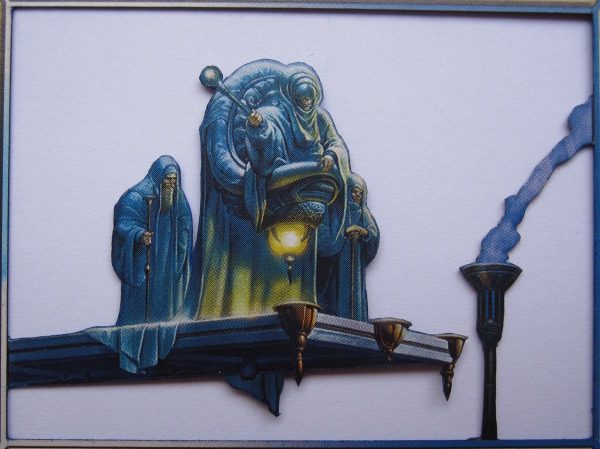 The first layer of the foreground is the attendants, the torch, and the part of Augustinâs robe that hangs off the back of the ledge.

Next, I remove everything but the Arbiter and the ledge: 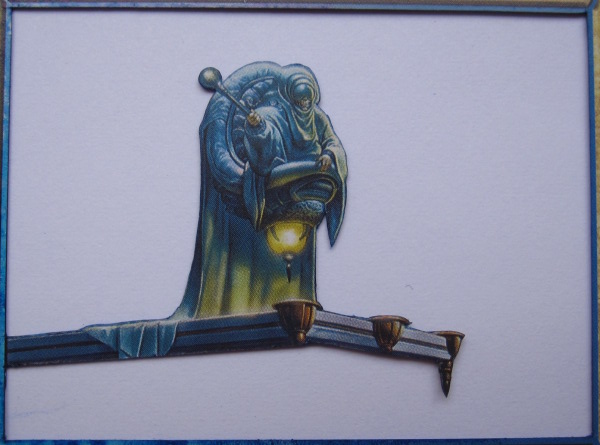 While I initially leave the entire ledge in this layer, I end up going back and cutting it down to the smaller size shown above. This is because I want to have the underside of the ledge be bent back to make it actually look like itâs the underside. Doing so requires an empty space behind it.

Finally, I cut out the ledge layer. Since the cup on the far side of the ledge is behind this layer, I leave it off: 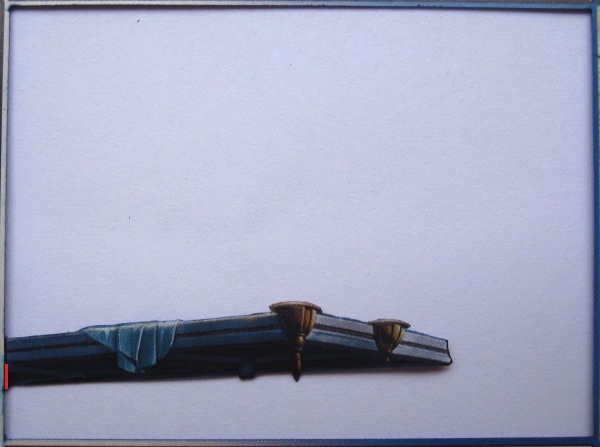 I cut away the underside of the ledge from the cardâs border so that the part Iâve marked with red in that picture is not attached. This makes it possible to bend the underside back. Bending a straight line in a small piece of cardboard is difficult to do. I use a metal ruler to help line up the bend.

When working with expensive cards, itâs always nice to find ways to reduce the number of cards you use. Iâll be using the cut-out portion from the ledge layer to detail the Arbiter himself. The cut-out portion of the previous layer will work nicely as the far background. Since only the sky is visible for the far background, an uncut copy of the card isnât necessary there. I make a background by using a couple of random commons and that scrap: 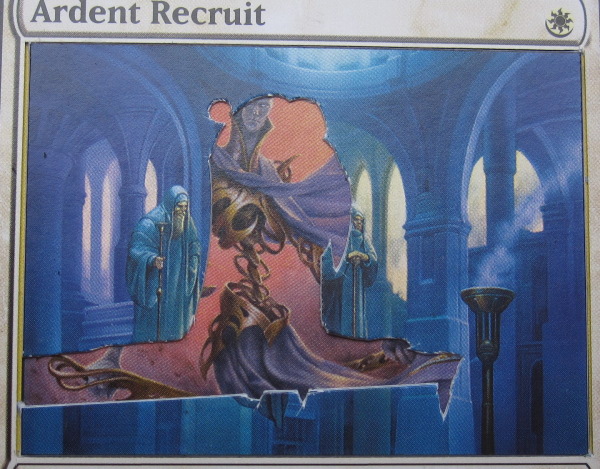 After cutting all of my layers, I start cutting out the pieces Iâll use for detail work. For the pillars, I cut the following set of pieces: 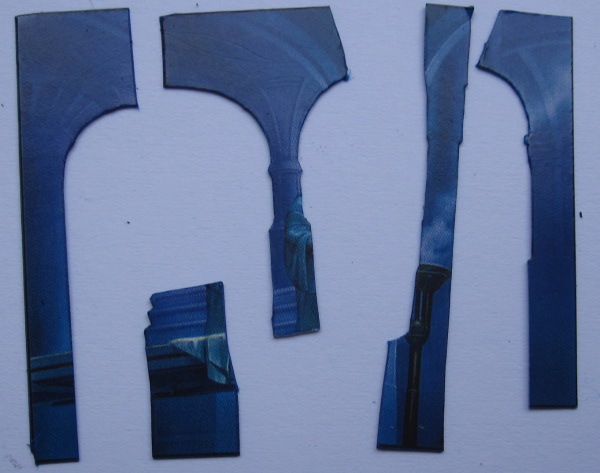 These will all be layered on top of the first card I cut (the one with only the sky removed).

Next, I cut out pieces to detail the front of the ledge and the top of the torch:

The backs of each of these pieces has been shaved off to make them thinner, a technique I first demonstrated on Teferiâs sleeves. 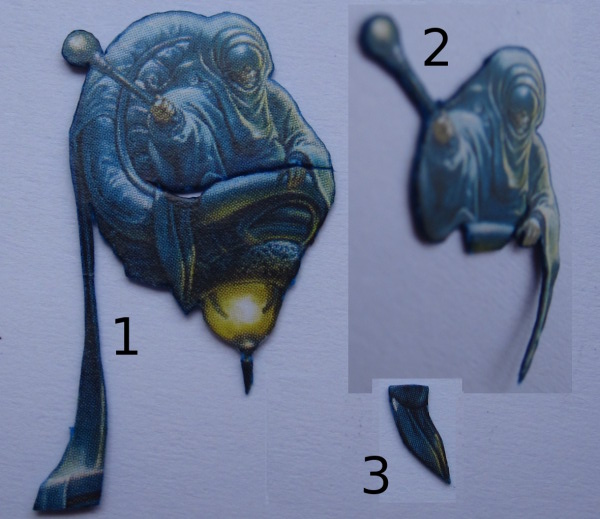 In order for piece #2 to be able to go inside the chair, I cut a line through piece #1. The tab at the bottom of piece #2 goes behind the edge of the chair, while Augustinâs arms go over it. I also cut a hole under Augustinâs right arm in piece #1, because both the right arm in piece #2 and the top of piece #3 will be there. The hole will make it easier for the three pieces to fit together. Assembled, the three pieces become this: 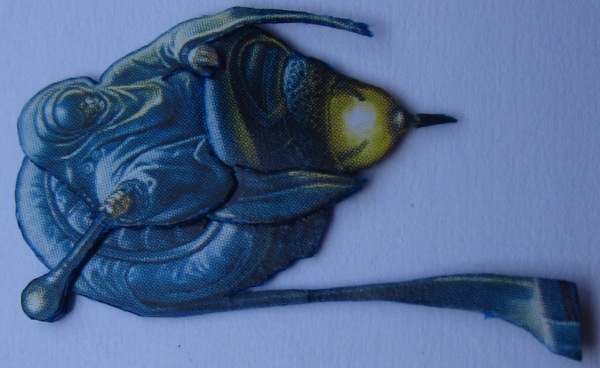 For cards with modern borders, the way I detail the top borders is to lower the text box and raise the info boxes. That requires cutting the following pieces: 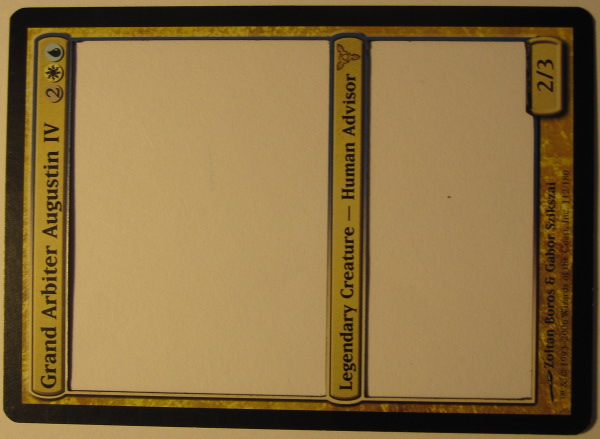 If the layer directly below that border-only layer is a copy of the card Iâm making a 3D version of, perfectâthe text of the card will line up with the removed text box. However, if I have a spacer behind the border-only layer (which I do in this case), I need to also cut out the text box of that spacer and replace it with appropriate text: 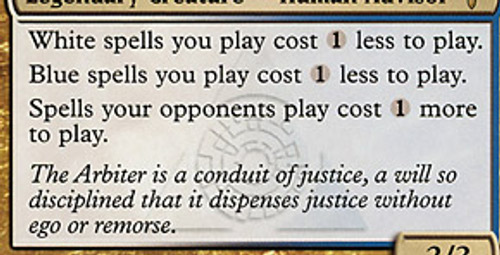 The piece is cut larger than just the text box so that there is some overlap between the two pieces.

As I mentioned in my last article, there are multiple ways I have gone about coloring the inner borders on two-color cards. The only other W/U card Iâve done before is the other Azorius Legend, Isperia the Inscrutable. On the sphinx, I split the coloring of the inner border:

Because the art of Grand Arbiter Augustin IV is so completely blue, I decide that it will look better to have the entire interior border be blue instead of a split like on Isperia. I color it in accordingly and finish assembling the card.

GAAIV: back of his cloak visible

Layers 8 through 10 are bent forward so their elements slant into Layers 12 and 13. 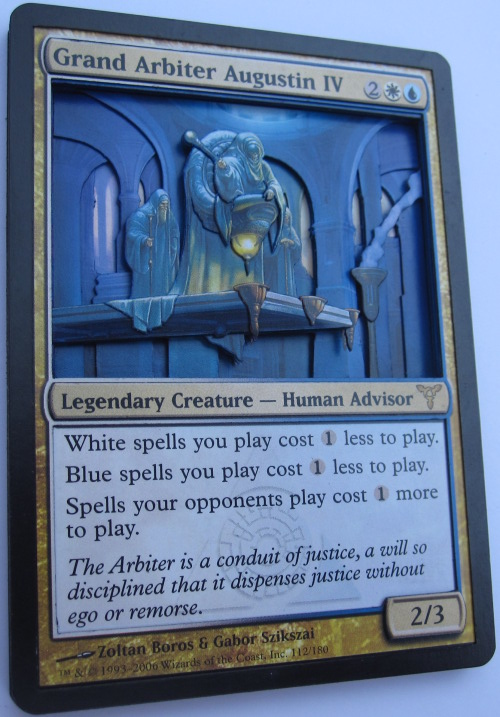 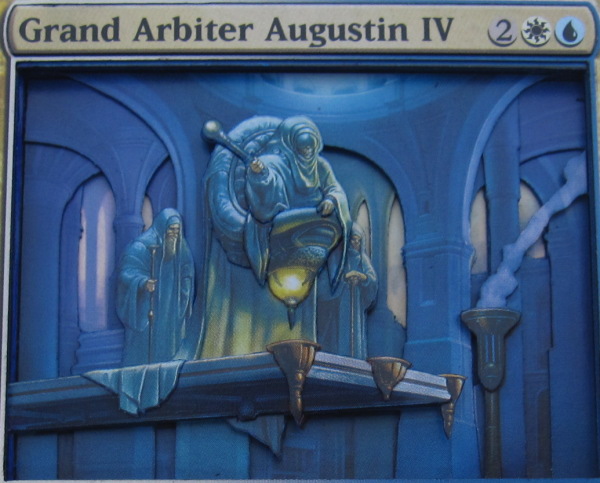 In a couple weeks, Iâll be back with another 3D Legendary creature that Iâve been wanting to work with for a long time. Iâll be at GenCon that week, tooâfind me in the TCG Hall if you want to see some of my 3D cards in person or play some games of Commander!