I've never started an article that way, but it seemed appropriate for this week. After all, this week, I'm saying, âThank you,â to Mike Linnemann, the man who made Vorthos Wednesday what it is today. When I found out that Mike had landed an Art Director job at Fantasy Flight Games and had to stop writing for GatheringMagic, I decided to make him a gift.

What card do you alter for the guy who just became an Art Director? 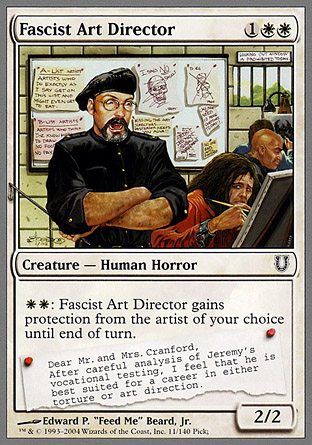 Instead of making a normal 3D alter, I wanted something special. Why not replace the art director's face with Mike's face? For that, I turned to Eric Klug, the same amazing artist I worked with on Mike's extended-art 3D Melira.

Some of the Magicians Klug has put on cards in the past.

I asked Eric to replace the Fascist Art Director's head with Mike's head, but to keep the angry expression. He suggested doing a caricature like in his previous works because the larger sized head would allow for more detail. I agreed, and I shipped him his canvas.

In no time, Klug sent me a picture of the completed painting: 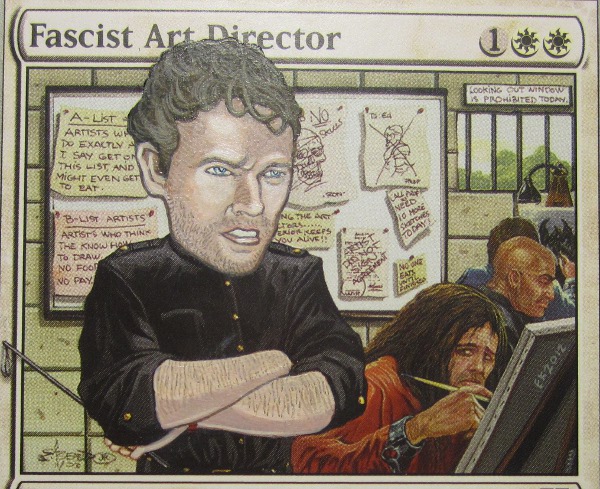 Because Mike lives in the frozen wastes of Minnesota, he isn't as tanned as the original Fascist Art Director, so Klug ended up painting the arms to match the new face. For 3D purposes, I needed two matching arms since I planned to fold them over and under each other. Luckily I had sent Klug two copies of the card, so he made me a matching arm on the second copy. 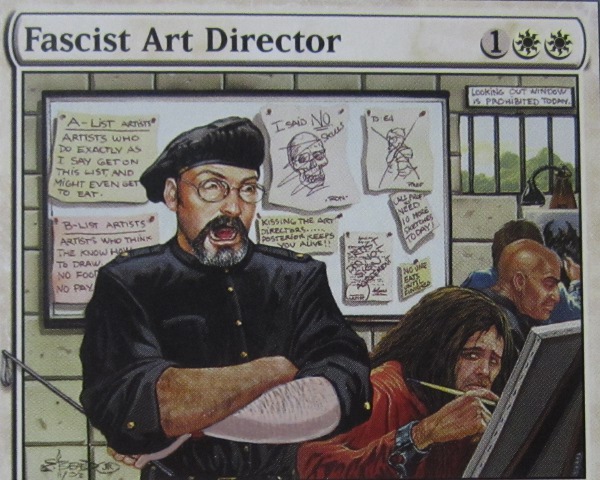 While I waited for the painted cards to arrive, I started on the background. I chose to begin with the bulletin board, cutting pieces for the board and each of its postings:

I didn't want the postings to stick up off the bulletin board very much, so I shaved off the backs before assembling this: 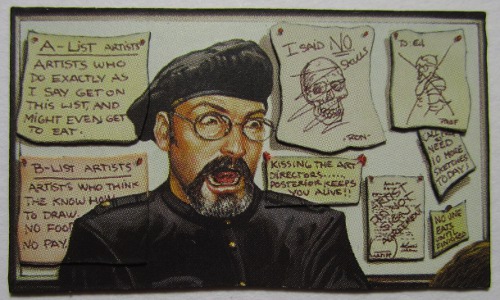 Next, I cut a layer on which to hang the bulletin board by removing everything outside the window: 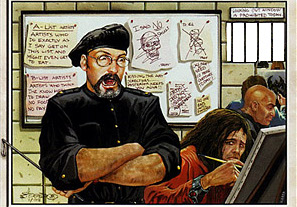 With that base layer created, I moved on to some of the details that would be attached to it.

On the piece that makes up the canvas and lamp, I cut the lamp head away from the top of the canvas and bent it forward. I made the piece on the right from scraps of other details, which is why it ended up being such an odd shape; only the trees outside the window are visible in the completed card.

For the sky outside the window, I found a basic land with almost the exact same color of sky in that spot. I snapped this picture after putting a few spacer layers on top of the Plains: 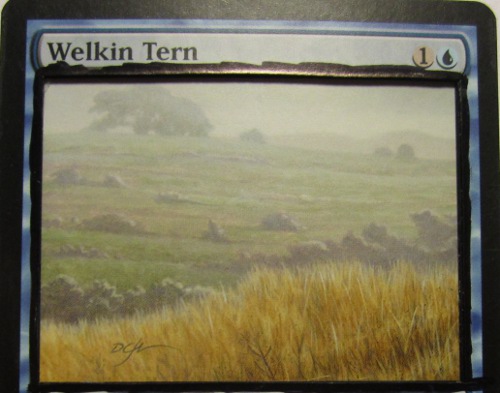 I added more spacers and assembled all of the detail pieces I'd cut so far around the wall layer: 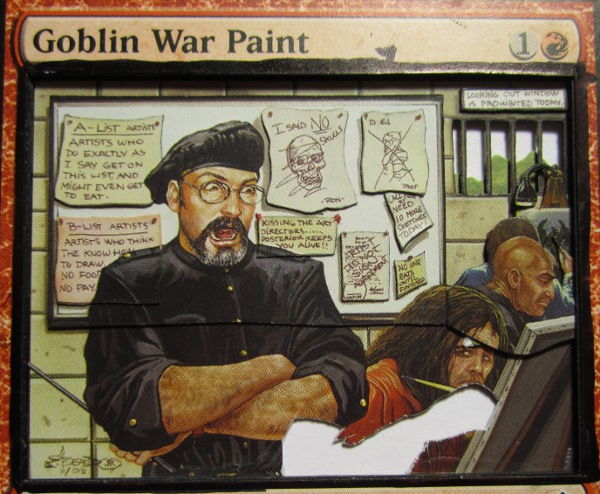 In that picture, you can see that I removed the arm from the artist in red. From other copies of the card, I cut out the artist's hair, shackle, chain, and brush.

I attached those pieces to a basic layer that looked something like this: 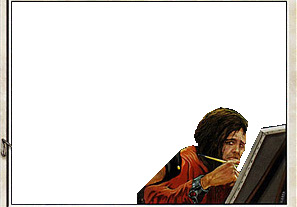 The hair was glued on top of that layer, with parts of it tucking behind the face and shoulder of the artist. The assembled arm went in front of it all. To finish up the group, I cut a detail piece of the middle artist and attached it behind that layer.

Around this time, the painted cards arrived, so I went to work building the actual Fascist Art Director. I started by cutting out the three pieces of his body: 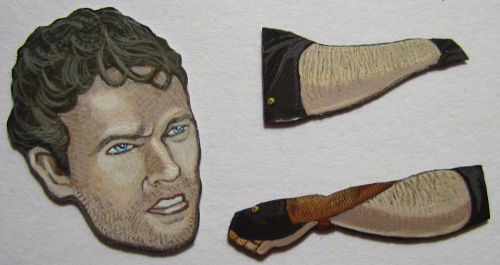 I had asked Eric to sign the back of the canvas of the artist in red because it was one of the few things I could use from the rest of the primary painted alter after cutting out the painted parts. Here's that layer with the detail pieces that made up the easel not yet attached: 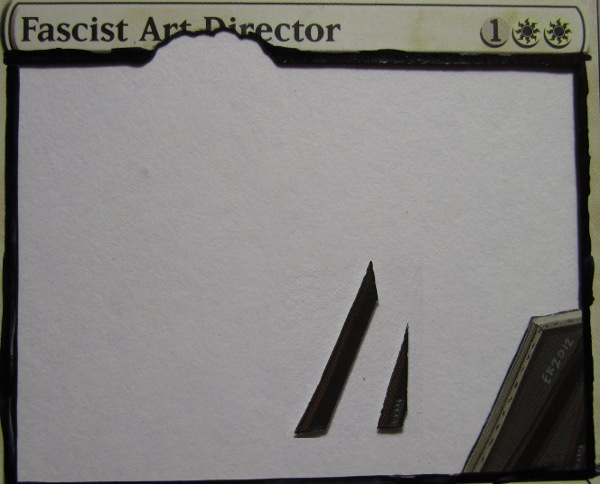 Next, I cut the basic layer to which I planned to attach Mike's face and new arms: 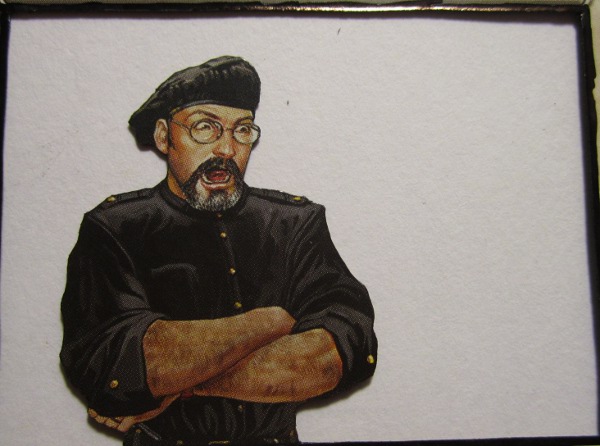 Since the face was going to be covered, I obviously didn't need to cut the head the same shape, but I went for it anyway. After cutting that out, I had to remove parts from the arms so I could make it look like my arm pieces were coming out from under the sleeves and folding over each other.

In the picture of the front, you can somewhat make out the curve I added to Mike's body to make it more three-dimensional. In the rear shot, you can see that I shaved the back off the edges of the sleeves so that the transition between arm and sleeve would be smoother. Getting the arms in place with all the tucking and bending was tricky, but I was happy to see everything worked out, and I ended up with this:

At this point, I turned to details outside the art, cutting a frame layer (a copy of Fascist Art Director with no art box or text box) and copies of the info boxes to be raised up on the frame layer. For the letter to the parents in the text box, I considered writing and printing a letter to Mr. and Mrs. Linnemann about their son Mike, but without a good way to laminate it, I stuck with the original. However, I thought that the pins that hold the note would look weird as normal detail pieces, so I decided to go with actual pinheads:

I used wire cutters to trim the pins down to about half a millimeter each, then stuck them into the note and used glue to secure them in place.

Finally, I cut out the riding crop detail piece and attached it and the face piece to the rest of the card.

Spacers, with the tree detail piece

Spacers, with bulletin board and rear artist

Spacers, with details of forward artist 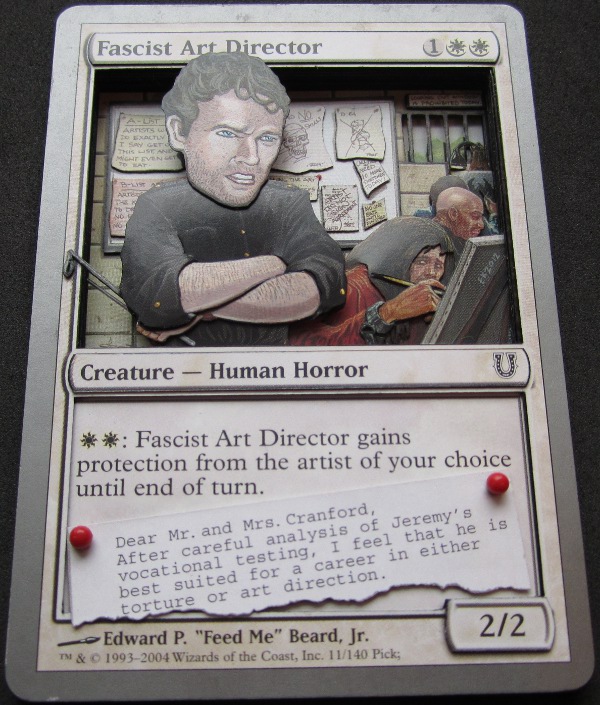 I was very happy with the completed card, but something was missing. If you've read much of Mike's work, you might be aware that the man owns a lot of artâbut not a lot of frames. If I was going to give him a card meant for display, I knew I had to frame it myself.

Luckily, Hobby Lobby was having a frame sale. Every once in a while, they put all of their frames on sale for 50% off; last time they did that, I picked up some great frames for the Unhinged basic land prints. The challenge this time was finding a frame I liked that also had enough space behind the glass to fit the 3D card. 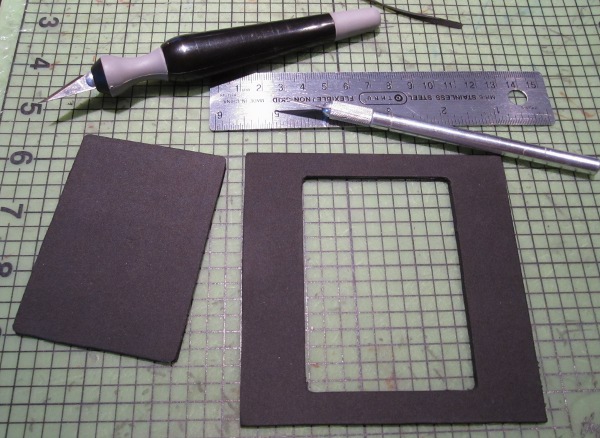 In order to hold the 3D card in place, I cut a piece of foam to fit perfectly in the frame and hold the sides of the card, and then used double-sided tape to secure everything. 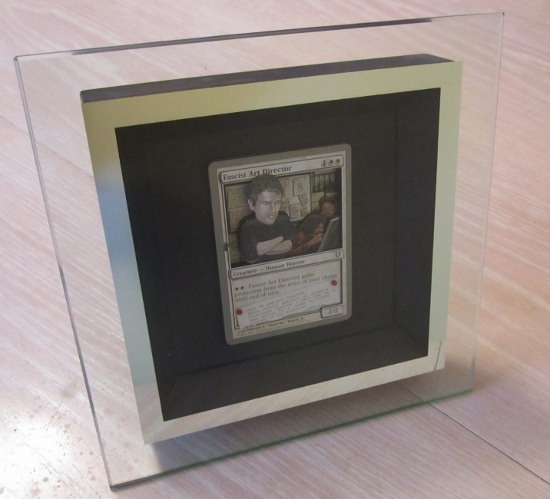 In case you missed the announcement last week, the fifth Altered Reality Challenge has begun. Klug and I will both be judging, along with fellow GatheringMagic alterer Jeremy Froggatt. I know a few 3D alterers are planning to enterâhow about you? You have until Sunday night to enter, so get started!