(Note: This article has been tested and found to be free of COVID-19. You may safely share it with your friends)

Most people I talk to about organizing their cards complain that they just don't have the time. I get this. If you want a complex organization or just have a lot of cards, it can take a lot of time. I suspect most people say that but when it comes down to it, they just find it boring and don't want to do it. However, ignoring it will only make the mess worse. Eventually the cards will spread across your house and invade every part of your life. A clean, organized collection, will limit the spread of disorganized clutter.

Right now you have plenty of time to get that project done! I know plenty of people sort while watching their favorite series. I like to listen to podcasts while organizing cards. You do you. Choose your method to organize and get started. You may want to set smaller goals, organizing chunks of cards or just splitting the final goal into five separate tasks. Whatever you need to do to get through it.

You can also consider culling your collection. Go all Marie Kondo on your collection! This will give you a large box of extra cards to get some store credit, however you choose to rid your home of the chaff you don't want!

I have ten Commander decks, four Brawl decks (don't judge me!), and sixteen 60-card casual decks. When you do suppose was the last time I updated this bad boy?

I would love to see your suggestions for improvement in the comments and on Twitter.

If you are anything like me, this could be a huge boon. I rarely update my decks, so when it does happen, my friends are seriously surprised by the new cards in my deck. It gives me a big advantage when I get the chance to try something new in a deck my opponents think they know inside and out!

Getting a chance to spread a deck out over the table and sort it into the various categories to determine if your deck is fundamentally flawed is a start. Then look at what the deck is trying to do and start looking through the new options available since the last time you updated the deck. If you don't have the cards handy, I like to keep my Coolstuffinc cart handy and just start loading new goodies in there for my next order!

Finding time to build new decks is always a challenge for me. Work can be very time-consuming and my spare time is filled with actually playing Magic with friends! I have as many decks as I do because they rarely get taken apart! This is a golden opportunity for us to put together new decks so our friends aren't tortured with the same decks again and again! As much as I love Buzzbark and Grenzo, I'm sure my friends would love to see some new builds!

Normally when I'm trying to build new decks, I'm online. archedekt.com is my software of choice right now. It is handy to be able to log in while commuting to work and adding cards to my list while sitting at my desk at lunch. However, being at home for an extended period of time means I can get back to old school deck-building! I can peruse my actual cards and put together decks with cards I actually own. I'll get the chance to spread out over the dining room table and build my deck that way! I admit, I'll probably break down in the end and pick up a couple of cards "that are perfect for the deck!" However, shifting cards around on a playmat offers a visceral, old school feel for me that I've missed.

For those of you who have always said that if you just had the time, you would love to try to put together a cosplay, your time has come! No one is looking at you to produce something on the level of Sprankle, Gobert-Hicks, or Tappy Toe Claws, but a robe, some makeup and a little ingenuity can take you a long way. And some prep work with the time you have now would mean that you would be ready for the next Magic Fest in your neck of the woods! 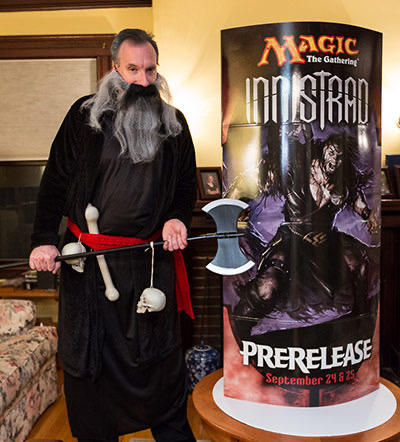 For the young ones out there, this is my attempt at Uncle Istvan. I figured I already had the old, wrinkled, and crazy look, so why not take it all the way! There are plenty of characters in Magic that you can try with just basic skills. My love of Paliano is guiding me toward a Muzzio cosplay that looks like something I might be able to pull off!

While this can amount to goldfishing your deck, I like to take it a step further. Many years ago, I wrote an article about a solitaire format called "Deep IQ." It involves rolling some dice and charts that imitate an opponent. I won't go into detail here, but it was always enjoyable. The best part about Deep IQ is that you can tailor it to your deck's power. The version in the article isn't particularly strong, and this was using decks from 2013! If you are trying your Commander deck against it, you'll want to push the boundaries of Deep IQ even further.

At GenCon, several people will spend days putting together massive structures built of cards. I always marveled at the size of them, and the willingness of people to sit there for hours and do it, particularly while GenCon was going on around them, but hey, different strokes for different folks. However, if we have all this time at home, this might not be so bad. I would love to see pictures of your ever-expanding house of cards

I called this one "build a life counter" but it doesn't have to be that specifically. Paint a deck box. Build a deck box. Order a blank playmat and make it what you want. Alter a card.

The options can be as big or as small as you want. My talented friend James Arnold made me this Monarch token. My talent in this space is small and reduced to doodling on some old card boxes, but many of you out there are creative and this is a chance to let that creativity shine through! I would love to see a lot more of these original bits of swag in our community!

This is two-fold. First off, this is a chance to get through your backlog of Magic content. I am two episodes back on Commander's Brew. I haven't seen the latest offering from One More Mana. There are at least two EDHRECast podcasts I haven't listened to yet. Between YouTube creators, podcasts, and unread articles, I have whole days of material to enjoy! While my regular life limits how much time I have for these, that time has opened right up! Getting a chance to get caught up is great, and also dramatically increases article and deck ideas! And this doesn't even include the the fiction! 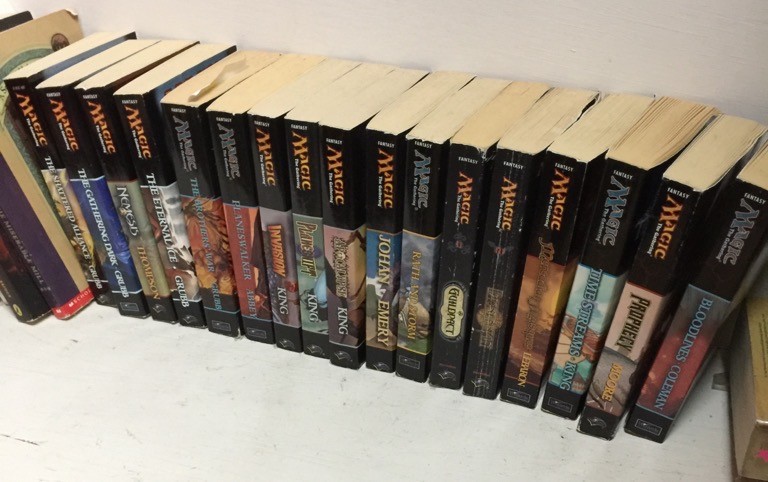 This is also a chance to consume content you haven't listened to before. Commander's Quarters is supposed to be great content, but I haven't found the time to watch. I'll be looking forward to checking it, and others out soon!

Whether it is an article, podcast, or YouTube, this might just be the time you need to get things started. Everyone knows that the first time you do something is the one that takes the most work to complete. You don't know exactly the best way to go about it and everything is a struggle, but if you have an idea, make it work!

If you have ever thought that you could do it better, this is your chance! You'll find that most content creators are thrilled to help someone get started, so don't hesitate to reach out and ask. Your first effort will likely be less than you hoped for, but you did it and the next attempt will only be better! I look forward to seeing yours in the near future! 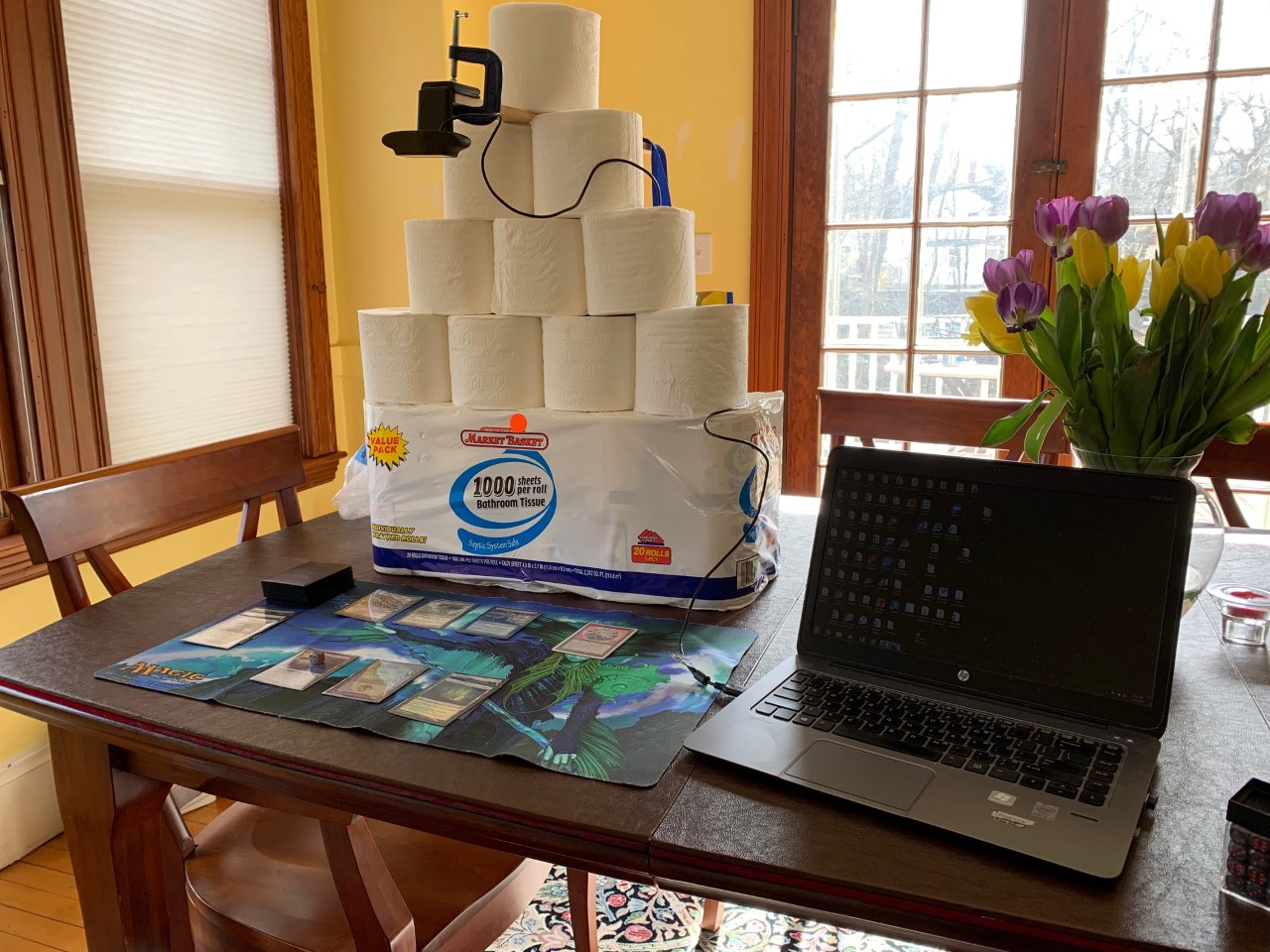 Oh, did you think this would be something else?

This can take a little bit of work, but is well worth the effort. The key is to make sure the camera is set at the appropriate height to allow your friend to see your entire playmat. This can be a little tricky, but I've found that my stockpiled toilet paper makes a great makeshift tripod.

The next part is to remember not to lean too far forward with your hand of cards. I've played plenty of games where I revealed my entire hand to my opponent. When my friends have done that, I give them a warning and we just keep going. The best option is to just put the cards to the side, outside of the view of the camera. Remember, the only reason you were holding them up in the first place is to stop your opponent sitting across from you from seeing your cards.

Now if you are devious, you can opt to cheat since your opponents can see all the extra cards you could have piled up, but that was only really funny that one time and my friend didn't find it nearly as funny as I did.

I hope you found some fun ideas to pass the time. I look forward to playing with you in person some time soon!