As a tournament organizer (TO) and someone who regularly attends prereleases, I see a lot of players who are missing some of the fun a prerelease can offer just because they arenât prepared. Consider this your cheat sheet to prerelease success. For those of you who already know all this, share your knowledge in the comments including the things I have invariably missed.

I know this sounds a little stupid, but preregistered players are a TOâs dream. Preregistration gives us a good estimate of how many people will be attending so we can prepare accordingly. There are some TOs who give discounted rates to players who register early. Early registration makes for a better prerelease.

If you need a selfish reason to register, ask yourself if you have a guild preference. Almost everyone prefers some color combination over another. Registering early gives you a much better chance of receiving the guild pack that you want as opposed to whatever the TO has left. This set is in very high demand. It is likely that your TO will run out of one guild or another. Do you want to be stuck with Rakdos when you are Azorius to the core? Sign up early. If you havenât already signed up, do it now. Stop reading and go sign up. Then come right back.

There is a lot in this step, so weâll break it down into baby steps.

Baby Step 1: What to Bring

Letâs start with your backpack. You will want something to hold your cards in other than your hands. I know it seems obvious, but at every tournament, you see a handful of people walking around with a stack of cards in either hand. You have too many things to bring that you can just hold it all in your hands. Bring your backpack.

Most of us are amazed that this still needs to be mentioned, but here it goes.

There are many teenaged and college-aged men attending prereleases. Pack many of these people into smaller, poorly ventilated rooms with questionable air conditioning, and you are likely to have issues. If many of those people decide to exercise poor hygiene, it only exacerbates the issue.

Try to get a meal in you before you go. If you are already starving and you are only in the deck-building stage, you are in for a long day. This is the time to start hydrating! Drink plenty of fluids with your meal. Too many games stores are in dry, dusty basements. Hydration will be important as your prerelease goes on.

The new cards will have some strange new abilities that you will easily understand reading the FAQ, but when you go in blind and are staring at the card, hopelessly lost, youâll wish you had checked it out first. You may think you understand Nivmagus Elemental, but the FAQ will help you along.

Baby Step 5: Know How the Store Does Things

Every store runs its tournaments a little differently. Everything from match slips to handing out product is just a little different. If you are new, arrive there a little early and get the lowdown. While most stores will explain it clearly at the start, some stores are used to just seeing their regulars and forget that what they are doing is a little different than what others might expect.

When you are permitted to begin deck-building, what I usually do is rip open all the packs, then go through the cards and sort them by color. I generally have five stacks across, one for each color, with a separate stack for lands, artifacts, or the odd gold card. With Return to Ravnica, that just isnât going to work. With so many gold cards, simply piling them all into one stack is not helpful at all. Instead, I recommend a more circular pattern: 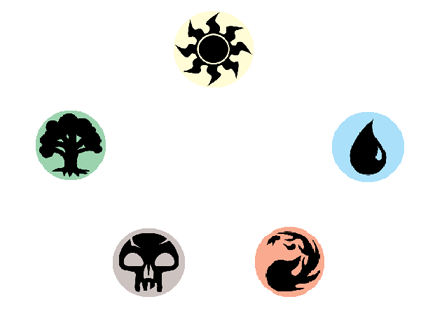 Some of you will notice that this looks a little like the pattern on the back of a Magic card. Iâve made a small shift, swapping the red and black. Doing this means that each color is sitting adjacent to the two other colors it is paired with in Return to Ravnica. As you sort your cards, you can put the colors in their appropriate spots and put the gold cards between them to keep everything orderly. Any lands and artifacts that you open can be piled into the middle. 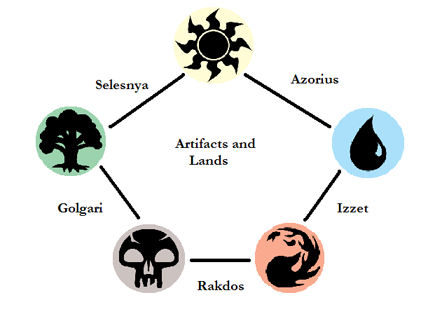 Once youâve completed this, start going through the cards and eliminating the cards that you know you arenât going to play. Which cards will never make the cut? The easiest way to determine this is to consider a few simple rules. These are rules Iâve known for a while, but I no longer remember where I heard them. My apologies to the originators.

17/6/17 refers to creatures/spells/lands. Your deck should have these numbers for the respective types. The idea here is that Sealed Deck games are won or lost with creatures. Building a deck that has too few creatures is the kiss of death in a format where you have only six packsâ worth of cards to choose from. Almost every deck will be a creature deck because in Sealed, creature decks rule. Having seventeen creatures gives you depth and guarantees youâll be putting on pressure or having something to do every turn.

Seventeen lands often sounds like a lot to a newer player, but trust me: It is correct. The format tends to encourage a few high-casting-cost cards since you donât have much else. Often, youâll find yourself splashing a third color, so you need a heavy mana base. In this format, seventeen is generally where you want to be.

Six other spells doesnât sound like a lot, but when you read my next limitation, six wonât sound so bad. The six remaining slots should only be used by spells that have an effect on combat or are removal spells. Collective Blessing and Abrupt Decay are two great cards. Guild Feud and Havoc Festival are garbage. The Blessings does good things in combat, while the Decay is excellent removal. Guild Feud and Havoc Festival do interesting things, but they are not reliable removal, and they donât make your creatures bigger or your opponentâs creatures smaller. Save them for your cool Commander decks where you can really abuse them.

Once you become comfortable with this rule, youâll start to bend it. Your creature count will go down or youâll run more lands. For now, though, 17-6-17 is the way to go.

There is no maximum deck size at the prerelease, so you are going to see people running fifty cards in their decks. Perhaps that was you at the last prerelease. Stop it; you are only hurting yourself! I know you had an amazing pool and just couldnât cut anything because it was all too good.

Picture that fifty-card deck in your head. Eliminate all the lands you played in your fifty-card deck. List the cards from best to worst. Now take the top twenty-three cards you had remaining, and add in the correct ratio of lands. I guarantee that this deck is better than the fifty-card deck you were running. You just increased the odds of drawing your best cards by reducing the size of your deck. Running anything more than forty is a mistake. I know there are some people who believe that running forty-one is okay in certain circumstances. Until you have a complete understanding of deck building, ignore those people! Decks with more than forty cards that are as good as forty-card decks are very special decks that involve unusual deck-building. For now, stay with forty.

Return to Ravnica is probably going to make following this rule easy. You will probably end up in the colors of the guild you picked for your guild pack since youâll have sixteen cards that will all be encouraging you into that color pair. Staying in two colors makes your mana base so much easier to determine, and it makes it much more likely that you will be able to cast your spells without having to wait for the correct color of mana to show itself.

In spite of all this, you are going to open a Loxodon Smiter that doesnât fit into your Azorius deck. Adding that third color is dangerous, but if the cards are good enough in that color to add it to your deck, go for it. Just a couple of caveats, though. Donât be reliant on playing that third color in the first three turns. Too often, it just wonât happen, and the card wonât be as good as you thought it would be. Splash cards are best as higher-casting-cost cards that wonât show up until you have the mana needed. Finally, if you need double the mana or more, donât splash the card. If you are running Selesnya, donât splash Jarad, Golgari Lich Lord, or even Izzet Charm. Finding two sources of mana from one of your non-key colors is just asking too much of your deck.

Ratio rounded down to 23

To determine the two remaining lands, look at the casting costs of your least expensive spells. These are the ones you will want to cast early in the game, so you want more of those lands. Perhaps all of your cheaper spells are white, so youâll add two more Plains to the mix.

Finally, the last part of deck-building is to mix it all together and shuffle. Be excessive here. Riffle shuffle a lot. Do pile shuffles, regular shuffles, then riffle shuffle some more. After a couple of minutes, flip the deck over and look to see if the deck is randomized. Break up the large clumps, then flip it over and do it all again. Losing a game because you are drawing six lands in a row is horrible. Knowing that the six lands are all together because you didnât shuffle your deck thoroughly at the start of the tournament will make you sick.

So, you brought what you needed, and you have some basic deck-building knowledge. Sounds like you are ready to go! My final piece of advice? Be a good person. Everyone is there to have fun with the new cards. Congratulate your opponent when he wins or gets a big play off. Smile and chat with the people around you. If you are sullen and miserable, it wonât take long for your attitude to rub off on your opponents and wreck your prerelease experience. Enjoy!