The streets of Ravnica can be brutal on anyone who isn't prepared. Ten guilds, each with their own secret interests, ploys, and allies; it's entirely too easy to get caught up in something that won't end well. The streets can be tough, but they can treat you well if you know what you're doing. Let Ant Tessitore put you in the shoes of master thief, assassin, and saboteur: Lazav, Dimir Mastermind. Can you rise to the occasion and become the master of all of the hidden paths and alleys of the city of guilds?

In Constructed Magic, there are generally a set number of defined archetype that people are prepared for. Some strategies naturally attract more players, by nature of their popularity, power, or play. There isn't really a defined metagame for casual Magic though. Or is there? Over the last two weeks, Abe Sargent has run down his ten picks for the most common casual archetypes. From tokens to control to combo of all varieties, there's something for everyone in Abe's casual archetype compendium.

Ever since Magic began, people experimented with decks that have resonated through today. You canât play kitchen-table Magic without running into decks with ancestors that stretch back to 1993. What are the Top 10 Casual Deck Archetypes of all time?

The goal of this two-part series is to give you ten of the most impactful deck archetypes weâve ever had in casual circles. All were among the first archetypes to evolve in the early days of Magic, and all can still be found at gaming nights across the world. These archetypes have endured the test of time.

To begin, Iâll give you a short bit of history and a sample decklist of what the deck used to be. Then, Iâll build a quick, updated decklist for your Magic night tomorrow.

Are you ready? Letâs get this thing started!

Some of the most powerful and interesting Commander decks are the ones that are built with very specific goals and themes. Sometimes this theme is the Legend at the helm. Sometimes it's a tribal theme, or a particular card or interaction. These types of decks really push the boundaries Commander common knowledge, and help to find new, powerful, and interesting interactions. This week, Bennie Smith has brewed something up around Surveyer's Scope to find out just how powerful this innocuous artifact can be.

Most of my Commander decks are what I call "top down" designs, inspired by a particular legend as the commander. But sometimes there's a card or a combo that can be part of the 99 that gets in my head and demands a deck to live in.

For this deck, the card wasÂ Surveyor's ScopeÂ from Commander 2013. 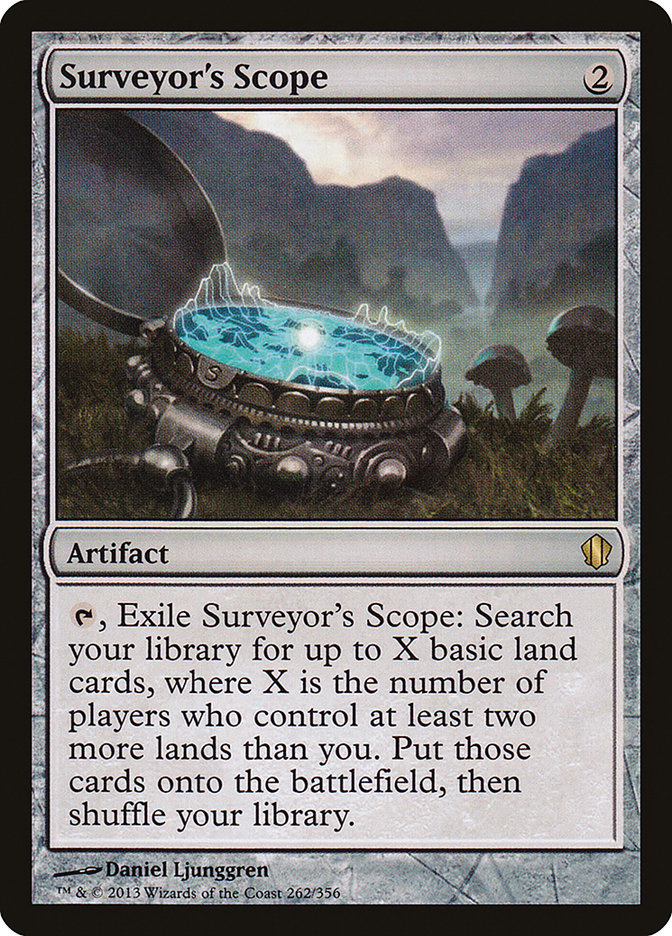 When I first saw this card, I thought it was a nifty tool to help Commander players who stall on land early in a game of Commander to be able to "catch up" and get back in the game. But I couldn't help but ponder why this nifty little card was nerfed by exiling as part of its activation. You don't see that effect on cards unless there's some potential for recursive abuse that Wizards R&D wants to nip in the bud. I was trying to envision R&D doing some sort of shenanigans involving sacrificing lands so you can fire off the Scope to put a bunch of more lands into play, somehow getting the Scope back and doing it again.

Should I playÂ Prototype Portal, imprinting Scope on there so I can do it each turn? How could that possibly take over a game of Commander? Landfall triggers spring to mind, but I couldn't envision anything grossly overpowered compared to anything else in Commander.

So I started a stackâI began withÂ Surveyor's Scope, and as I was going through my stash of Commander stock making various decks, whenever I ran across some sort of land-related card, I'd pull it and toss it in the stack. About a month ago, a few things became clear. BetweenÂ Overgrown Estate, Spitting ImageÂ andÂ Hammer of Purphoros, I was probably going to build a five-color deck.

Also, it was probably going to be base green to accommodate a lot of green's mana accelerants and fixing, so I'd want to try to not get too heavy on other colors in my spell selection. Lastly, my stack of cards was actually way too large, especially if I wanted to run a larger than normal number of lands in my deck. So I went about the hard cuts that Commander deckbuilders are all too familiar with and came up with the following.

Magic is much more than a game. Travel, friends, and once-in-a-life experiences; these are just a few of the thing that this game has brought into many of our lives. This week, Hall of Famer William Jensen shared just a few of his favorite stories from his Magic career, and asked for the community to share some of their favorite stories. It's an awesome celebration of Magic community and culture, and it's something you certainly don't want to miss out on.

Throughout my time playing Magic, I've met a lot of great people, and found myself in a lot of funny situations. One of my favorite things to do when talking about Magic is to tell stories. This week, I decided to write an article to bring you a few of them. Here are the stories I find myself most going back to most whenever I'm trying to get a laugh:

Digital art. Traditional art. What's the difference and how does it end up on Magic cards? Bonnie Bruenderman takes a look at the differences between these mediums, and shares how some artists make transitions from traditional to digital art during their creative process. It's an awesome behind-the-scenes look at the development of some spectacular Magic artwork.

I love digital art. I also happen to love traditional art. I realize there is a distinction between the two, but not the distinction most who I've talked to see. I don't think of one as better than the other.

I think of digital art and traditional art as I think of pie and cobbler: Essentially, the same ingredients (in visual art, that would be use of tone, color, light, space, and compositionâI don't mean the tools) but significantly different results. Ultimately, both are delicious, and made of the same things, yet people seem to get pretty ferocious over whether or not they are equal. That's okay with me because I get to eat more while they argue. My point isâthere are some differences between digital and traditional art that are absolutely worth pointing out (believe me, I sincerely wish my watercolor brushes had an "undo button") but both are, truly, in my opinion, art.

One of my favorite things about traditional art is an inside look at the process, because we don't get to see it that often. Progression is easy to show with digital art. Layers, undo, and saving out history states all make showing the progression pretty simple. Not so with traditional media. Short of video recordings, you only get what I'm about to show you if you're lucky and get to see the sketches.

So here are some examples of traditional Magic art with the original sketches overlaid.

Just click through the stages to see what I mean. Have fun!

Iris, Ephara's oracle is in danger and must be escorted to safety. Alexio is the skynight charged with her protection. Before their journey even begins, Iris foresees tragedy and vows to do her utmost to avoid the ending she has seen. Will this story from Theros follow the true Greek tradition, where fate is immutable and struggling against prophecy only ensures its fruition? Or can Iris and Alexio have a happy ending?

Iris, the Oracle of Ephara, leaned forward in the wooden armchair and carefully probed the small side table until her fingertips touched the clay drinking vessel. She gingerly lifted the cup to her mouth, a thin stain of purple remaining on her lips as she tentatively placed the cup back on the table.

"I do not want to run and hide like a fawn," she said. "If we are to avoid war with those who have sided with the other gods, then I must be here to interrogate captives. You know my gift of foresight only comes from a touch. I cannot be of help if I am hiding far away."

"The enemies' agents have infiltrated the city," said Perisophia, the current head of the ruling council of philosophers known as the Twelve. The Twelve were arrayed in a circle in the center of the great hall of governance. Iris could hear their voices echo off of the massive marble pillars that stretched to the dome far above their heads.

"If you are captured or killed," Perisophia continued, "then you will be of no help to Meletis or Ephara. If we are to avoid open conflict among humankind, we must also prevent the renegade factions loyal to Purphoros from provoking it. We have conferred with the Temple and agreed that you will be moved to the garrison at Soli, where you will be safe until we call for you. The decision is final."

"How am I to get there?" Iris asked, resigned to the command. From one gilded cage to another. Although she lived in servitude to her god and her polis, at least she knew her way around Meletis. Learning the garrison at Soli would be challenging. She would be even more like a captive there.

"You will be escorted by a bodyguard, overland," Perisophia replied.

"Overland, by a single guard?" she scoffed. "Do you hope to get me killed?"