The troubles of a Vorthos are rarely resolved.

Itâs no secret either. There are relatively few concrete rules in the Multiverse of Magic, and even those we are given are ill-defined or made to be broken.

âDemons cannot be Planeswalkers,â but combine a human Planeswalker, a repressed spark, the strange magics of Zendikar, and a hedron-fueled reignition for a rare loophole. âThe past is permanent,â until you take a brisk walk through Ugin's Nexus to alter the history of an entire plane. âDead characters stay dead,â unless you made a deal with a god that leaves you in the planeâs underworld.

You get the idea. The constraints of lore are curious to say the least.

So what are we doing here today? By reexamining previous knowledge and deducing for ourselves, weâre finding answers to questions that plague Vorthos minds. 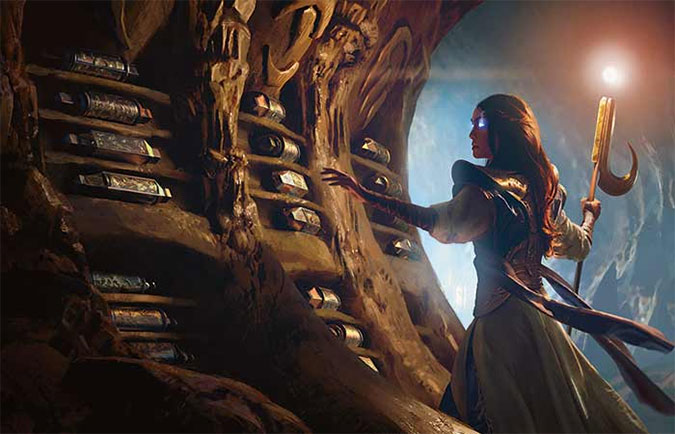 Learn from the Past by Chase Stone

@_SEV8 @Vronos If two planeswalkers get married do their kids also spark?

So two Planeswalkersâletâs just randomly choose without any personal bias and sayâ.â.â.âNarset and Sarkhanâhave a child. Would their child be guaranteed a spark or have increased odds of being given a spark?

Doug answered that it is not guaranteed, leaving wiggle room for the story team before writing, âLetâs not turn the spark into midichlorians,â in the tags of the post. The story fan in some of us wants Narkhan (Sarset?) to have a child so we can find out, but you canât deny that any resulting spark would feel obviously fake, even in a Multiverse filled with countless impossibilities. Would going in reverse, revealing Planeswalker parents for a known orphan Planeswalker like Domri Rade, feel any better? Possibly, but it only adds background details to a single appearance Planeswalker side character whose origins few were curious of.

Be it spark transfer or otherwise, Iâd give this a solid no for the clichÃ©. 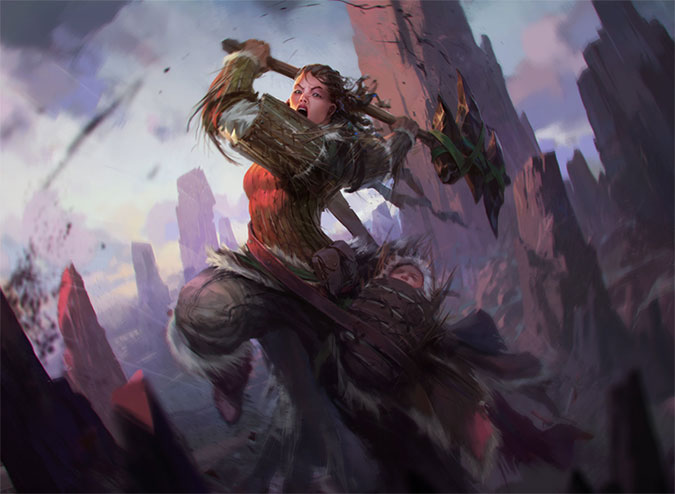 @Vronos Well, CAN an Eldrazi become a planeswalker?

The Eldrazi titans move through the space between planes, so it is both unnecessary and relatively unlikely for an Eldrazi titan to have a Planeswalker spark. But maybe there is a way, even if only for a short while.

What we know about Emrakul is small, but the art book has given us in-world âspeculationâ of her powers:

To their great horror, sages observing the effects of Emrakulâs presence are speculating that some Eldrazi of Emrakulâs lineage are actually transformed and corrupted native life-forms of Zendikar. This might account for their generally bestial shape and suggests the conclusion of the corrupting process that begins with the lattice growths visible on skin and hide. Whether or not this is true, the theory is spreading, and soldiers left with unnatural growths after facing Emrakulâs brood sometimes beg for death for fear of becoming one of the enemy.

If we can believe the sages and combine it with our knowledge of Emrakul from the Battle for Zendikar Playerâs Guide, it becomes obvious that the titan slowly transforms anything organic to become part of her lineage, a member of her brood.

What happens if a Planeswalker is touched by the void of loneliness and terror that is Emrakul, the Aeons Torn? Assuming they are not immune, the Planeswalker would first experience the same lattice skin affliction observed by the sages. A final form would become apparent as reddened vessels sprout an umbrella to cover their body. Emrakulâs brood whither without her presence on the plane, so attempting to planeswalk away at later steps of the transformation could lead to hasty decay. If the Planeswalker stayed on the plane, that Planeswalkerâs reliance on Emrakul would grow until his or her spark extinguished, finalizing another fleshy drone for the titan of corruption.

Sure, itâs not how many people want an Eldrazi Planeswalker to happen, but it is a loophole that exists, allowing for quite the temporary and horrendous answer. 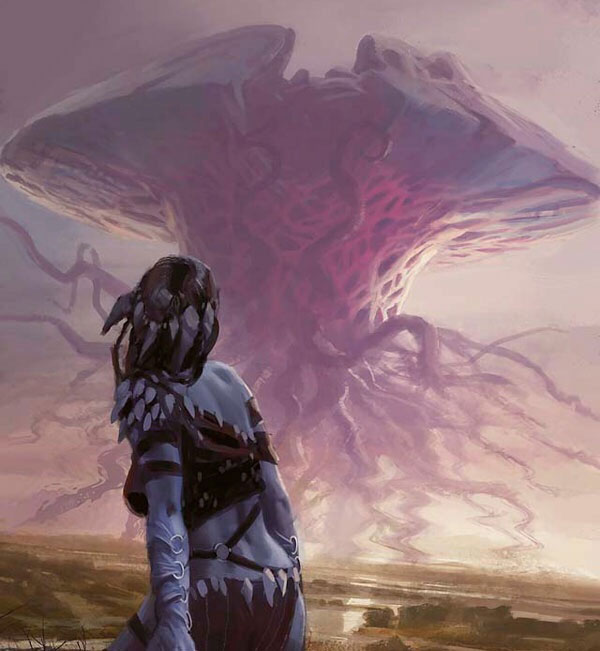 @Vronos Can anything actually kill Squee? Why doesn't he fight eldrazi?

So Squee is probably still alive. Whether anything can actually kill Squee is questionable. From a storytelling point of view, making him relevant again just to kill him off with some magically unique situation (Erebos is Dougâs suggestion from the tags) would be counterintuitive. People know Squee for his immortality, so seeing him again just to spite that trait seems unlikely.

As for the second question, Squee has never been said to have a spark. We last saw him boarding a ship named Victory on Dominaria. Assuming he could be plucked from Dominaria and set up against Kozilek for a cage match of the ages on a barren plane, I sincerely do not believe that the fight would reach a conclusion. The novelty of both his character and curse trumps any real progress that would be made by the titan, creating an endless loop of futile combat and revival. 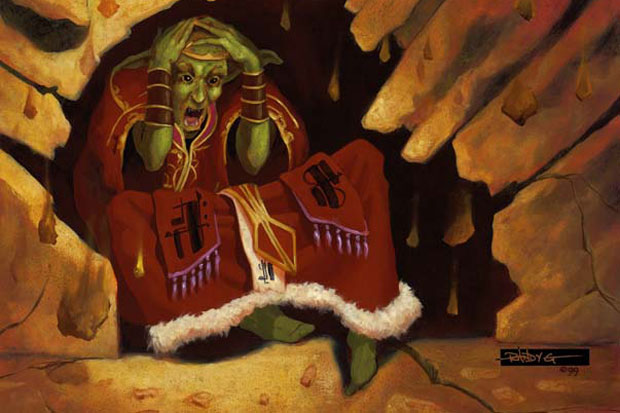 @Vronos Can a Phyrexian planeswalk? What would happen if a Phyrexian compleated an Eldrazi?

To answer the first question, no. Doug has touched on this topic a bit more.

To answer the second question, we need to look at what could happen with contagion and infection. The Phyrexians would want to infect the Eldrazi titan, so they attempt to use the contagion on them by some manner or another. At this point, there are two ways our story can go: Either the Eldrazi are immune to the effects because of their ancient, unfathomable nature or the Eldrazi are susceptible.

This is where we stop and have to think outside of the world. Should the story team conflate two of their largest villains, and what new experience will this bring to the story if they choose to? 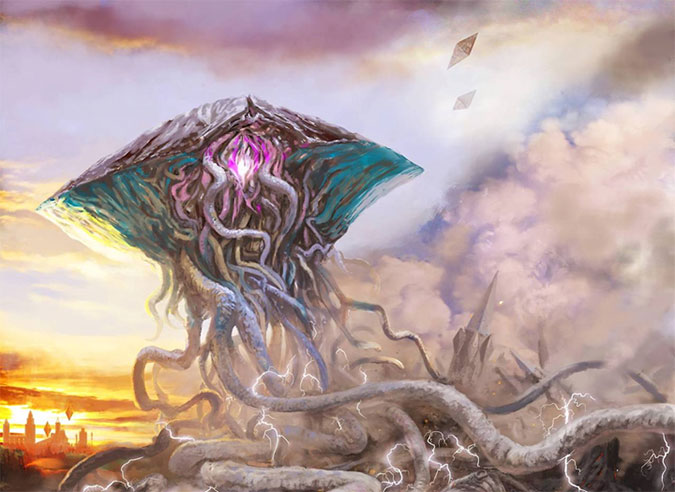 All Is Dust by Vincent Proce

Itâs sad, but these identities are already quite muddled as is. The only titan available for this encounter is Emrakul, who is now defined by her corruption of living things. Her signature lattice structures arenât too far from the Beksi?ski-inspired towers of Elesh Norn, Grand Cenobite and New Phyrexia. While it may stand as a visually ineffable experience, a battle for corruption as Phyrexians transform to Eldrazi lineage only to be reinfected for the ultimate PhyrexianâEldrazi abomination, the end goal appearsâ.â.â.âboring. Will an infected Emrakul ravage the planes, turning half the denizens to metallic monstrosities and the other half to her own brood? Would the infection even stay with Emrakul when she leaves the plane or could she depart at all after hybridization with Phyrexian technology?

Itâs obvious, but it should be said: The idea of a PhyrexianâEldrazi titan creates many more problems than it solves. In an already difficult struggle for definition, some things need to stay separate, and for that, I give a no to the idea. In the meantime, please enchant Ichorclaw Myr with Eldrazi Conscription to quench your thirst for the crossover.