Look at that there Dragon. Everybody loves them a Dragon.

See whether it ends up being a Glorybringer or a Cloud Dragon, there's at least some consensus that Dragons are awesome, and nearly every Magic set needs to have one. I don't really care either way, but it's apparent that some people do. So that's cool. Have you a Dragon, friend.

What makes less sense are some of the other enduring tropes of Magic.

I give you the shame of our game. Be gone.

10. The Phoenix That's Not as Cool as The Dragon

Conceptually, I like Phoenixes. It started with Bogardan Phoenix, and even though it has never in two decades one damn time done what you'd expect from the textbox, it still brings me something resembling joy.

See the big issue is that there seems to be no real restriction on what a Phoenix is about other than a.) being resilient and/or recursive and b.) flying about the place as a Red card. Other than that, some pump up themselves and teammates, some Pyroclasm or whatever, and some basically don't do anything.

In other words, they're unreliable. And unlike them, the token Dragons of the set usually have gigantic stats and stuff. Even if they aren't as reasonable for Standard. Commander will always be a Dragon roost. Phoenixes? Like, really, it's not working. They don't have the fanbase of Zombies or Angels, let alone the fantasy endurance of Elves and Goblins. It makes all the sense in the world, but they're missing something.

So far, the only two varieties of Magic Phoenix are "complete pain in the ass" and unplayable bulk. They need to spread their design wings a tad longer, I suppose. But so far nobody is wearing that t-shirt.

I think it's been pretty much established that not having a Grafdigger's Cage level of fail-safe in your formats is a dangerous and pointless gamble in current Magic design. That said, sometimes cards try to be so on the nose with a sideboard purpose that they find themselves uselessly narrow in all other cases to the point of being ultimately useless in general. Other times, a card will have multiple sideboard goals, but it has to do them both in a lessened way to avoid being too generally efficient. The result is it's generally not good at hosing anything worth hosing. And then there are cards like Blightbeetle, where the textbox makes sense, but the numbers accompanying it on the top and bottom right of the card are so strangely wrong that the textbox may as well not be there.

8. The Transparently Fixed Version That's Fooling No One

You really should've waited until well after the next block before you exposed the obvious here. Really, we could've all waited.

I know the goal wasn't to fool anyone with this run of tributes, but still, it warrants mentioning for completeness's sake.

I have no doubt David McDarby designed this new card. Maybe he just had a hand in it. But he was in the room.

Honestly there's so many of these it was hard to decide which to do pictures of.

Why are so many of these Black cards priced like they're from Revised? You know what? Here, have some more.

So yes, the Black mythic rares seem to be a bit more kept down than the others. Intentional design glitch or subtle societal commentary? Hard to say.

6. Crested Sunmare can Wait 15 Minutes Before Paying Off, Thanks

I knew as soon as Crested Sunmare hit the scene that we'd start seeing real Horse cards for the first time since Nightmare - or Chameleon Colossus, depending on how you want to call the balls and strikes here.

The thing is just - like, can Crested Sunmare just wait a minute? Griffin Canyon came out in Visions and has no payoff in sight. The number of people that have died between Visions and now is astronomical. Who knows how many of them passed never getting a Griffin worth a damn (shut up about Chameleon Colossus!)? And yet, the Horse people tap their watch a few times and now we have Standard-playable Horses and Horse rares all over the place, including that My Little Pony specialty release! They're going to keep trotting up to cut in line over the next few years. I can feel it.

I feel like if the Minotaur people are pretty much still waiting well into the Theros sequel, the Horse people should have to ride on a while longer. Like, 2047 at least.

5.The Unbeatable Story Cards With No Shelf Life

This is a problem that's been on the radar for long enough now that we're starting to see some curvature to this effect where a giant predictable gap comes between the theory of the idea of an epic fantasy story featuring larger than life characters versus the practicality of that story having nearly no functional connection to the experience of playing hundreds of games of Magic where those same characters are so above reasonable relative to the other game pieces they've been put around that they ironically become less endearing.

I'm not a story person when it comes to Magic really, so it's hard for me to say exactly how this process is going in terms of reform.

I guess it's down to if Oko was a big story card or not. If it wasn't, I'm not sure how this is going. If it was, this is somehow getting worse.

Are there really more or less packs sold by whether or not we check all the boxes on the member berry breakdown? Did the lousy Mardu Core Set legend really have to be a Kaalia?

Here's what I think is going on: A lot of people that are creating Magic right now came up in the era where these characters had some kind of connection to what the then players, now creators, liked about the game. The issue is that Magic has done its best while hauling a boatload of never look back; for over a decade we didn't repeat new set mechanics very often, we were in different setting all the time, and the first swing at The Gatewatch (The Weatherlight Star Wars experiment from the late 90s) was very intentionally squashed after several seasons. And I think in general, those characters are more well-remembered by the players exposed to them than The Gatewatch. That was thought to have not worked.

Combine the tribute to fond memory remakes with The Gatewatch story disconnect and improved mechanisms for balance in Magic and you end up with stuff like this:

It's fine once in a while, but when it's done to death, all it does is urinate on the mythos the character had before and give base level Magic thinkers ammo for the false intuition that Magic used to be better than it is now. It's not worth it.

Make Teysa 4 a new thing that doesn't have to compare to expectations she can't live up to. Call her Betty and let her work third shift at a diner. This isn't a film franchise; it's a card game. We want to solve new problems and get new stimulation. That has to include new characters and stories, ones that are fleshed beyond franchising mascots and tributes to fond individual memories.

3. Seriously, Who Cares About These Turtles?

God forgive me, but I'm back on my bullshit again.

The jobber tribe of Blue will always be Crabs and other various claw-wielding nothings. We don't need this!

And to the person ready to link the "I like turtles" kid video in the comments: We don't even know if that kid plays Magic!

2.The Flagship Green Idiot With No Self-Awareness

Nobody is really clamoring for Questing Beast to be banned; I don't think there's an issue there. The more nuanced look is more at what it means that whether it's good or not makes no difference to anyone because haste basically turns all these mythic one-dimensional furboobs into the same thing: a compulsory choice for that slot in all decks.

While haste is sometimes the obvious push that came to shove, the issue is more broadly when rarity is overly predictive of a slot, rather than through niche utilities discovered by players and deck-builders. In other words, you should really have to think about whether or not you use Boggart Ram-Gang or Ashenmoor Gouger. Cards like Questing Beast don't really allow anyone to deliberate over anything; it's mythic, it's been stocked with a kit the size of Panama, and that's just how winning works. Even when it's a card that's outpriced from being too in the game-to-game mix like Gaea's Revenge, it's not like it's more satisfying when it does show up from when it doesn't.

We know we need cards to win games; we have the most fun when there are multiple options for a given role within a deck, and this trope makes for a really low potential experience in terms of player involvement. We'll still buy packs if Questing Beast is a 4/3 or a 3/3 or doesn't have haste or whatever. In fact, we may buy more.*

*There's probably a ton of inside data that says otherwise on this, but those studies probably have more systemic insulation than a winter home with social anxiety, so who cares what they say, honestly.

1.The Off the Rails Multicolored Uncommon.

My idea: Make all these gold uncommons that end up smacking Standard around by virtue of the inexplicable myth that "playing the same lands you would be anyway" is a deck-building cost a tad more expensive to, I don't know, cast.

Contest over. I win.

Playing with these cards is literally like getting to use Sol Ring in Standard. Change my mind.

I'm not just going to rant for a few minutes and then offer nothing of value to offset it. What am I, Matt Sperling?

Here are some Magic things/trends that should go on indefinitely because they're wonderful:

Magic is hard to get into at first, but even after you're comfortable, it's still going to be complicated. Having cycles of cards makes a very challenging game more digestible at absolutely no cost. Yum.

When a type of creature resonates and gets picked up for more gigs, it's a beautiful thing. Couple this with Giant Spider's longevity as the most initially Core Set'd reprintable card, a prestigious honor, and it brings me to tears.

Knowing When To Break Your Own Rules! 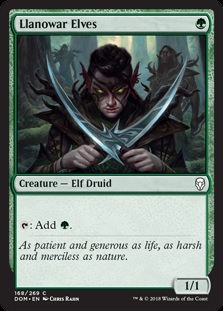 Simplicity Where It Can Be Had!

Magic actually has way more positive trends than played out or harmful ones. I could do this all part of the list all night.

What might make a better article is suggestions for good ideas that Magic hasn't already tried. Hmm...