There's nothing worse than a false promise.

Between Magic Online and Yuuya Watanabe, Magic has had far too many.

This is a Magic promise that will be kept: I don't know anything about these new Modern Horizons previews. I've incidentally seen a few of them, but those don't count. Cause I didn't think about them.

You can trust me, see?! Cause I don't think!

I'm kidding. I do think. I just haven't thought about these premeditatively. These are the honest, kneejerk critical thinkings of me on the spot. I'm not scouring the world looking for other opinions and bringing them here and passing it off as my own work. I'll have plenty of time for that next time after I get everything wrong on this swing.

I own over a dozen copies of Horizon Canopy. That uniquely qualifies me to do this.

Here are some pieces of paper that will affect our lives:

Magali is the best artist that ever lived. So, I'm down there.

The best flying creature in Modern is Arclight Phoenix, full stop. Second place may as well be Chimney Imp for all the dominance number one has. And boy, does Arclight Phoenix strike me as a card that does not care about Serra, either in its own dugout or on the other side of the battlefield. Pass.

On the other hand, most of the Humans in the format are dead. They've all turned to Spirits, and Serra could certainly party with them. This is a card with play patterns that are very calculated; a planeswalker that ultimates after a single activation of the first ability is a very Modern-focused philosophy.

But I can't get it. I just can't. I think it's probably a viable sideboard option, but it needs greater contextual changes to the format in order to be at its absolute best. It's a four-mana planeswalker and yeah, maybe it has virtually nothing else to do with Jace, but you know, if you need things in that lens here you go: it compares unfavorably to Jace, the Mind Sculptor.

Tip: Speaking of Spirits, always be extremely discerning when thinking about non-creature spells in Aether Vial decks. The demands of deck-building restraint in decks like Spirits or Humans in combination with a card like Serra are much steeper than for decks less focused on the absolute ceiling of their functionality.

I'd also like to dedicate this article to every Vorthos pleb that insisted for years that because characters like Serra or Yawgmoth or whoever were "dead," that we'd never see them on cards in new products. Imagine holding this view while simultaneously playing a game where the least powerful entities in the world frequently get up out of the graveyard and walk around none the worse for wear. Unbelievable.

Whether it works or not, I don't know, but this is the closest we've come to "the card" lots have been advocating for in Modern for a long time.

Man, that goes down smooth.

Obviously this card is being assigned "the job" of making this format encourage the Legacy play patterns that many celebrate but few still get to play. If this card "works," the outcome will be a format that has to play a little more fair and a little less degenerate. That's a lofty task, and without the card saying "This is Literally Force of Will," it's hard to say it's a sure bet to do what it's transparently been tasked with doing. Magic's quantum machinations below the intuitive surfaces make fools of us time and time again.

But I hope this is what we think it is.

Even without this card, it's a foregone conclusion that eventually Goblins will happen. They make multiple rare Goblins every year, and they're rarely just outright embarrassing.

I'm also starting to get "Stirrings versus Ponder" logic zaps when I think about Aether Vial and Birthing Pod and their relationship to Modern. Oy.

Either way, another critical piece of the tribal Goblins puzzle is put into place. Legion Loyalist loyalists everywhere are hoping this is the one to finally get it done. Without seeing the full set and the inevitable implications on the Modern ecosystem, we don't know. Goblins' greatest long-term threat may not be its own inertia but rather the question of whether Aether Vial ultimately belongs in the format in perpetuity.

I think this card is real.

This is the type of card that is going to reward a lot of skills that not enough people work on in paper Magic: reading social signals and knowing yesterday's decklists card-for-card. Like its progenitor, this is a card that will do wonders for the informed and make an ass of those just copying and pasting lists. Bloodghast comes to mind, Dark Confidants you need to get rid of before they burn you up, Lingering Souls gasoline...there are just too many uses for a card that asks so little of an experienced Modern player and deck-builder.

Note that the card does not get exiled (as it would against Force of Negation or something) so there are plenty of places where this effect is certifiably miserable. A 1/1 menace with no disruption based text in the mid or late game against a deck like Mardu Pyromancer, for instance, is probably a sad, sad thing to live (die) through.

But for the most part? Take me to therapy, baby.

Deranged Hermit with a mechanical swap makes sense for Modern legality, but I hardly think this is the card to turn Siege-Gang Commander and Cloudgoat Ranger post-Terminus second wave types into what the format is all about. It's going to be stout in Limited, it's going to be all over cheeky Commander decklists, but Modern? Sorry, 1997. Game's changed.

Sidenote that I find the name lazy. #Switcheroo

I know it's the one storm card they kind of got on the nose - it saw tons of Standard but didn't break anything like its more famous counterparts - but, what does this do for Modern? It has some inherently interesting play to it, but especially at uncommon, I find it really amazing that this was the iteration of this effect that made the cut. I have more Path to Exiles than I need, but for those that don't? I'm going to feel for you every time you open a Wing Shards.

Pretty sure we're long past the days of Modern Burn wanting the number "two" appearing anywhere but on the bottom right corner of its creature cards. Nevertheless, Firebolt is a welcome first pick under any default Limited setting. Who knows if that's what they're doing here, though? Imagine a world where every creature is an Eternal Witness or a Deep Forest Hermit! Suddenly Firebolt gets real bad. Just noting that in the outside instance they made it a goal of the entire set to trap people who believe in Magic's oldest tenets.

Tip: A word of caution: War of the Spark fits this "curveball!" idea in a few ways, so don't be surprised if a few of the sure bets are total swerves in a set like this. Many of us wouldn't think of letting a planeswalker hang out for an entire game, but of course, we learn something new all the time. There are a lot of brilliant Magic minds in Renton right now, and this is the kind of thing they're not only good at but actively get off on. Stay limber. Stay open-minded. It is the very job of the people who make this game to turn your expectations upside down. 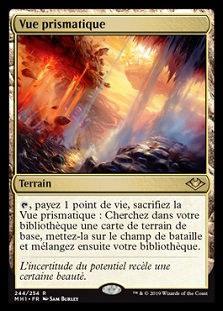 T, Pay 1 life, Sacrifice Prismatic Vista: Search your library for a basic land card, put it onto the battlefield, then shuffle your library.

Imagine a world where people who cheat at Magic didn't get to touch their own deck eight times per minute. Now keep imagining it because in reality, we love to shuffle!

I've shuffled hundreds of times while writing this article, just to feel alive.

If Modern shuffle were shuffle a sentence shuffle it would shuffle read shuffle like shuffle this. 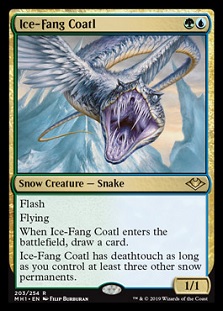 What a strange little animal. Got some Elvish Visionary. Got some Baleful Strix. Got some text about snowcones.

I'm into it, but this, to me, is now the coolest card in the set that has to do the most work to fit into Modern as we know it. Unless I'm missing an obvious one (Snow Shift?!), this isn't a card you just check into an existing deck. Modern is pretty demanding about getting everything out of the cards you play; and to get all of this one, you're going to have to stay up late a few nights and do your homework. Who got Skreds for trade?

Tip: I want to proclaim here and now that I have an inherent bias against Blue and Green cards, especially in a Limited Magic setting. They are historically the weakest removal colors, and that's not a game I'm comfortable playing most of the time. I'm going to presume in a set this powerful, you're going to want to profile the Simic strats at least as hard as I do. Kill or be killed.

We don't get firsts in Magic all the time. It's pretty great that not only are we getting a sort of "extra" preview season right now but that the nature of the set requires us to examine how we evaluate all cards and all sets. The goals for this set are radically different; so, too, should be our attitude going in.

Modern has long been a place for diverse archetypes but not always diverse gameplay. If the rest of this set can go places the format has not been able to until now, we could be playing an entirely different game by the end of the year.