Yesterday (based on this article's publication date) was my 36th birthday. The older I get the more I accept that birthdays are largely meaningless. it's not as if you wake up that morning and feel any different. But birthdays do undeniably afford us some liberty to say things like, "You should let me hit you for 17 damage, it's my birthday!" Whether they work or not is a different story.

So, I'm taking advantage of that sweet birthday carte blanche to share 36 thoughts I've had about Commander that don't necessarily warrant their own full-length articles or, depending on what you fine people think, could serve as springboards to articles down the road. Please enjoy.

1) My favorite card of all time is always a tough question to answer, and one that can always change. Right this minute I would go with this sullen boi: 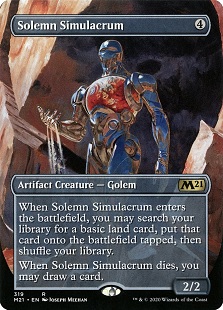 I'm loathe to declare anything an "auto-include" in Commander - and as you'll see later, Solemn Simulacrum didn't make the cut in my newest brew - but this is as close as it gets. Cheap to cast, helps us ramp, provides a decent body and then draws a card on his way out the door. It's just so much value. (And the Joseph Meehan art from Core Set 2021 is exceptional.)

2) My least favorite card of all time is one that I abused in my defunct Brago, King Eternal deck. It made me feel bad playing it even there where it made a decent bit of sense, but what makes me truly despise this card is that it has a habit of showing up in decks where it really doesn't accomplish anything other than annoying the rest of the table.

Look. If you're playing mill as a strategy or actively trying to loot your opponents' graveyards, sure! If you're not, I don't believe there's a compelling argument to play this card. At least not against me. It's my birthday.

3) The current Commander ban list is fine. If I were on the Rules Committee - no, thank you - I'd entertain a conversation about unbanning Coalition Victory, and that's about it. Everything else that's there belongs there and I don't think anything that isn't should be added. Which leads me to...

4) Cyclonic Rift is fine. It really is. Yes, it's a one-sided all-upside board wipe. It's far from the only one.

Sure, those other cards have disadvantages that make them "worse" than Cyclonic Rift - they're more mana intensive, they're sorcery speed, etc. - but each wipes your opponents' boards and leaves yours right where it is.

5) My go-to "house rule" involves mulligans. I have no interest in reshuffling my deck over and over and possibly having to start the game with three or four cards in hand, and even less interest in making my opponents do that. When I play, we draw seven cards until you get a functional hand - I have faith that we can be humans and not abuse that to keep digging for the best possible hand.

6) Red needs more help to stand on its own in Commander than White does. Don't look now but in the past year or so, White has gotten a ton of new toys that allow it to do things it couldn't do before, or at the very least couldn't do well. To me, however, Red feels like it's stuck in neutral. It's been 27 years. I think it's time Mono-Red got to expand its portfolio beyond goblins, dragons and burn.

7) That being said, goblins and goblin-related cards consistently have the best flavor text in the game.

8) I love tribal decks but I really, really don't want to build Slivers. Just feels like easy mode and an invitation to get hated off the table in short order.

9) I hope Energy returns as a mechanic. I know it borked Standard (what else is new) but I'd love to get an energy-matters commander and new cards to support it.

12) Planeswalkers shouldn't be commanders beyond the ones that have that ability built-in. Nope. Nope nope nope.

13) Is there any better feeling than listening to your final opponent plot out how they're about to kill you, knowing you're holding the thing in your hand that's gonna stop them? I think not.

15) Smothering Tithe is fine. It's far less of a problem than Rhystic Study because Rhystic draws cards and Tithe does not. And guess what?

16) Rhystic Study is fine, too. Even if Rhystic, Tithe, and Mystic Remora are all annoying as hell with the "are you paying the ___" of it all, they're fine as cards.

18) Mass discard is the worst. Save that for competitive playgroups; your casual opponents probably won't love you for making them trash their hands over and over again.

19) Actually, I lied. Mill is the worst. The problem with mill, as I mentioned a little earlier, is that it very often shows up in decks that don't really benefit from it. Using Altar of the Brood and Brago as the examples again, it made logical sense to pair them, since Brago would be flickering numerous things every turn. But I gained nothing from all those Altar triggers. It merely made my opponents more frustrated. This happens a lot with mill. If it's not the focus of your deck and/or you can't take advantage of what's in your opponents' graveyards, you should take a really hard look at whether or not you should be milling at all.

20) Mass land destruction isn't necessarily the worst. The key word there is "necessarily". If it leads directly to your win condition, then sure, I can see it. Not if you're just destroying everyone's lands for kicks. Magic is a game of resource management first and foremost so denying resources is a strategy. But yet again I must emphasize that Commander is a social format where the goal is (or should be) for everyone to have a good time.

21) Extra turns are neat. Just do something with them.

22) I like fast mana. Commander games are long. If I'm putting aside two to three hours to play Commander I'd love to get at least two games in. Fast mana moves things along and maximizes everyone's time. Of course there are situations in which the mana flows a little too fast but that can be said of virtually everything in our format.

23) Foiling out your decks is good and nice, BUT be mindful of the fact that it can be perceived negatively. The gap between "I love this deck and I'm proud of piecing together all these foils" and "look upon my largesse and weep you miserable poors" is smaller than you think.

24) The Battlebond land cycle should be completed and then printed into oblivion in every product possible. This is a no-brainer. Because....

26) Resist the urge to tell people what to do with their decks. Asking someone if they've considered adding a card is one thing. Saying definitively that they need to change their deck is another. Commander is where we get to build and play our decks however we want. We all need to respect that.

27) When you're playing Commander, play Commander. Getting four people together to do anything is an achievement. The greatest sin we can commit is to not respect each other's time. Sure, you can check your phone now and then or have side conversations that don't involve the game. But we've all - myself included - been guilty of completely checking out for an entire turn or more, and then having to go back and ask what just happened. Having to try three or more times to get someone's attention because you're going to attack them or destroy their stuff is immensely frustrating. Pay attention. Be engaged.

28) You don't need a zillion decks. If you have the time and resources, go for it! If all you have is a deck or two that you really enjoy playing and refining over time, that's great too! Don't feel as though you have to keep up with the Joneses.

29) A little empathy goes a long way. If an opponent can't draw a land to save their life and they're in danger of falling hopelessly behind, tell them to go tutor for a basic or two.

30) Be prepared to play politics. There are decks built entirely around politics, but even if no one at the table is playing one of those, at some point in a game there will be deals to be made. And -

31) Play politics the right way. If you make a deal, honor it. Nobody likes being deceived. It's easy to dismiss it as "just a game" but the feelbads are real and lasting.

32) No, you really don't have to make sure all your basic lands match or that you have all the right tokens. It isn't that serious.

33) Comeuppance is my favorite card to cast because I get to yell, "IN RESPONSE COMEUPPANCE!"

35) Imprisoned in the Moon is the best Blue card a lot of people aren't playing. And speaking of Blue...

. Whoops! This is strictly a "cards I had lying around" build at this point, and once I actually get a chance to play it in a game I'll see what I decide to do with it. See if you can spot the unorthodox sub-theme I worked in here:

37) Final thought: Be good to each other, support each other, and remember that a rising tide lifts all boats. Yeah, I did one extra thought. It's my birthday.