Every week it's something new and unfortunate. Every week. I'm still shocked by it, but I can definitely feel myself becoming desensitized to it as well. The state of Magic in 2020 directly correlates with the year as a whole.

Recently I've felt like more of a Magic journalist than a Magic strategist. Which is not something I know how I feel about. My Magic pedigree is something I'm very proud of. I have a Pro Tour Top 8. A Grand Prix Top 8. I was at the Magic Online Community Cup in 2014. I've done so many things in the game that I've wanted to do, and what I'm known for most is playing obscure, janky decks to moderate success; finding, creating, and giving people weekly options other than the Tier 1 strategies that are so prevalent in formats.

But here we are, week after week, talking about the state of the game, the cards that are oppressive, the cards that are no longer legal. It's become rare that I actually write about or show off a deck, and this almost makes me a bit self-conscious as I hope my audience is still interested in my non-decklist content that's been popping up week-after-week as I commentate on the state of Magic as it progresses, or rather, regresses.

As we likely all know, Uro was banned on September 28, making it the 5th card in Standard to currently be banned, and frankly, just like Oko, I'm tired of talking about this stupid Titan. The number of banned cards was previously at 10, but we lost Teferi, Time Raveler, Growth Spiral, Wilderness Reclamation, Agent of Treachery, Field of the Dead, and Veil of Summer with the rotation. So, on the bright side, the banned list has five fewer cards. On the dark...side(?) we're still seeing bans on an almost weekly basis, so my hope for the banned list to remain at only five cards is low. Especially now that we still have Lotus Cobra, Omnath, Locus of Creation, and Lucky Clover/Edgewall Innkeeper in the format.

Uro was A Problem, but not THE Problem

I know I've gone over this before, but a card like Uro is one minor issue in a format full of issues. Obviously, the real problem is how cards are currently being designed in Standard, but even besides that, I don't think Uro is the biggest culprit in Standard right now. I think Wizards had several cards on their radar - Omnath, Lotus Cobra, Scute Swarm, and Uro - and only one of those cards wasn't in the newest set that has only been out for a week. I don't think this is a coincidence; Wizards of the Coast is a business, after all.

That being said, that doesn't mean I have to agree with this decision. If you take a look at the most recent tournament results you'll see that even the Temur Adventure decks are now Four-Color Adventure decks that are playing Omnath, Locus of Creation.

When there are two top tier decks in the format, both of which are playing four copies of Omnath, but only one is playing Uro (and sometimes not even the full four), it seems pretty obvious to me which is the problem. But let's break down how they work anyway:

Based on this, I feel like Omnath is just better on nearly every metric than Uro aside from a) casting cost, which has clearly been a non issue in every deck running four copies, and b) being a 4/4 vs. a 6/6.

I keep self-consciously worrying that I'm harping on Standard too frequently, but I don't think that's the case, and there's evidence to support that it isn't just in my head.

This week Brad Nelson wrote a Google Doc article about his feelings on Standard.

Cedric Phillips wrote a pretty scathing indictment about the format on Twitter.

It used to be when you wanted to draw some cards and have a creature in play, you'd have to spend five mana on a Mulldrifter. Well, at a certain point Mulldrifter became Cloudblazer. Then it became Oko, Thief of Crowns. Then it became Uro, Titan of Nature's Wrath. Then it became Omnath, Locus of Creation. All of these cards played both offense and defense, while providing consistent streams of card advantage. And all three of the latter cost less than Mulldrifter. Think about that when you think about how Mulldrifter is still playable in an incredibly powerful format like Vintage Cube. It's kind of wild.

Am I glad Uro was banned? Yes, because I don't feel like it's a card that belongs in a Standard format. Do I think the banning will fix Standard? No, I don't. I'm going to be watching the format unfold from a distance, unfortunately, simply because I don't think it's safe to dive in yet. This makes me sad, because I think new Standard formats are some of the most fun times in Magic, but for the past year, I have not felt this to be the case.

Magic is Still Great in Other Ways

Thankfully, I feel like Wizards knows how poorly Standard is perceived at the current moment. There has been a Cube up on Magic Online pretty consistently for the past six months or so, and I've been having a good time with Historic on MTG Arena. That's one of the best parts about Magic: there are always other formats and other ways to play the game. Standard isn't the end-all be-all of Magic, and I don't think it will be unpleasant forever. That being said, I don't really have an idea when it will feel balanced again, and that makes me sad. I miss good, thought-provoking Standard formats, in a time before they looked like this: 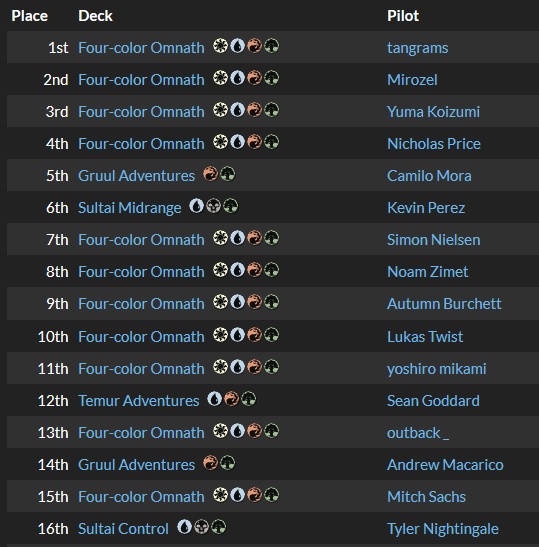 This is the SCG Tour Online Season Two Championship that took place on the 27th. It's not good. What's even the incentive for playing a non-Omnath deck? It's worth noting that two of the five decks in the Top 16 that weren't playing Omnath were playing four Embercleave, and two of the decks were playing Uro. The other dark horse was a Lucky Clover deck. As others have questioned, if we ban Omnath, do we have to deal with mono Adventure decks? The problem we're experiencing is when you make the best cards in a format so head-and-shoulders above every other card in the format. Cards like Uro, and Omnath, and Oko are like billionaires in America. Sure, there are some millionaires in there as well, but the wealth disparity between them is so huge that it's kind of a joke.

What do you guys think? Was Uro the problem? Will Standard heal after his banning? Or is there a larger problem at play? I'm really curious to hear what you guys think, so be sure and leave a comment down below with your thoughts. As always, thank you so much for reading, I hope you're all staying safe, and I'll catch you next week!