After a couple of weeks of varying schedules, you finally work out a routine that can manage your explorations along with regular visits to the old man. You donât see him as often as you once did, but his admission of wanting you to scour the forest beyond the monastery has allowed you freedom from guilt.

The day is cool and crisp, clearly autumn weather. Sadly, the leavesâ colors are dulled by the inordinate amounts of rain that have fallen since summerâs end, but it is not raining today. A dark-orange glow is visible to the west where the sun has just set, an explosion of magic you cannot explain still covering the sky with light.

As you enter Issar Roonâs study, you find your shoulders relaxing thanks to the warmth within. It is the first time in many months you have been happy that the room is warm and stuffy. You find yourself wondering what will become of your adventures in the woods when the snow falls and the warmth of the room calls your name each night.

You put the thought aside as he greets you.

Thank you for coming. I appreciate a reliable and prompt student, and you have grown since you first came here. But do not think that that allows you to slack off like those other loafers you work with!

Now, then, you are looking for a tale, yes? I believe adding to my geography lesson will enlighten you about why it is so important. Perhaps Iâll add another upon your next visit as well.

You wonder if the old man has finally lost his mind completely, harping on geography, but keep the thought to yourself.

Geography takes longer than a lifespan to truly change, and that is why humans often ignore such things. Planeswalkers, however, can live for millennia, or they once did. We have yet to determine an expected lifespan for the newest generation of âwalkers. It is incredibly difficult when they insist on getting involved in mortal danger so often. However, I believe it safe to assume that they will live much longer than humans, provided they stay out of trouble. So, you must learn. 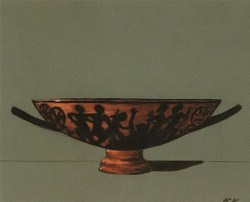 Do not fret. I am done talking about the lay of the land specifically. Today shall be about what altered Terisiareâs geography so profoundly. I have mentioned them in passing many times, but now I shall talk of the Golgothian Sylex and the Sylex Blast in full. 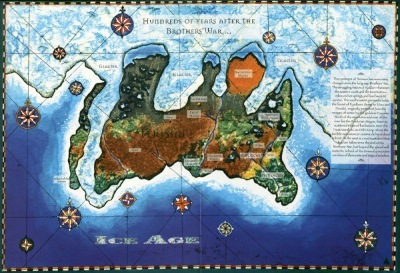 At the sound of something other than geography, your ears perk up, and you listen to the old man attentively.

Feldon, a mage and archeologist whom I shall tell you of one day, found the Golgothian Sylex within the Ronom Glacier, along with many other artifacts. It was said to have been a bowl made of a copper material that could withstand any weapon or spell. Upon the outer rim, a quote was writ in glyphs: âUse to wipe the world clean, to topple empires, to start again.â

I cannot say from where the powerful artifact came before Feldon discovered it. One can only assume that an incredibly powerful sorcerer, most likely a planeswalker, created it in a fit of madness.

Though Feldon discovered the artifact and intended to keep it safe, treachery and fate intervened. When Mishra invaded the western lands of Terisiare, the Golgothian Sylex fell into the hand of his trusted lieutenant, Ashnod.

When she discovered Phyrexiaâs manipulation of Mishra, she altered her allegiance. Hoping Urza could defeat the invading plane, she passed the artifact along to Tawnos, Urzaâs friend and advisor. Tawnos took it to Urza at once.

At the penultimate battle of the Brothersâ War, Urza did the unspeakable: He activated the Golgothian Sylex. Finally seeing the Phyrexian corruption within his brother and unable to reason with him, Urza chose a final ending for the war, and paid a large price for it. All relevant forces from both sides were annihilated, almost the entire island of Argoth and its tectonic plate were destroyed, and Urza himself died, or would have had he not ascended.

While the Sylex Blast did not create anything nearly as dangerous as the Dead Zone on Ulgrotha, the energy released was unimaginable. Destroying Argothâs tectonic plate led to a change in ocean tides, currents, and weather patterns, and helped in the eventual destruction of Terisiareâs landmass. In fact, it opened a rift in the Aether, one of the many involved in events between the Phyrexian Invasion and the Mending. The changes in weather were not solely from Argoth, either. The energy released brought cold from the North over the next several centuries, allowing glaciers to cover much of Terisiare and begin the Ice Age. Finally, some power from the Sylex Blast beyond my ability to see caused the formation of the Shard of the Twelve Worlds, a cluster of twelve planes revolving around Dominaria, cut off from the rest of the Multiverse.

Several millennia later, after the Ice Age, the Golgothian Sylex reappeared in the hands of Ravidel, a dangerous planeswalker bent on revenge. Using it as a threat hanging over the heads of his most powerful enemies, Ravidel was able to go about his plans unhindered and unmolested. But those who opposed him did not sit idly by.

Jared Carthalion and Kristina of the Woods went in search of something capable of destroying the Golgothian Sylex. The quest is a tale I have yet to tell you, but they managed to succeed. They destroyed the powerful artifact once and for all, preventing others from unleashing the power contained within.

That is the end of my tale. The Golgothian Sylex no longer exists, and will never again create such horrible destruction and devastation. The artifact not only killed and destroyed everyone and everything on Argoth that day when Urza activated it, it was also responsible for all of the death and suffering caused throughout the Ice Age and the Great Mending. The Multiverse is far safer now.

The old man ends his story with a sad look upon his face. Thinking it better not to disturb him from his thoughts, you slip out the door and walk back the way you came.