When itâs time to leave subtlety at homeâ.â.â.â

When nothing else will do but turning things sidewaysâ.â.â.â

When you just want to watch the world burnâ.â.â.â

Mountains are the uncompromising behemoths of the natural world, the crotchety old men that refuse to give up the fight. Resisting the obliterating crush of shifting tectonic plates, they jut defiantly from the earth. Old as the aeons, they were formed long ago and will be around long after. Plains, forests, swamps, these are but a blip on the radar compared to the timeline on which mountains exist. Towering over the rest of creation, they stare down at the younger lands with an insolent sneer.

These are the lands that power the fiery engines of merciless destruction.

Where illustrations of the other basics thrive on hints and suggestions, there is no need for such trivialities when youâre dealing with a pile of rocks several miles tall. Beyond even black and white, the world according to these lands is only one shade of deep, glorious red. Just like the iconic spells that they power, mountains need no special introduction. They are the very representation of power and inner strength.

Buckle upâweâre about to go on a trip to the core of the volcano. 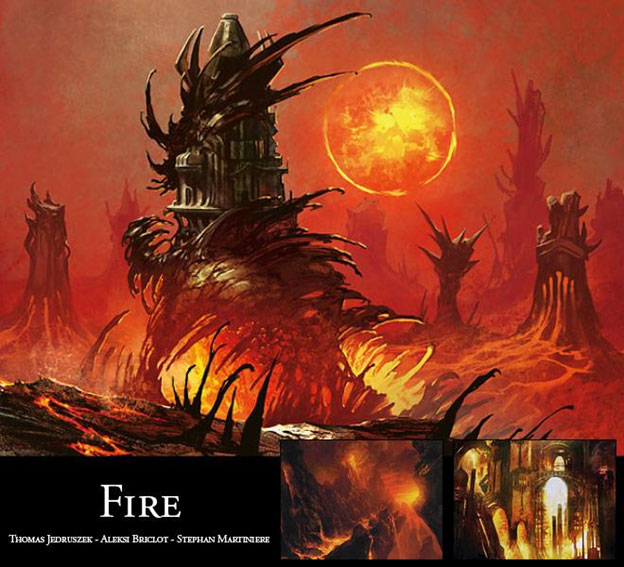 The first and most obvious stop on our journey is in the fiery depths of the mountain. It only makes sense: If youâre going to tap these lands for mana that is represented by a giant, stylized fireball, there had better be a significant number of mountain artworks that are, indeed, on fire. Artworks from this genre all pull from a very tight range of the color spectrum, enforcing a sense of unity even among a vastly different number of pieces. Ravnica, Phyrexia, Alaraâfire is fire no matter where you go. The result is one of the most coordinated series of artworks the game has to offer, transcending artist, set, and influence.

These are the artworks that custom-tailored to the red Planeswalkers who thrive on burn spells. Once youâve loaded up on Chain Lightnings and Blood Moons, the next step is to grab a white-knuckled fistful of these bad boys and get ready to tap for pain. Remember: Itâs called Red Deck Wins, not Red Deck does Okay. 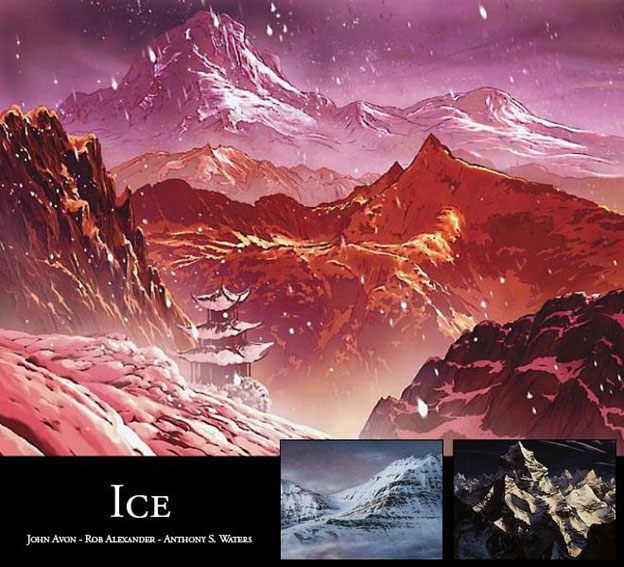 A natural consequence of the increased elevation, the snowy heights of the mountains makes for a great contrast to their igneous brethren. There is a different kind of power on display here, the contemplative quiet of evenings spent tending the hearth in a secluded cabin. Things move slower here, according to the dictate of the mountains. Woe to those who take the frozen pace for granted, for it only takes an instant for the snowy peaks to erupt in avalanche. Colors tend to be more subdued in these works, though they do for the most part still pay tribute to earth tones and sunny yellows that form the core of mountain paintings. Many of the artists use the snow as a tool to illustrate something we rarely get to see in a static painting: wind.

For those hankering for a bit of irony in their lives, the ice-capped heights has plenty on offer. The chilly heights are a great match for Temurâs illustrations as well as players from the U/R decks popular in so many of the Eternal formats. Jeskai also grabs a spot in this slot, with mountain monasteries being the perfect training ground for their monks and warriors. 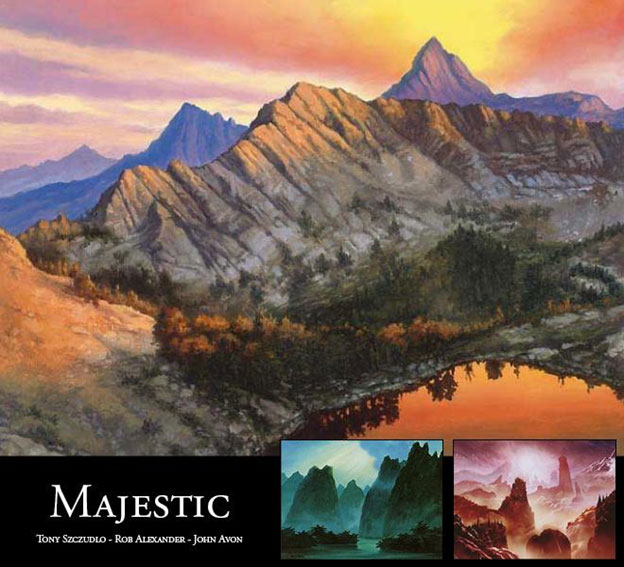 Letâs not forget, we are dealing with structures that are most likely the largest that the entire world has to offer.

Mountains from the majestic school emphasize the wow factor. Whereas other basics have to cheat in order to convey a sense of scale, mountains need to dial it back in order to fit, even reasonably, within the bounds of the card. In fact, one of the most prominent tricks of this particular trade is to illustrate only part of the mountain, letting the majority of the structure go far beyond the bounds of the border. This accomplishes the dual purpose of saving the painter time by not having to render the whole mountain while also pushing the sense of scale to its logical extreme. Thereâs a lot of atmospheric effects here, obscuring details and pushing the highest peaks far into the background. What weâre left with is nothing short of titans, mighty as ancient gods, standing above the pitiful offerings of the worldâunimpressed.

These mountains are perfect for Commander, a splash of the pretty in the middle of a different theme altogether. Itâs the visual glue that help hold a theme together, just enough to be easily recognized for its identity without being intrusive. They are also ideal for that most majestic of races red has to offer: Dragons. 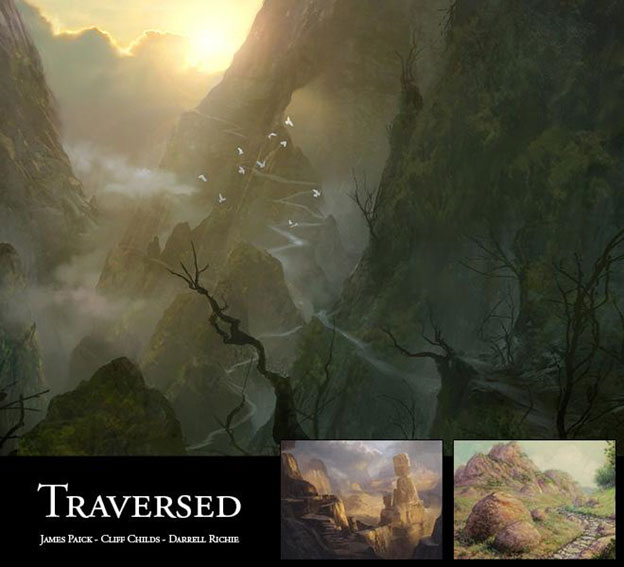 With mountains being so larger than life, itâs only fitting that some artists would drop in an anchor for those who wish safe passage. A human path serves the dual function of providing accessibility and scale. While trees can be somewhat unreliable, and the occasional bird does help bring a sense of proportion, the classic footpath gives the viewer a critical piece of information to help determine just how large or small of an area they are taking in. It provides an interesting narrative as well, the mountains in question serving as the home for some nomadic tribe, or perhaps a critical pathway between major civilizations. It is the path more traveled by, a major route that suggests the possible presence of others just behind that next boulder or over that next ridge. It builds a sense of adventure, a tale as it is being told.

This is a fantastic land set for those who view Magic itself as a journey: the flavor deck-builders, the vagabonds at heart. Tribal Nomadic players couldnât ask for a more appropriate suite of artworks. 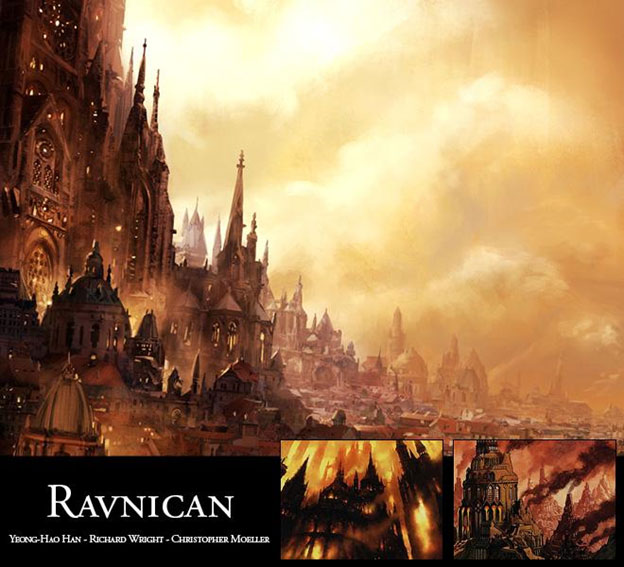 Ravnican mountains are the heavy-metal guitar solo of the Magic world. This is the heaviest industry imaginable, nothing but fire and steel as far as they eye can seeâand beyond. New Phyrexia, for all its grungy mechanisms, has nothing on this. Even the over-the-top illustrations of John Blanche for Warhammer 40k have a hard time keeping up with this. When youâre ready to start mass-producing fire and lightning, this is your go-to. Smog and smoke factor in heavily here, providing a hazy ambience to these pieces from this set, often a silhouette against the blazing skies. Contrast here is harsh, as the environment it represents, with the buildings rendered in jagged hues of red. This is the chest-thumping core of what man and machine has to offer.

This is a key set for Rakdos and everything the Lord of Riots represents: fire and chains to the max. Fans of Daretti, Scrap Savant will also find plenty of toys here for some Commander goodness.

Iâm including a couple âvirtualâ sets, where there isnât an exact visual link between card A and card B but the continuity is too strong to ignore. In addition, there are the classic panoramic sets with which you can build the mountain range of your dreams.

Mountains have a lot to offer any who follow the path of the crimson mage. When youâre ready to ignite your Planeswalker spark, and everything surrounding you, these are the lands that wonât steer you wrong.