Occasionally I learn a new word and can't wait to talk about it and this week is no exception. In a bout of what I think I knew all along was pointless background research on a character you get to know the gist of in the game's opening credits, I came across a new word. Ken Masters, which translates to "Fist Masters" in Japan, is described as the deuteragonist of Street Fighter - the second person below the protagonist. I never paid a ton of attention to the backstory of the characters, but most people recognize Ryu as the main character and Ken, originally just a re-skinned Ryu in Street Fighter 1, a game I have never played and have no intention of playing, as the sidekick. And what a side-kick it is - Ken's hurricane kick defies the laws of physics almost as much as Chun Li's Spinning Bird Kick. Ken was always my favorite of the two characters, even in much earlier iterations of Street Fighter 2 where they were essentially identical, so seeing that there was a word for how everyone sees Ken, and it's a weird one to boot, deuteragonist, made me take it personally. Ken is nobody's second fiddle, their second banana, their double dragon, their deuteragonist. Ken can light a person on fire with a single punch, he's good enough for me.

If I have a bit of a chip on my shoulder about this, it will only make me set out to prove that Ken is the superior combatant once and for all. It's not fair to settle this debate using the game because there is so much variation between different titles. The only fair way I see to do it is to settle this by seeing which Commander will be more fun to build. Ken's the clear winner here and it's not close.

Ryu requires a pretty significant investment in his activated ability -

and discarding a card for a chance you can draw a replacement card, provided you deal excess damage to a creature, something that I can't believe anyone thought was worth five mana and a card. Ken, on the other hand, benefits a ton from having the bigger power stat and can make great use of his ability to pay 0 mana to cast a spell, which is basically the opposite of discarding a card for the privilege of paying five mana to torch a creature. Ken has to attack, but so what? Ken is backed by a bevy of Instants and Sorceries, perfect for a new year where I am interested in being more deliberate about the Instants and Sorceries I play.

It's obvious at first glance that Ken's power, the determinant of how expensive a spell you can play for free, is the same casting cost (I'll say "cheugy" before I say mana value) as Relentless Assault, and you can certainly stop there if you're so inclined - plenty of people have. I, however, love the idea of casting spells for free and the only thing better than being a worse version of Narset is... well, everything is better than that in my view, but one particular thing that is better is casting bigger spells. What's an easy way to pump Ken's power?

I am not going to sit here and pretend that Sunforger Ken builds aren't obvious and basically the stock build, but a lot goes into how to build a Sunforger deck and Ken is the perfect time to re-evaluate what I think goes in a Sunforger package, which lets me spend a lot more time than normal thinking about Instants. Ken also only reduces the cost of Sorceries, so I need to carefully select that package, too. Building around Ken is the perfect opportunity to take a look at whether I'm playing outdated spell packages. If I can get a little bit ahead of myself, Ken with a Sunforger has 8 power, and you know what is 8 mana?

If you manage to cast an extra attack phase spell, you can cast this for free. That's a lot of work and you can also just cast Insurrection first and use Ken's ability to cast the extra attack phase spell with his ability, letting you untap with everyone's creatures. The point of casting it for free and sequencing your turn wrong is to LIVE THE DREAM of getting mana worth of value from Ken's ability. Insurrection is an awkward way to do it - I was going to have to find a better way to get value out of Ken. Then I remembered, I can still build around a Thesis Enchantment. In fact, I already figured out which one I want to use.

Invocation gets double duty from our free spells, which is an immense amount of value. To add more value to the proposition, I plan to play a lot of expensive spells that no one plays for a reason. It's obvious to cast Relentless Assault with Ken, but if we get Ken's power up to 8, something we can very easily accomplish with as little as 1 piece of equipment, what can we be casting?

I decided to ask Twitter and the responses were super solid and I got a few pretty good ideas, and I got one suggestion that made me start brewing a deck I wasn't going to build but sidetracked me for a couple of minutes. 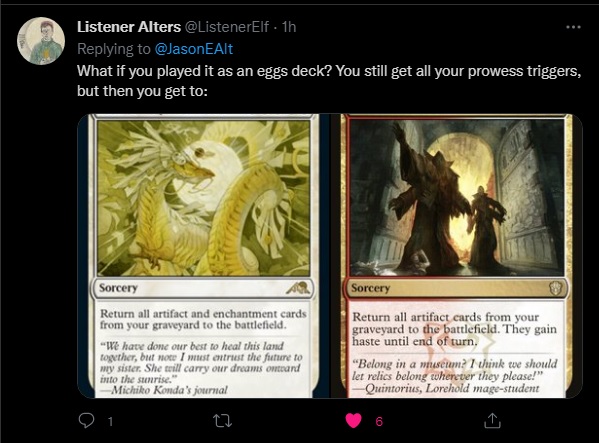 In all of the timelines where I don't abandon my current idea and run off to construct the perfect Ken, Master Artificer deck, I stuck to my original idea of just trying to cast very powerful spells. 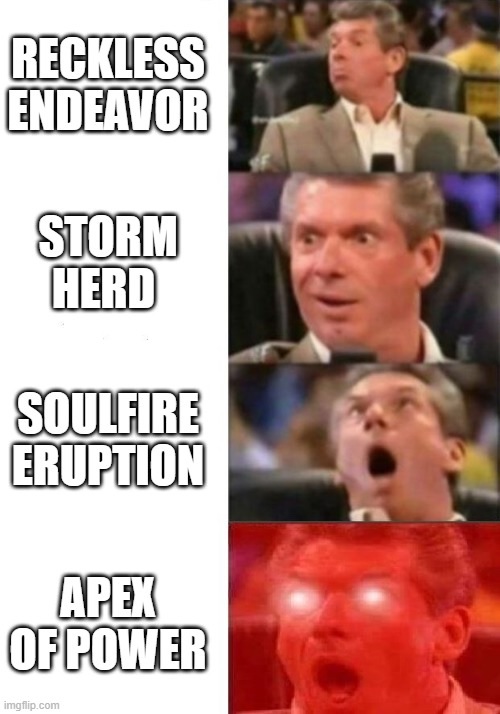 I want to make sure Ken hurts the opponent. Currently, Ken is fine being blocked, but I want to make sure if Ken gets blocked, he's doing work. I don't want Ken to eat chump blockers all day. Usually, the solution is something like Rogue's Passage and Whispersilk Cloak, but I like the idea of a more political solution. What if you can choose how they block? Besides jamming a Master Warcraft off of a Sunforger (something I still get people with in year of our lord 2k22), there is another card I want to try to make sure we kill the creature we want killed.

Laccolith Rig ensures that you kill a utility creature that would never block and ensures you can convince an opponent to block Ken without doing something like Maze of Ith to him. I'm not sure how useful or fun this will be, but if I am going to completely re-evaluate my life-long Instants and Sorceries policy, I should get a new Enchantment, as a treat.

The rest of the deck sort of builds itself - what is Sunbird's Invocation without Fiery Emancipation? How much room is left when you jam a bunch of extra turns spells? Is there a 75% spell you can cast with Ken (yes to that last one - it's called Illicit Auction and it's hilarious)

Throw a Shadowspear on Ken and you'll be able to outbid everyone. There are plenty of big, expensive Sorceries and I want to play as many as possible, which means keeping Ken's power high. I decided early on that if Ken plus a Sunforger was the way I wanted the deck to go, why not make it a Voltron deck? I realize that it sounds kind of trite that my thought process led me to basically the stock list, but I think what my build lacks in complete originality, it will more than make up for in playing ridiculous, huge spells that everyone has to read. So, what does this Ken deck look like?

This looks like a ton of fun, honestly. We're going to pump Ken's power, play big, huge spells and take lots of extra combat steps. This is a straightforward build but there are a lot of fun tricks in this deck. There is an issue, though - I deliberately pulled back a bit.

There is a possible build of this deck that could be fairly miserable to play against. Like Narset, there are versions of Ken that could cast a lot of very pernicious spells - Cataclysm, Raza's Purification - you could be the only one casting spells if no one has lands. I don't advocate that sort of build, but it's there. I think you might want to really cheat at that point - blow up all of their lands and hit them with Ken and Ilharg, maybe. It's a dirty way to play Magic that I don't advocate, but I can't pretend this isn't a great shell for it.