Let's be honest. If you've read this column for any amount of time, you knew who I was writing about this week. They printed a card that is designed to play exactly the way I build 75% decks and we barely need to do any preamble before the decklist. We could be in and out in under 3 minutes if you want. Are you only interested in the decklist, by the way? As always, feel free to scroll down. Thanks for taking the time to get my opinion on this commander - it's flattering when people take my opinion into account. However, if I might persuade you to stick with me through the preamble a bit, I am going to take a bit of a circuitous route to the decklist, much like someone navigating one of the new dungeon cards. You're going to take a little longer to get where you're going but you're going to end up with some... exp? Maybe you'll get a THAC0 from reading this article? I don't know what a THAC0 is, and at this point, I'm afraid to ask; but, if you are talking to someone older than like 35 about DnD and they clearly know way more than you, just mention THAC0 and they'll laugh and you can excuse yourself from the conversation before they figure out you spent all of the time they spent on DnD playing Magic instead. Let's venture into the dungeon, shall we? 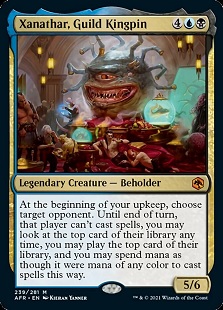 Xanathar has been compared a lot to Sen Triplets, and while I get that the effect on the upkeep is very similar and it's in similar colors, Xanathar didn't make me immediately think about Sen Triplets for inspiration. It was actually another deck I've been playing quite a bit lately that I thought of. Perhaps it's because, like I said, I've been playing the deck a lot lately, or perhaps because it's the Bluest non-Blue deck I've ever built, but seeing Xanathar and reading the abilities made me think of my Valki, God of Lies deck. It's been years since I saw anyone play Sen Triplets, but I have seen decks like Gyruda, Doom of Depths and Dragonlord Silumgar recently, and I think it might be tempting to look at one of those decks and use it as a template for building Xanathar. I think that's fine and I think I'll almost certainly do that myself, but I think I need to caution you (and me) against doing JUST that. You see, we're not going to build Xanathar much like we built Valki. However, playing Valki for months has taught me a few lessons about what we need to do with a deck like Xanathar that will help us build and save us a lot of headaches and revisions. I didn't think of Valki when I saw Xanathar because they're similar effects, I thought about Valki because people are going to react to you in a similar way, and you have to be aware of that going in.

There are cards that have that feeling that, regardless of how much they are actually going to impact the game, will make you the center of attention. Usually, these cards cost a lot of mana.

Unless the game has gone on far too long or you got REALLY lucky with accelerating your mana, paying seven mana to play a Herald of Leshrac is your turn. You're probably tapped out. Can you defend yourself against three people who are upset at you now? Even if you only take 1 or 2 lands before someone kills it and they get them back, they'll still gun for you after it's dealt with. A play like this is often viewed as a sign of aggression against the table. If there were already skirmishes, fine, but if this is the first shot fired in aggression, it's a resounding one and there will be social consequences. I'm not cautioning you against playing Herald of Leshrac in Xanathar, far from it. I'm windmilling a copy of Harry (as he likes to be called) into this pile and then dropping my $85 podcast mic on the ground right after. You know why Herald of Leshrac is better in this deck than in any deck I've ever played it before?

That's right, Xanathar decks run Paradox Haze. I mean, mine will. So, Haze is going to go into the deck because it's nutter butters with your commander and since Herald was in consideration before we decided to add a card that would double your cumulative upkeep triggers, it's a shoo-in now. I'm not here to tell you whether or not to play Herald of Leshrac in your deck - putting or not putting a copy of the card in the decklist does that and we've established you decided to read the body of the article before skipping ahead to dessert.

Learning how to play Herald of Leshrac mostly from a Red/Black deck has taught me how important accelerating your mana is. Valki likes to come down on turn two and scope out everyone's hand, and I usually try to assemble some mana quickly to be able to transform Valki. A lot of the time, though, Valki meets a violent end because someone or everyone wants back the card I purloined from them, understandably. This is fine, and a matter of course, but there's an issue when Valki heads back to the command zone and you think about playing out Tibalt - Tibalt is nine mana at that point. Nine mana to play a planeswalker, even one that will likely get boosted to 7 loyalty, is quite a commitment. Unless you wiped the board the turn earlier, something I hate doing, usually, Tibalt is very vulnerable and is a very juicy target.

Playing a nine-mana planeswalker as my commander has taught me to not just play a lot of mana rocks, more than you think you need, in a deck like Tibalt; It's taught me that this isn't even quite enough sometimes. Xanathar is going to need to be protected, which means leaving mana up most likely the turn you play him. Sometimes people will be cool and offer not to remove him if you promise to target someone else, a deal I will always take. It could just be the people I play with, but I think people would rather see something cool happen and it's better if it happens to someone else. If I let something bad happen to an opponent, that's one less bad thing I have to do to that particular opponent, even if it puts the person who did the bad thing slightly farther ahead. You're going to want to stick Xanathar and have the mana to protect him before you play something like Paradox Haze, in my experience.

Your sequencing is important, but I think getting a ton of mana rocks onto your side of the board matters, too. Not only are we going to run quite a few, I think we're going to need to make sure we can take their mana rocks. This slows them down and speeds us up, which is two things we need to do in one. Stealing mana rocks makes you somewhat unpopular, but so is sleeving up Xanathar. You're not going to escape notice, so let's escape with their mana rocks. I run quite a few ways to pilfer them in a lot of my Blue decks, but playing a lot of Valki has solidified the import of getting a lot of mana to play our big, stupid nine mana planeswalker.

It's MUCH more important to play Xanathar in this deck than it is to play Tibalt in the Valki deck - I have won plenty of games where I never cast Tibalt at all, and maybe cast Valki twice. If you look at this decklist I drafted for Gyruda, it's clear I didn't fully understand how to play with a mana-hungry commander that you were somewhat reliant on casting for your deck to work. The deck didn't just have a dearth of mana rocks that netted you colorless mana in excess of their Mana Value (e.g. running Mana Vault instead of Sky Diamond), it ran a lot of mana-hungry maindeck spells like Enslave and Stolen Identity. Thieving Amalgam rules, but it's tough, sometimes nigh impossible to keep resolving spells like that which require you to tap out if you're going to protect your annoying and crucial commander that will cost eight mana to replay if he dies. So, not only do we have to be careful with how and when we play cards like Herald of Leshrac (which we're playing, don't worry), we have to cut cards we like a lot such as Werxial, the Risen Deep and Diluvian Primordial. You don't need those cards - Xanathar IS all of those cards, provided you can stick him and keep him around. You play Xanathar and then run cards like Sphinx of the Second Sun to supercharge his abilities. Valki isn't a Dimir deck, but Valki taught me more about running a Dimir deck than brewing a million clunky Gyruda decks ever has. I'm going to fill the deck with ways to support and buff Xanathar and I'm going to include all of the cards I wish I could include in Valki but miss. Which cards do I mean?

I am going to spend the midgame attacking their mana rocks as aggressively as I can so that I can summon Xanathar, hopefully in the midgame, with counter backup. Casting Xanathar super late when they're already played all of their interesting stuff is pretty loose and they may have been able to wrap the game up before that.

Armed with a new understanding of what makes playing a deck like this difficult, what's essential, how to sequence my plays and how much to support what our commander is doing (as much as possible, I can't overstate how much fun this will be), I'm going to hit you with a decklist that's a lot less clunky than my Gyruda list to say the least.

The Average CMC of this deck is 3.1 versus 3.97 for the Gyruda deck. That lower CMC lets you play more stuff early to get set up for the midgame and lets you keep mana up for interaction without having to not play spells on your turn. It's obvious that cards like Diluvian Primordial would be good here, but focusing on having the best turn we can with our commander is better. We always have access to the commander, after all, and since we have the option to build around him, why wouldn't we? Changing our focus from running every sweet swiper card we can to maximizing the effectiveness of our commander means we won't have a commander that keeps dying and languishes in the command zone with a twelve mana price tag, and it means we won't get pantsed because we tapped out to play Stormtide Leviathan.

What do we think? Is a new plan for the midgame and a lower CMC enough to take decks like this from mana-hungry behemoths to sleek, murder machines? Did I leave out your favorite way to steal their mana rocks? Leave it for me in the comments section. That does it for me - until next time!