I typically put a little more thought into the pun for my title but as the years go by, it gets tougher and tougher to come up with a really good one every week. I feel like the Bob's Burgers writers room during a Season 10 production meeting. "I don't know... 50 ways to leave your Guava?" (that's an actual one from the show, and they did that in Season 3). I don't typically like for the title to tell you exactly about whom I'm writing, but I still deceived you all a bit because this is actually a two-fer article - a non-hidden (Prosper, obviously) and a hidden (something else) commander that does a ton of work in the Prosper deck but which can have a satisfying and powerful (and novel) deck built around it. I'm killing two birds with one stone just like you'll be... killing three opponents... with one deck (nailed it).

Prosper is a monster, and is so powerful there is almost no space for me to innovate. I'd like to a bit, obviously, otherwise what are we doing here, but I want to stress that Prosper demands to be built with a lot of cards that are slam dunks and which I can't easily justify excluding to make room for pet cards. What I think I will do, however, is focus on building around our hidden commander, a commander I prefer to keep hidden for now.

We can't trivially play cards from Exile, which means we need to get a bit creative. Luckily, there are plenty of ways to do it. The obvious advantage is that Prosper rewards us for doing so with shiny treasure. The downside is that the deck is basically built already. It gets worse. The stock list is basically exactly how I would build it. "The 75% approach to this deck, uhhhh, might be juuuuuuust a little bit different from the stock list" I say confidently before reading through the stock list. "Not everyone is going to recognize the opportunity to play with Etali, Primal Storm and Stolen Strategy," I further explain, seconds away from looking at what everyone else is playing and having my dreams crushed. Don't tell fictional Jason that other people have figured out that playing with other people's cards is good and that you can type "from exile" into Scryfall. Let him live in the fantasy world where WotC designed another Red-Black commander seemingly just for him and everyone else didn't automatically realize they should build it the same way he did.

This is the average list from EDHREC and it's not too far off of how I'd build it. You maximize the amount of their cards you get to play a lot like I did in my Valki deck which I still play a lot on webcam because I love it. A Rakdos deck is my Bluest deck, who'd have thunk it? Valki is like a good version of Inniaz that wins games which bums me out a bit as a purist but thrills me to no end as a builder. Also, I'm not really a purist so who cares? Friendship ended with not Rakdos, Rakdos is my Blue deck now or whatever.

The average list on EDHREC leaves something fairly important out, however, and it's a card that I see a ton of Prosper lists running. No, it's not Uba Mask. I mean, Uba Mask absolutely belongs in the deck and it deserves a half a paragraph where I point the card out in case anyone hasn't read it. It's not NOT Uba Mask, but it's also one of the more powerful uncommons we have in a set where they literally gave us an uncommon card that is 95% similar to Thrasios. I don't see a reason why a Prosper deck would exclude this card, and I see ample reason why it has enough gravity to wrap the rest of the deck around it. That card? 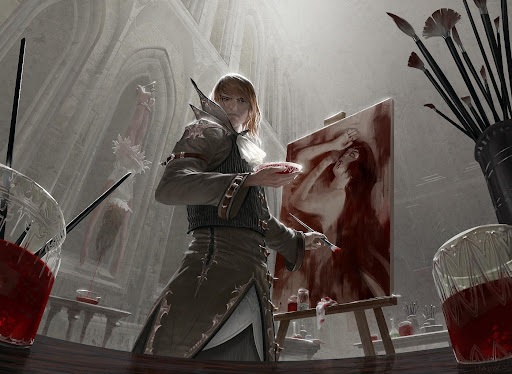 Wait! No! Sorry, I got confused. I want to talk about a blood artist, not the Blood Artist. Also, I think the card I want to talk about is a Human and is probably legit using paint, but she dresses like a Vampire? Kind of? Look, I'm not making fun of her wardrobe, I bought basically an identical outfit to wear to Renaissance Faires and if you think it's embarrassing to admit I bought a puffy pirate shirt to go eat a turkey leg in the hot July sun, realize I'm actually admitting I spent $100 on a big, stupid Scarlet Pimpernel looking hat with a big dumb feather and then I didn't go to Ren Faires. I haven't been to one in like a decade and I don't even know why. I don't even not like them, AND I have some blousey wool pants that look cool with the boots I bought but are liable to cause heat stroke if worn for more than 20 continuous minutes.

I say he never left, but people took one look at Dauthi Voidwalker and asked themselves why they would ever trifle with Snow-Covered lands. I get it. But also, it costs you barely anything to just jam the stupid Snow-Covered lands into the deck and while you're at it, use some Treasure tokens when you don't have enough.

If we tweak the Prosper deck to... flourish (I almost said prosper) when Kalain is lain on the plane, what would it look like? Very similar, I'm betting, but with more payoffs for using treasure to cast their spells. I am realizing I didn't link my Valki deck earlier, so I'll do that now so you can refresh your memory before I hit you with a third decklist in an article that promises a fourth and threatens a fifth. Am I doing more than merely adding Kalain and Hedonist's Trove to the deck? I'm barely affronted that I would pretend that you would ask me that because while I'm gonna, I scarcely need to. This deck was made for Kalain to be in the mix.

The deck likely needs tuning, and it's not THAT far off from the stock list, but if you had locked me in a room with no access to sites with lists of other people's decks, I am confident this is what I would have come up with. There's too much evidence to suggest this is how I build. Look at my Valki list if you have any doubts. There is a little more to be done to maximize the impact of Kalain in this deck, but, given you won't reliably get Kalain, I didn't go too deep.

That is to say, I didn't go too deep in THIS list. However, a deck with Kalain at the helm is quite a different story, and it's one I'll tell where Kalain is the hero. You know what card really rules in a Kalain deck and is pretty OK in Prosper? Oh, just one of my favorite cards of all time.

When I started looking at Kalain, I began to think about how much fun it would be to reliably get Academy Manufactor in play. I considered tutoring for it and then I realized I was thinking too small and I should be tutoring for the best card in my deck at the time. How do I like to do that? By doing dumb, artifact shenanigans, something I have done in Rakdos way more than in any other color combination. Chainer, Kroxa, Extus, Plarrg and probably more I forgot. Also, so many commanders have come out in the last year, that you forgot Plarrg was Boros rather than Rakdos. I love a deck that runs both Darettis, sue me.

Why are we bothering? Basically, we want to make the most out of doing dumb stuff with Treasure tokens, power up smaller goblins with +1/+1 counters when we cast them with Treasure tokens and get incidental value from cards like Furnace Celebration. Building a Rakdos Goblin Artifact deck around Kalain isn't just predictable, it's my duty.

The Goblin-based artifact decks I have brewed in the past aren't the best starting point for a deck like this since I have to pare so much back, but adding Treasure cards is a huge advantage. When it's trivial to generate a lot of treasure, suddenly artifacts are even more expendable. Brass's Bounty doubles your mana with Krark-Clan Ironworks out. Activating Kuldotha Forgemaster is trivial. Treasures in our artifact deck aren't a sub-or separate strategy at all, they're a synergistic effect and I can't wait to win a game with Revel in Riches, as Pashalik Mons intended.

Let's look at how I would build with Kalain as the main focus rather than a minor play in Prosper's court of assorted side characters.

This is my first draft. With lots of ways to find Cloudstone Curio, I decided that instead of middling spells that created a treasure and didn't do much else such as Sudden Breakthrough, we should use the Curio to re-buy creatures that created them on ETB to get the triggers more reliably. You can add more ETB Goblins if you want, or add more sac outlets and a creature like Squee. This deck is fairly customizable.

There are still some really clunky creatures in here that are only in here for treasure synergy that I'd like to phase out when I can find something better, but for now, I am happy with this build. Ironically, Prosper is exactly how I build Rakdos decks but I feel like Kalain is more fun just because it's so off-meta. Both decks are powerful and Kalain has the added benefit of doing work in the Prosper shell.

That does it for me this week. Join me next week for more shenanigans. Until next time!