I am very excited today because I get to come to you a day early and bring you something very exciting - Wizards has given CoolstuffInc.com a free preview card from Commander 2019 and CoolstuffInc.com has, in turn, selected me to be the one to do the previewing. I am equal to the challenge and the card itself is solid. Not only that, chewing on the card for a few days while a few more cards from Commander 2019 were revealed at GenCon gave me a few ideas for the card in question that may seem a bit unorthodox at first. I'm honestly impressed you're still reading if you're just here to see the card - if so, let's slap an image of it up early so you can call it a day. Thanks for clicking on the link and enjoy the rest of preview season - and by "the rest" I mean "previews for the new Brawl set will begin immediately after the last Commander 2019 card is revealed." Never a dull moment in content creation. Anyway, here's Selesnya Eulogist! 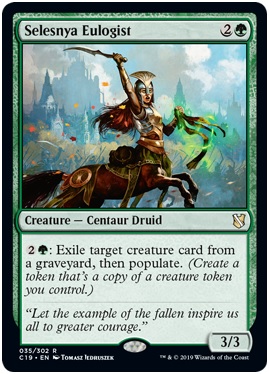 The card is not splashy, but it reminds me quite a bit of another card previewed in a Commander deck that didn't seem all that splashy at first - Scavenging Ooze. Is this card Scavenging Ooze? Well, no. A lot of the initial hype about Scooze was that it was 2011 and you could still play New Horizons and Maverick in Legacy. Also, it was 2011 and you could still play Legacy. Scoozey didn't seem flashy at first blush but soon people were buying Counterpunch decks just to harvest the delicious ooze meat inside. Is Eulogist that good? No, but a lot of that has to do with 2 factors. The first is that Eulogist costs more to play and activate. Eulogist is far too slow for a quick format like Legacy. The other reason is that Eulogist requires more setup to take advantage. However, if we put the work into that setup, Eulogist is going to do some work for us, and I'm really excited to play with this card. What do we know about the deck it comes in?

Almost nothing! We do, however, know the colors.

Ghired was revealed at GenCon over the weekend, and while it certainly looks powerful and the deck is liable to contain some big, fat creatures, I want to make a somewhat controversial move and suggest we pretend Eulogist is this year's Scavenging Ooze and bust open that deck, take Eulogist out and throw the rest away.

That's a bit of an exaggeration - there are likely to be cards in the deck that we want to keep, but I almost assuredly want to pair Eulogist with a Bant deck. There are far too many cards in Blue that do what we want and Ghired is a little too fair if you ask me. Before I talk about the Blue cards and show you my Bant deck, though, I want to talk about one advantage to leaving the Ghired deck as-is, and that advantage addresses a shortcoming of the Populate mechanic.

Is Populating going to be worth it in the Ghired deck? Possibly! Populating with the tokens Selesnya gives you, 1/1 squirrels, 1/1 soldiers, 2/2 knights, 1/1 saprolings - who has time? But making a token that's a copy of Wurmcoil Engine or Autochthon Wurm? Now we're cooking with gas. One reason to give Red a second look is that Red has some very aggressive creatures but it also has lots of ways to make non-token creatures into tokens, and that's the one reason I'd consider leaving the Ghired deck together and using Eulogist to crank out tokens. Cards like Kiki-Jiki, Mirror Breaker, Flameshadow Conjuring, and Mirror Match make creatures you control that aren't tokens suddenly eligible for population. That's a powerful thing and something Selesnya populate decks struggled with. I imagine some number of those cards or similar cards will feature in the Ghired deck when it's fully revealed. However, I still feel Blue is our best bet and I'll tell you why I think the deck should be Bant.

Ghired has to attack to use his ability which I think is sort of unfortunate. It also forces the token to attack so you can't easily make copies of utility creatures. Sure, you can get some mileage out of Acidic Slime or Eternal Witness but if you're going to do the work to make something into a token, you should be able to stack its ability and not have to squander it in a sometimes fruitless attack. I don't think it particularly matters who your commander is in Bant, you're going to have better cards in the deck to pair with specifically Selesnya Eulogist and more generally with Populate. Red gives you Flameshadow Conjuring but Blue gives you Rite of Replication, Quasiduplicate, Saheeli's Artistry, and the list goes on. If you have a particularly good artifact, Masterful Replication can be great before you populate a ton. Most importantly, in a 75% deck, I want to steal their creatures and Blue lets me do that way better than Red.

Consider spells like Clone Legion. You create an army identical to theirs and are suddenly free to populate copies of their best creatures at will. Populating a token created with Faerie Artisans allows you to keep it when Artisans "resets" when a new creature comes in. You can even cheat expensive cards into play with Arcane Artisan and make some copies you can keep if something happens to Artisan. The Blue clearly makes the populate mechanic better because you have better targets by virtue of Blue having the easiest time turning creatures into tokens, but I submit that Blue makes the rest of the deck better. With Clone Legion, Zndrsplt's Judgment, Followed Footsteps, and Expropriate, things could get very mana-hungry, but that's why we're pairing with Green, isn't it? No, it's not, we're pairing with Green because we're building around a Green card, but we'd pair with Green even if we didn't have to.

Activating Eulogist is slow and expensive because it should be. However, Training Grounds and Biomancer's Familiar can make things a lot less expensive and turn Eulogist into a lean, Green, graveyard-tilling machine that pulls a Karador deck's pants down while churning out an army of clones that would make those creepy tall aliens on Kamino envious. Training Grounds wouldn't be wasted in the deck because we could play cards like Vitu-Ghazi Guildmage to help Populate often.

A lot of mana ramp, some utility creatures, ways to make tokens and steal their stuff and maybe some card draw and you've got yourself a recipe for a 75% deck that's going to steal a lot of their creatures but won't be reliant on them to play creatures since you'll have a lot of your own. Helm of the Host and Blade of Selves will make sure you get a ton of value from your creatures and if you manage to start populating a token that's a Wood Elves or a Man-o'-War, so be it. We haven't mentioned why we're playing White very much, but with Scion of Vitu-Ghazi, Growing Ranks, Trostani, Rootbound Defenses, Sundering Growth and Vitu-Ghazi Guildmage, you'll want White. It really isn't that much of a sacrifice to add another color with all of the mana we'll be generating.

What would a Bant-colored deck built to maximize the impact of Selesnya Eulogist look like? Also, how many cards in the Ghired deck will be perfect for this deck but I won't add them because I don't know they exist yet? Let's answer the first question, at least.

This is pretty rough, but I like what it does. We will be using spells to make copies of their creatures that are tokens, then populating as much as we can. Also, we can make our own creatures into tokens and populate those as well. Rubinia Soulsinger can steal creatures in a pinch, and our Training Grounds/Heartstone/Biomancer's Familiar strat is great with Memnarch. Ambassador Laquatas makes sure their yard is going to be full of creatures to mulch into populate tokens and I managed to include Intruder Alarm and a lot of mana creatures to really churn out activations.

Mimic Vat is a card that we can be using to steal their creatures in basically every deck and I don't know why people (including me) don't play it more. Mimic Vat is a very 75% card. It exiles a creature on its way to the yard which can interrupt opponent's graveyard strats and it steals the creature's identity and lets you print copies. Feel free to populate them. Mimic Vat can change targets and it can go in any deck. It's a card I am going to endeavor to use more just because it's so fun and versatile and it's a very 75% card. I couldn't not include it in this deck!

Selesnya Eulogist isn't our commander, but it synergizes very well with the deck we built - probably better than with the deck it comes in (provided Ghired is the primary commander - we won't know that until... you know... after the article was written but before it comes out) and it actually enables some real 75% fun. Making a copy of their creature and then making way more copies than they do, all the while stripping their graveyard of cards they could bring back is what I want to be doing in a 75% deck and this particular deck is really exciting to me. If you don't like Rubinia, I very nearly made the deck a partner deck - Thrasios works very well with Training Grounds and Biomancer's Familiar so those cards will never be dead draws with Thrasios in your command zone, and I'd combine Thrasios with Ishai - Coolstuff Inc's Commander 2016 preview card. Thrasios is a fantastic card and you would not be disappointed if you had it helm this deck.

What do you think? Would you pair Eulogist with Red? Don't think we have enough token payoff? Got some minor tweaks? Does my list had 99 or 101 cards? Leave me something in the comments section. I'll be back next week with a look at the entire set and which cards work in a 75% context. Until next time!