And there we have it, after almost a decade out of the spotlight, New Phyrexia has returned to Magic's story. First appearing in 1994's Antiquities, Phyrexia is Magic's oldest recurring antagonist, rivaling Nicol Bolas (by just three months, in Legends). While Bolas has hogged the spotlight for the second half of Magic's life, Phyrexia was its first obsession. After Bolas was dealt with in a multi-year arc culminating in War of the Spark, Magic took a bit of a break from sequential storytelling to introduce some new characters and return some old ones.

The planeswalkers most concerned about New Phyrexia assumed them trapped on their single plane, but the appearance of Vorinclex, Monstrous Raider has cast all of that into doubt. New Phyrexia has begun to enact plans beyond the confines of their home plane, but it's been so long since we've seen New Phyrexia, we have a massive number of people who may not know who or what Phyrexia is at all.

If that sounds like you, or you just feel like you could use a refresher, this is your article.

The Origins of Phyrexia 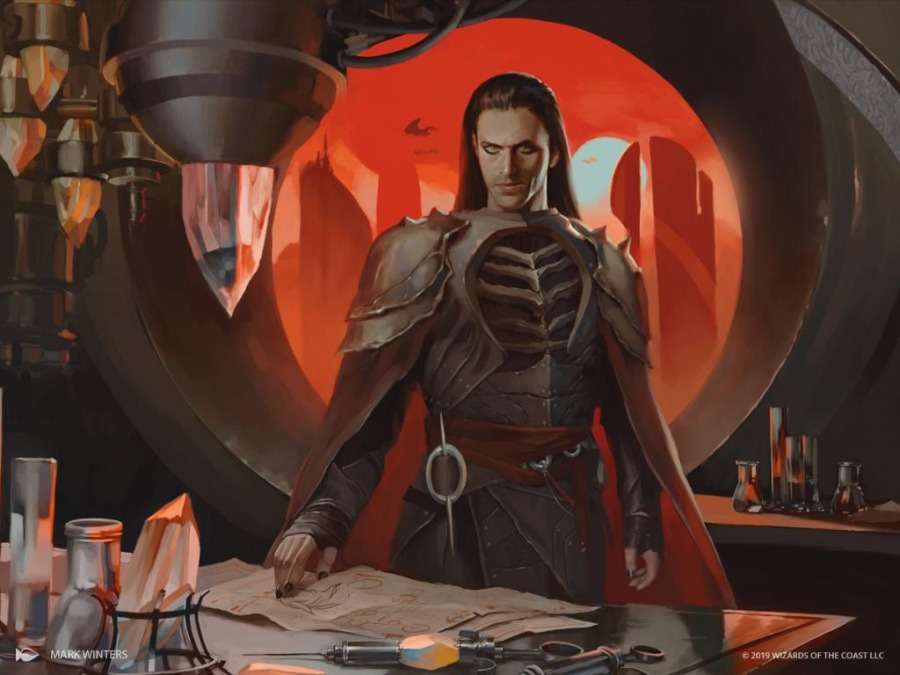 Glacian, Powerstone Engineer becomes ill with the wasting disease Phthisis after being stabbed with a powerstone shard by the Thran rebel Gix. Glacian's wife, Rebbec, Architect of Ascension, calls in the exiled Yawgmoth, Thran Physician to heal him.

Spoiler Alert - He doesn't. Instead, he slowly usurps power over the Thran empire while experimenting on Glacian. When the planeswalker Dyfed arrives, Yawgmoth convinces her to find a plane suitable for the ascension of the Thran. Dyfed finds the metallic paradise Yawgmoth dubs Phyrexia. Yawgmoth brings his followers there and begins mutating them using Glistening Oil. When an army of Dominarians turn on Yawgmoth, he destroys the Thran capital and flees with the survivors through the portal to Phyrexia. Rebbec seals the gateway behind him, using two halves of a powerstone containing her husband's life force. 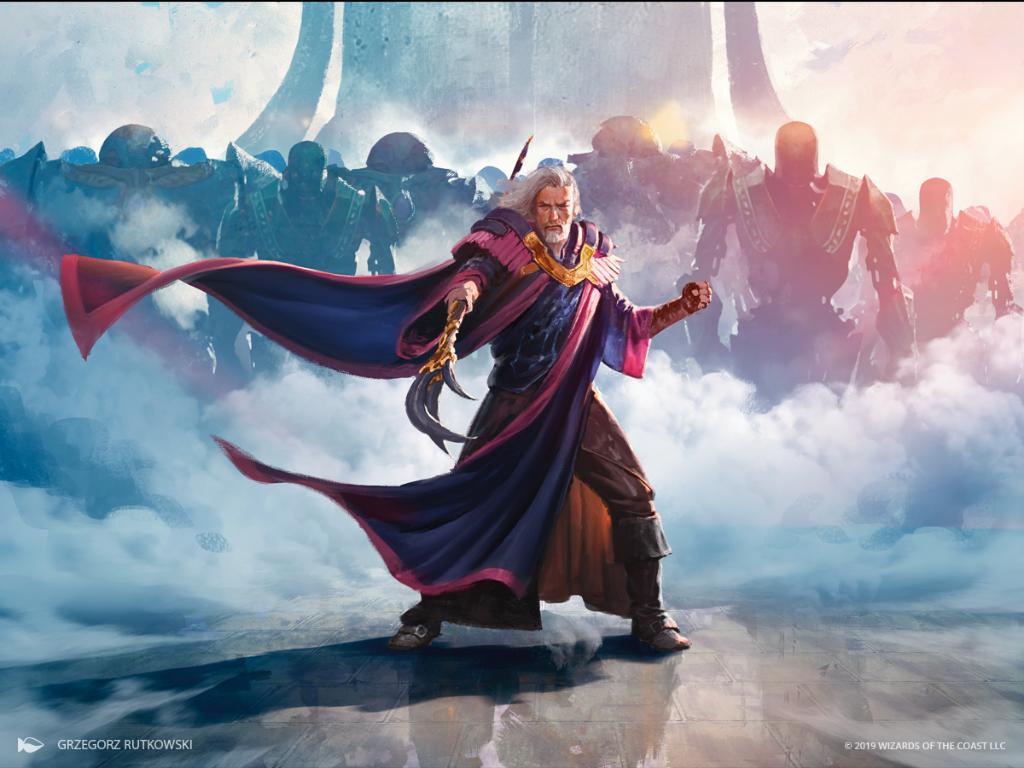 Thousands of years later, a young Urza, Lord High Artificer and his brother Mishra, Artificer Prodigy discover the twin powerstones. Their sibling rivalry turns bitter, and escalates into war as they're drawn into a larger political conflict. This conflict is manipulated by Gix, now a Yawgmoth Demon working to set the groundwork for Phyrexia's return to Dominaria. The conflict eventually leads to the island of Argoth, the last wealth of natural resources left on the continent. There, Urza and Mishra's final battle culminates in the revelation that Mishra has been corrupted by Phyrexia and is no longer human. Gix arrives and seizes control of the artifacts on both sides, and Urza is forced to detonate the Golgothian Sylex to stop him. 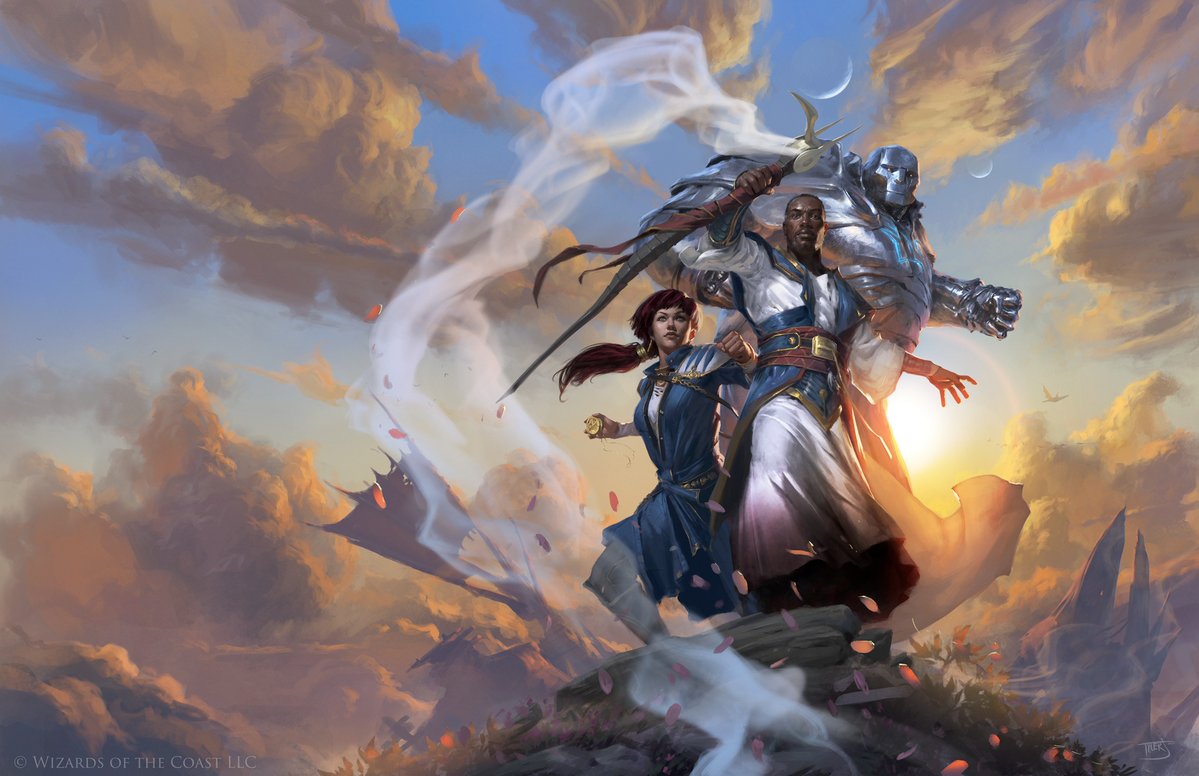 Urza meets the Phyrexian newt Xantcha, Sleeper Agent, who helps him regain his sanity. Together, they defeat Gix, but Xantcha is killed in the process. After millennia spent fighting a fruitless one-planeswalker war against Phyrexia, Urza meets Barrin, Tolarian Archmage and they create the Tolarian Academy together. Their star students are Jhoira of the Ghitu and Teferi, Mage of Zhalfir. Urza creates Karn, Silver Golem as part of time travel experiments, but things go badly and time is shattered on Tolaria, affecting Teferi, Jhoira, and Karn deeply. You can read more about this era in Karn, Scion of Urza and The Life of Teferi. Urza's efforts at Tolaria eventually result in his long-shot plan for defeating Phyrexia, a collection of artifacts called the Legacy. When combined, they have the power to destroy Phyrexia. 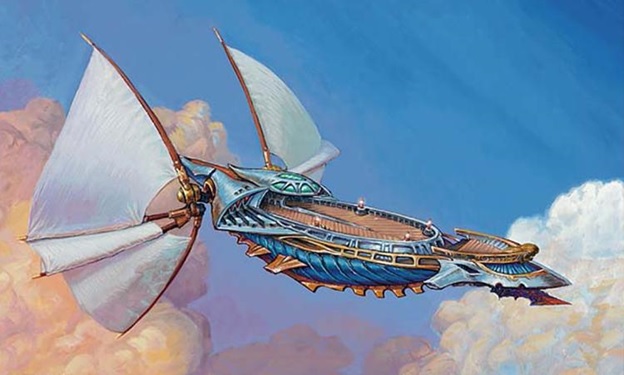 Instead of writing this one out, check out the video I wrote the script for instead.

Too Long; Didn't Watch version: the Legacy Weapon kills Yawgmoth, known as the Father of Machines to the Phyrexians, and Phyrexia is destroyed. Karn ascends as a planeswalker in the blast, but carries the infectious phyrexian oil within him. 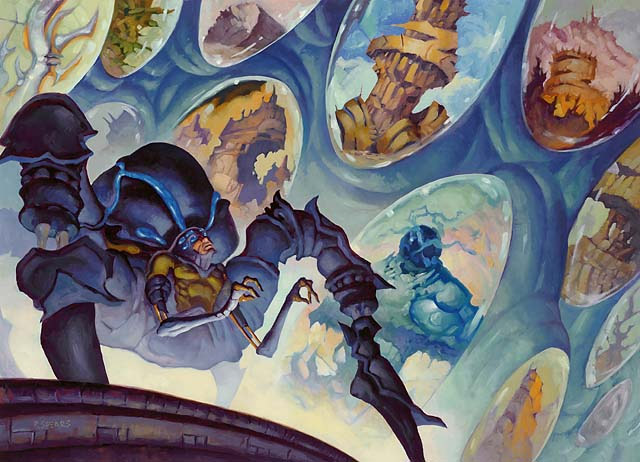 Eyes of the Watcher by Ron Spears

Source: The Moons of Mirrodin, The Darksteel Eye, The Fifth Dawn

Karn creates the metal world of Mirrodin, but accidentally infects it with the glistening oil. The guardian of the plane, Memnarch, kidnaps beings from across the multiverse in search of a planeswalker spark. He sets his sights on Glissa Sunseeker's spark, but she and her allies, including Slobad, Goblin Tinkerer and Geth, Lord of the Vault, defeat the mad guardian. The three surviving heroes are separated, and Geth willingly joins the New Phyrexians hidden in the core while Glissa is corrupted by them unwillingly. 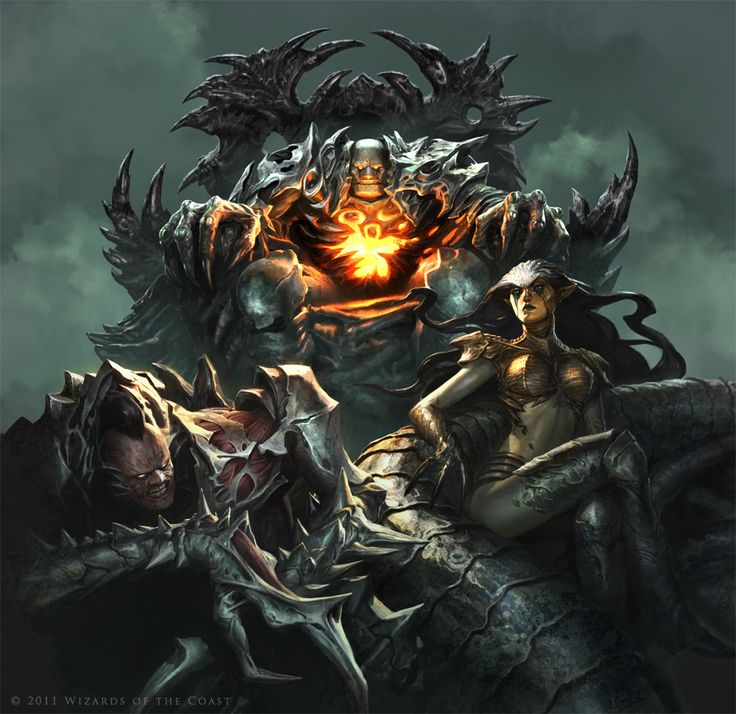 When: From about 60 years ago until Now

In response to a growing threat on Dominaria, Karn sacrifices his spark to seal a time rift over Tolaria. Sensing something is wrong as the glistening oil begins to corrupt him as well, he flings himself to Mirrodin with the last vestiges of his power. He's captured by the New Phyrexians and made their new Father of Machines. Decades later, they emerge as five distinct factions from Mirrodin's core, and conquer the plane. Koth of the Hammer, Elspeth Tirel, and Venser, the Sojourner attempt to stop them, but quickly realize they're in over their heads. Tezzeret, Agent of Bolas infiltrates New Phyrexia, and gives the heroes Melira, Sylvok Outcast, a young woman immune to Phyrexian corruption. Melira is able to cure others of Phyrexian corruption, so long as it hasn't progressed too far, and confers this immunity on Koth, Elspeth, and Venser. The trio only manage to free and cure Karn through Venser sacrificing his life to give Karn his spark and immunity.

Some time later, Karn and Elspeth both leave the plane, as does Tezzeret, leaving Koth the sole planeswalker fighting for Mirrodin's freedom. Karn digs up the Sylex, intending to use it as a weapon against New Phyrexia, but the War of the Spark delays him. We last see a group of planeswalkers intending to gather on Dominaria and discuss what to do about New Phyrexia.

Whatever they decided, New Phyrexia isn't sitting around to wait for them. The praetor Vorinclex, Monstrous Raider has come to Kaldheim by unknown means and taken something from the Tyrite Sanctum. Oh no! With New Phyrexia loose in the multiverse, nowhere is safe.

Getting to Know New Phyrexia

Finally, for those of you who want to learn more about New Phyrexia, the following Worldbuilding Articles were released around Scars of Mirrodin block and go into all the juicy detail you need to know.

I'm going to be fairly irregular for the foreseeable future, and you'll see me again around set releases for flavor gems and backstory!