Welcome back, aspiring time mages! Magic 2021 features the infamous planeswalker and temporal manipulator Teferi (just the one name, like Prince or Cher). Born almost 1,270 years ago in 3293 AR (that's Argivian Reckoning, or years after the Birth of Urza), Teferi has been a big name for Magic almost as long as Magic has had a story. While his story is a bit all over the place (he was only retroactively associated with Tolaria), I think the Time Mage would appreciate a strict chronology of events. Note that if you want to get a little more detail on these older events without reading whole novels, you can always check out my index of story summaries. 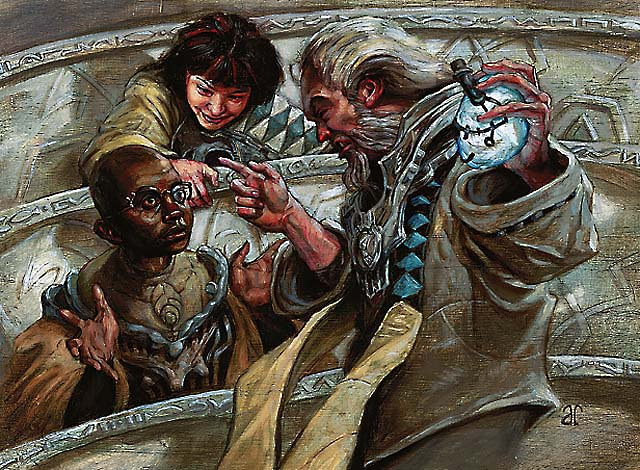 Young Teferi was a rascal. Shown here being admonished by [Barrin, Master Wizard].

Teferi started life as a Disruptive Student, recruited at a young age for the prestigious Tolarian Academy. The Academy only took children at the time, because Phyrexian Sleeper Agents couldn't imitate children. This also ensured that Barrin and Urza could mold the students from a young age for the Academy's true purpose: to be the backbone of Urza's cold war against Phyrexia. Teferi was a prodigy, although he generally turned his genius to pranks like inventing fart devices. At 14-years-old, he had a crush on fellow student Jhoira of the Ghitu and annoyed her to no end. When Urza built Karn, Silver Golem as a time travel probe, Teferi came up with the cruel (and juvenile) nickname "Arty Shovelhead" for the golem.

Then tragedy struck when in 3307 AR, a Phyrexian Sleeper Agent managed to infiltrate the island, preying on Jhoira's loneliness. Jhoira was killed in the Phyrexian incursion that followed, and in grief for his only friend, Karn used Urza's time travel machine to go back in time and rescue her. The device wasn't able to handle the strain, and exploded, causing a far greater catastrophe on Tolaria with Karn's Temporal Sundering. The island was plagued by temporal anomalies. Teferi's robe caught fire in the initial explosion, and he was caught in a bubble of slow time for decades, the fire slowly spreading as Jhoira tried to figure out a way to free him. 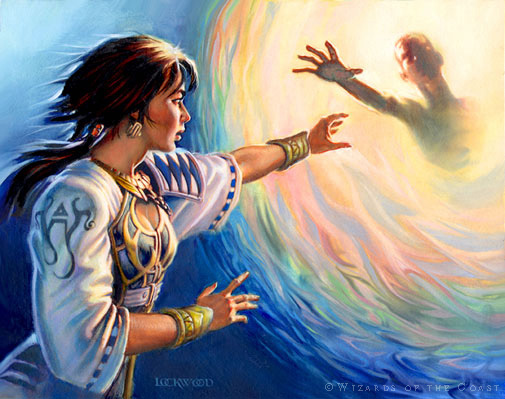 The solution came in 3330 AR, when Karn and Jhoira devised a method of safely crossing the temporal barriers. The water flowing from the "slow time" and "fast time" bubbles retained temporal properties, and applying the steam from such water could create a passable bridge. Teferi was saved, but found himself in a world where decades had passed him by. While he was still physically and mentally fourteen, his peers were already adults.

Teferi quickly felt alienated by his experience. He stayed with the Academy for years, discovering the secrets of the mana rig alongside Jhoira and Karn in 3346. Urza's callous use of his students and those who rely on him, like selling Karn to the Viashino who controlled the Mana Rig for access, left a bad taste in the young wizard's mouth. His experience at the mana rig brought out previously unseen leadership qualities in Teferi, and when his homeland called him to service, Teferi answered.

When we meet Teferi again, he has brought peace to his nation... sort of. What happened next is a bit garbled, as lore around Mirage has been distorted by an unofficial lore website from the 90's that was held as canon for years (for more, check out Multiverse In Review's articles on Mirage).

Here is what we know for certain. Teferi did bring peace to the conflict afflicting Zhalfir, his home on Jamuraa. A short time later, Jhoira arrived aboard the skyship Weatherlight to deliver refugees from Serra's Realm. Teferi awkwardly proposes, having missed Jhoira's companionship, but she declines. Sometime after this he discovers he is a planeswalker, and we learn from the backstory of Mirage that Teferi establishes five Guilds of Magic, each aligned with a single color. His attention to Zhalfir wanes, however, and he began experimenting on his island retreat. Something goes horribly wrong, however, and he phases Teferi's Isle out of existence. 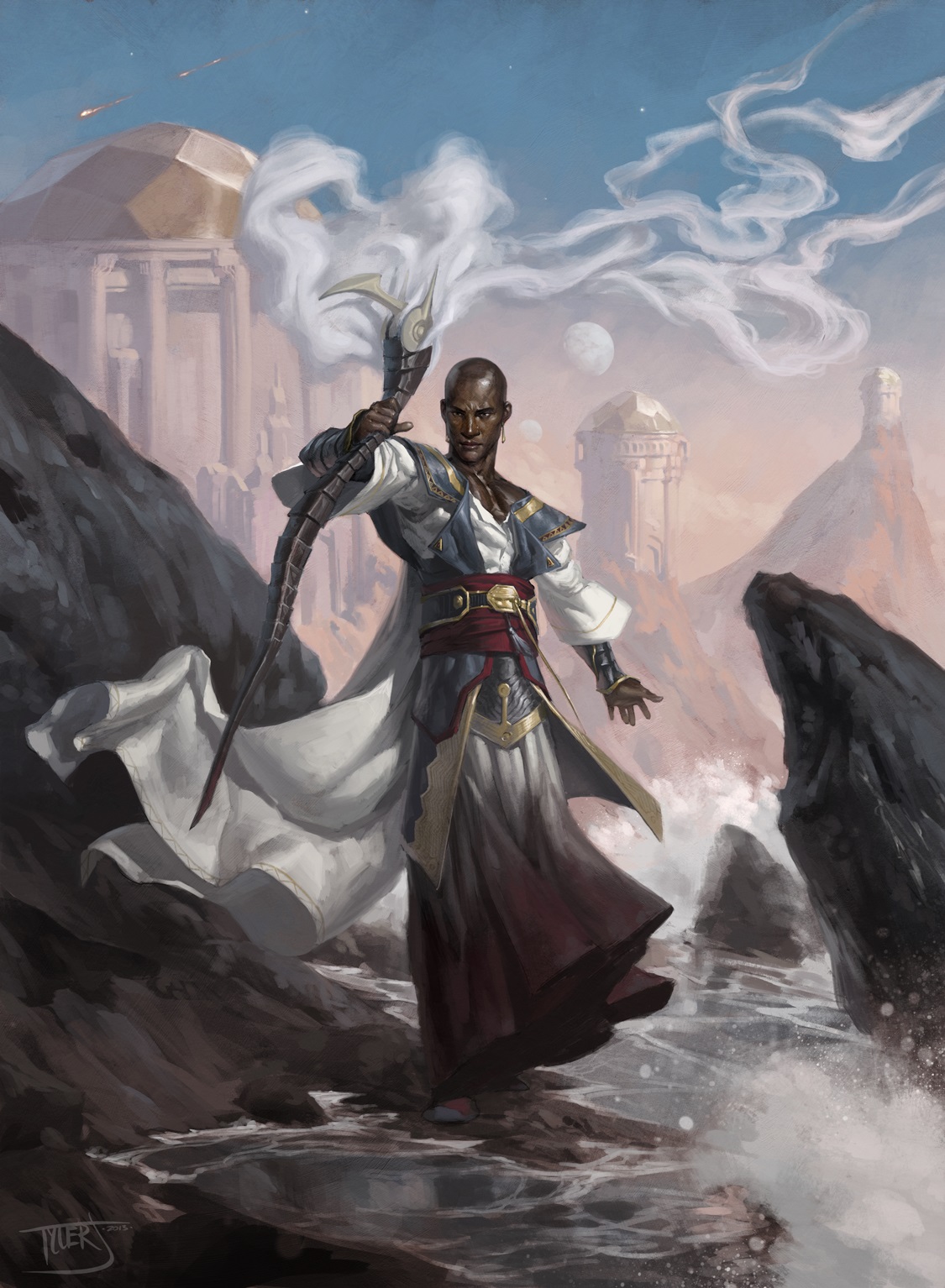 Teferi depicted on his isle, at the height of his power.

Teferi is absent for the majority of the Mirage War. The short version of the war is that 3 powerful mages, Mangara of Corondor, Kaervek the Merciless, and Jolrael, Empress of Beasts sense the powerful magic unleashed, and go to the island to investigate. They form a tentative truce between them, one that is later broken by Kaervek, who sought to conquer Jamuraa. Kaervek tricks Jolrael into helping him imprison Mangara in an Amber Prison, and so Kaervek's invasion began.

Teferi returned around 4196 AR, but the damage he caused phasing out his island had to be repaired or risk disastrous consequences (more on those later!) - so when Jolrael came to him and admitted her part in the war, Teferi could not intervene. Instead, he sent visions across the continent to heroes and leaders, guiding them to end the war. Not long after, he journeys to Mangara's home of Corondor, only to find himself embroiled in the Planeswalker War. The exact details of the Planeswalker War are unknown, we only know that many of the survivors went on to battle the Phyrexian Invasion a decade later.

Back in his role as Royal Mage of Zhalfir, Teferi led his people against a Keldon invasion. The Keldons, a warrior people from across the sea, have established a colony on Jamuraa under Latulla, Keldon Overseer and her suspicious minion Greel, Mind Raker. They believe that their prophesied end of days, called Twilight, approaches. The Tolarian Academy sends aid against the Keldon onslaught, but only a token force, which Teferi takes as a slight. When Teferi's forces strike the blow that sends the Keldons into retreat, he notices that mysterious illnesses and corruptions have been cropping up in the Keldon's wake. Knowing the Phyrexian Invasion is imminent, he vows to protect his people - even against Urza.

"I will guard my lands and the people who look to me, but I will never follow Urza. I will make my own way." 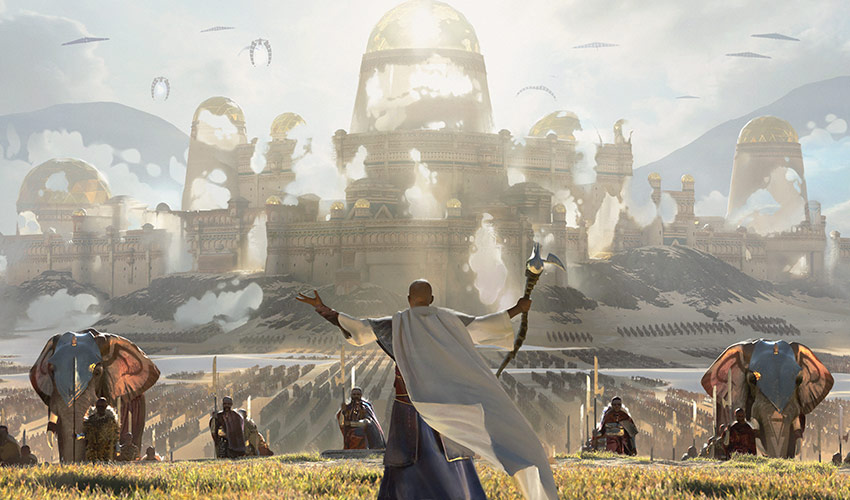 The pivotal event in Teferi's life came during the first wave of the Phyrexian Invasion. Leading Urza to believe he was still the older planeswalker's ally, he helped Urza seal the Phyrexian portals spewing onto Jamuraa... only to harness the energy for the awesome spell he was about to unleash. Rather than allow Zhalfir to be a piece in Urza's game against Phyrexia, Teferi forged his own path. Using the magic that once caused catastrophe on his isle, he phased out Zhalfir, leaving a void in its place and intending to return in a century, long after the Phyrexian threat was extinguished. His closest friend, Jhoira, had also grown weary of Urza, and they phased out her homeland in Shiv. 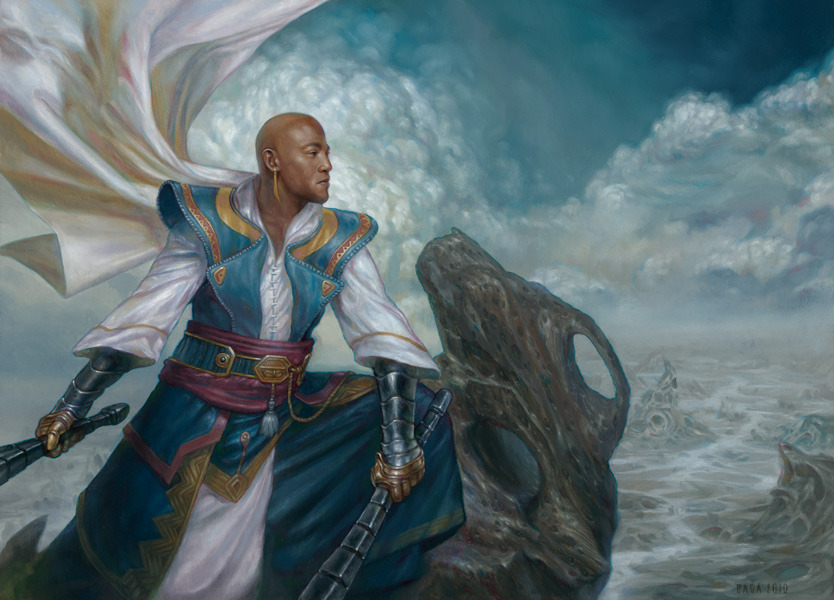 Teferi had not anticipated the apocalyptic events that would follow his departure.

Teferi and Jhoira emerged from the phased out Shiv 300 years later to discover Dominaria has become a barren wasteland, but not because of the Phyrexians. Urza had succeeded, at the cost of his own life, but the Invasion wasn't the last destructive event to strike the plane. Millennia of cataclysms, including phasing Zhalfir and Shiv from the time stream, had ripped time rifts into the fabric of Dominaria. Worse, he failed to stop the rebirth of Nicol Bolas, the Ravager, who manipulated Teferi's young protégé Venser, Shaper Savant into resurrecting him (depicted in The Eldest Reborn).

Teferi saw the solution in Radha, Heir to Keld, a young half-elf, half-Keldon with a nascent planeswalker spark. Radha was different, and using Radha's strange connection to the time rift over her homeland, he saw how to mend the rifts. Beginning with Shiv, Teferi connected to the rift and sealed it, but at the cost of his planeswalker spark.

A mortal again for the first time in a millennia, Teferi lacked the power to seal the other rifts. Even worse, the planeswalker Jeska, Warrior Adept, manipulated by evil forces, forced Radha to act as a buffer as she sealed the rifts. Before Teferi could return Zhalfir to the time stream, Jeska used Radha to seal the rift, leaving it forever beyond his mortal reach. The loss weighed heavily on his soul. Even The Mending of Dominaria causing a rebirth and rejuvenation of the plane could not assuage the depth of his guilt. 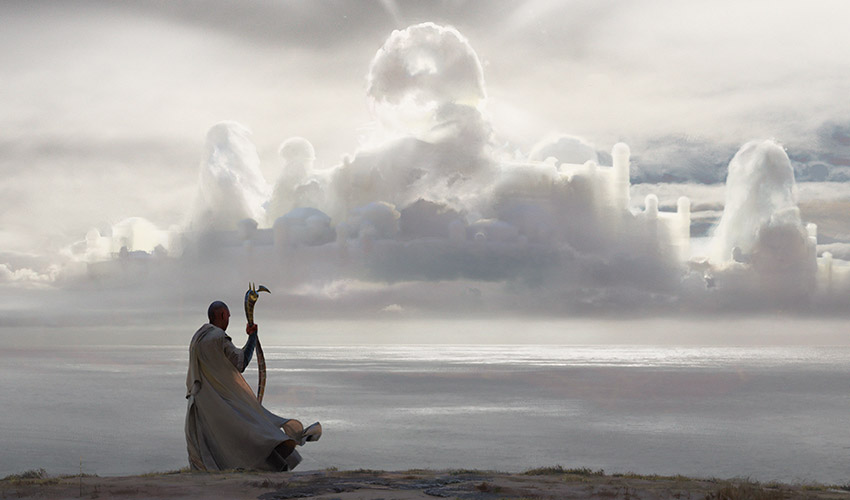 Teferi's guilt at his actions has made him the most complex and interesting oldwalker.

In the years that followed, Teferi wandered Dominaria. His legend was reviled by the people of Jamuraa as the man who destroyed Zhalfir. It wasn't until Teferi met his wife, Subira, and raised their daughter, Niambi, Faithful Healer, that his humanity would be restored. Teferi's family anchored him, and he began to heal - although he never let go of the scar of Zhalfir. Teferi pursued secrets left behind by his former mentor Urza, hoping to find a tool that might aid him restore his homeland.

Decades after the Mending, Teferi was approached by Jhoira and a group of painfully young planeswalkers calling themselves the Gatewatch. Seeing in them the heroic souls he and his friends once were, something rekindled in Teferi. Jhoira offered Teferi the return of his planeswalker spark, a heavy burden for the man Teferi had become. But his daughter, Niambi, would brook none of his waffling. She was grown, with children of her own, and with her father's aging slowed she was quickly looking the elder of the two. Teferi had a heart for adventure, and had business left unfinished. On Ravnica, Nicol Bolas was plotting an endgame that Teferi could help these young Gatewatch stop. Then, Karn - old Arty Shovelhead himself - needed aid destroying the emerging New Phyrexian scourge. Teferi owed the multiverse a debt, and those who would seek to do it harm would learn exactly what this 1,200-year-old master of time could do.