Welcome back, Lore Seekers! Strixhaven: School of Mages is right around the corner and you might have noticed that The Royal Scions are off to college! Will and Rowan Kenrith have been the stars of two different sets, but their actual story may be a bit confusing if you didn't pick up the Throne of Eldraine novella, The Wildered Quest, by Kate Elliott.

So, let's catch you up on Will and Rowan's origin and their gap year! 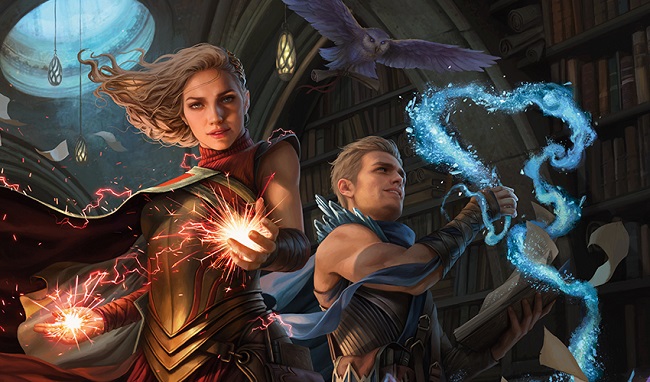 Let's start out by talking about Will and Rowan's home plane: Eldraine. Eldraine is a world divided into the orderly courts of the realm and the mysterious, dangerous, and unpredictable wilds. The five courts of the realm are typically ruled by a High King, selected once in a generation when the Questing Beast bestows a magical sword on one deemed worthy to undertake the High Quest. The twins' origin begins in an usual time: when the Questing Beast has selected two young knight hopefuls to undertake the quest.

These two hopefuls are Algenus and Linden, of Kenrith Town and Kenrith Coombe, respectively. Together and individually they undertake quests to prove their worth and earn a knighthood at each of the five courts of the realms. Only when they have achieved all five knighthoods are they worthy to sit on the throne of Castle Ardenvale as High King and/or High Queen.

Things go well at first, with both Algenus and Linden earning four of their knighthoods and bonding with each other... until Algenus disappears while questing alone in the wilds. After disappearing for months, Linden goes after him, and finds him deep in the wilds in the grip of a witch's love spell. The witch ensorcelled Algenus in order to have children she could sacrifice in the pursuit of power. Linden, who loved the man fiercely, freed him from the spell with a kiss. His ensorcellment did not sit well with Algenus, who slew the witch, leaving behind his enchanted blade lodged in the witch's body at the bottom of her well. Linden's arrival was too late to save the children.

Left without options, Linden used the power in the sword of the Questing Beast to revive the children. The magic was not designed for this, it was meant to save the life of the one undergoing the High Quest once, as a part of their quest. Nevertheless, it worked, and Linden emerged from the wilds with the Kenrith twins in her arms. Linden would not be able to finish her High Quest, but she always considered it a worthy trade.

Throne of Eldraine: The Wildered Quest 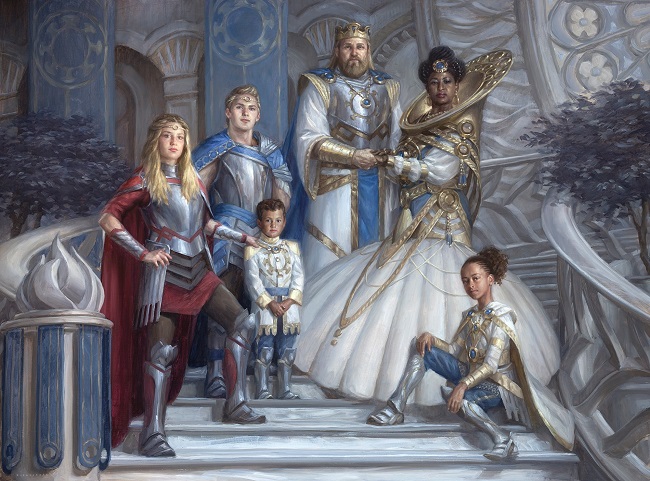 Seventeen years later, the twins have been raised by Algenus Kenrith, the Returned King and Linden, the Steadfast Queen to be exemplars of the virtues of the realm. Algenus and Linden have two more children, Hazel and young Erec, and have proved to be great parents and rulers for the realm, complementing each other's strengths and weaknesses.

The twins are on the cusp of adulthood and their own quests for knighthood, and have successfully negotiated the ability to travel with their father's annual procession around the realm, so long as they travel as humble porters with the baggage train. The twins, as teenagers are wont to do, miss the departure of the procession because they got distracted. Linden forbids them to raise the castle gate and attempt to catch up with the train on their own, but when she's called away to deal with a goblin raid on a nearby village, the twins seize their chance to sneak out.

They take a shortcut through a small patch of wilds to catch up before the procession makes camp for the night, but quickly find out why the wilds are forbidden. A horde of goblins overwhelm them, and they're only barely saved by the mysterious Oko, Thief of Crowns and his companion, an extremely large man named Dog (in reality Garruk, Cursed Huntsman under Oko's sway). Thankfully, Rowan talks amicably with Oko on the way to their destination, but Will becomes suspicious of the stranger and his companion, especially the way Oko seems to probe Rowan for information without revealing anything about himself. 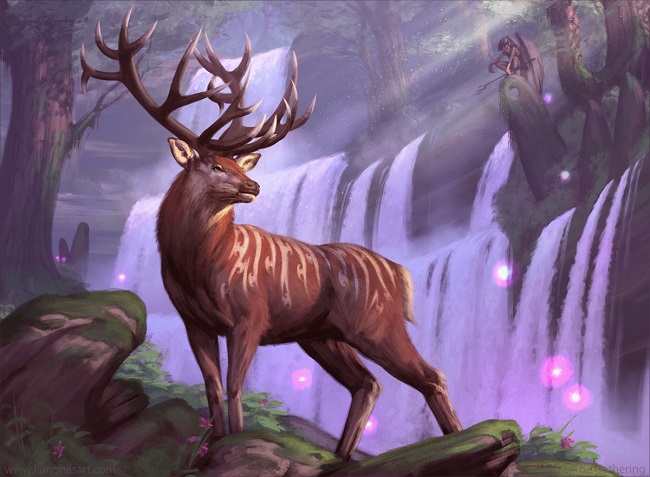 That night, the king disappears, seemingly in the company of his longtime companion Cado, but Cado has no memory of these events. Months afterward the twins finally turn eighteen, and are allowed to go on their own quest to find their father. Along with their friends and companions, they travel first to Castle Vantress to seek advice from Indrelon, The Magic Mirror. In exchange for a secret from Will, where Will shows his ability to scry mysterious places seemingly not on Eldraine, they're granted a vision of a stag in a very specific place in the wilds. With that information, the loremage Elowen is able deduce their destination. They travel to Castle Garenbrig near Wintertide, where Yorvo, Lord of Garenbrig opens the portal in The Great Henge to take them to where they need to go.

Things go badly immediately. The group is split, and childhood friend Titus is slain holding off a lich knight. They lose track of the stag, and instead stumble across a council of elves debating war with the realm, a council that includes Ayara, First of Locthwain arguing against such an action. The council is being manipulated by Oko, who notices the twins and captures the party, turning Elowen into a bird when she resists. Garruk arrives with the stag, and the twins quickly realize that Oko must have transformed their father. Oko plans to use the king/stag as the object of the midwinter hunt, sparking a war between the wilds and the realm by having the elves unwittingly kill the king. The shapeshifting trickster leaves Garruk behind to guard the group as he sets his plan into motion.

Will appeals to Garruk's humanity, and they quickly realize there's a magical artifact implanted in him. Believing removing the object will set him free from Oko's thrall, they remove what turns out to be a hedron preventing his curse from getting worse. Freed from Oko's control, but his curse worse than ever, Garruk sets out in a rage to slay Oko for what he'd done. The twins are the only ones who can follow him, with the rest of their group incapacited. They decide Garruk's hunter skills are the fastest way to find their father. On the path, Will and Garruk get knocked into a river in the wilds, and are only saved by The Cauldron of Eternity, which drinks in the energy of Garruk's curse, freeing him. 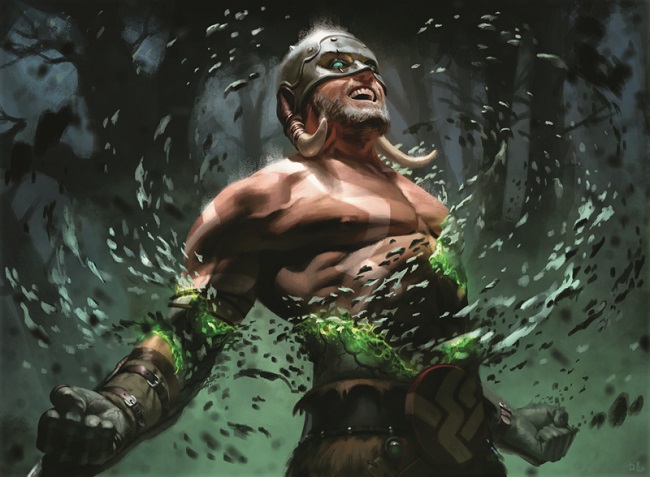 Return of the Wildspeaker by Chris Rallis

Following the elves on the hunt leads them to the stag, which has fled to an abandoned witch's cottage. Linden arrives with a small army at her back, Elowen having fetched her while in bird form, and the two sides have a face off. Oko is revealed among them, and war is averted, but Oko escapes from Garruk's wrath after a short battle. The Twins learn the truth of their origin, which had been kept from them, as they discover this was their biological mother's cottage. Learning the truth in such a harsh way after rescuing their father causes both twins to planeswalk away, their strange shared spark igniting in the moment of confusion and hurt.

In the aftermath, Garruk vows to ensure their safety to the king and queen.

Following their battle with Oko, and wanting to master their abilities before challenging a being like Oko again, the twins travel to the plane of Kylem to compete at Valor's Reach. Battlebond didn't have a story, and although this is the set where the Kenrith twins were first introduced, Eldraine actually takes place before it.

And that's where we left off with the Kenrith Twins! Why have them come to Strixhaven? What's going on in their lives? You'll have to wait and see as the Strixhaven story comes out!