Core Set 2021 is upon us, and after I talked about The Life of Teferi last month, I thought it time to talk some more about one of the lesser known Magic eras: The Mirage War. The Mirage War was the subject of the sets Mirage and Visions (although Weatherlight was part of the Mirage block, it wasn't part of the same story). Mirage was a weird set for Magic, as both design and creative moved internal to the company. You can read a little about it in Bill Rose's article A Three Year Mirage. What's important to note is that the set was not a top down design, and it seems that it was only after it was complete that it was given a flavor by then Art Director Sue Ann Harkey.

One thing that can't go without noting is that it's fairly clear that Jamuraa, Magic's only defined African Fantasy setting, was created entirely by white people. If we return to Dominaria again in a serious way, I'd like to see the setting reshaped by Black and African creatives. 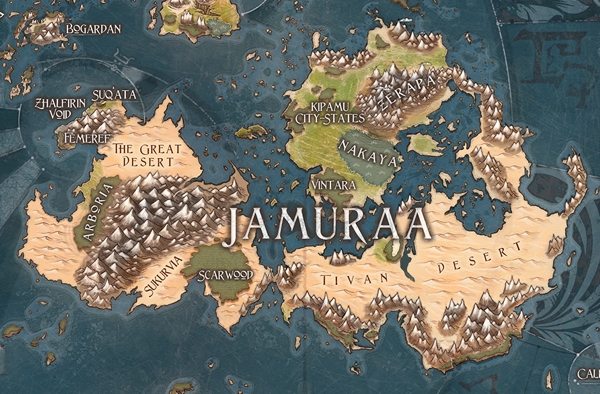 Ethan Fleischer did a massive amount of work making the map of Dominaria.

Jamuura is the enormous central continent of Dominaria, and isn't the subject of very many Magic stories despite being such a large place. It is divided pretty neatly into north-west (what we're looking at today), north-east (where Prophecy takes place), south-west (the subject of the Legends cycle), and south-east (just a big 'ol desert). The north west is what most people think of when they hear Jamuraa, and it's where the Mirage War took place. Note the large island north of the Great Desert (Corondor) and Bogarden to the north west of Suq'Ata. They'll be important soon.

I talk in detail about Jamuraa in my Travel Guide to Dominaria if you want to know more. 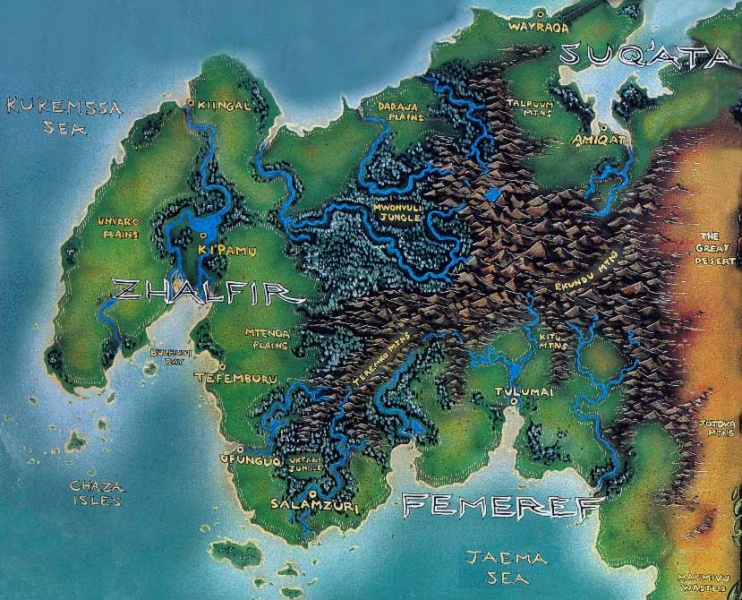 This early map of Jamuraa was the product of Pete Venters and Tom Wänerstrand.

The predominant nation of this section of Jamuraa is Zhalfir, one of the most prosperous and magically and technologically advanced nations on Dominaria. Zhalfir had a wealth of natural resources and mana to draw upon, a large standing army of Askari knights. The orders of Askari were led by a Sidar, a title for the general of a warclan. The country itself is ruled by a king or queen, with power resting in various noble families. Teferi introduced five guilds of magic to the country in order to quell civil strife that had plagued the country for years: the Civic Guild, the Shaper Guild, the Shadow Guild, the Armorer Guild, and the Granger Guild.

While the exact roles aren't easily spelled out anywhere (that I can find at least - most of the resources are lost to time), we can infer from the relevant Guildmage flavor text what each does. The Granger Guild ensures no one goes hungry in Zhalfir, the Armorers control the weapons trade, the Civic Guild acts like a judiciary, while the Shapers innovate (or spy, it's not clear based on the art and flavor). The last guild, the Shadow guild, is the most contentious of the five. Given domain over Zhalfir's dead, their creation caused a schism in Zhalfir's religious community.

Femeref is what emerged from this schism, after seceding from Zhalfir in protest and forming their own theocratic government. Religion in this region of Zhalfir revolves around a variant of sun worship, although whether that belief is in a personified sun god or merely in the life-giving power of the sun isn't clear. With control of the riches of the mountains (and the aid of the dwarves mining them), Femeref quickly prospered and carved out their own niche.

Suq'Ata is a harder nation to explain. During this period of Magic's history, magic portals between planes were fairly commonplace in the story. This region had multiple portals between Rabiah, Dominaria, and a plane called Wildfire. Rabians emigrated through these portals, and Suq'Ata was founded by their descendants, hence the Arab influence of the names and architecture. The Suq'Atans are a merchant nation that has largely forgotten it's interplanar origins.

Worth mentioning as well, although not one of the big three nations, are the Talruum Mountains, home to the famous Talruum Minotaur, and the Great Desert, home to viashino and dragons. Both of which would play a small role in the war.

The Story of the Mirage War 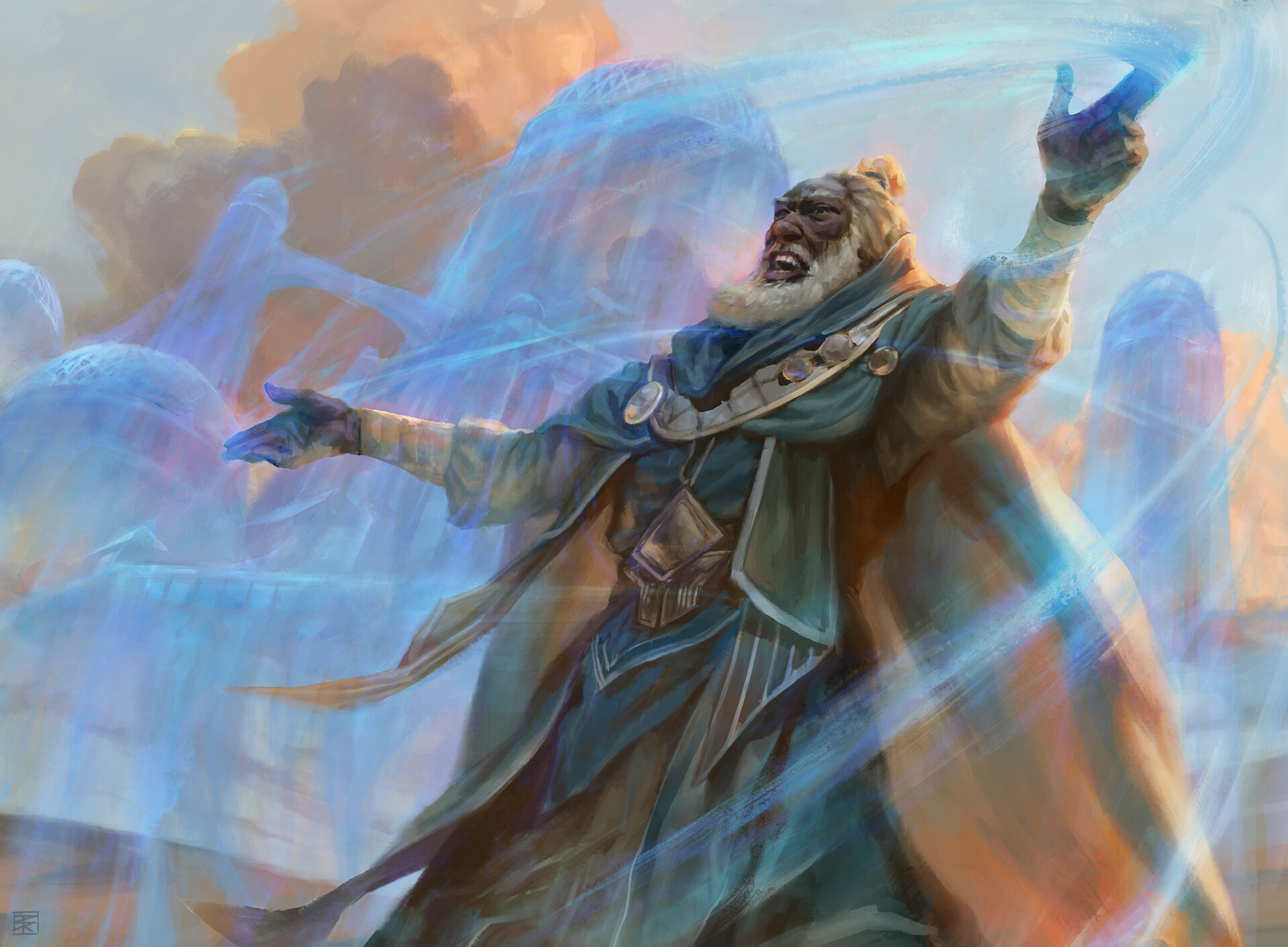 Historian of Zhalfir by Denman Rooke

The story of Mirage and Visions are told through two summary articles lost to the internet (but thankfully not to the wayback machine) as well as a character profile and a lot of tie-in flavor that isn't about the main plot. Most interestingly, there was also a Choose Your Own Adventure style game for Mirage. I'm going to summarize the main plot here, as it's actually a pretty complex story involving a lot of characters that you don't necessarily need to know about.

Between Teferi's time at the Tolarian Academy as a young man, and when he phased out Zhalfir, Teferi was a royal mage of his homeland, Zhalfir. But he grew bored of the petty politics and retreated to his own island to conduct his own magical experiments into time. Teferi was more successful than he could have imagined, accidentally phasing out everything from his island and leaving behind only a barren rock.

The energy unleashed by Teferi's accidental magic attracted three nearby mages of vast power. From Corondor to the north came Mangara, the Diplomat, a peacemaker known for his wit and charisma. From the Burning Isles came Kaervek the Spiteful, a man with dreams of conquest stymied by the powerful forces that call the Burning Isles home. From the Mwonvuli Forest in Zhalfir came Jolrael, Mwonvuli Recluse, a former royal mage of Zhalfir who, like Teferi, tired of politics and retreated into the jungle. The three mages realized that alone, none of them could overpower the other two, and agreed to a truce.

Mangara quickly became a hero in Jamuraa, ushering in a new age of peace and prosperity by ending a war between the three nations in the northwest. This age of peace would become known as Mangara's Harmony. In harmony, Kaervek saw his opportunity. Mangara had backed his peace through an alliance with elves from Corondor, who served as peacekeepers. Kaervek convinced Jolrael that this was a precursor to an invasion, and manipulated her into setting a trap for Mangara. Together they trapped him in a prison of amber, and Kaervek almost immediately launched an invasion from the Burning Isles to the west, while taking control of Jolrael's Viashino and Dragon allies from the east. Jolrael quickly realized she had been fooled and betrayed, but Kaervek had warded the amber prison against her interference and placed his forces in the heart of her forest to keep her in line.

When Teferi's island phased back, Jolrael reached him first. Teferi could not rescue Mangara himself, his phasing mishap had damaged the fabric of time and he was needed on his isle to repair it. But he could use his power to gather the heroes of Jamuraa and send them to Jolrael's palace to rescue Mangara while he and Jolrael ambushed Kaervek. Returning home, Jolrael found Kaervek summoning his armada to invade Teferi's isle and seize the power there for himself. As his flotilla approached the island, Jolrael surprised him and grievously wounded him while Teferi wiped out his fleet. Kaervek slunk away to a nearby swamp to use the magic there to recover, but Teferi's heroes - led by Captain Sisay of the Weatherlight - had freed Mangara already. Mangara confronted Kaervek and imprisoned him in the Amber Prison, ending the war.

This is the last piece of Core Set 2021 content from me, and next time I'll be looking forward at our third return to Zendikar! The next few months will be a significant milestone for me, as I first began writing about Magic's lore five years ago for Battle for Zendikar. I'll be talking about my experience going from story forum moderator to author of an official Magic art book!