Welcome back, Lore Seekers, to the Flavor Gems of Innistrad: Midnight Hunt. It's been five years since we last visited the plane, and a decade since our first visit. What's new? Well, lots of things! You can read all about old Innistrad lore in Preparing for Innistrad: Midnight Hunt, and you can get a quick update in the Planeswalker's Guide to Innistrad Midnight Hunt. I'm trying something a bit different with Midnight Hunt, since this is our third return. Rather than simply pointing out easter eggs, I'm going to talk a bit more about the cool design changes you see, and then dive into the cool horror movie references. With that out of the way, let's dive in. 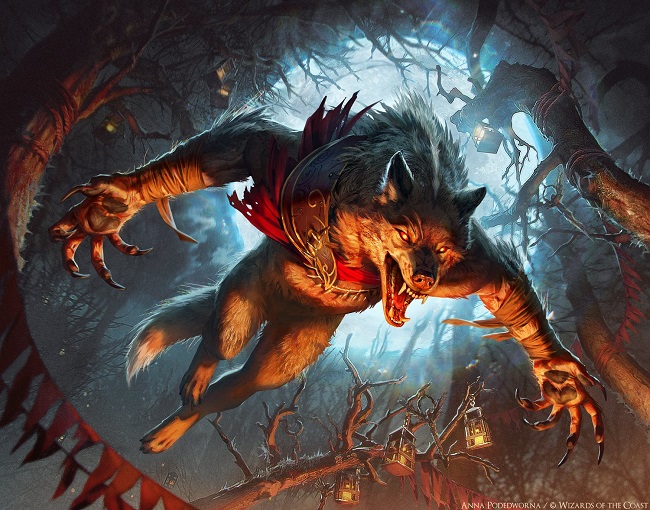 Since I've been asked this a lot elsewhere, I should mention that "The Travails", the term for the Shadows Over Innistrad block, took place two years ago in-world. War of the Spark was about a year after SOI, which makes this set about a year after WAR.

The coolest new flavor element of Innistrad: Midnight Hunt is how it leans so hard into Samhain, or Halloween. In the same way the Christian Halloween supplanted the Pagan Samhain, we're seeing the Harvesttide Festival reappearing as the power of the Church of Avacyn wanes. The set is chock full of people turning to ancient hedge magics and cults to replace the power of the Church, but the focus is Harvesttide. 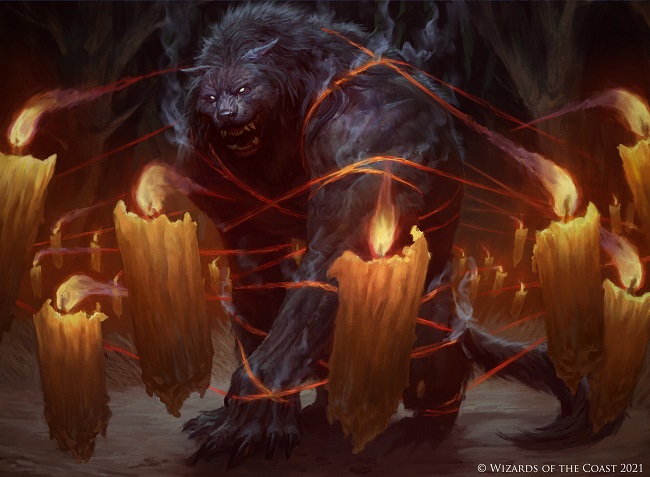 Replacing the omnipresence of Avacyn's Collar (the symbol of her church), we see tons of candles as a visual motif for the witch's magic all over the set. The bright candles provide a nice contrast to the wan, gloomy Innistrad and give a feeling of new hope in the darkness. It looks great! 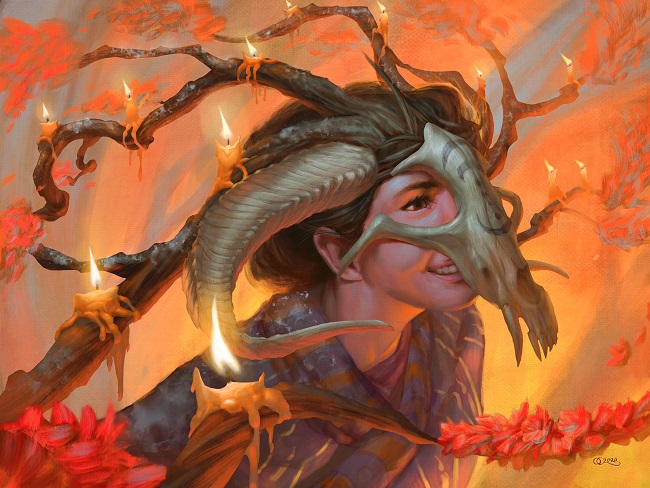 Anyone familiar with Halloween will know that costumes are a big part of it. For the Harvesttide Festival, masks lend power to the rituals being performed and are used to scare away evil spirits in the same way they were for Halloween traditionally.

Jack-O'-Lanterns, or carved pumpkins with lights inside, are another fun visual motif in Midnight Hunt. They're bright but spooky at the same time. I especially love Jack-O'-Lantern itself watching over a bunch of pumpkin pies!

Midnight Hunt is rife with horror film references this time around, while I'm sure I won't be getting them all, here's a fun sample of the best references. While the original Innistrad leaned into Gothic Horror tropes and classic movie monsters, and Shadows Over Innistrad went into the Cosmic Horror arena, Midnight Hunt is solidly home to Mid-20th Century horror! Lots of 50s era horror films here. 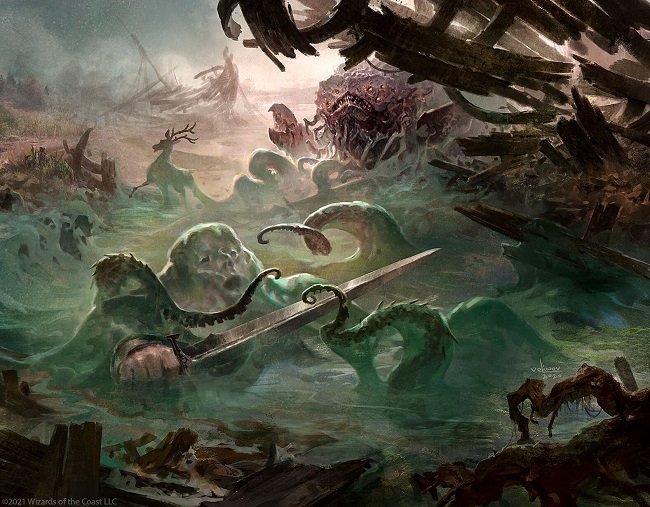 The classic 50's b-movie The Blob is the source of a lot of ooze-style horror in DnD and later Magic. It's great to see more explicit references here, including Magic's own "The Blob" Legend!

Another 50's classic b-movie is Them!, a film about giant irradiated ants that overrun a small town. Giant insects like this are a popular b-movie theme, but it's cool to see the nod here to Them! specifically.

Card References: Rise of the Ants

Some of the flavor text in Midnight Hunt indicates that necroalchemists have gained some respectability because of how useful they were with their geist-equipment against the Eldrazi. We see a few examples of this moving into pretty Ghostbusters-y territory in the set, which is awesome. 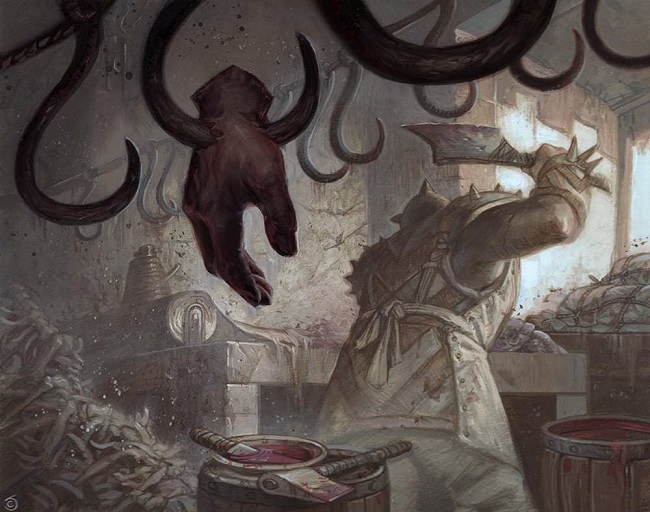 The Meathook Massacre by Chris Seaman

We also get a few references to more modern slasher horror. The Meathook Massacre is an obvious explicit reference to the Texas Chainsaw Massacre film, while other cards show human serial killers.

Delver of Secrets hails from the original Innistrad block, but the modern incarnation is far more Cronenberg, looking a lot more like the special effects of the 1986 classic. The film was based on a 1950s horror short story, which brings us right back to the 50's horror references.

The actual history of wicker men is somewhat questionable, but the building of giant effigies for pagan rituals, usually involving human sacrifice, is a popular trope for horror movies, especially folk horror. 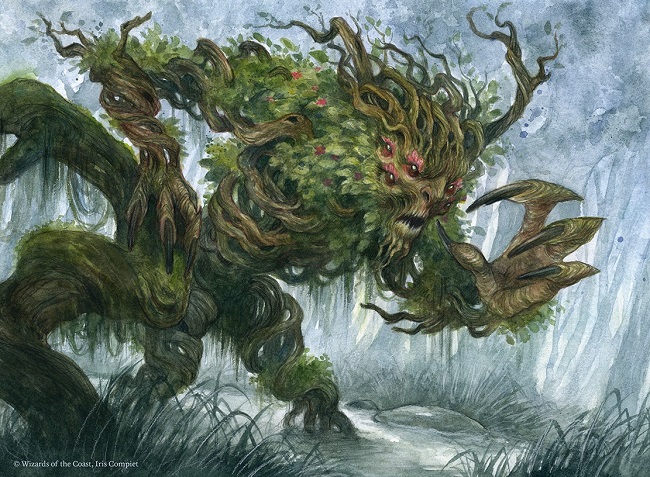 We also get a number of cryptid-style horrors, that is bizarre, reclusive, and mytholigized animals. Shadowbeast Sighting is basically a bigfoot sighting reference, down to the 'blurry photo'.

Haunted, creepy dolls and puppets are an entire genre onto themselves, rather than a single reference. From Talking Tina in the Twilight Zone, to Chucky, to Annabelle (and Slappy from Goosebumps, I guess), taking advantage of the uncanny valley dolls can fall into is a real horror mainstay.

Similar to dolls, Haunted Mirrors are another big horror mainstay, from Candyman to the Amityville Horror's mirror to the sheer number of horror films riffing on the title "Mirror". Many urban legends (like that of Bloody Mary) arise from the idea that mirrors are some kind of supernatural window.

Haunted houses are another insanely popular horror trope, although the Hostile Hostel // Creeping Inn makes me think more The Shining over any of the thousands of haunted house movies. Mystic Skull // Mystic Monstrosity, meanwhile, has some Evil Dead 2 vibes. This is a genre with a long history, and it's awesome to see all these tropes explored more fully.

Vanquish the Horde and Odric's Outrider are both references to Odric, Master Tactician, who doesn't actually get a card in Midnight Hunt. Odric's faith was shattered last time we were on Innistrad, but we see him going strong again here.

Startle is a great Jump Scare card! The key to many good horror movies are those sudden scares that make you jump out of your seat in terror! 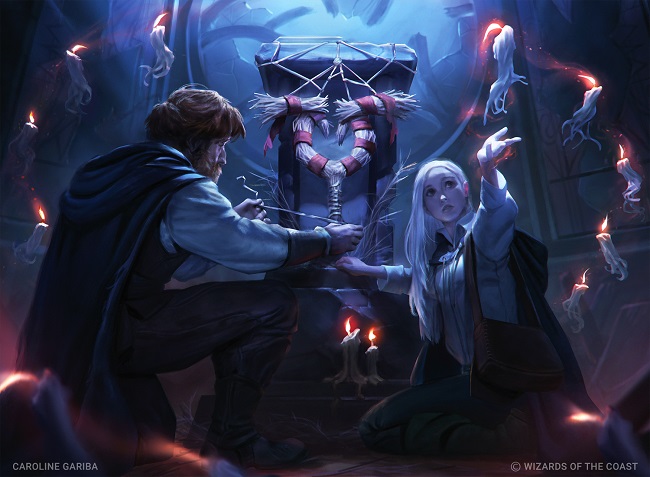 Champion of the Perished is an obvious reference to the classic Innistrad card. Champion of the Parish. Meanwhile, Faithful Mending is a clear counterpart to Faithless Looting.

Croaking Counterpart is exactly the kind of whimsy I want to see in even horror-related Magic sets. A frog cathar is adorable and bizarre in a way that I think fits in the witchy themed Midnight Hunt. Can't Stay Away is another kind of whimsy, showcasing a cat that has used up its Nine Lives. Oh, and speaking of humor, Rotten Reunion turns American Gothic into Gothic Horror.

Bloodthirsty Adversary and Voldaren Ambusher are both examples of vampires' sudden use of crossbows. Given the resurgence of werewolves in this set, it's no surprise that they'd want to defend themselves against the suddenly much stronger opponents. 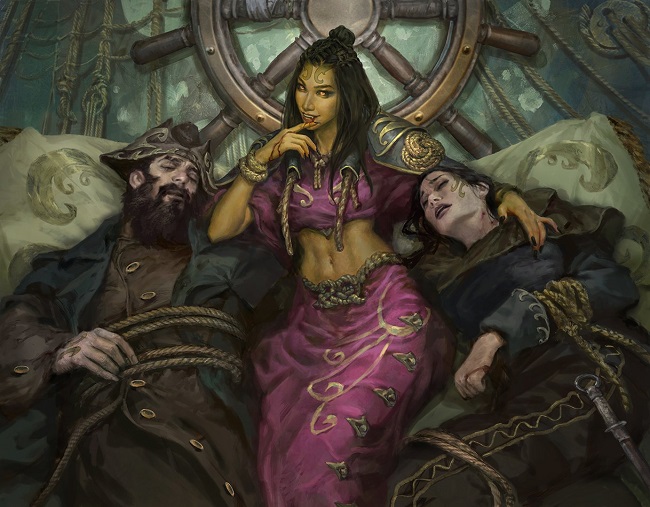 I'm going to leave with some thoughts on Siphon Insight. Previous Innistrad blocks have hinted at cultures across the sea from known Innistrad, and the vampire's garb we see here (which looks like a bedleh), is clearly not something we've seen before on Innistrad. Even though the outfit has the Nephalian sea cult logo stitched in along her hip (a recognizable symbol from SOI block), it's clear we're finally seeing the influence of other cultures on Nephalia. I hope that continues in Crimson Vow!