Modern is likely one of the most popular Constructed tournament formats Magic has had to date. It constantly sells out events and breaks viewer numbers for broadcasted paper events. In the span of just a couple of years, it moved from being a side event after thought on the SCG Tour to being the most used format for their events.

In my opinion, the reasons for Modern's success come from a few different places. First is the fact that people love non-rotating formats. There is something special about having a deck that is "yours": an archetype that you latch onto because of a favorite card or play pattern; that you always enjoy when you shuffle it up; or that you know the ins and outs of better than most people and are always excited to see if a new set has new tools for it. In a non-rotating format, when you find a deck like this, you can often stick with that deck forever. You can take breaks from Magic and come back later knowing you can pick back up where you left off.

The second reason for Modern's recent success is that it was the most reasonable alternative while Standard was bad in recent years. I often describe Magic not as one game, but as a "rules engine" that powers many different games and formats. When players stop enjoying one part of Magic, there are plenty of others to give a chance to for a change of pace. While it's far from being "cheap", Modern was definitely the most reasonable constructive alternative in terms of both price and the number of competitive events offered for the format.

The last reason I feel contributes to Modern's popularity is the deck diversity that we constantly see in the format at even the highest levels of play. Take this past weekend's results for example. We had the SCG Invitational, a Modern Grand Prix, and a team Modern Grand Prix. Just looking at the top finishes from these three events, there were over 20 distinct archetypes that put up finishes: 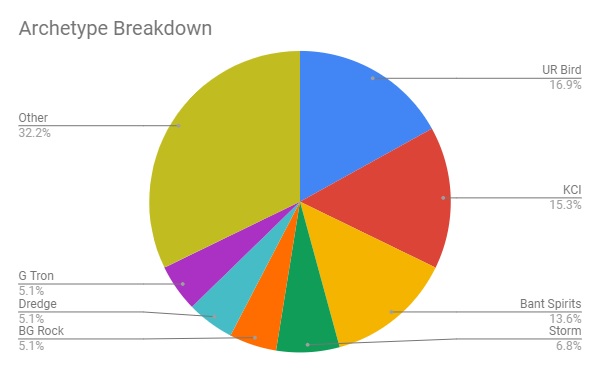 While there are a lot of unique decks present in Modern, there are also a lot of parallels we can draw between these decks. For instance, what does this past weekend's deck data look like if we group decks based on how quickly they can win the game? 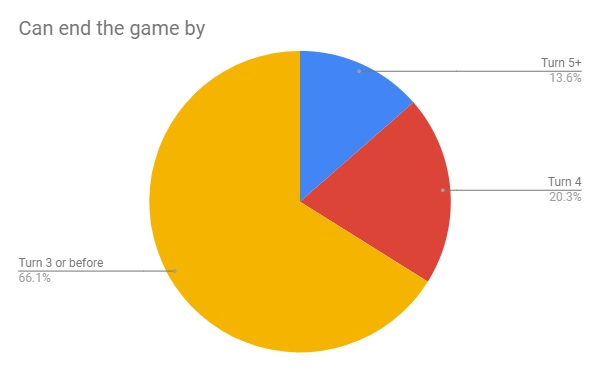 Whew! So much for Modern being a "turn four" format. I have often said Modern is a format about brutal efficiency, and the top decks from this weekend seem to be in line with this idea. Nearly 2/3rds of them are capable of winning the game by the third turn (or in some cases sooner). Past this large chunk of decks, another 1/5th of the decks can present lethal by turn four, which means less than 15% of the successful decks from this past weekend are interested in playing a game that goes to turn five and later.

Another interesting metric we can group the data by is the 1 mana card selection the different decks have access to. Specifically, Faithless Looting and Ancient Stirrings are the most powerful card selection in the forma,t and we see them present in over half the top finishing decks from this past weekend: 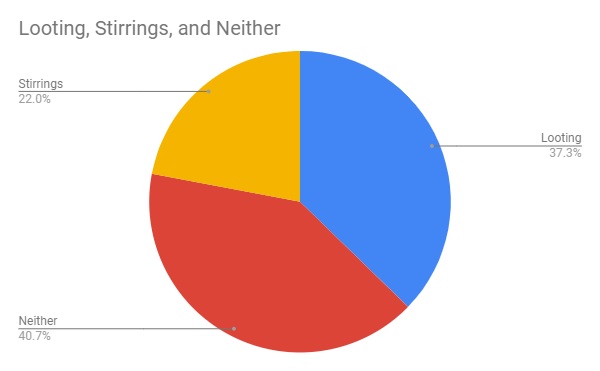 People often ask me what I would change about Modern as a format. My opinions have gone in a variety of different directions about this over the years. For a long time, I campaigned to make Modern fair again, to ban things that broke that "turn four" rule that was loosely defined. Today, I do not think this is still a good choice. There are just so many decks that break this rule that reigning in all of them would drastically change the Modern format that so many like.

That being said, I would still change some things. Rather than try to stop the degeneracy that exists in the format, I would simply like to unban things that were deemed too powerful in eras past. The Modern we play today is far more brutal than when Splinter Twin was banned. It is far more efficient than when Birthing Pod was banned. It has far more maindeckable answers to artifacts than the Standard format that Stoneforge Mystic was too powerful in.

For the record, I do not think Twin, Pod, or SFM are bad cards. In fact, I would expect all three of them to slot into decks that are competitive in Modern. That being said, I do not think these cards are head and shoulders above the other things that exist in the format now. I often hear people talk about how degenerate these cards are, but are they really more degenerate than the 66% of decks that were killing people on turn three in last weekend's events? Heck! Is anything more degenerate than watching KCI try to combo for 10 minutes and winning through early graveyard hate?

Modern is a format that people love because it lets them play with cards that they love. It is a format where for every person you can find who loves something, you can find a dozen others who hate it (or in Tron's case, thousands of others). It should be a place where the goal is to have as many different and powerful strategies be legal.

For people who want a fairer format that is not Standard, I think we will likely find this in Wizard's new non-rotating format that was recently referred to as "Standard Plus". For those unfamiliar, this has been hinted at several times in relation to Magic Arena. Players are going to need something to do with their cards next Fall when they rotate out of Standard and Magic is definitely ready for a new format with how large Modern is today. There are several possible starting points for this new format, but I think one of the following is the most likely:

The first possibly makes the most sense from a thematic stand point. The set is called "Origins" and could possibly lead to the new format being called this as well. The reason I would be surprised if this was the starting point though is because of how much backlog of sets it would require adding to Magic Arena. While obviously not impossible, it would require a good amount of sets to be coded and tested by next Fall when a new format would be needed on Arena.

I think Shadows Over Innistrad is one of the two most likely starting points for this new format. It would require minimal additions to Arena in terms of sets and it would include cards from Innistrad, which is arguably one of Magic's most popular planes. The power level of the cards in this set might be enough to keep energy from running rampant, but if that proves to not be the case, a few key bannings could solve things most likely.

Kaladesh is another possible starting point, but for one of the worst possible reasons: The cards are already coded on Arena, so might as well use them. Without a deep card pool to balance out the potential power of energy, I do not think this would make for a great format. I think it would likely require a number of key bannings to be interesting and worthwhile. Of all the possible starting points I have listed here, I really hope this one is not it.

The last option, and the other of my two favorites, is simply starting with the current Standard format we have now. This Standard format is the best we have had in a long time (ever?) and I think this is likely in large part to the play design team working on it. If a new format existed purely with cards that play design have helped balance, it would likely be a fantastic format that would need minimal management via a banned list.

What do you think about the current state of Modern? Do you like how brutal and efficient the format has become or would you prefer things to slow down a bit? Are you excited for a new non-rotating format to come around at some point and if so, where would you like it to start and why?