Weâre back with another look at new Masterpieces, this time for Hour of Devastation. Iâm going to take a look at some new ones and recap some of the old ones and show trends going forward. Buckle up because this is probably going to be the last time Iâm going to discuss them since they wonât be in every set going forward.

The Zendikar Expeditions were the first and most sought after masterpiece edition. They were also the most overpriced set by a large margin. Stores and players didnât really know how rare they may be and they were initially priced prohibitively high. How do they look now? Letâs take a look a the flagship from that set, Scalding Tarn. 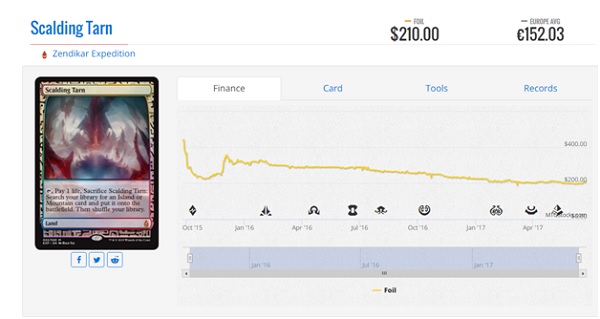 Well after the initial crash from an exorbitant amount (over $400!) itâs settled at a âreasonableâ $210 and continues to slowly fall. Part of this is likely due to the reprint of Scalding Tarn in Modern Masters 2017 but that doesnât tell the whole story. Battle for Zendikar was probably the most widely opened set of all time due to the frequency of Masterpieces. Lands continue to be king and these will likely continue to hold value, but the slow creep downward suggests that more were opened than people actually desire at that price point. Eventually, I expect all of the expeditions to bottom out and start to trend upward. While they are not specifically on the reserve list, these versions of the lands basically are pseudo reserve list cards.

These Masterpieces started at a much more realistic pre-order price and a few of them have already bottomed out and started to trend up. Aether Revolt Masterpieces are the first ones to be disappearing. 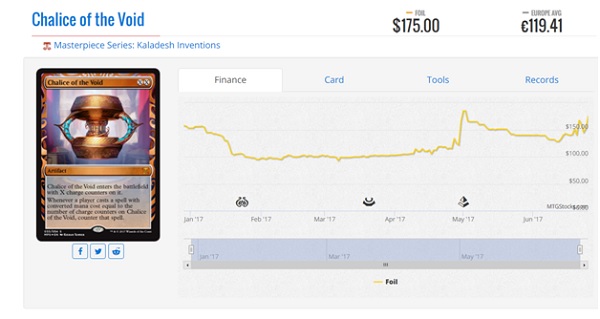 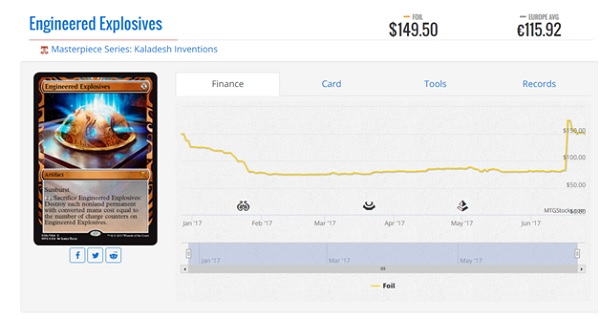 Chalice of the Void and Engineered Explosives have been targeted by buyouts because of their low supply and really havenât started to recover. While I donât condone buying cards out, this isnât likely to throw organic demand off by a lot. Aether Revolt was not opened enough, as we can see by the price of Fatal Push. There are just not a ton of these cards in the cases and inventories of stores. Weâve been opening Amonkhet for the last 3 months and at this point there is unlikely to really be any more supply. From here I would not be surprised if more of the Aether Revolt Masterpieces started to jump. I would keep a close eye on Arcbound Ravager, Extraplanar Lens, Oblivion Stone, Paradox Engine, Pithing Needle, Planar Bridge, Staff of Domination, and Wurmcoil Engine if youâre intending to collect any of them. Those I think are the closest to seeing large price corrections. 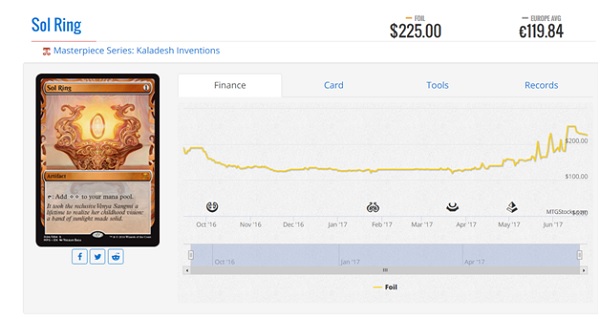 Sol Ring has shown us that itâs possible that Kaladesh Masterpieces are also hitting their bottom and starting to trend up. As is the case with most fall sets, Kaladesh was opened a lot more than Aether Revolt and there should be more supply of those inventions. What is clear though is that some of them are starting to tick up very innocuously. 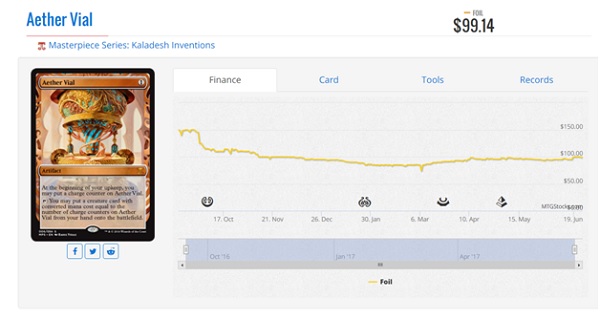 If someone asks why Aether Vial spikes in the next month, Iâm going to show them this graph. This card is trending up and supply will continue to drop until someone decides to buy them all. Itâs slow and not very noticeable, but I would be extremely surprised if this card was less than it is now at the end of the year.

If you read my last article about Masterpieces, you will notice that I said that it was likely all of these would go down in price; and, for the most part, that was true. My pricing tier was close and Force of Will can be found for as low as $180 retail! I didnât realize how much people would dislike these frames but I didnât think it would be that bad! Weâve definitely not reached the bottom for the prices of these Masterpieces until we start drafting Ixalan. If youâre interested in buying some of them, my advice is to continue to wait.

There are a bunch of different âclassesâ I would put these masterpieces into. Desirability, playability, and frequency are the biggest factors that drive the price of masterpieces. Previously I said the absolute floor is $20, but Divert has continued to be impressively sluggish. Iâm not sure who that card was for but they donât really want it. Amonket currently holds the record for the cheapest masterpiece, but I think Hour of Devastation has some that could break that record. Trying to guess exact prices is probably a lost cause, but I would like to group them in terms of playability and expected future value.

What to Expect in the Future

This set has some really unexciting Masterpieces. I think we might have a race for the worst Masterpiece between Choke, Boil, Divert, and Diabolic Edict. I donât know who the eventual loser is going to be (itâs probably Divert), but this is obviously part of the reason that Wizards of the Coast decided to stop including Masterpieces in every set. I am open to the thoughts that they may return periodically, but I think itâs in everyoneâs best interest to reduce them. The unfortunate part of this is that Standard legal cards are likely to start to become more expensive. As you can see from Eldritch Moon, sets that donât have Masterpieces have much more expensive mythics.

If you want to own Zendikar Expeditions, I wouldnât fault you for continuing to wait. If you want Kaladesh Inventions, your window for getting them cheaply is rapidly closing. Amonkhet Invocations havenât reached max supply yet; but, when they do, they will likely be some of the cheapest Masterpieces of all time. Eventually they may find a cult following and become more unique with increased demand due to the novelty.