What happens when what you kill just won't stay dead?

Last week I took a look at the new Orzhov mechanic afterlife and how it may affect Standard going forward. This week however, I've pulled a few strings and have something far better. Gold has been promised, familial debts guaranteed, and I've given myself to the Syndicate; in return, they have gifted me with a special preview card (for nothing more than the low price of my soul, of course). 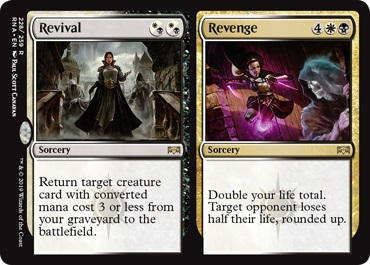 The Orzhov entry into the rare hybrid/gold split card cycle (known for such hits as Find // Finality and Expansion // Explosion), Revival // Revenge plays right into the Orzhov themes of life and death. While thematically connected, mechanically the sides don't offer a ton of overlap. Thankfully, Revival works so well with the afterlife mechanic that we can look at Revenge as more of a bonus than anything else.

The latest in a long line of mini-reanimation spells, Revival compares favorably to all of them except the original Unearth, which is powerful enough to have seen Legacy play. On the surface these smaller reanimation spells don't make a ton of sense. If you're going to go through the trouble of bringing something back from the graveyard, why not make it something huge? The upside of course is that Revival and friends cost one or two mana, not four or five.

Because you get the effect at such a low cost, the effect is primarily used for value and selection. If we are able to recur great value creatures over and over again, we can keep gaining their advantage repeatedly, and as the game goes longer and we have more and more cards in our graveyard, we can pick and choose the ones we want to get back.

And when it comes to getting value out of small creatures, the Orzhov understand that the afterlife is just the next step.

We're barely halfway into our Ravnica Allegiance previews but we already have a number of good afterlife creatures. Like Hunted Witness and friends before them these cards overflowing with value. A card like Tithe Taker is an already reasonable 2-drop that is difficult to kill without losing value, while Ministrant of Obligation is like a Lingering Souls that only needs to be cast once. When your opponent finally deals with them, you get to just get them back with Revival for another go around!

Orzhov also plays well with a number of tools we already have available to us in Standard.

I've been using the Plaguecrafter and Midnight Reaper duo in many of my decks in Standard, from Rakdos Midrange to Golgari Dredge, and once again it stands to shine. It's not hard to see why Plaguecrafter plays so well with afterlife, as well as the pseudo-afterlife of Hunted Witness, and having the ability to recur a powerful removal effect over and over again is awesome. Whether you're casting Revival on the creature you sacrificed to Plaguecrafter or the Plaguecrafter itself, good things are happening.

Midnight Reaper keeps the cards flowing, being a must for any grindy Black creature deck. One of the worries that decks based around small creatures have is that they will run out of gas once the midgame comes and our opponents start casting bigger and more powerful spells, but Midnight Reaper ensures a steady flow of threats. Furthermore, it is fantastic against removal spells and mass removal, something that can trouble decks full of creatures.

Sometimes are opponents will not be cooperating however, meaning it would be nice to have ways to put our creatures in the graveyard without their help. Stitcher's Supplier is one of the most efficient graveyard fillers ever printed and loves to die, making sure that Revival and Gruesome Menagerie have plenty of targets.

Pitiless Pontiff serves an even better role, allowing for excellent defense and offense to be played. It's extremely hard to attack into or block Pitiless Pontiff when you've got some adequate fodder creatures in play, allowing it to pick whatever role works best. Furthermore, Pitiless Pontiff does a fantastic job of keeping your creatures out of exile. Your opponent may try to use cards like Lava Coil and Conclave Tribunal to deny you your afterlife triggers and graveyard shenanigans; Pitiless Pontiff isn't having any of it.

Of course if Revival is the main course, Gruesome Menagerie feels like the triple chocolate cake desert at the end.

Any deck built around Revival and value creatures is going to be a natural home for the powerful five mana sorcery, which ends up feeling like a one-sided Patriarch's Bidding. With at least creatures at each converted mana cost, Gruesome Menagerie will almost always be cast for the full amount, and with so many enters the battlefield and death triggers it's likely to gain a metric ton of value in the process. Just imagine casting this after a Deafening Clarion or Cleansing Nova, undoing all of your opponent's hard work.

Gruesome Menagerie is a powerful card that needs a specific set of circumstances to be good; The Orzhov Syndicate is exactly the circumstance it was looking for.

So where does all of this leave us? How about a first draft:

We round the deck out with a few new Orzhov toys both old and new.

Kaya's Wrath is the first four mana Wrath of God variant printed in a long time and while it may seem odd in a deck full of creatures it actually synergizes quite well. Not only will we be gaining some life, getting some great afterlife/death triggers, and be able to return some of the creatures to the battlefield right after, we'll also likely be able to keep our indestructible Pitiless Pontiff as well.

Teysa Karlov may end up being a win more card, but she has a fairly durable body and is a huge boon to death triggers making her a nice top end. Furthermore, giving our flying tokens lifelink and vigilance is very big game. Her only real downside is we can't return her with Revival. Lastly we have an old classic in Mortify to round out our removal suite and tag occasional enchantments that may be exiling our creatures.

Many Lives To Give

Realistically, the Revenge half of Revival // Revenge will not be cast very often. It just doesn't do enough at any point for the cost. If you're losing, your life total is likely to be low, and gaining six to twelve life for six mana is not okay. Furthermore, an awkward six mana burn spell isn't really doing a ton, and the fact that it can never actually kill someone is further damning.

Thankfully, Revenge is just a toss in to the main course.

Revival is a perfectly on theme tool for Orzhov decks, giving them double access to their death triggers as well as their selection of the tools they want in later games. It's possible you want to go ever further with adding Golgari and their undergrowth shenanigans to the mix as well, but that brewing rabbit hole goes far further than today's article.

Make no mistake though; Orzhov and afterlife are all about value, and Revival // Revenge is here to keep the train rolling!